CAD Down on Lower Oil, other Currencies Little Changed 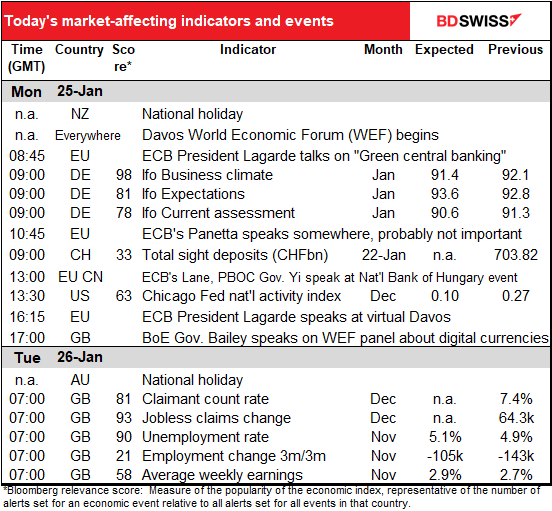 Small small movements in the FX market Friday, matching the small small movements in the stock markets – the S&P 500 “plunged” 0.30% while the NASDAQ “soared” 0.09%. Asian markets are doing better this morning, with most markets up, some substantially – the Hang Seng is 1.9% at the time of writing, the KOSPI 2.2%. (Jakarta though is -1.4%.). Stocks won’t be so quiet this week though as it’s the first big week for earnings this year — there are some 122 S&P 500 companies reporting this week, including Apple, Tesla and Facebook on Wednesday.

CAD came out on the bottom. It followed oil prices for much of Friday, but didn’t seem to benefit that much when oil started to recover. Oil was hit by the surprising large rise in US inventories announced on Friday – the market had been expecting a decline of 1.7mn barrels, but instead there was a rise of 4.4mn. This was even bigger than the 2.6mn rise that the American Petroleum Institute (API) reported. Oops!

At the same time I’m mystified about why NZD is on top of the list – in fact the only thing I can find on Bloomberg is an explanation for why AUD is outperforming NZD, even though a graph of AUD/NZD shows that that’s just not happening. For what it’s worth, Australia’s most-populous state of New South Wales had no locally transmitted virus cases for a seventh straight day, while NZ reported its first case of the coronavirus in the community in two months. Both countries have astonishingly low numbers of cases – Australia, with 24.9mn people, had an average of eight new cases a day over the last week, while NZ, with 4.9mn people, had four (apparently most of whom are visitors). 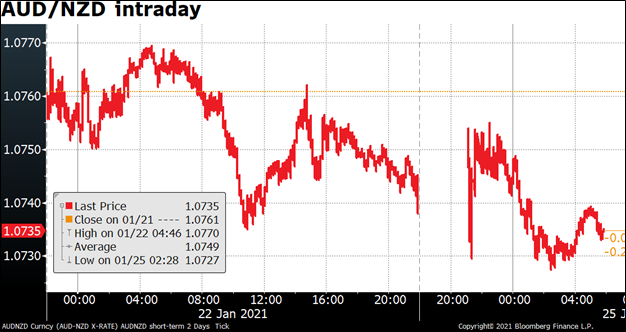 As for the other currencies, there’s no point in discussing why a currency might be up or down 0.1%. Sometimes it could be just a big order going through a thin market – say, an insurance company has to make a payout or an exporter converting payments. Brownian motion in the FX market.

All week long we’re going to have commentary from various luminaries at the virtual Davos World Economic Forum (WEF). This year it’s been rebranded The Davos Agenda and it’s all happening online. You can see the agenda and probably tune in to any of the speeches & presentations that are open to the public.

There’s another conference today as well:  The Lamfalussy Lectures Conference, named after Baron Alexandre Lamfalussy, It’s an annual conference hosted by the central bank of Hungary for central bank governors and financial professionals to discuss issues related to monetary policy and the stability of the financial system. ECB President Lagarde and her arch-enemy, Bundesbank President & ECB gadfly Jens Weidmann will be speaking there today.

(Note: this page says that Lamfalussy is known as “the father of the euro.” I thought that was odd as I’ve never heard of him before. I dug a little deeper and I noticed his Wikipedia page doesn’t mention this sobriquet. I then did a search for “father of the euro” and I got some 626k hits listing a variety of people – apparently the euro’s parentage is in wide dispute! Former Luxembourg PM Pierre Werner, whose eponymous “Werner Plan” of 1970 envisioned a single currency, seemed to come out on top with 125k hits, followed by 29k for EC President Jean-Claude Juncker, 20.8k for economist Robert Mundell (who’s sometimes described as the “spiritual” father), 5.2k for French PM Valery Giscard d’Estaing, 4.9k for Lamfalussy, 3.4k for EC President Jacque Delors, 2.8k for Italian Finance Minister Tommaso Padoa-Schioppa, 1.9k for ECB Chief Economist Otmar Issing, and far behind, 16 for Denmark’s Niels Thygesen  (although at least one of those hits was because Padoa-Schiopa was mentioned in an article about him). Someone was mentioned as Portugal’s “father of the euro,” but I didn’t dig further.

FYI I also did a search for “mother of the euro” and got a mere six hits, only one of which was relevant: a Politico page that noted how many fathers the euro apparently had and said that “The mother of the euro wasn’t around when the currency was conceived.”)

As for today’s indicators, we start with the Ifo survey of German industry. The current assessment is expected to decline, but the expectations index is forecast to rise.  That matches the ECB’s view. 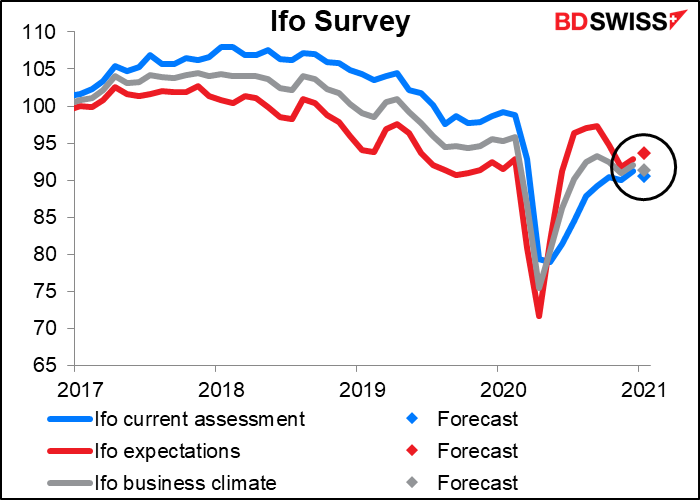 The fall in the current conditions index would corroborate Friday’s fall in the preliminary Markit composite purchasing managers’ index (PMI) for Germany, which fell to 50.8 from 52.0. The composite index is more appropriate than the manufacturing index as the Ifo surveys companies in construction, wholesaling and retailing as well as manufacturing. The two don’t always move in the same direction, only 54% of the time, i.e. basically it’s random.

Given the consensus around this view, I don’t think it will affect the markets much. 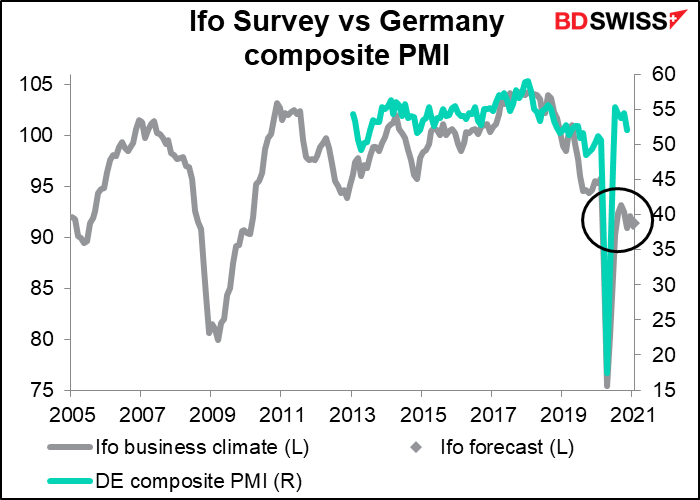 Last week there was finally a substantial rise in Swiss sight deposits, which suggests that the Swiss National Bank (SNB) is alive and kicking! It was the biggest increase since the week of Oct. 23. Seven of the previous eight weeks had been declines, and the one week with an increase was extremely small (68mn). EUR/CHF has been trending higher since then; maybe like with the CERN Large Hadron Collider, which is also located (mostly) in Switzerland, we can detect the actions of the invisible SNB by looking at the tracks that it leaves in the market. 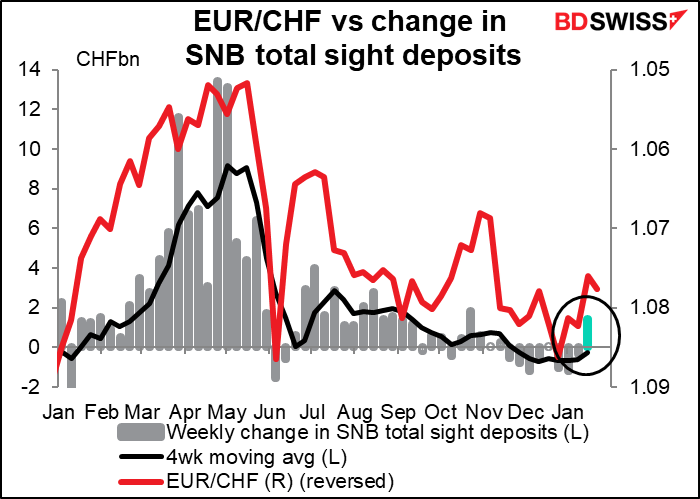 The Chicago Fed national activity index is one of those that had a 28-standard-deviation event earlier in the year and is now starting to get back to normal. The graph won’t be useful for some time because the change earlier in the year totally blows up the scale, rendering the normal change in the index (±0.42) invisible. 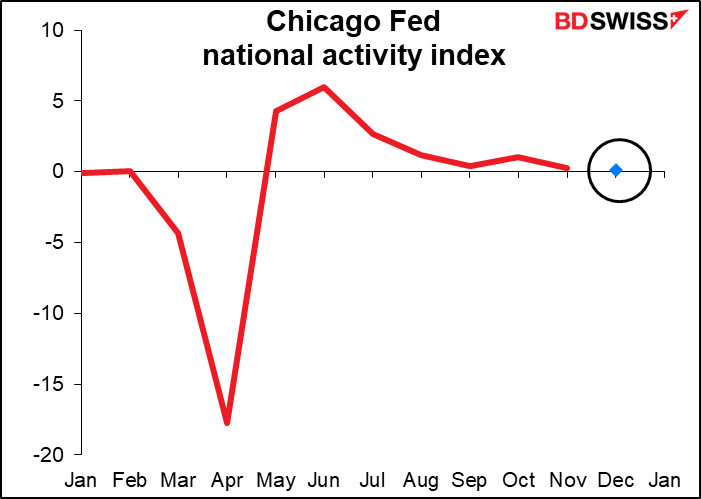 I suppose I should just make a graph excluding those few months. That would be much more useful. As you can now see, the index is expected to fall substantially but still indicate that growth is above trend – although it’s getting close to the line. 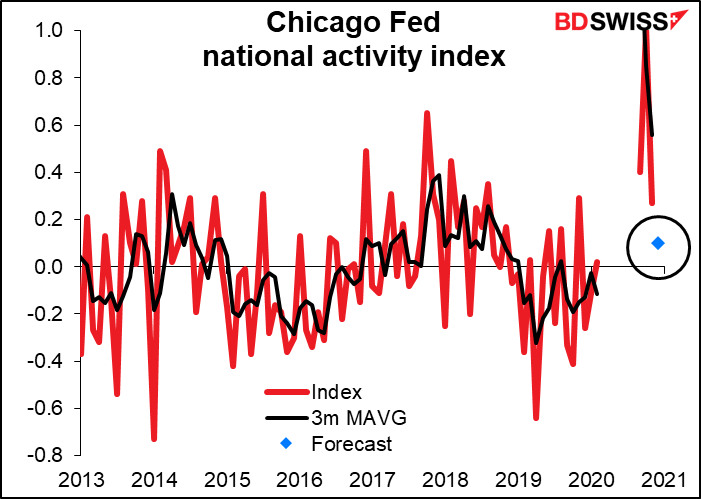 Then it’s off to bed until we get up bright and early tomorrow for the UK employment data. It’s expected to show a deteriorating labor market, which shouldn’t surprise anyone as the country started the slide into lockdown in November. The surprise if at all is that the number of people losing their jobs and the number of unemployed isn’t higher. The latter is in part because the UK publishes a three-month moving average of unemployment, also in part because it has a big employment furlough scheme that keeps people off the unemployment rolls – the number of people on this scheme nearly doubled between October and November.

The numbers are almost guaranteed not to be pretty, but will this affect sterling? I think the currency is being driven by forward-looking views, particularly the question of whether the government is likely to implement negative rates. It seems the market is revising its view on that subject from “definitely” to “maybe” and starting to thing “well, maybe not.” That’s more important than what happened in October. The future also depends on the virus and the vaccine, and although the virus’ toll on the UK is horrendous, the country’s vaccination program has somehow gone extraordinarily well. After less than a month, the UK has administered close to 5mn first doses (and over 450k second doses). It’s now got a run rate of nearly 300k doses a day. By comparison the US, with a population five times as big, is administering 983k a day, or a little bit more than 3x the UK number. 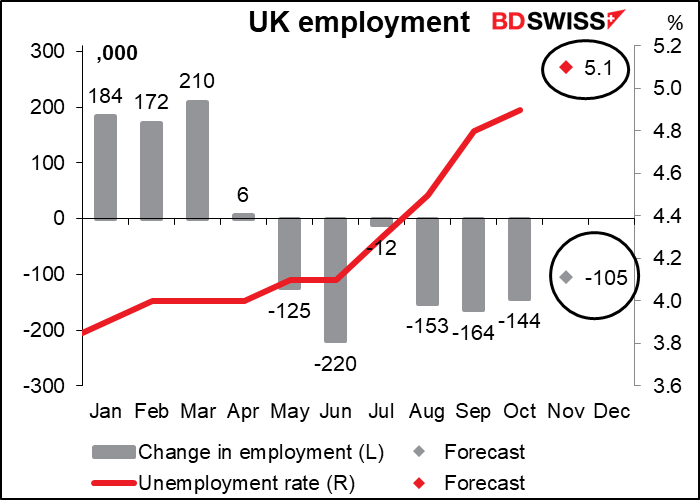 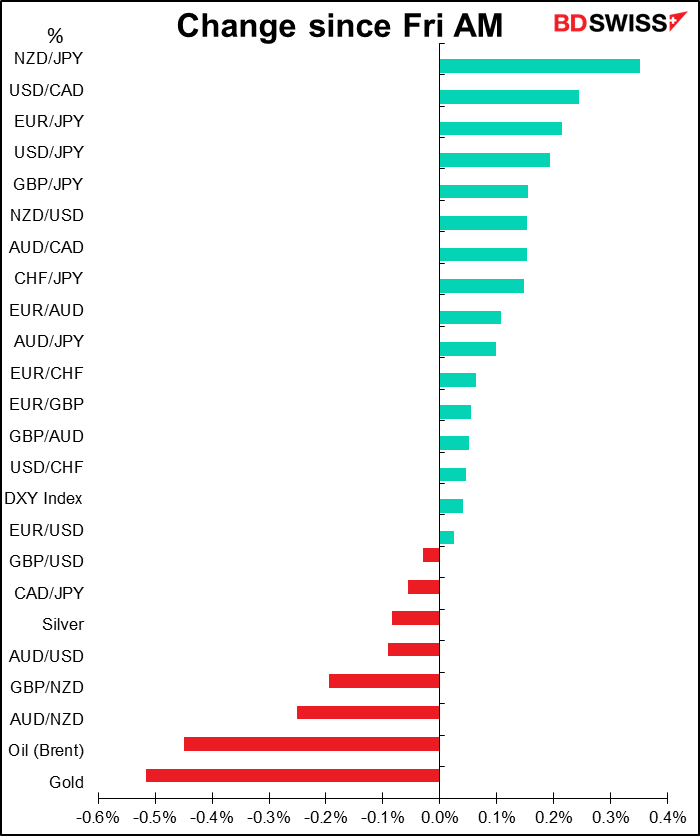