CAD is in focus this morning as USD/CAD hits a three-year low (lowest since February 2018 = highest for CAD). The move started on Friday when Canadian employment data turned out to be much better than expected. There were 259k new jobs in February, much more than the 75k that had been expected. 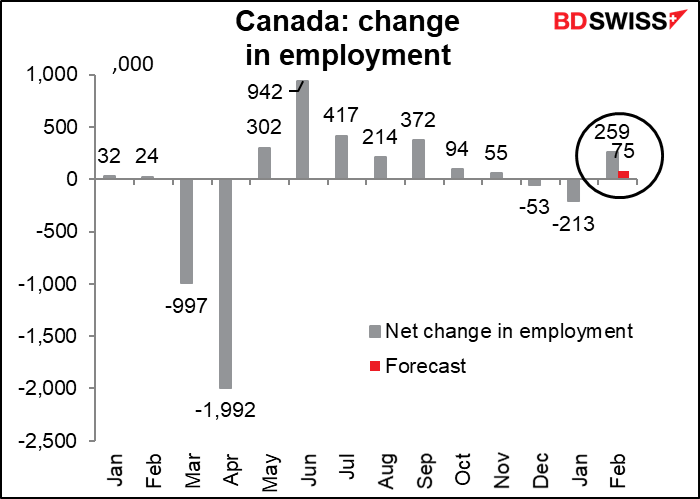 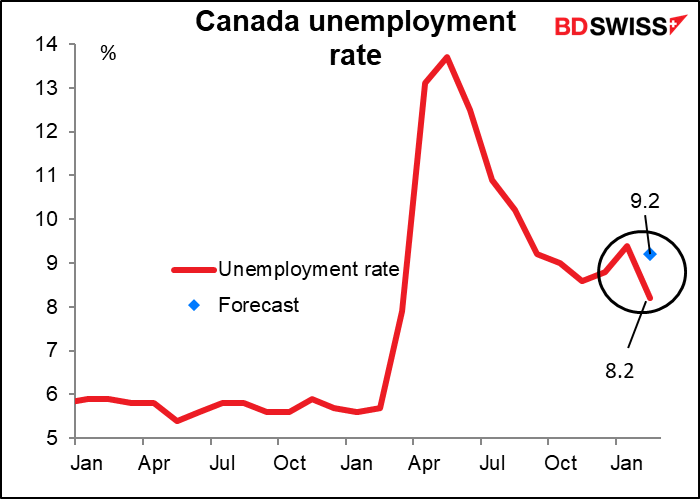 Of course higher oil prices this morning didn’t hurt, with oil rallying on better-than-expected China data – February industrial production and retail sales both beat estimates. But as the bulk of the move came on Friday, that wasn’t the main reason.

With Canadian housing starts and manufacturing sales coming out later today, there’s more opportunities for volatility in CAD. I think the figures could beat estimates, as the economic surprise indicator for Canada has been trending upward recently. That would be likely to push CAD higher (push USD/CAD lower). But there could always be disappointment, too. 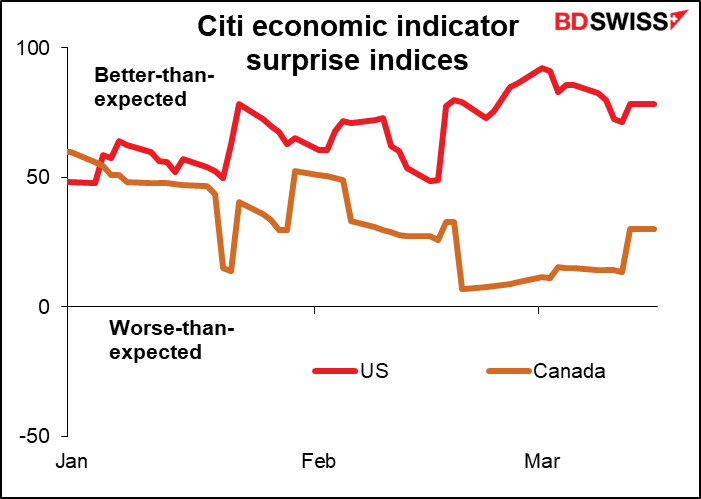 The big mystery today is why is AUD the 2nd-worst-performing currency when JPY is the worst-performing? Usually a lower JPY is a sign of a “risk-on” environment, in which case AUD would tend to be higher. That’s especially so when the China data was favorable.

However, not everything in China is favorable for AUD today. The fall in the currency may be connected to the slump in iron ore futures, which fell today as China’s top steel-making city expanded its inspection of mills in a push to crack down on violations of pollution curbs. Also there may have been some selling of AUD for NZD on speculation of M&A flows, according to Bloomberg. 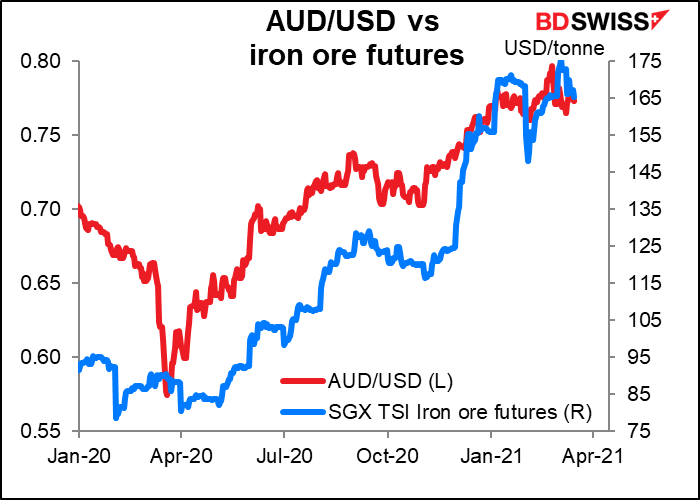 And we do have a real “risk-on” environment. US equities managed to climb further into record territory on Friday even though US 10yr real yields rose around 10bps. It’s significant that the stock market can shrug off a rise in yields – that’s the way it’s supposed to be. (When I say “equities” hit a record high, I mean the S&P 500 – the NASDAQ fell as tech stocks remain weak.)

Commitments of Traders (CoT) report: throwing in the towel on short USD

The CoT report showed that speculators are starting to throw in the towel on short USD positions. The biggest change in value terms was with EUR, while as a percent of positioning it was in JPY. They also cut longs in GBP, CAD, and MXN, such that the overall short USD position is the smallest since last July.

On the other hand, they increased their long CHF position for the third consecutive week, which seems strange, considering that it continued to weaken. They appear to expect it to mean revert. 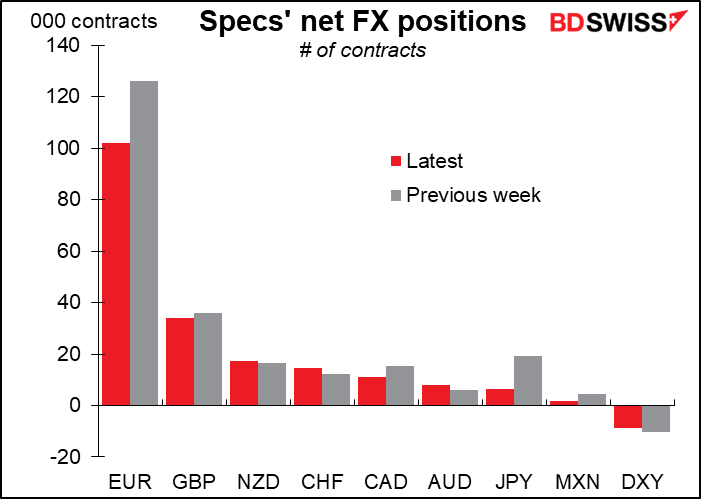 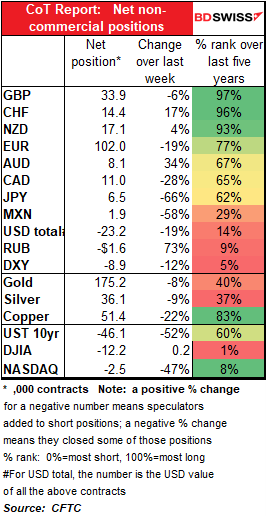 Hedge funds also cut their long EUR positions, in this case dramatically, almost down to nothing. They had already gone short JPY and increased their short positions. They too added to CHF longs. 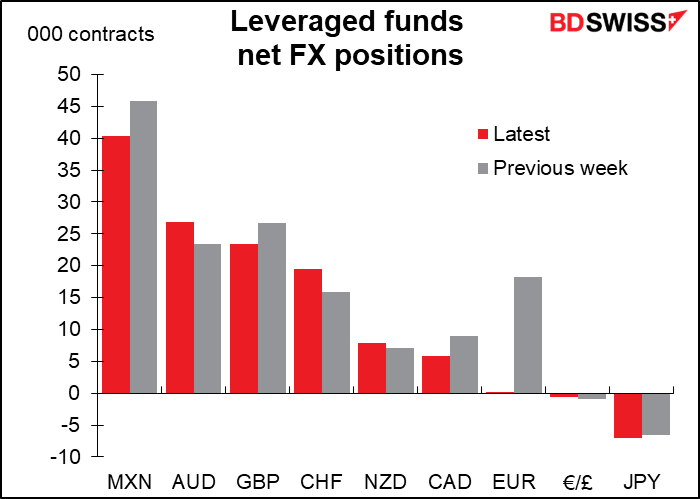 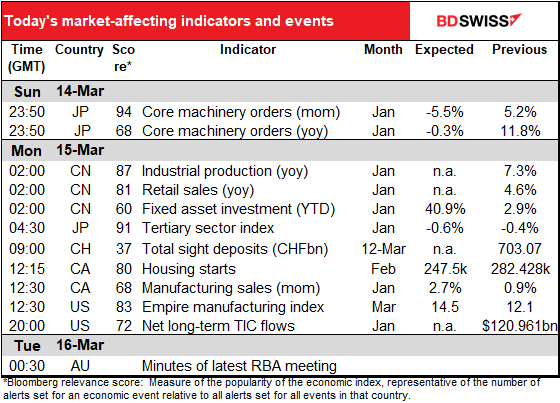 Not much during the European day, only the weekly Swiss sight deposits, which haven’t been that interesting recently. Well, they have been insofar as they show that CHF is falling without any help from the Swiss National Bank (SNB). On the contrary, sight deposits fell by some CHF 1.1bn in the latest week, suggesting that the SNB might have been intervening to slow the CHF’s decline – remarkable! 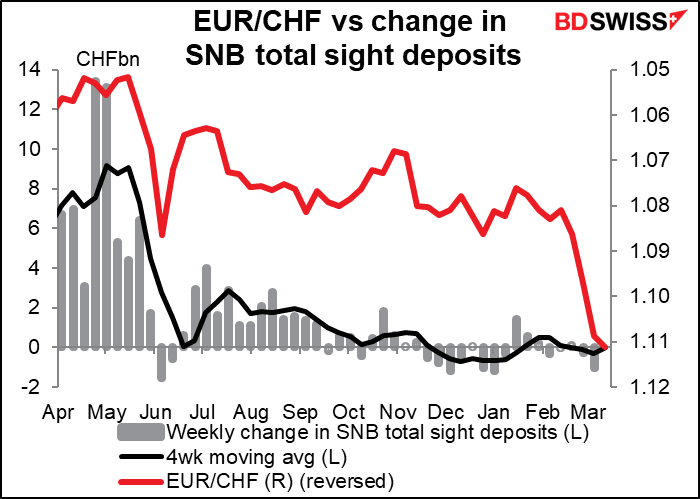 Canadian housing starts have been surging in the white-hot Canadian housing market. Existing home sales rose more than 50% yoy in the majority of markets where local real estate boards have so far reported, with increases of over 100% yoy in a few places. Single-family home prices are up 20% yoy or more in many places and still trending higher.

I wonder if it’s just coincidental that the consensus forecast of 247.5k is almost exactly the same as the six-month moving average (245k). That’s one way to make a forecast. 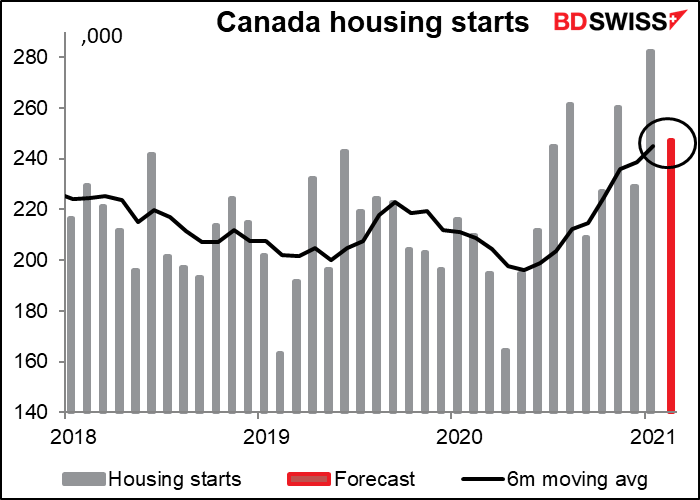 Candian manufacturing sales are forecast to be up 2.7% mom, according to the consensus forecast. This is a bit higher than the flash estimate put out by Statistics Canada of 2.5% Exports are flourishing (up 5.5% mom), which should help the figure despite reports of supply chain disruptions weighing on auto production.

With growth concerns beginning to fade in Canada, attention has shifted to whether demand could recover too quickly, outstripping supply and creating inflationary pressures. The market will be watching Wednesday’s Canadian consumer price index for any signs of that happening. 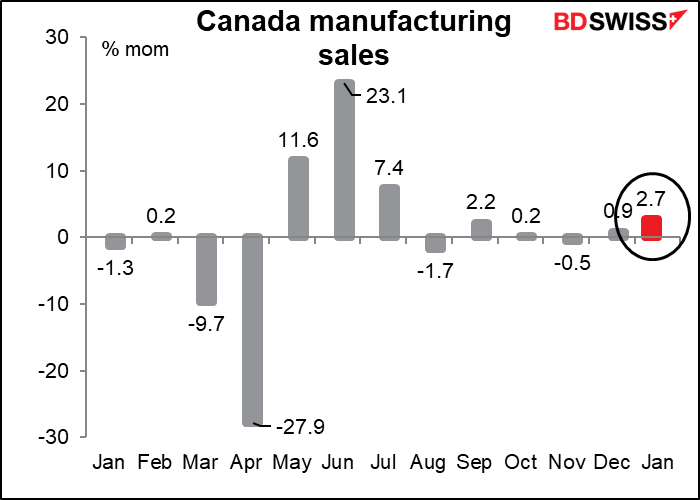 The Empire State manufacturing survey is expected to be higher, as is Thursday’s Philadelphia Fed business survey. Not by much, but higher is higher. Positive for risk, negative for bonds. 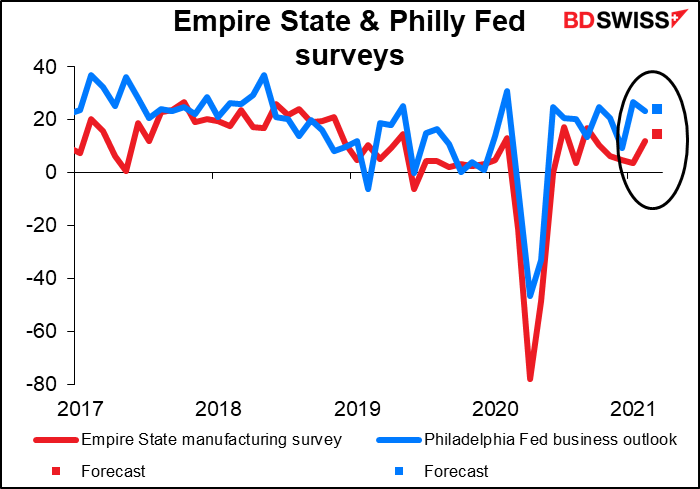 The minutes of the March 2nd Reserve Bank of Australia (RBA) meeting will be interesting mostly for what they might say about the recent sell-off in the bond market, which was at its most extreme in the week before the meeting. 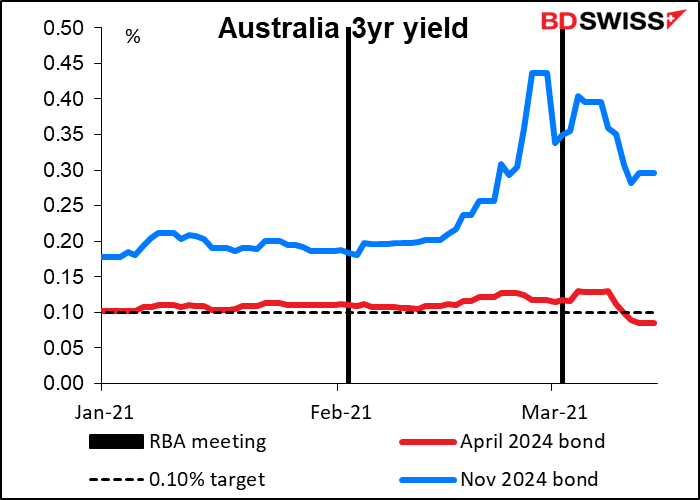 In the statement following the meeting, the RBA noted the move but didn’t take a strong position on it. It said,

“The positive news on vaccines together with the prospect of further significant fiscal stimulus in the United States has seen longer-term bond yields increase considerably over the past month. This increase partly reflects a lift in expected inflation over the medium term to rates that are closer to central banks’ targets. Reflecting these global developments, there have been similar movements in Australian bond markets.

Nonetheless, it did note that it had resisted the move and would continue to do so:

The Bank remains committed to the 3-year yield target and recently purchased bonds to support the target and will continue to do so as necessary. Also, bond purchases under the bond purchase program were brought forward this week to assist with the smooth functioning of the market. The Bank is prepared to make further adjustments to its purchases in response to market conditions

Governor Lowe pushed back further against the market’s view in a rather dovish speech on March 10th (The Recovery, Investment and Monetary Policy) “…over the past couple of weeks market pricing has implied an expectation of possible increases in the cash rate as early as late next year and then again in 2023,” he observed. “This is not an expectation that we share.” 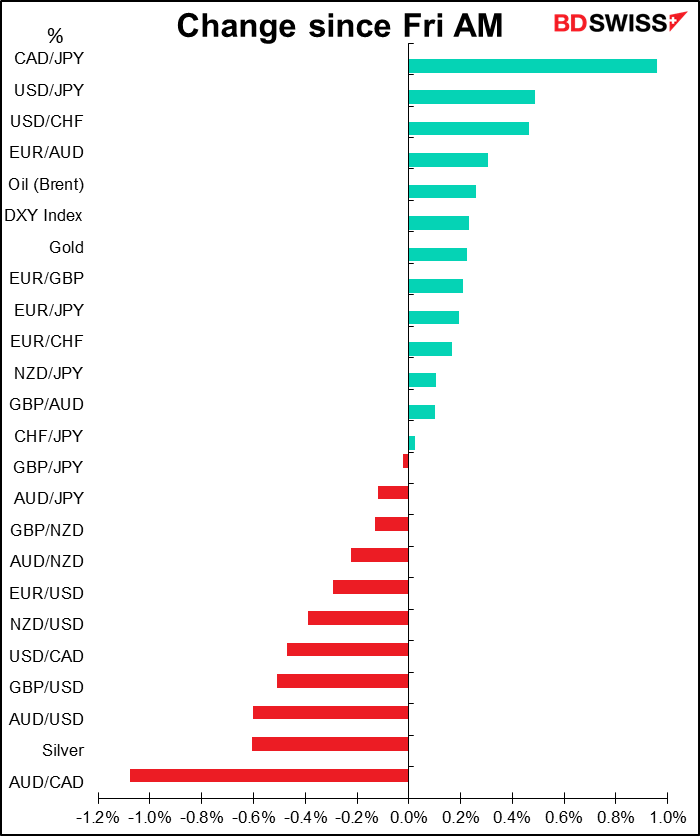