CAD Up in Quiet End-Year Trading 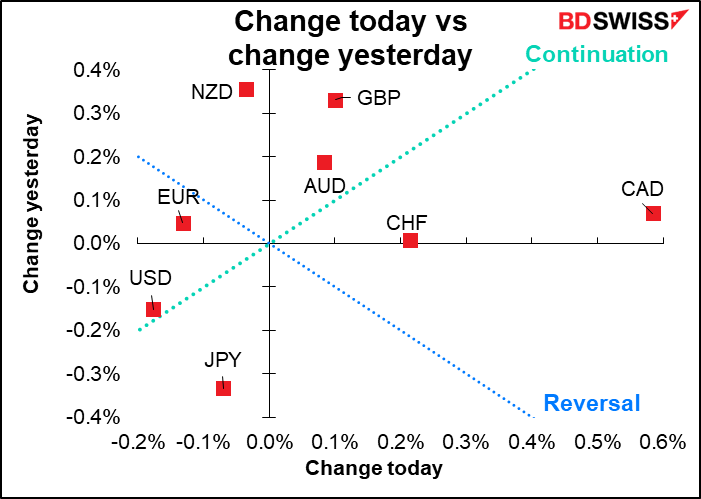 Not much going on in the FX world today, with the notable exception of CAD. This was not really thanks to higher oil prices, which in the event were up only marginally ( 0.17% for WTI). The two markets moved pretty much in tandem on Wednesday but seemed to go their own ways on Thursday afternoon in Canada.

Nor has there been any change in the market’s estimate of Bank of Canada policy. 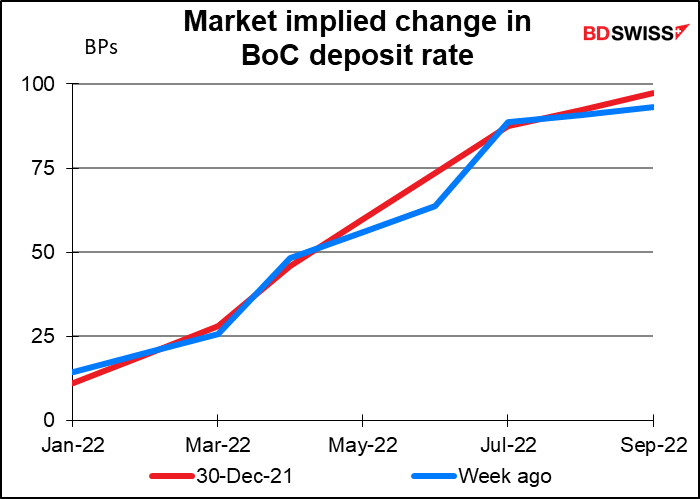 And it’s certainly not because of any good news about the virus, which has been going vertical in Canada just like in other places and is significantly worse than in the other two commodity currency countries. 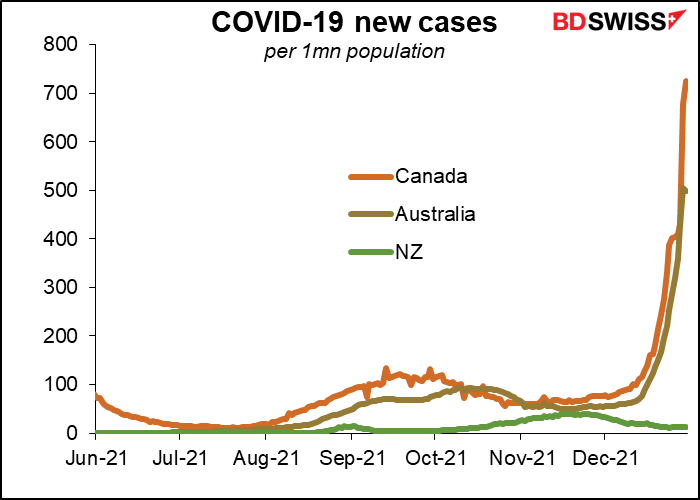 Perhaps someone is looking forward to next Tuesday’s OPEC meeting. The 23-member group has been increasing its overall output by 400k barrels a day (b/d) each month. There’s been some speculation that the group may freeze its February output at January’s level rather than increasing it as scheduled. They had been considering freezing January output due to concerns about the omicron variant and in retaliation for consuming countries releasing oil from their strategic petroleum reserves, but raised it by the usual 400k b/d under pressure from the US and other consuming nations.

Then again, they just might continue with their schedule of  400k b/d increases. Reuters quoted “an OPEC source” as saying, “”At the moment, I have not heard of any moves to change course.” I think that’s more likely, given the fact that Brent has risen 15.4% from the levels the day before their last meeting (which was on Dec. 2nd). Brent rose 53% during 2021 so they can be pretty happy with what they’ve accomplished.

My guess is just someone somewhere finishing up some last-minute business before closing the books for the year.

As for the dollar, I assume its continued decline is due to the gradual decline in risk aversion. Certainly it’s not due to any change in sentiment about Fed policy, which has only become more convinced of an early rate hike. The market now sees a rate hike in March as better than 50-50 probability. 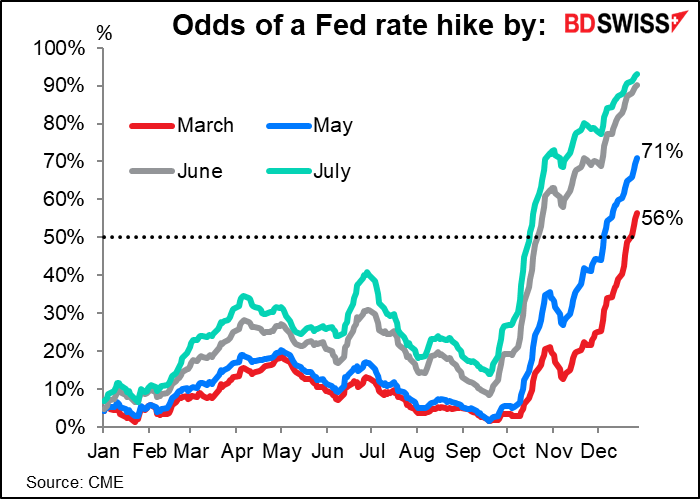 That would also explain the continued decline in JPY. It wouldn’t however explain the decline in EUR nor the rise in CHF. But to be honest, in thin markets with almost no news like we have this week, I’m not sure how far we should be groping for explanations of small movements.

I mentioned yesterday Florida and its appalling Governor, Ron DeSantis. Well, guess who’s been MIA (missing in action) since his last press conference on Dec. 17? None other than! Many people are wondering why he canceled a state cabinet meeting and hasn’t had anything to say about the state’s horrendous outbreak of COVID-19, the sharpest rate of increase in the nation by far. After being criticized for his absence, a photo of him at a restaurant (nice touch that) appeared in his Instagram and Twitter feeds, but that didn’t prove much as the photo was taken 12 days before. The speculation now is that he too has been hit by the virus, which not surprisingly doesn’t seem to favor one political party or the other.

As T.S. Elliot might’ve said, “This is the way the year ends/Not with a bang but a whimper.” The only indicator on the schedule today has the lowest Bloomberg relevance score I’ve ever seen:  a zero. Zero! Not one person apparently is interested enough in the Swiss fx intervention figures to set an alarm for it.

In any case, it looks like the number is likely to be pretty small anyway. 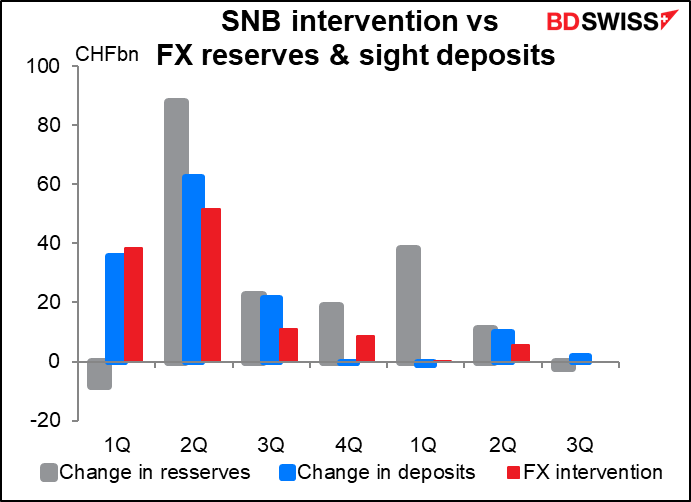 Looking at the EUR/CHF level, it seems that it has to go below 1.07 in order to generate a lot of intervention. However we don’t have much data to go on here so it’s hard to draw any firm conclusions. 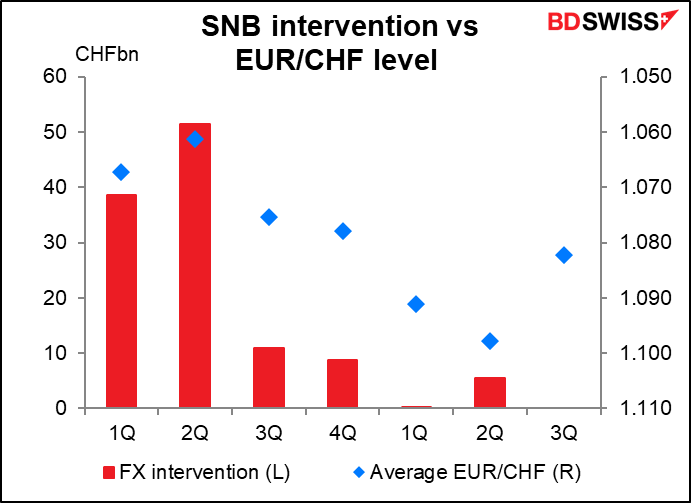 So that’s it. Have a Happy New Year and don’t drive if you’re drinking! (That is, if you’re going to a New Year’s party in the first place – most of them are cancelled anyway, I’d assume.)

Thanks for reading my commentary. I look forward to continuing our discussion on the markets next year! 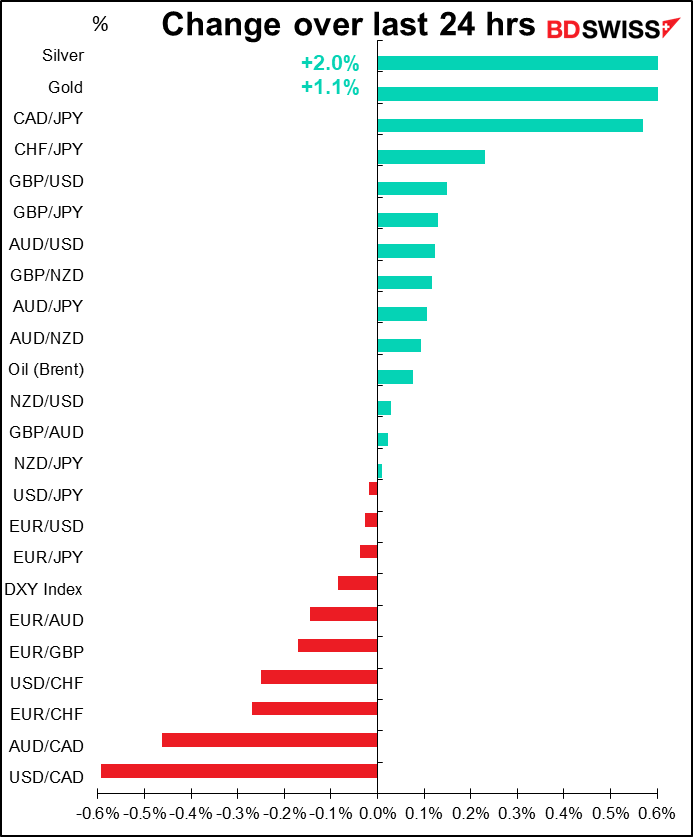