CAD Up on Widening Yield Differential; US CPI 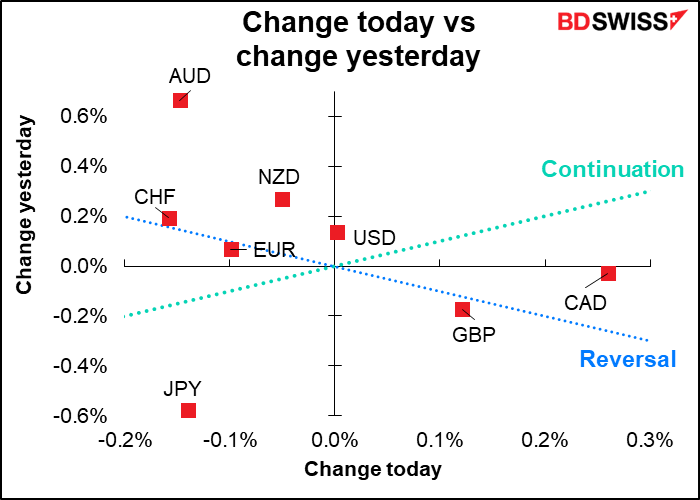 CAD was the best-performing currency despite a modest decline in oil prices. The currency followed oil for part of the day but the two deviated this morning, with CAD continuing to gain (USD/CAD declining). 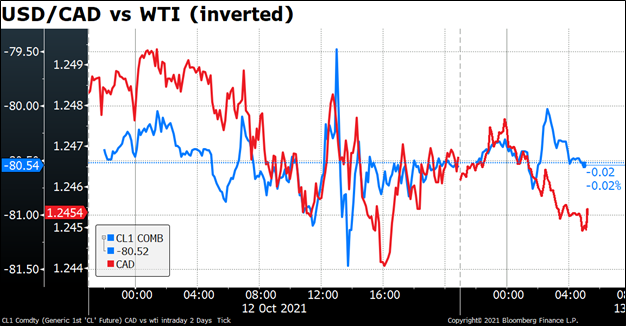 This is probably because USD yields declined yesterday while CAD yields were unchanged. 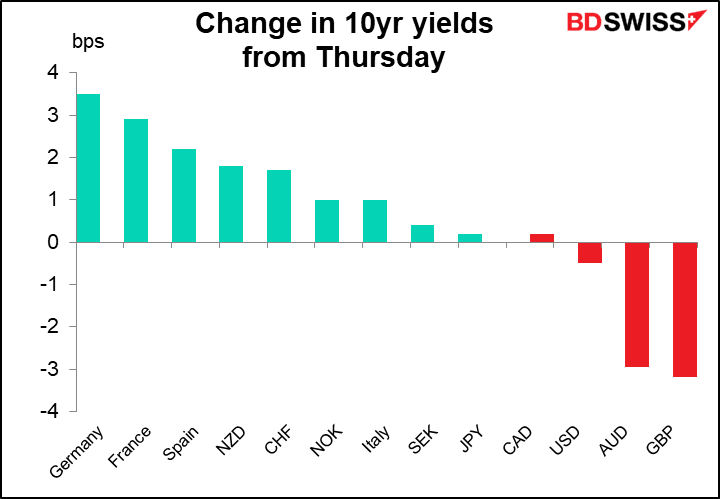 This widened out the yield advantage of unhedged CAD bonds over Treasuries. 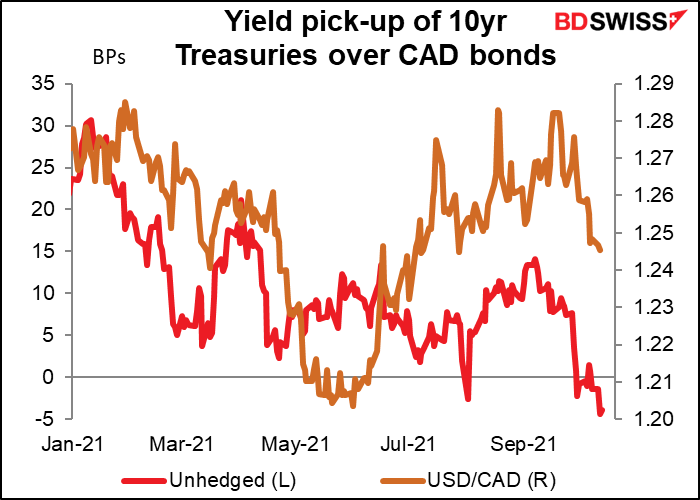 The relationship didn’t help EUR however despite the aggressive sell-off in European bonds that pushed German (and other European countries’) yields higher. 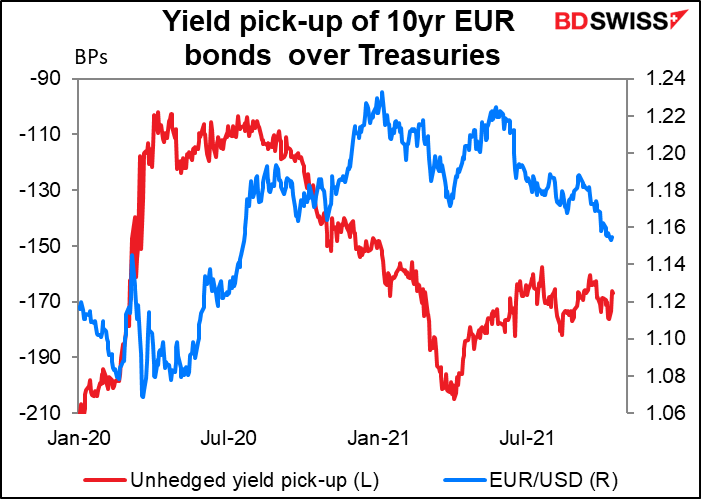 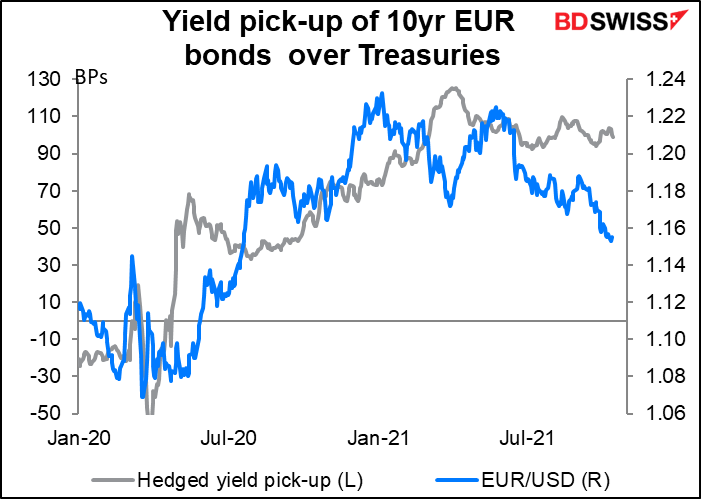 One thing that surprises me: GBP doesn’t seem to be affected by the increasing tension between the UK and the EU. The UK’s Brexit minister, David Frost, said that the Northern Ireland Protocol “is not working” and was not protecting the Good Friday Agreement. Instead he has proposed a new, amended protocol. The EU will issue its proposals today. There’s a good chance that this agreement falls apart, because it was always impossible to satisfy both sides – they want mutually contradictory things (the BBC has a good explainer on this). My guess is that Brexit is now considered yesterday’s news and the market is focusing on the Bank of England and potential interest-rate tightening. 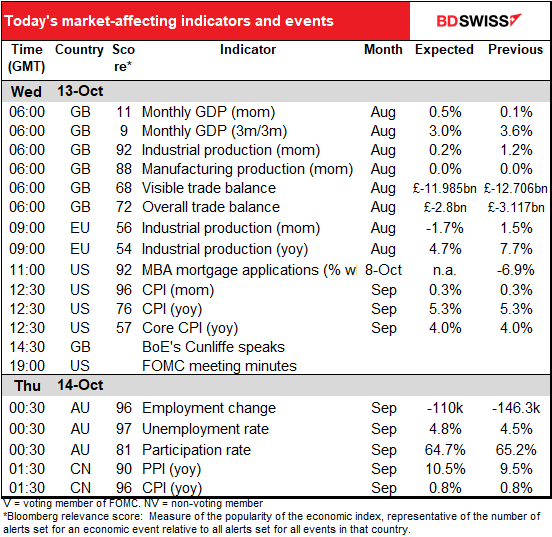 The morning started out with the UK short-term indicators. GDP was weaker than expected, but industrial and manufacturing production were stronger. Meanwhile the trade deficit widened out significantly while last month’s was revised down a lot. That’s more in line with what I would’ve expected, given the Brexit problems.

I think Brexit & trade should be a bigger issue for GBP than it is, because the country has a persistent current account deficit that has to be covered by a financial account surplus (inflow into financial markets). That probably means higher and higher interest rates to support the pound. But can a country undergoing such a radical change in its supply chain really support such higher rates? I think it spells trouble for Britain and the pound in the future. 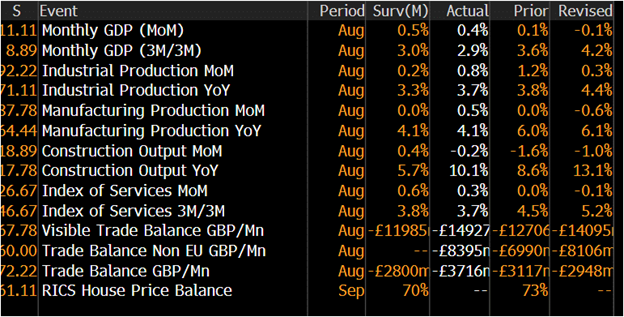 EU industrial production is expected to fall on a month-on-month (mom) basis, while the year-on-year (yoy) rate of increase is set to decline. 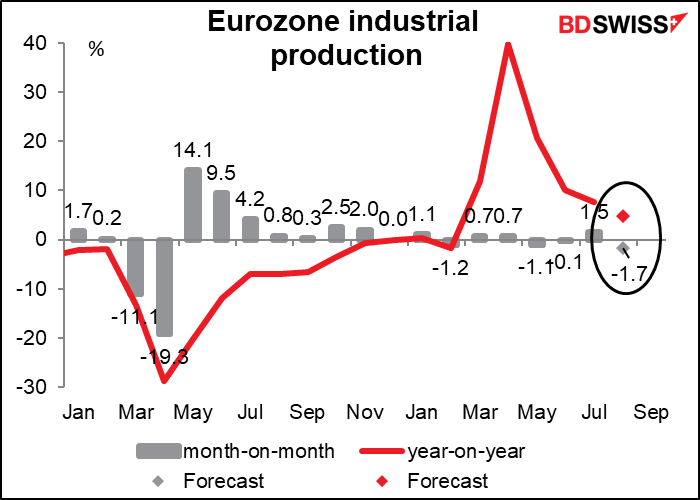 This forecast would put EU IP 1.4% below the pre-pandemic level. That’s not as good as the US, which has already recovered to the pre-pandemic level, but it’s about par with the UK (-1.8% based on the forecast for this morning’s figure) and above Japan (-3.9%). You can see how Germany (black line) has been dragging down the EU average. This speaks to the weakness of global demand. 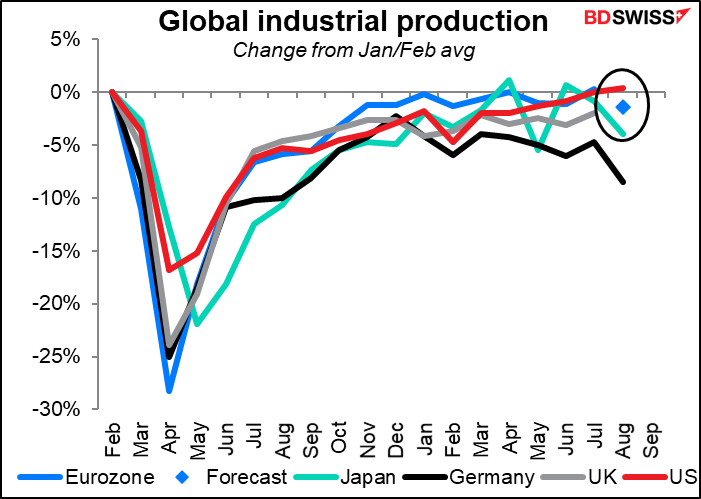 Then comes the focus of the day, the US consumer price index (CPI) This month it’s a crucial report as it’s the last one that the Fed will get before the Federal Open Market Committee (FOMC) meets on Nov. 3rd to decide whether to taper down their $120bn-a-month bond purchases.

Inflation is expected to slow at both the headline and core level. 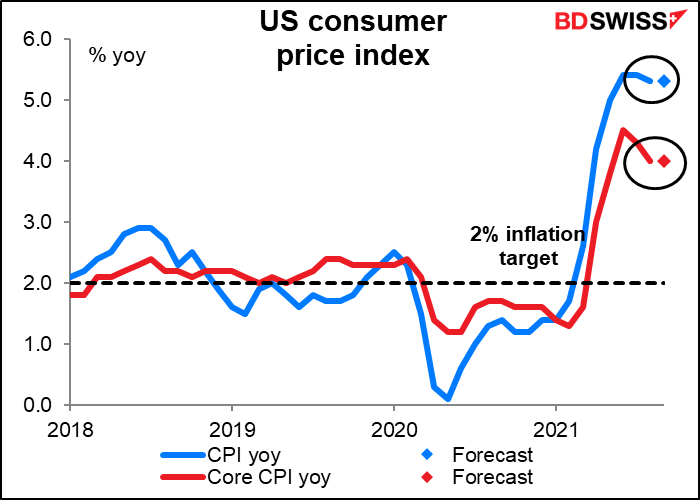 Of course, we’re still feeling some of the base effect from the price drops that occurred a year ago. If we just take the last three months’ worth of CPI figures and annualize them, you can see how the rate of inflation is slowing even more dramatically. On this basis, the core CPI is expected to show only a 2.6% annualized rate of change – a far cry from 10.6% annualized back in June. 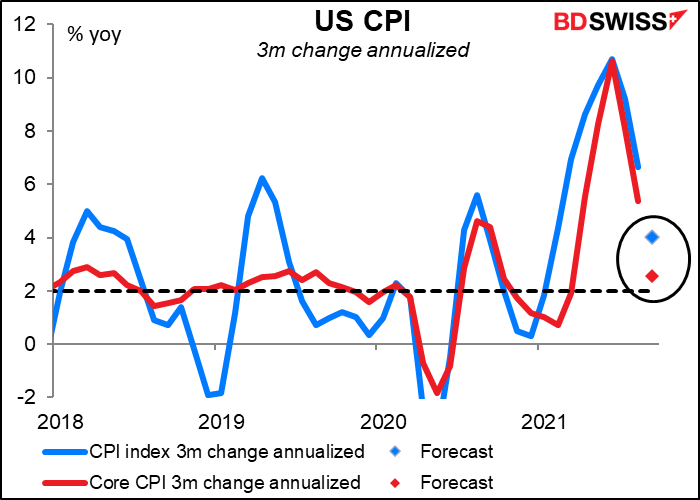 So yes, the rate of inflation in the US is slowing dramatically. Whether this argument will win over the hawks and keep the “transitory” thesis alive is another matter. Much depends on whether the huge surge in energy prices that began in September continues in October. So far it looks like energy may have peaked, in which case the mom rate of change could fall in October.

Some important points to watch: people will be looking to see what happens with used car prices in the CPI. Auto prices have been responsible for about one-third of the yoy rate of increase in the CPI, believe it or not. There were some signs that this distortion was cooling down; the Manheim US used vehicle value index fell on a mom basis in June, July, and August. Unfortunately it rose a sharp 5.1% mom in September. (Manheim is the world’s largest used car auction house, selling some 5mn used cars a year.) 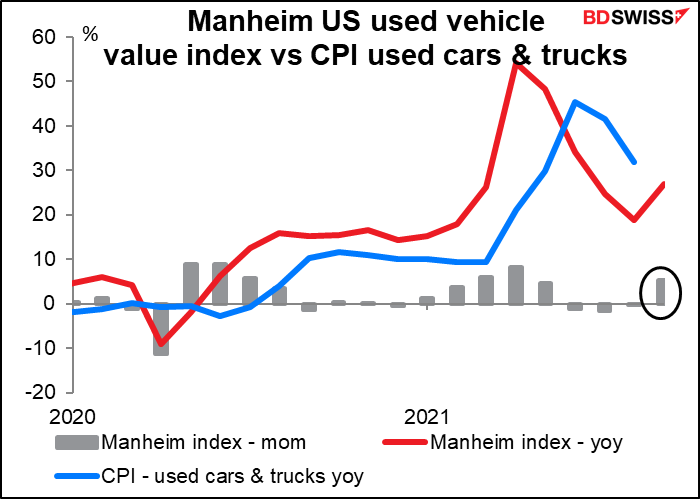 Also energy. Energy prices soared during the month. This is especially worrisome because the way things are going, higher energy prices could be longer-lasting and endanger the dominant narrative that these higher inflation rates are only “transitory.” 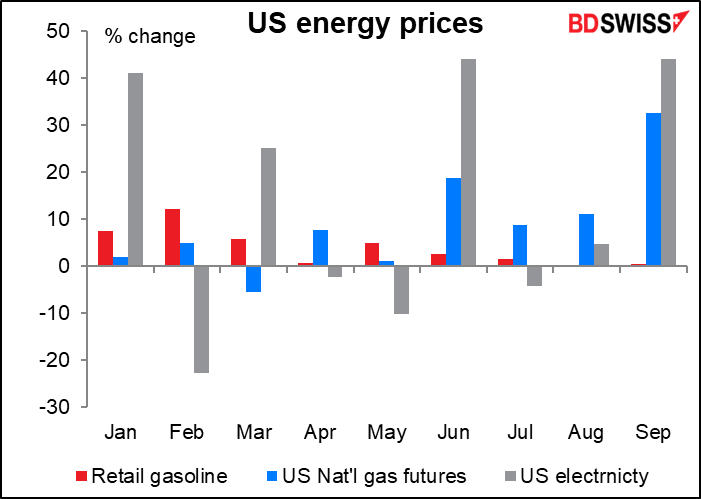 The minutes of the Sep. 22nd meeting of the Federal Open Market Committee (FOMC) will probably be less interesting than usual. The minutes are usually dissected to see which way the winds are blowing on the Committee, but if the members mostly agree, as they did in September, then there’s not that much to learn from them. The minutes will probably just solidify the already-dominant view that the Fed is going to start tapering down its bond purchases at its Nov. 3rd meeting, particularly since the economy dodged two bullets: the government managed to push out the debt ceiling, and the September jobs report cleared Fed Chair Powell’s rather low bar of being “decent.”  Furthermore, we’ve heard from a lot of Committee members since the meeting and most of them have expressed support for tapering, so what’s left to learn? Maybe some technicalities like whether they’ll taper their purchases by a certain amount per month or per meeting.

Then overnight Australia announces its employment data. Thanks to the lockdowns the number of jobs fell last month and is expected to fall again this month. 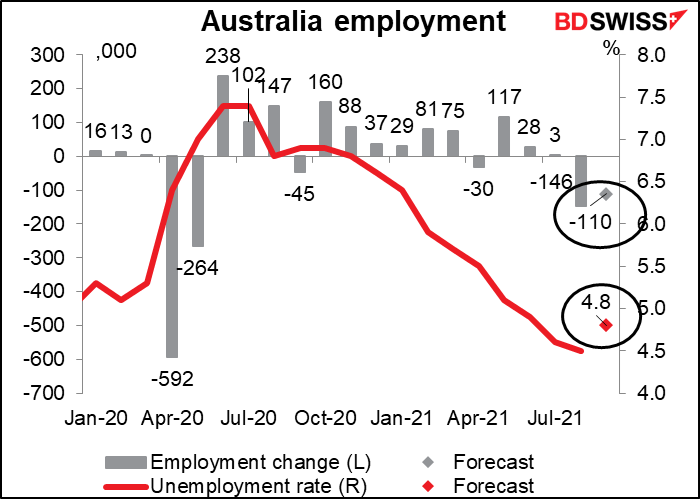 Australia was the first industrial economy to recover all the jobs lost during the pandemic, but as a result of these declines, employment is expected to fall back to below the pre-pandemic level, never mind to where it would’ve been had the pandemic never occurred. 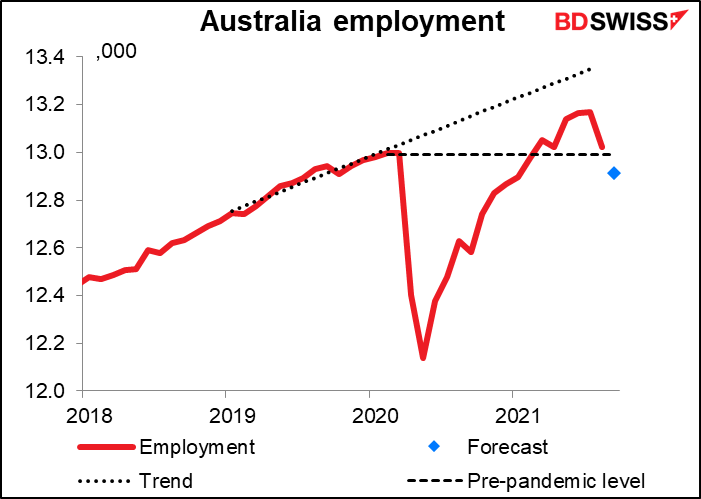 The unemployment rate is expected to rise, but so too is the participation rate. Last month there was a strange combination: the unemployment rate fell even though the number of people employed also fell. That implies a lot of people decided not to bother looking for work in August due to the lockdown. The assumption behind today’s forecast of a rise in the participation rate must be assuming that a lot of these people start looking for jobs again as the lockdowns ease. 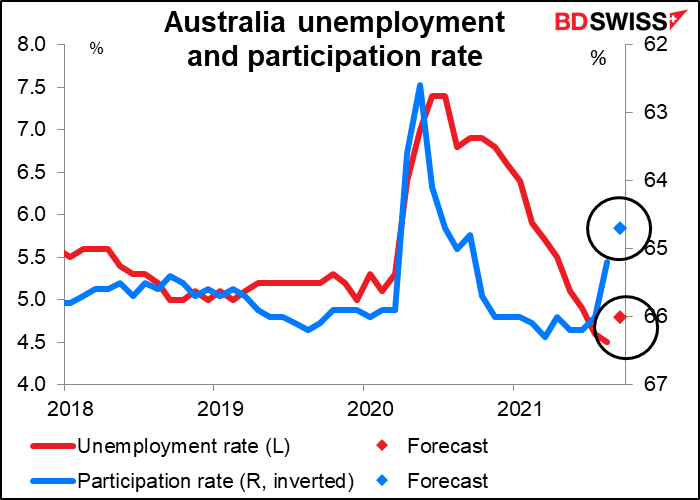 None of this may be what matters to the Reserve Bank of Australia (RBA) however. In the statement following the last meeting, RBA Gov. Lowe said that hours worked are “the best indicator of labour market conditions at the moment.” Hours worked fell by 3.7% mom in August to stand -5.6% from the peak in May. No forecast available for this indicator.

Although the weak labor market is likely to be “transitory” as the lockdowns are lifted and the economy bounces back, nonetheless I expect that AUD could get a hit from these figures, which are likely to suggest that the RBA will be in no rush to normalize policy. 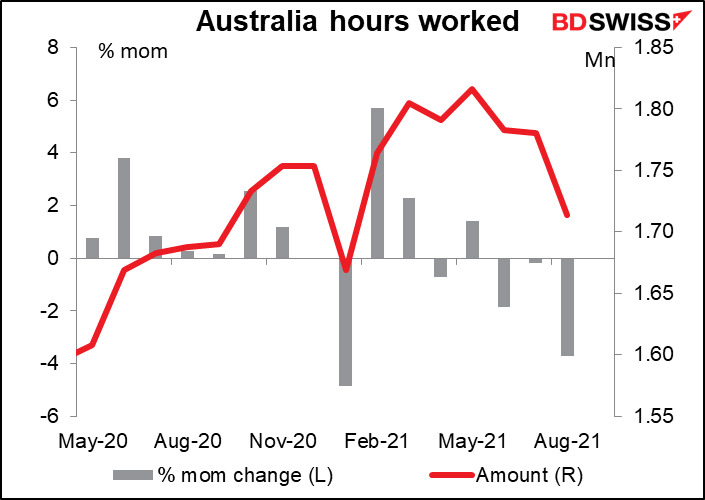 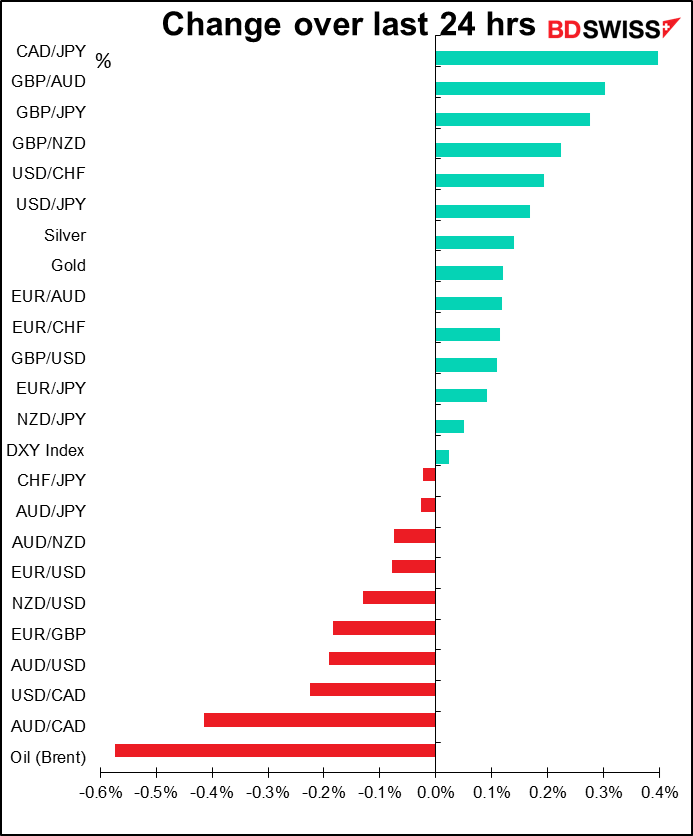