CHF & JPY Up on “Reversal Day”, CAD Down on Lower Oil

Hah! All the graphs I showed yesterday morning about the stock market went in the opposite direction Tuesday as the tech stocks came roaring back. The NYSE FANG index of 10 of the biggest tech stocks (Amazon, Apple, Facebook, Tesla etc.) was up a whopping 6.4% in one day… 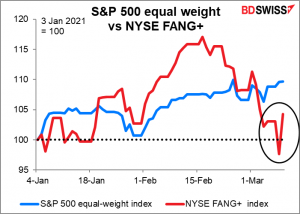 …as the rotation out of growth/momentum stocks and into value/cyclical stocks reversed. 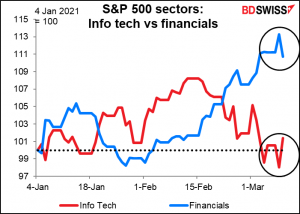 Well, it wasn’t that value was down so much — pretty much everything was up – but growth was up a lot more than value. Many of the stocks benefitting from the WFH movement, such as Zoom and Pelaton, saw double-digit gains. 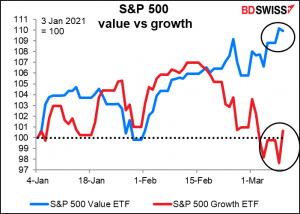 Tesla was the standout, gaining some 20%. This increased founder Elon Musk’s net worth by $25.1bn in one day – the most any person’s wealth has ever increased in a day, according to Bloomberg. Amazon’s Jeff Bezos lagged with only a $6bn increase, and maybe we should start up a GoFundMe account for Steve Ballmer, formerly of Microsoft, who made a paltry $2.1bn yesterday.

The rally in stocks was matched by a rally in bonds as 10yr yields fell -6.4bps to 1.53%. This was the first fall in yields (rise in prices) in five sessions. The move wasn’t driven by lower inflation expectations – on the contrary, they rose slightly – so it represents a significant decline in real yields. 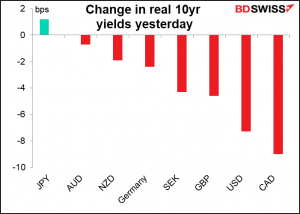 The market was encouraged by a good auction of $58bn in 3yr notes. The Treasury will auction off $38bn in 10yr notes today and $24bn in 30yr bonds tomorrow – those are the big hurdles for the bond market, as well as today’s US consumer price index (see below).

Oil continued to fall as the market retraced the reflexive jump that occurred after the attack on Saudi Arabia’s main loading port, Ras Tanura. That of course dragged down CAD.

With stocks, bonds and oil reversing their recent moves, is it any surprise that the FX market also reversed some recent moves? CHF has been quite weak recently – as of Monday it was the worst-performing G10 currency this year and USD/CHF’s close Monday at 0.9362 was the highest since last July. It was therefore ripe for reversal on this “reversal day.”

While the tech stocks may come back into favor in equities, I think the argument for a weak CHF and JPY is more fundamental and therefore more likely to be long-lasting: as things get back to normal, carry trades come back into fashion, and the currencies with the lowest short-term interest rates and the least likelihood of raising short rate are the best candidates for funding currencies. It’s CHF for the former criterion and JPY for the latter.

Just FYI, AUD/JPY is unusually active this morning, according to FX brokerage CLS. 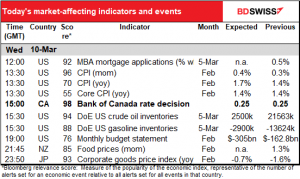 Two big events today – the US consumer price index (CPI) followed closely by the Bank of Canada meeting. I went over both of these in depth and detail in my Weekly Outlook, but what the heck – I get paid by the word anyway, so let’s review them. (No I don’t, really.)

The US CPI is forecast to show prices rising somewhat faster on a yoy basis at the headline level but at the same pace at the core level, suggesting that higher oil prices are probably the villain here. Given the dreadful weather in Texas during the month, that’s no surprise. 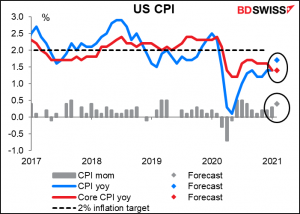 That’s not going to change any views on the Federal Open Market Committee (FOMC), that’s for sure. Fed Gov. Brainard summed up the Fed’s sanguine attitude toward inflation in a recent speech when she said:

“Inflation is likely to temporarily rise above 2 percent on a 12-month basis when the low March and April price readings from last year fall out of our preferred 12-month PCE measure. Transitory inflationary pressures are possible if there is a surge of demand that outstrips supply in certain sectors when the economy opens up fully…But a surge in demand and any inflationary bottlenecks would likely be transitory, as fiscal tailwinds to growth early this year are likely to transition to headwinds sometime thereafter.”

The figure may be important for the bond market however as that market is liable to act in response to higher inflation regardless of whether the Fed acts. An above-expectations figure could cause another leg down in the bond market, with the ensuing chaos in stocks and the FX market following.

As for the Bank of Canada, they’ve pledged to keep rates at “the effective lower bound” until its 2% inflation target is “sustainably achieved,” which they forecast wouldn’t happen until “into 2023.” The Governing Council did add one phrase to their forward guidance that hinted at a possible reduction in its massive CAD 4bn-a-week (at least) bond purchases: it said, “As the Governing Council gains confidence in the strength of the recovery, the pace of net purchases of Government of Canada bonds will be adjusted as required.”

The question then is, will they have gained enough confidence since Jan. 20th to change their pace of purchases? I don’t think things have changed that significantly. While the recovery has outpaced expectations, there are still a lot of concerns about the pandemic, especially given the slow vaccine rollout, the risk of more virulent strains appearing, and a possible third lockdown. Accordingly, I expect them to stand pat at this meeting.

The big question is what if anything the Bank says about the recent rise in bond yields. So far, The Bank of Canada seems OK. Again, in the Q&A after his Feb. 23rd speech, Gov. Macklem was asked specifically about the rise in long-term interest rates. Like Fed Chair Powell, he said it bore witness to the success of fiscal supports and vaccine development and, in turn, to rising inflation expectations. He considered this a good thing. Does he still think so, after his comments sent yields up even higher? We’ll have to see. 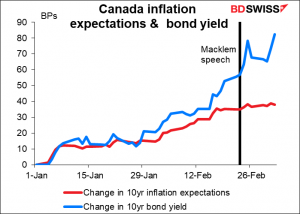 There’s sometimes good volatility around Bank of Canada meetings, even on days when they don’t change policy. 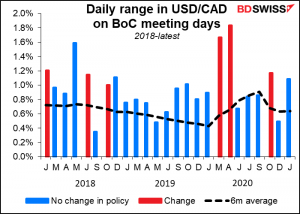 The US budget deficit is expected to widen further. 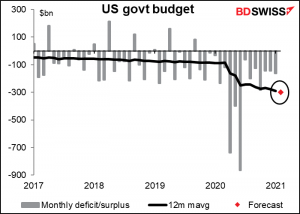 The US is well on its way to another bumper year for bonds. As we used to say back when I was a bond market analyst, “the bond crop never fails.” It remains to be seen though whether we’ll beat last FY’s record. Issuance doesn’t matter for rates however so long as the market is happy to absorb the extra issuance (and the central bank is ready to step in and take up anything left over). Watch the results of the 10-year auction today and 30-year auction tomorrow to see how the market reacts. 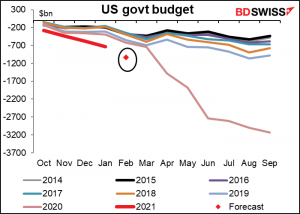 Japan’s corporate goods price index (which Bloomberg insists on referring to in its economic calendar as the producer price index, which is a different indicator, but I’m tired of pointing this out to them) is expected to show a third consecutive healthy mom increase. Like yesterday’s China producer price index, which rose a higher-than-expected 1.7% yoy ( 1.5% expected), producer prices seem to be rising as the change in patterns of demand caused by the pandemic cause bottlenecks and higher prices for some goods & services – not to mention higher energy prices.

In the case of Japan though higher corporate goods prices probably only means compressed margins for companies, not higher inflation generally, so I think this indicator is more important for the stock market than for the FX market. 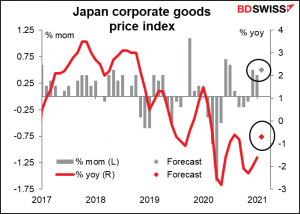 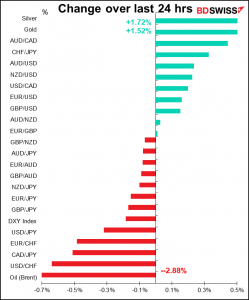