CHF Up on Expectations of SNB policy shift, USD Down 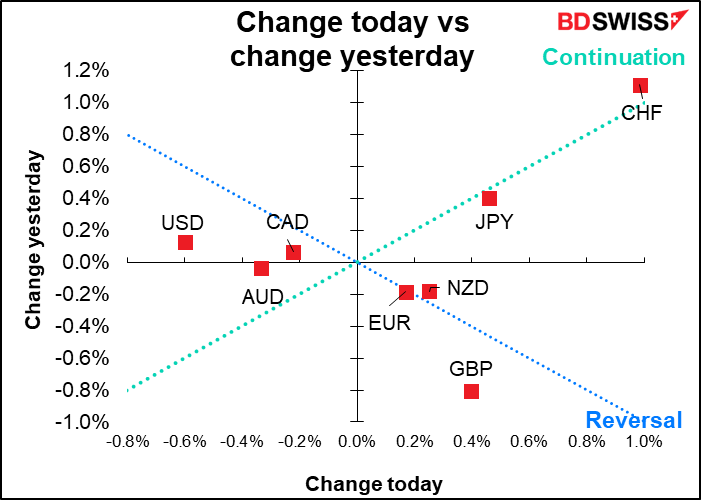 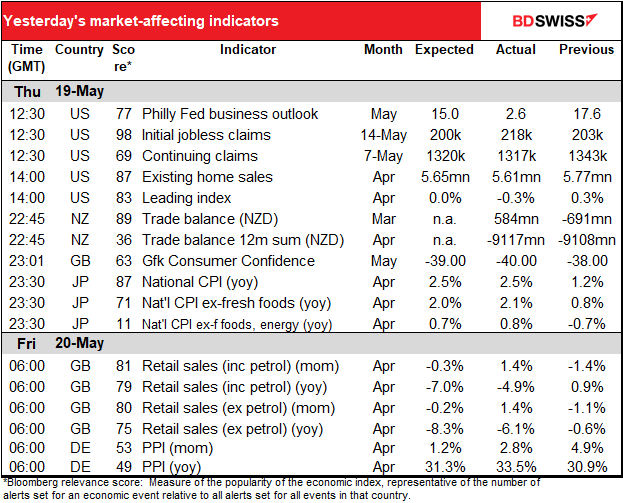 The fall in US stock prices doesn’t seem to be disturbing the Fed. Kansas City Fed President George (V) said that recent equity market volatility was “not surprising” and that while policy isn’t aimed at equity markets, “it is one of the avenues through which tighter financial conditions will emerge.” In other words, there’s no sign yet of the Fed being unhappy about tighter financial conditions, which in any case are still around average – not yet “tight.” 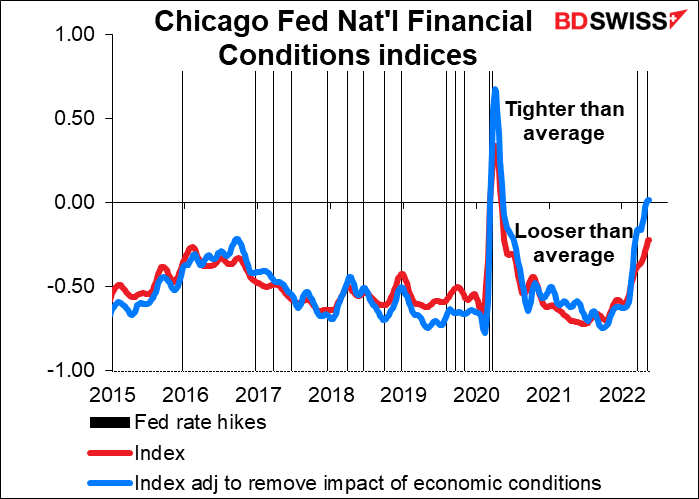 Even Minneapolis Fed President Kashkari, the #1 dove on the FOMC, said he wasn’t sure how high rates would ultimately need to go and seemed OK with precipitating a recession. “We know we have to get inflation down; we are doing everything we can to achieve a ‘soft landing,’ but I’ll be honest with you: I don’t know the odds of us pulling that off,” Kashkari said. If this is what the doves are saying, what are the hawks thinking?

This morning it’s a sea of green in Asia as all stock markets there are higher. Chinese banks cut their five-year loan rate, which is used to price mortgages, by more than expected (analysts expected a 5 bps cut, they cut by 15 bps).

Here’s a graph of the prime rates since the system began in August 2019. This must qualify as among the most boring graphs that I have. 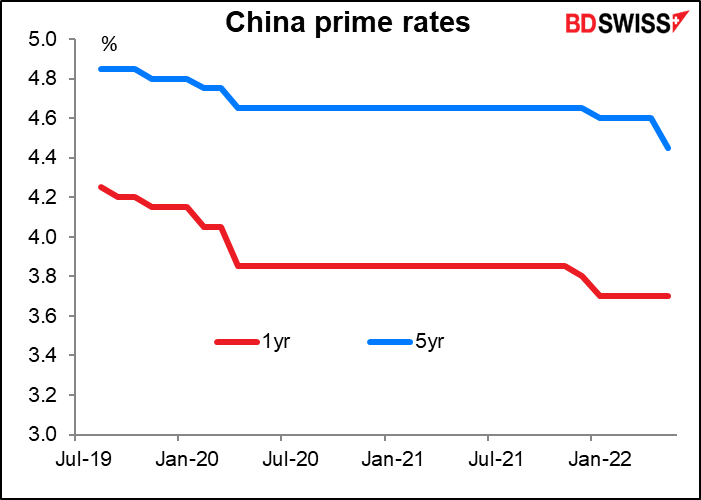 In the FX market, the star of the show is CHF, which continues to benefit from yesterday’s comments by Swiss National Bank (SNB) President Jordan, who hinted at a change in policy as inflation remains above the SNB’s 2% ceiling. There’s a lot of speculation that if the European Central Bank (ECB) embarks on its rate-hiking cycle in July, as is widely anticipated, the SNB will move at its meeting in September to start normalizing its rates from the lowest in recorded history.

I’ve written extensively about this possibility in my Weekly Outlook for next week, which should be hitting your inbox sometime in the next few hours, so I won’t go into detail here.  Please read about it there because if no one reads my weekly I’ll be out of a job and my wife will divorce me and my older daughter will have to drop out of university and, well, it will be an all-around disaster for me. Only my younger daughter will emerge unscathed. She’s working in Switzerland so she’ll be doing quite well.

On the other hand, USD came off yesterday as the US indicators disappointed. Initial jobless claims were higher than expected while the Philly Fed index fell much more than expected (although not as much as the Empire State index did on Monday). These two surveys suggest that the Institute of Supply Management (ISM) May Manufacturing purchasing managers’ index (due June 1) will fall a significant 4.4 points. 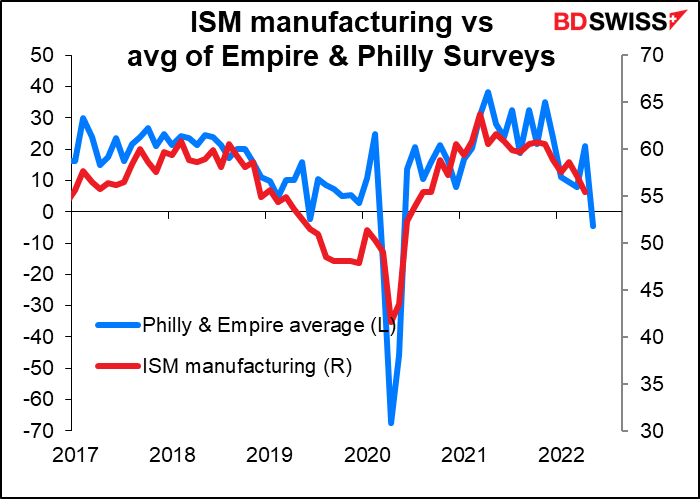 Furthermore, existing home sales also fell more than expected and the leading index fell month-on-month. (All this data is in the wonderful table above.) So a full card of disappointing US statistics led to a rally in bonds, although the US was by no means the leader of the pack.

I can’t find any reason why gilts were the outlier in the global bond market rally. 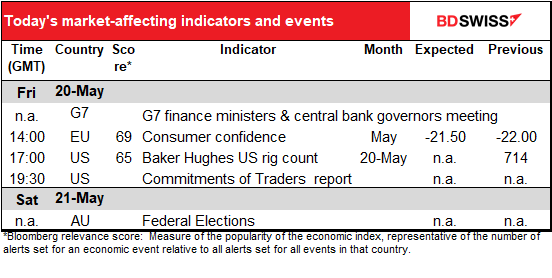 After a fairly busy week, there’s precious little on the schedule today. But since I get paid by the word I’m going to have to write something or else I won’t be able to afford lunch. Maybe I should write about my experiences fasting?

There’s been a three-day meeting of the G7 finance ministers and central bank governors going on in Germany. It ends today. The joint communique will be published and there will be a press conference at which German Finance Minister Christian Lindner and Bundesbank President Joachim Nagel will present the G7’s main positions. I don’t have it on the schedule because Bloomberg’s calendar is organized by country and events that include more than one country inevitably fall through the cracks and never show up. I’ve complained many times to the people who make the calendar but to no avail.

In any event, I don’t expect any fireworks (there rarely are at such meetings). A French finance ministry official Wednesday said they plan to restate previous commitments, so nothing new.

There was some thought that the group might make some wiggle room for Japan to intervene to support the ailing yen, but Japanese Finance Minister Shunichi Suzuki said he hoped the group would reaffirm its existing agreement on exchange rates. The agreement, as set out in the May 2017 communique, said that they are committed.

to market determined exchange rates and to consult closely in regard to actions in foreign exchange markets. We reaffirm that our fiscal and monetary policies have been and will remain oriented towards meeting our respective domestic objectives using domestic instruments and we will not target exchange rates for competitive purposes. We underscore the importance of all countries refraining from competitive devaluation. We reiterate that excess volatility and disorderly movements in exchange rates can have adverse implications for economic and financial stability.

My question is, why does Japan want to see this reaffirmed? On the one hand it encourages “market determined exchange rates,” which means FX market intervention is a no-no. On the other hand, it stands against “excess volatility and disorderly movements,” which in the past Japan has used as an excuse for intervening (“excess” and “disorderly” are code words for “the currency moved further than we think it should”). Bloomberg says the agreement will make it more difficult for Japan to intervene, but I don’t think they’d call for it if that were the case. I suspect that they want to use this “excess volatility and disorderly movements” clause as a pretense to intervene.

I doubt if such intervention would be successful in halting the decline of the yen however. It might slow it, just as the Swiss National Bank’s intervention has slowed the appreciation of CHF but hasn’t stopped it.

In the past, Japan has intervened to stem the yen’s decline against the dollar between ¥121 and ¥141, with the largest intervention around ¥128. 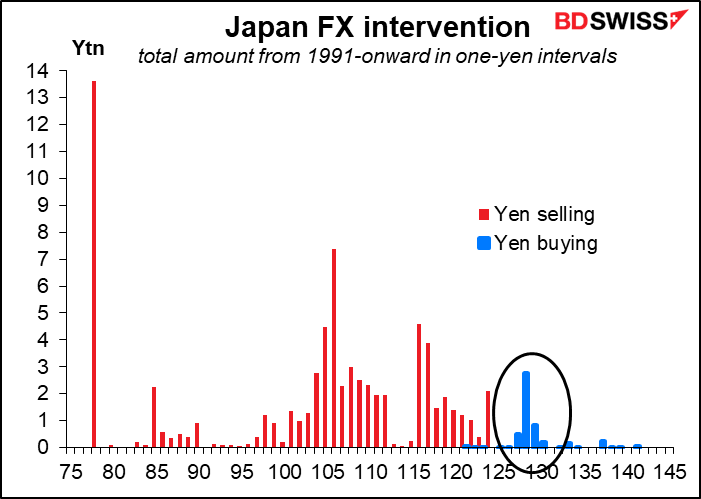 Then over the weekend there will be Federal elections in Australia. Australians will vote for all the seats in the House of Representatives and just over half the seats in the Senate. Whichever party wins a majority of the 151 seats in the House forms the next government. Opinion polls indicate that the center-left Labor party is likely to win a narrow majority, meaning that Labor leader Anthony Albanese would replace PM Scott Morrison, who has been in charge since 2018. However, the polls were wildly inaccurate last time so one never knows.

The main areas of debate between Labor and the ruling Liberal-National Coalition centers around their policy toward China and climate change, not their economic policies, and so it’s unlikely that there will be a significant market reaction, at least initially. The main risk to the market is that neither major party secures sufficient support for an outright majority, leading to a few days of negotiations and uncertainty over the shape of the next government. In 2010 for example the negotiations dragged out for two weeks. Otherwise we should know by the time markets start up again on Monday.

The only indicator on the schedule today with a forecast is EU consumer confidence, which is not particularly market affecting. It’s expected to improve a tiny bit. Perhaps energy prices will have to fall back more before we can see a bigger improvement. 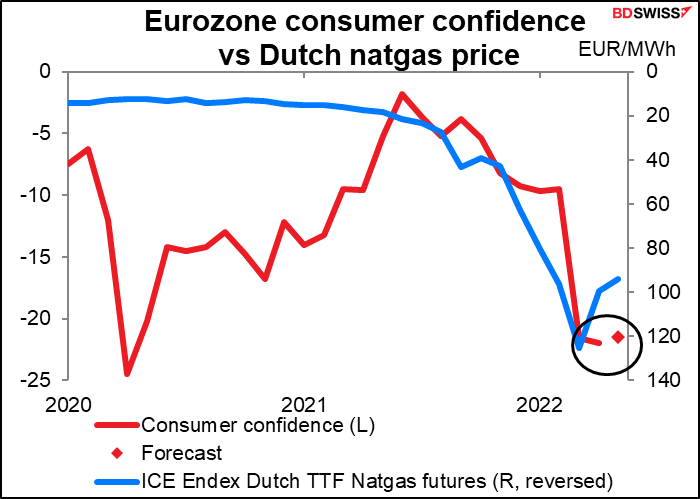 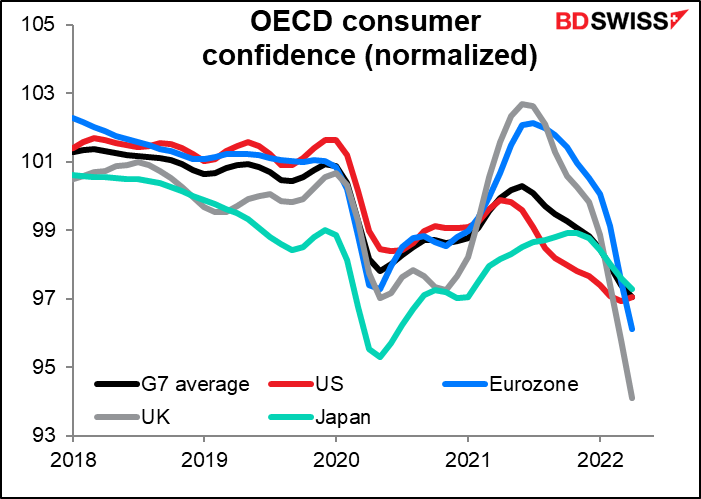 I haven’t written about the Baker Hughes rig count for quite some time either so I might as well do that too. It’s been creeping up steadily – this year it averages an increase of 6.7 a week. But it remains well below the pre-pandemic level, as does oil production. 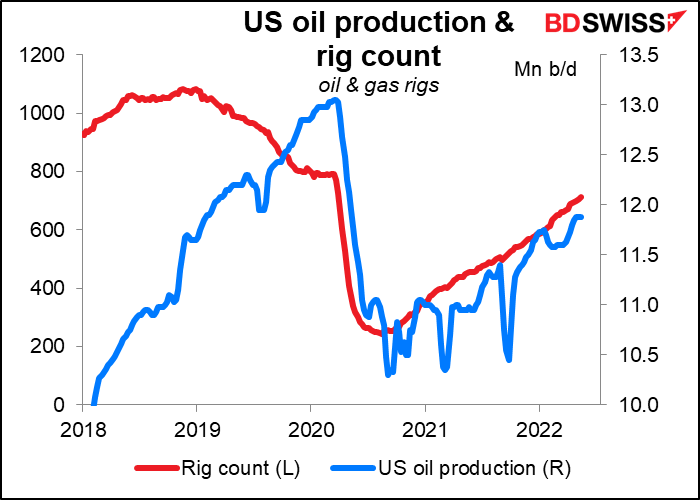 Why is that? According to a recent survey by the Dallas Fed, the reason is simple: investors. Investors want to see profits, not barrels. 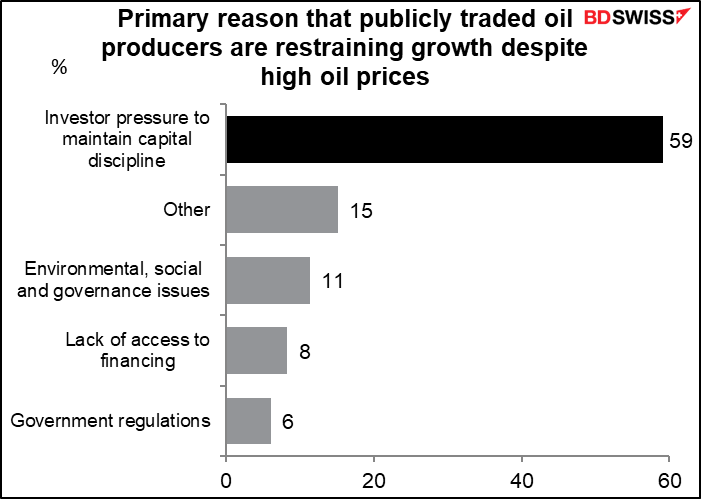 Although 61% of respondents say that today’s price of $108 should be enough to get producers back into growth mode, a significant (29%) percentage say that price doesn’t matter. Moreover, the price has been above $80 a barrel almost all this year and so far little response, so I suspect that as the price moves up, so too do peoples’ estimates of what price it would take to get them to produce. 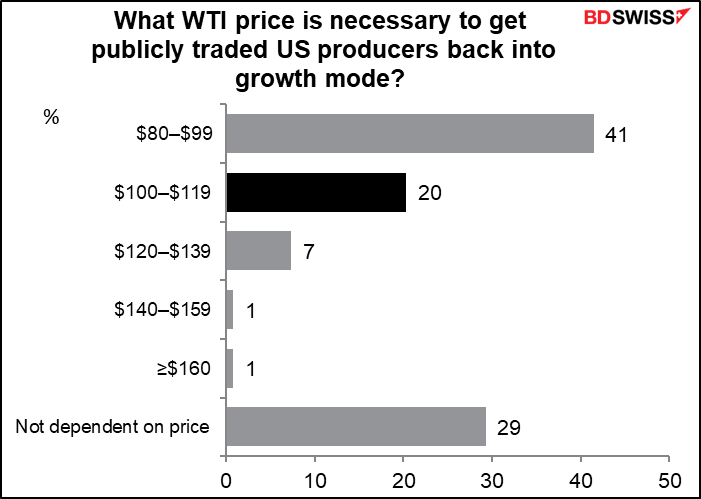 That may be because each rig is becoming less productive and therefore less profitable. 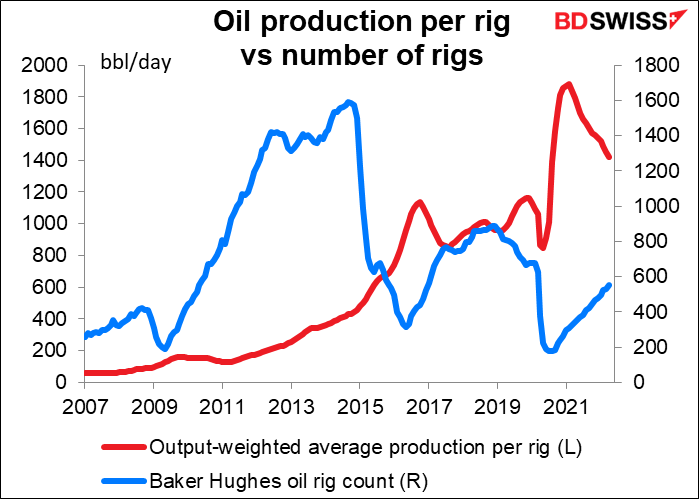 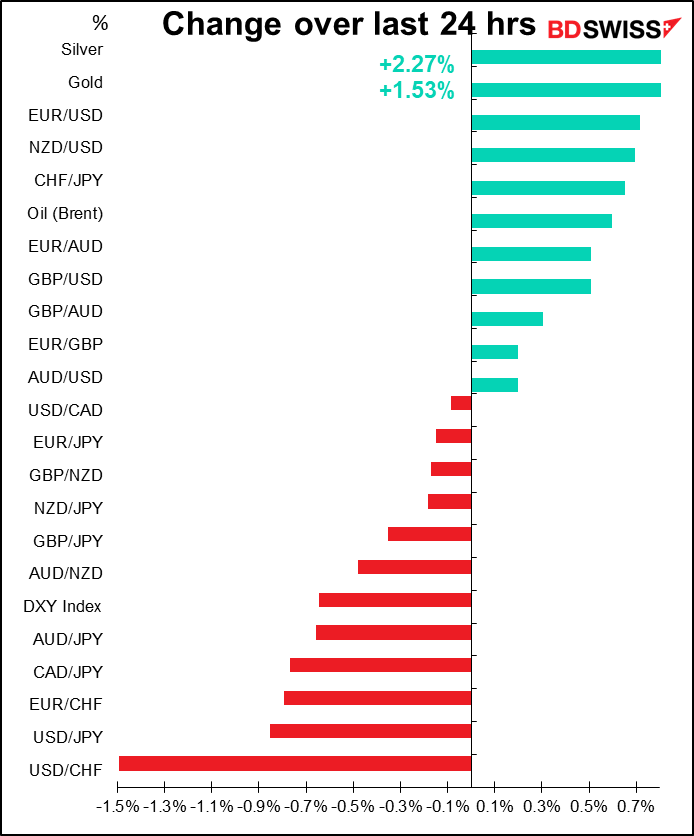