News from Ukraine remains the dominant topic on the financial markets but by no means the only one. Also noteworthy is the increased pressure on Chinese companies, which has intensified since February 17th, almost exactly one month ago. 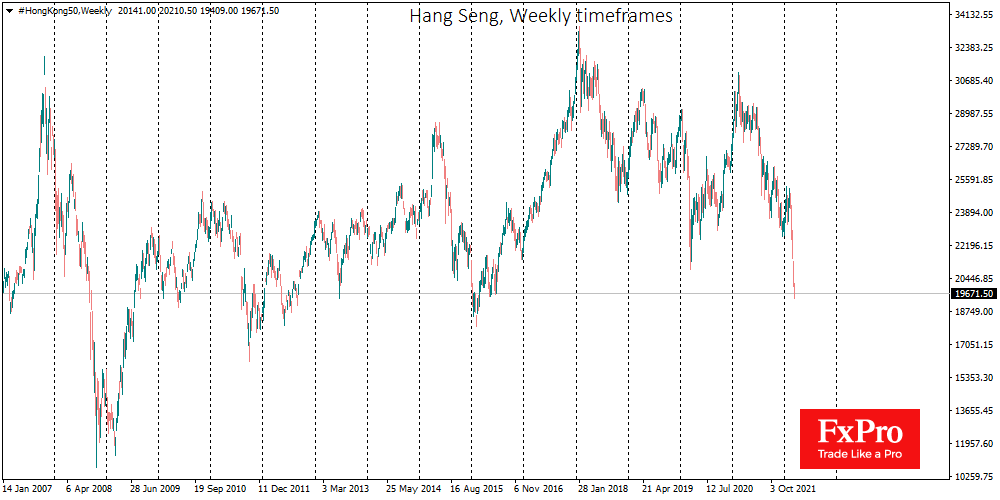 In that time, the Hang Seng has lost more than 20% and in Monday’s trading was below 20,000 for the first time in six years. This is an important support area of the last ten years near which the market has previously found support. In all, the drop from the peak in February 2021 represents a fall of more than 40%.

The pressure on the Chinese market is due to four factors simultaneously. Firstly, the military crisis in Ukraine is exacerbating logistical problems and causing higher prices for raw materials and agricultural products, which are hitting local companies and households far higher than in developed countries.

Secondly, China remains committed to a zero-tolerance approach to COVID-19, once again closing multi-million-dollar areas to contain the outbreak. While Europe and the US are smoothly removing restrictions because of the pandemic, they are the toughest in China since 2020.

Thirdly, there continues to be a mass exodus of investors due to fears of delisting several Chinese companies from US exchanges. The technology sector of Chinese companies is caught between a hammer and anvil as it previously faced regulatory pressure domestically and now has the biggest investor outflow.

Fourth, even in peaceful times and without the regulatory guillotine, capital traditionally flees emerging markets in the early stages of a reversal in monetary policy. The first Fed rate hike since 2018 is expected this week. Higher inflation is shaping expectations that central banks will act more aggressively than previously anticipated, further shaking out weak players from the market.

Those investors trying to see signs of a bottom forming in Chinese assets are likely to watch the market’s reaction to comments from the Fed, Bank of England, and Bank of Japan later this week with heightened scrutiny. If regulators focus solely on fighting inflation, the sell-off promises to intensify. If there is more focus on financial stability risks and already observed tightening of financial conditions, we could see attempts to form a bottom.