On Tuesday I said that the stock market was no longer signalling “risk-on” or “risk-off,” but rather “rotation.” Yesterday though the indices were generally higher, and the FX market exhibited a classic “risk-on” profile, with the three commodity currencies on top and USD, CHF and JPY on the bottom.

After one day of recovery in the tech stocks, the stock market was back to selling them. The NYSE FANG , an index of the biggest 10 tech stocks, jumped 6.5% on Tuesday, but yesterday the index fell 1.4%. Other sectors were up though – for the S&P 500, technology hardware & equipment (-0.6%) and semiconductors & semiconductor equipment (-1.4%) were the only two of the 26 broad industry groups in the index to decline. The Dow Jones Industrial Average, not the best-constructed stock index but popular with the public, was up 1.5% to close at a record high, while the NASDAQ was down marginally (-0.04%).

Treasuries were relatively quiet, with 10-year yields down less than 1 bp despite a 5 bps rise in 10-year inflation expectations. This followed a slightly softer-than-expected US consumer price index, with the core CPI rising 0.1% mom vs 0.2% expected. Yesterday’s potentially apocalyptic $38bn auction of 10-year notes went off smoothly as prices continued to rise after the auction. Bunds and Gilts yields were also a bp or two lower. There’s a $24bn auction of 30-year bonds today.

The dollar’s weakness – bottom of the list on my chart of trade-weighted indices – was significant in that it followed some excellent news about US growth. The House of Representatives passed President Biden’s enormous $1.9tn fiscal support package, on the same day that the Organisation for Economic Co-operation and Development (OECD) said in its Interim Economic Report that the package, plus faster vaccination, “could boost US GDP growth by over 3 percentage points this year, with welcome demand spillovers in key trading partners.” It estimated that spillovers would lift global growth by 1 percentage point this year. Furthermore, there’s already talk of President Biden’s infrastructure package, which is rumored to be as much as $2.5tn over four years, with some public-private partnerships that could leverage government spending.

The significance is that usually, USD gains when US outperforms on growth. But it didn’t seem to work yesterday. Is that because the passage of the package was well discounted already? If so, perhaps US growth outperformance is already discounted too. 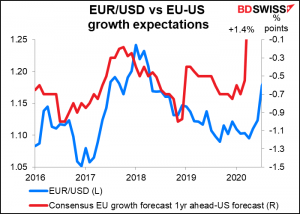 The OECD said, “There are increasing signs of divergence across countries and sectors. Strict containment measures will hold back growth in some countries and service sectors in the near term, while others will benefit from effective public health policies, faster vaccine deployment and strong policy support.” This growth divergence is likely to lead currency divergence as well, with the growth-sensitive commodity currencies outperforming the safe-haven JPY and CHF, in my view.

The big question for the FX market is whether the growth divergence or the safe-haven aspect dominates for the US. I think one major way that growth feeds through to FX is through monetary policy, and I expect US policy to remain loose longer than the market does – I think the Fed has shifted gears to supporting employment rather than fighting inflation and will not start raising rates as early as the market currently expects.

Although I must admit there’s one highly influential person who disagrees with me: Treasury Secretary Yellen yesterday was touting the Administration’s fiscal support package and saying that it could allow the labor market to recover to full employment by the end of next year. That would allow the Fed to start normalizing policy in 2023, as the market currently anticipates. She has a PhD in labor economics so her view on these sorts of things should carry some weight, although of course as an administration official now she also has a political role to play.

JPY outperformed CHF. The Japanese business newspaper The Nikkei reported that when the Bank of Japan (BoJ) revises its operational details at next week’s Monetary Policy Meeting, it’s likely to revise its statement on Yield Curve Control to “acknowledge yields moving in a certain range.” The article made it seem as if the BoJ would widen the 10-year bond’s trading band, currently limited to ±20 bps around zero. That would allow yields to rise further than they have and reduce the attractiveness of overseas markets. However, the “certain range” is certainly not going to be anything like that of other countries, where 10-year yields have risen as much as 80 bps so far this year. Even if it widens to ±30 bps, so what? They’re still restricted in this band, whereas other countries’ yields have the potential to go much higher. I don’t think a widening of this range would change the longer-term negative outlook for JPY. 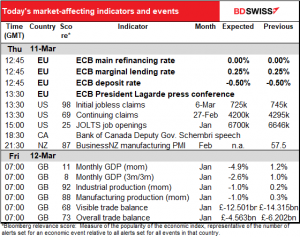 The big event today is the European Central Bank (ECB) meeting. As usual, I covered this event in excruciatingly minute detail in my Weekly Outlook, even down to what scarf I expect ECB President Lagarde to wear, so I’ll just summarize what I said. In short, I don’t expect them to do anything. They just “recalibrated” all their tools in December, it’s too early to think about doing it again.

Again, like with yesterday’s Bank of Canada meeting, the big question is what they think about the recent rise in bond yields. But unlike the Bank of Canada, which yesterday said that higher yields were not a threat to financial conditions (“Global yield curves have steepened, largely reflecting the improved US growth outlook, but global financial conditions remain highly accommodative”) the ECB Governing Council is clearly worried about them. The account of the ECB’s January meeting said that “it was important to monitor the recent increase in nominal risk-free rates.” Since then, the verbal intervention has only intensified, with half of the Executive Board – Lagarde, Lane, and Schnabel – specifically commenting disapprovingly on the subject. Policymakers have signalled that they’re willing to use the Pandemic Emergency Purchase Program (PEPP) to fight the trend if necessary
The main debate at this meeting will be how to respond to these higher rates. I would expect some saber-rattling at this point but no concrete action yet. They are likely to stress their willingness to take further action if necessary, though. Some possible things they could do: step up the pace of purchases from the PEPP, extend the program beyond its current end-date, concentrate purchases in a specific country if spreads begin to widen out, or maybe even “twist” their purchases by buying longer-dated bonds.

If they do take any of these actions though, I think the market reaction would be swift and large. The contrast between the Fed’s laissez-faire attitude and the ECB’s active stance would probably push EUR/USD lower.

You can see that there is often greater-than-usual volatility in EUR on ECB days, even when they don’t change policy, although recently it’s been muted, perhaps because the changes are so minor compared to what happened earlier in the year or, in the case of December’s “recalibration,” so well telegraphed ahead of time. 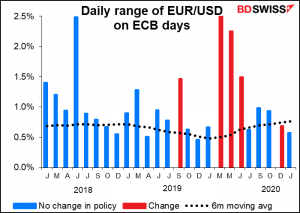 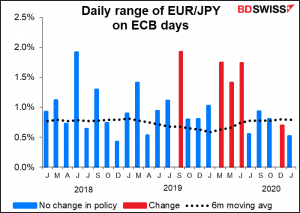 After the ECB we get the dreaded weekly initial jobless claims from the US. They were up last week, although not as much as expected. This week they’re expected to be down a pathetic 20k, which is nothing compared to how many people are claiming every week. At this pace it’ll be another six months before they come back down to the level that they were before the pandemic began. 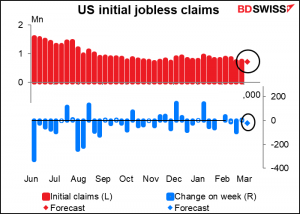 Continuing claims are expected to be down by 95k, which is also not so great. 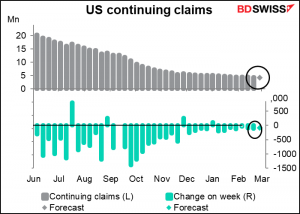 Speaking of employment, shortly after the jobless claims comes the Job Openings and Labor Turnover Survey (JOLTS) report. The number of job openings is expected to be about the same as in the previous month. That’s disappointing, but with the number of unemployed persons falling, the job openings-to-unemployed ratio rises to 0.66 from 0.62, the highest it’s been since the pandemic hit. We take good news where we can find it. Nonetheless I think this number, combined with a relatively small decline in jobless claims as mentioned above, could reinforce the idea that the job recovery – which is what the Fed wants to see – is liable to be slow at best. That may be good for the US Treasury market, which could actually be good for stocks and negative for the dollar. 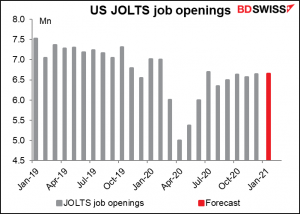 Other things on the schedule today include OPEC’s monthly Oil Market Report and overnight, the conclusion of China’s National People’s Congress.

Then tomorrow in the early early morning, Britain has its short-term indicator day, when they announce monthly GDP, industrial & manufacturing production, and trade statistics.

The monthly GDP is expected to be appalling, but you knew that, didn’t you? Everyone did. The country went into lockdown in January, so what else do you expect? Get real. Accordingly, I don’t think it will affect sentiment toward the pound that much, because everyone is looking for the recovery, not the decline. The lockdown in January set the stage for the recovery later on. 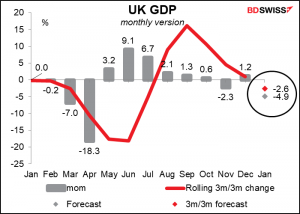 Industrial and manufacturing production are both expected to be down 1.0% mom, less than the overall fall in GDP, no doubt because the lockdown hits the service sector more than the manufacturing sector. 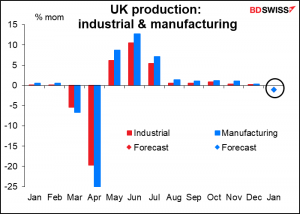 While not as good a rebound as the US or Japan, Britain would be in about the same situation as Germany if the forecast is accurate. That’s not a disastrous place to be. 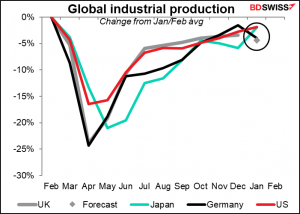 The market is expecting a substantial improvement in the trade account in January. This strikes me as bizarre, given all the unexpected problems that exporters encountered once Brexit took place. But perhaps importers were hit with even more problems and imports fell more than exports.

The data I’ve seen however says otherwise. German exports to the UK fell by 29% yoy while imports from the UK were down 56% yoy. For Italy, exports to the UK were -38% yoy and imports -70%. For France they were down 13% vs the average of the previous six months vs -20% for French imports from the UK. In all these cases, the decline in trade with the UK was much steeper than the decline in trade with other countries. For example, for Germany, exports to other non-EU countries besides Britain fell by 10.3% yoy and imports by 13.9% yoy, while exports and imports to other EU states were down by around 6%.

Some of this may be the result of stockpiling ahead of Brexit, when companies anticipated disruption and so prepared ahead of time. That may mean they needed to move fewer goods during January. Also the country went into severe lockdown during January, which disrupted trade. However, it’s clear that there were also what the government euphemistically called “teething problems” during the month. These seem to have continued in February — the UK manufacturers’ purchasing managers’ index (PMI) for supplier delivery times during the month saw the third biggest rise in supplier delivery times on record since 1992. About 58% of companies reported longer delivery times from suppliers while only 2% saw an improvement. 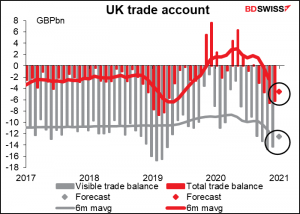 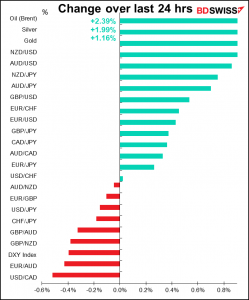