Commodity Currencies Up, JPY Down in “Risk-On” Market 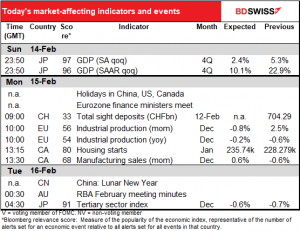 It’s off to the races! Looking at the stock market pages on Bloomberg, every one is green. I’m sure I must have seen that before, but it’s rare. 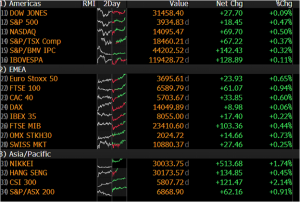 And today in Asia too: 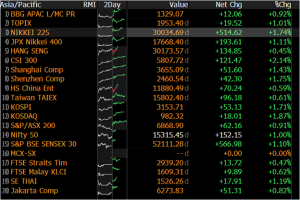 The Nikkei index of Japanese stocks broke through 30,000 today. The last time it was at this level was Aug. 2, 1990. The market gapped higher at the opening after Japan’s Q4 GDP came out at 3.0% qoq, beating estimates of 2.4% qoq. The big surprise was in business investment, which rose 4.5% qoq vs 2.4% expected. People often say that “stocks always go up in the long term,” to which I have always responded: which stocks? How long? Because I was working in Tokyo on Dec. 29th 1989 when the Nikkei closed at its record high of 38,916. I haven’t seen that number again yet. (The TOPIX index, a better-constructed index, hit its record close of 2,885 on Dec. 18th. It’s currently at 1,954.) So please don’t think that “stocks always go up in the long term” is like a law of physics that holds everywhere and at all times, such as F=MA or something like that.

In this ultimate “risk-on” mood, the commodity currencies were the winners and the safe-haven USD, JPY and CHF the losers, as one might expect.

GBP was the best-performing currency despite all its economic problems as the country continues to do one thing right: vaccinating its people. The government has now delivered 15 million vaccinations and ministers say it’s on track to meet its pledge of offering a vaccine to everyone in the top four priority groups by today. The number of new virus cases has plunged from a peak of 66,405 a day on Jan. 11th to 13,249 yesterday (seven-day averages). 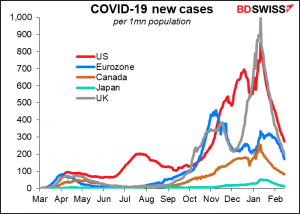 I still think that the Brexit problems are more serious for Britain than the virus. We can hope that the virus will be behind us in the not-too-distant future, but Brexit is going to be a problem for Britain indefinitely. The disruption of trade with the country’s biggest partner is going to have a serious long-term effect on the economy. But right now the news is filled with virus, virus, virus. Only once that calms down and people start worrying about more mundane, boring things, like the lack of EU-compliant pallets, will the everlasting Brexit problems come back into focus.

Oil prices rose as much of the US was gripped with unusually cold weather. In particular, cold weather in Texas may disrupt output from the country’s largest shale oil patch, depressing domestic supplies. West Texas Intermediate (WTI) surged above $60 a barrel for the first time since January of last year. Higher oil prices and the improving virus outlook should boost CAD, in my view.

With stock markets up and oil prices surging, bond yields rose. Treasury futures fell, although cash trading is disrupted by the President’s Day holiday in the US.

We can expect a fairly quiet day today, with no major indicators and both the US and Canada on holiday. Note though that although it is a statutory holiday in Canada, it is not a federal statutory holiday and therefore federal workers don’t have the day off. That’s why there are two Canadian indicators out today despite the holiday.

The Eurogroup, a group comprised of the Eurozone’s economic and finance ministers, holds a virtual meeting today, while the Economic and Financial Affairs Council (ECOFIN), which is the Eurogroup plus the non-euro EU members, holds a virtual meeting tomorrow. I don’t know about the agenda for today’s meeting, but the calendar of the General Secretariat says that at tomorrow’s meeting, “Ministers will focus on economic recovery in the EU, including the current economic situation and the implementation of the Recovery and Resilience Facility. They will also cover international issues, the EU list of non-cooperative tax jurisdictions and issues linked to the annual EU budget.” I would assume that the Eurogroup ministers will discuss the same. 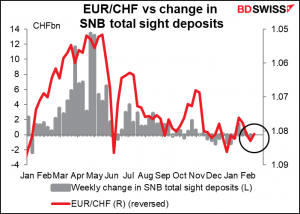 Eurozone industrial production is expected to decline mom, the first fall since the big collapse in March/April. 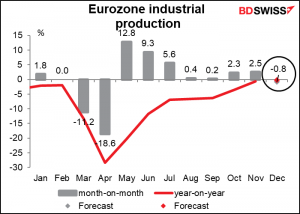 Still even on that assumption, the EU would be doing slightly better than its global competitors – including Germany. But it bodes ill for January, when output probably fell further owing to the lockdown across much of the EU. 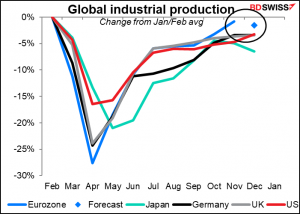 Then it’s onto the Canadian indicators.

Canadian housing starts are expected to be more or less in line with the six-month moving average, so showing almost no change in the upward trend. This is in line with the Bank of Canada’s view in the January Monetary Policy Report, where they said

Demand for housing has continued to show resilience, despite increasing
case numbers and tightening restrictions. The level of housing activity should
remain elevated into the start of 2021, supported by low borrowing rates and
resilient disposable incomes. Changes in homebuyers’ preferences have also
played a role. For example, price growth has been strongest for single-family
homes and in areas outside city centres

It seems that not only financial factors (low rates, high incomes) but also the global trend out of cities and into the suburbs are at work here. Strength in housing is positive for CAD insofar as it means further cuts in rates aren’t necessary to support this sector. 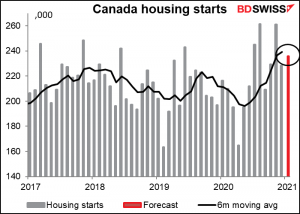 Canada manufacturing sales fell in November but are expected to have recovered in December, leaving sales just 3.1% below the Jan/Feb average. Transportation equipment, such as aerospace products and cars, plus petroleum and forestry products contributed to the increase. But much of the rise was due to inflation, as factory prices were up 0.9% mom excluding energy, so in real terms it wasn’t much of an increase. Nonetheless the FX market tends to ignore such subtleties and, combined with the rise in housing starts, the increase should be positive for CAD. 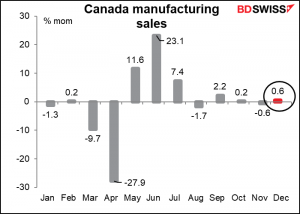 Overnight we get the minutes from the February 2nd Reserve Bank of Australia (RBA) meeting, but we’ve heard from Gov. Lowe twice since then, his “Year Ahead” speech and his testimony to the House of Representatives, plus we got the Statement on Monetary Policy, so I doubt if we’ll learn much new from the minutes. The main point of interest will be why they decided to extend the RBA’s quantitative easing (QE) program at this point.

Japan’s pitiful tertiary sector index (aka service sector) is forecast to decline for the second consecutive month. This would leave it 3.9% below pre-pandemic levels. I doubt if this will move USD/JPY however. 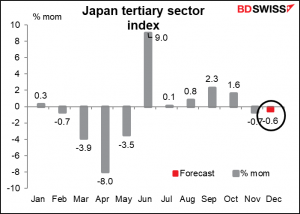 Looking at the service-sector purchasing managers’ indices, Japan’s service sector isn’t doing great but could be doing worse – it’s about the same as the EU as a whole and not as bad as the UK, which has been declining for months. Japan simply failed to recover completely and has since been moving sideways. 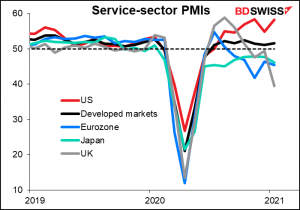 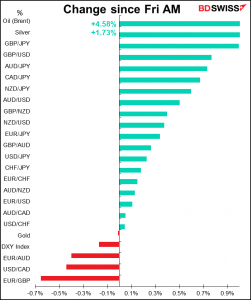