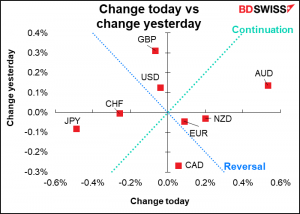 The theme song of yesterday’s meeting of the Federal Open Market Committee (FOMC) was clear and simple: I want to take you higher. I’m surprised the reporters weren’t throwing the peace sign and yelling “boom-a-lacka” back at Fed Chair Powell during his press conference.

As expected, the Committee doubled the pace of tapering to $30bn a month, setting the stage for them to end their bond purchases – and perhaps start hiking rates – next March “should conditions warrant,” according to Chair Powell. The big surprise was that they pencilled in three rate hikes for next year, not two as expected. On the other hand, they only see two hikes in 2024, not three as before, so the terminal rate (as far as we know) would be the same as the market anticipated. 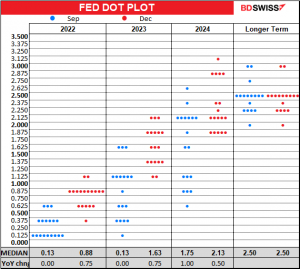 There was no change in their estimate of the longer-run level of rates. 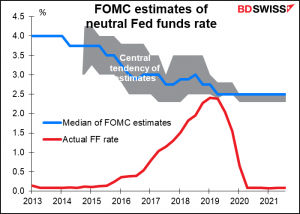 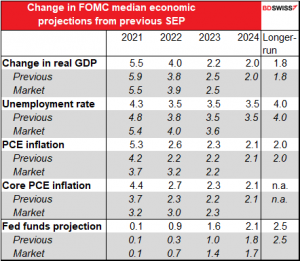 Powell emphasized how much stronger this cycle is than the last. What that means is that the last cycle gives us no guidance as to how long the Fed will wait to hike after tapering ends or to reduce its balance sheet after it begins hiking. The statement made it clear that “lift-off” depends on the labor market (“the Committee expects it will be appropriate to maintain this target range until labor market conditions have reached levels consistent with the Committee’s assessments of maximum employment.”) Fed Chair Powell’s comments in the press conference implied that things are moving pretty rapidly in that direction. He said that while the labor force participation rate has been disappointing, almost every other measure of the strength of the labor market has been strong and could create upside risks to inflation if wage growth starts to rise above productivity growth.

In the 2013/2016 cycle, the Fed started tapering in December 2013 and finished in October 2014. They didn’t start hiking rates though until December 2015, over a year later. They continued to reinvest maturing bonds to keep the size of their balance sheet relatively stable and didn’t formally start reducing it until October 2017, three years after they finished increasing it and after four rate hikes. 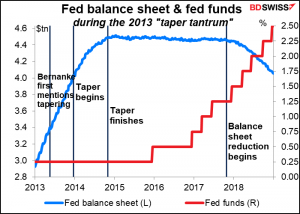 Elsewhere, it was generally a “risk-on” day despite the Fed’s more-hawkish-than-expected tone. US stocks had their best day in two months and oil gained, probably as a result of the upgrade in the Fed’s growth forecast. In FX it was a typical “risk-on” pattern in the FX market, with the commodity currencies up and the safe-haven JPY and CHF down.

Surprisingly the dollar didn’t gain from the Fed’s more hawkish near-term forecasts, but I think the rest of today will show that the monetary policy divergence theme is still in play and the dollar is likely to continue to gain. 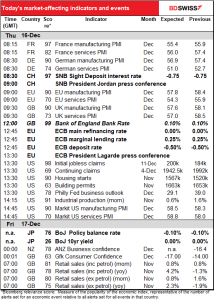 I don’t remember too many days when the schedule looked like this. I think all the central banks are trying to get in their last meeting of the year before breaking for Christmas. There are three major European central bank meetings today (plus Norges Bank, which I don’t cover) plus the Bank of Japan overnight.

I covered the thousand details and dispelled the ten thousand mysteries in my Weekly Outlook: A Busy End to the Year. I don’t want to repeat everything I said there, so I’ll just go over the main points.

Swiss National Bank: the big mystery is whether they’re still intervening. Will they repeat their boilerplate mantra that the General Council “remains willing to intervene in the foreign exchange market as necessary, in order to counter upward pressure on the Swiss franc.” And if they do, how do they square what they say with what they’re doing, which is not too much? Any change in their commitment to their existing policy would be positive for CHF. 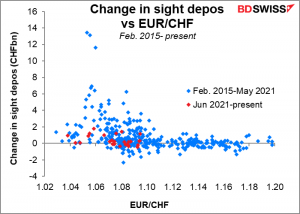 Bank of England: They want to hike rates but they can’t because the Omicron variant is exploding and the government is reimposing restrictions. Will they back off their view that “it will be necessary over coming months to increase Bank Rate in order to return CPI inflation sustainably to the 2% target”? The market is already assuming that the rate hike is only delayed, not shelved, and delayed to the next meeting (February) so it can’t be brought forward. Perhaps they could say something to make people expect a longer or steeper tightening profile, although the market is currently assuming a rate hike at every other meeting next year – a pretty aggressive schedule.

I think it would be hard for the Bank to surprise people on the hawkish side, so the risk I see is a more dovish-than-expected outcome that causes the pound to weaken. But this is a risk, not a forecast. More likely that they’ll just confirm everyone’s existing assumptions and the pound will be little changed. 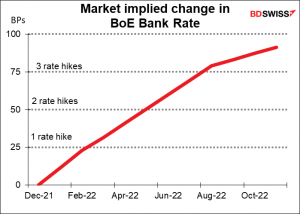 Sorry but the European Central Bank (ECB)’s policy is a hodge-podge of acronyms and policies that can’t be summed up easily. So here’s the short version of what I wrote in detail in the weekly. For an explanation of these programs and what’s going on with them, please see the Weekly.

Assuming that the Council thinks this wave probably won’t be any worse than previous ones, I would expect them to:

● Announce that the EUR 1.85tn Pandemic Emergency Purchase Program (PEPP) will be wound up on schedule at the end of March.
● At the same time, increase the pace of purchases until then because of the risks to growth from the Omicron variant.

Other topics that they could discuss and previously might have decided at this meeting but now are more likely to leave until March include:

● Increasing and perhaps adding some flexibility to the Asset Purchase Program (APP) so that it can take over from the PEPP after the latter has ended.
● What to do about the third targeted longer-term refinancing operation (TLTRO3).

Much will depend on what the new staff forecasts are. Will they continue to see inflation falling back below the 2% target next year? If so, then the Council will probably have to keep an accommodative policy for the time being. That seems like the most likely result. However, several other forecasters see inflation staying above the 2% target next year, which could give the hawks some ammunition. 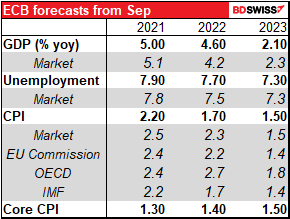 I would also expect ECB President Lagarde to continue to push back against the current market pricing of the first rate hike coming in about a year. 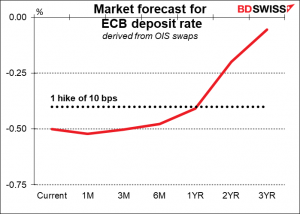 Bank of Japan: nothing much, as usual

Like the ECB, the BoJ will focus on its program to deal with the pandemic, which is the Special Program to Support Financing in Response to the Novel Coronavirus (COVID-19). The program was instituted in March last year at the start of the pandemic and like the ECB’s PEPP, is set to expire at the end of March next year. The facilities haven’t been used that much this year. The part that buys corporate bonds may be allowed to expire as scheduled while they may extend the loan facilities further just in case the Omicron variant turns out to be more dangerous than expected. I don’t think either move will have major macroeconomic implications.

The interesting thing to me will be if they say anything about the surging producer prices, which were up 9% yoy in November. Will that eventually feed through to the consumer price index and push inflation back up to the target? That would be a radical change in the global financial picture.

Failing that though the Bank of Japan will remain the last central bank to start hiking rates and therefore the yen should remain the funding currency of choice.
Today’s indicators

That would be enough for one day, but in fact there’s a busy schedule of economic indicators today in addition to the central bank meetings.

The main thing will be the preliminary versions of the purchasing managers’ indices (PMIs) for the major industrial countries;

Japan’s PMIs both declined, the service-sector PMI rather sharply! 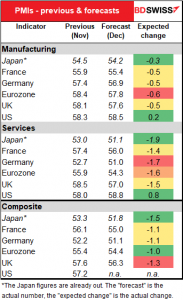 US initial jobless claims have fallen stunningly – last week they reached the lowest level since the 1960s, when by the way the US civilian population was about half what it is today. They’re expected to bounce back a bit this week, perhaps due to bad weather? but still to remain below the four-week moving average, which shows that the trend is improving. “Maximum employment,” here we come! 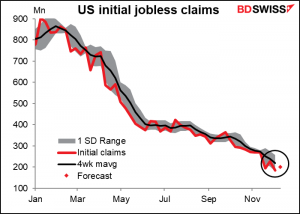 Continuing claims are also expected to decline, as always. 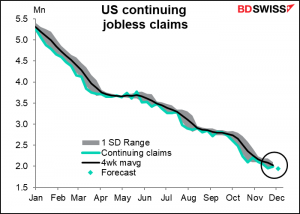 US housing starts have fallen for the last several months but are expected to rise a bit. The trend seems to be more sideways – they peaked in March but have been trending sideways since then, not down. Higher interest rate could cut into the construction market, but there’s also the extremely low unemployment rate and rising wages. I expect construction will hold up against a modest increase in interest rates. 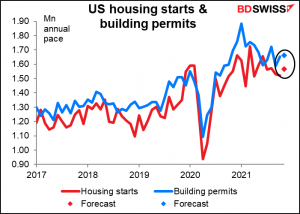 The Philadelphia Fed business outlook is expected to fall somewhat but remain in the recent range. The Empire State index was supposed to fall too, but rose instead. Will the Philly Fed surprise on the upside too? Since the Empire State survey started in July 2001 they’ve only moved in the same direction 52% of the time so it’s pretty much a coin toss. 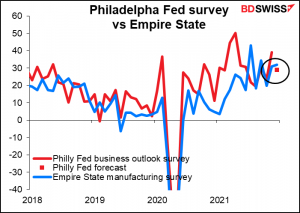 US industrial production is expected to be up a fairly good 0.6% mom – not bad considering the problems the auto industry is facing due to a shortage of chips. That could add to the evidence from the Philly Fed and Empire State indices that the US economy is holding up well = USD 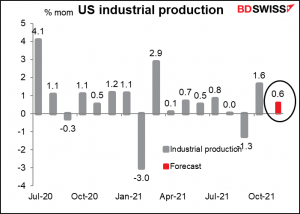 Then we have to wait until early Friday morning for the UK retail sales. They’re expected to be up further, which makes sense given the 4.9% yoy rise in average earnings in the country. Another good data point, following this week’s good employment and relatively high inflation data, to support the Bank of England hiking at its next meeting. 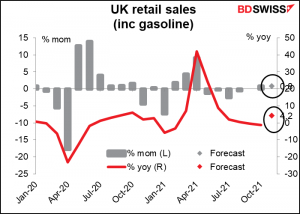 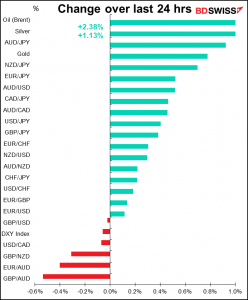