Commodity Currencies Up, USD Down, Bank of Canada Taper Talk 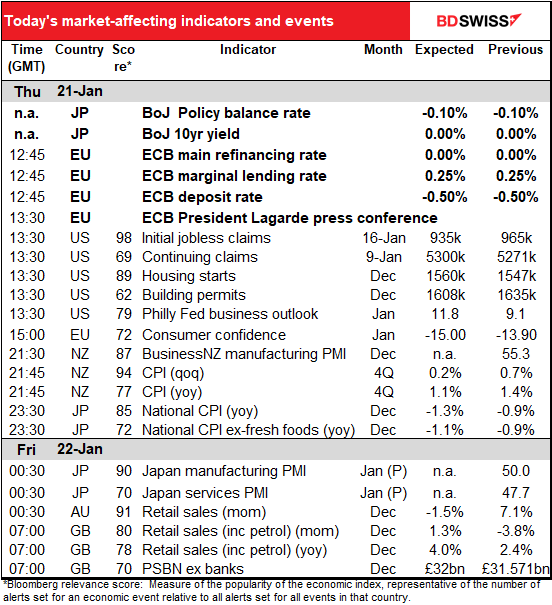 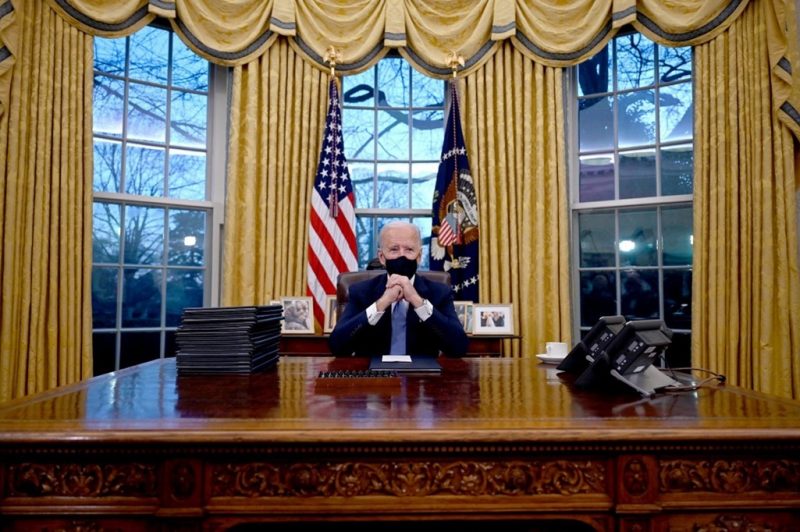 The Bank of Canada sent a stronger signal to the market than I had expected. Their move may be a clue to what’s going to happen in the future with other central banks.

While the Bank kept their policy unchanged, they upped their forecasts and tweaked their “forward guidance” with regards to their bond purchases. (For those who don’t want to read their full Monetary Policy Report, they’ve made a 60-second video with the headlines.)

They continued to say that they will keep interest rates steady until their 2% inflation target is “sustainably achieved,” which they don’t expect to happen “until into 2023.” No change there. However, they did change their guidance with regards to their CAD 4bn-a-month bond purchases. In December they said,  “…the Bank will continue its QE program until the recovery is well underway and will adjust it as required to help bring inflation back to target on a sustainable basis.”  This implied that they’ll increase it if necessary.

This month however they changed it to “…the Bank will continue its QE program until the recovery is well underway.  As the Governing Council gains confidence in the strength of the recovery, the pace of net purchases of Government of Canada bonds will be adjusted as required.”  This implies that they’ll cut back on the bond purchases when they think it’s appropriate.

In the words of Fed Chair Powell, they’ve begun “thinking about thinking about” tapering down their bond purchases.

The Bank of Canada is certainly the appropriate central bank to start thinking about this. The expansion of their balance sheet over the last year has left the other major central banks in the dust, up 4.6x what it was at the beginning of the year, vs 1.8x for #2, the Reserve Bank of Australia (RBA) and 1.75x for #3, the Fed. 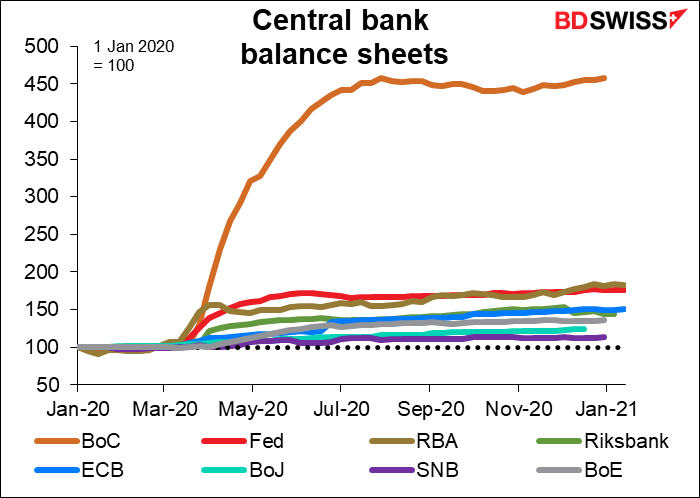 If other central banks also started thinking about this, how would it affect their currencies? We can gauge that by looking at the difference between their actual policy rates and their “shadow” policy rates. The “shadow” policy rates take into account the impact that their quantitative easing programs have on their bond markets and therefore on overall monetary conditions. What we see is that its massive QE program has had relatively little impact on Canadian monetary conditions compared to other countries, so unwinding that policy will also have relatively little impact. The biggest impact of extraordinary monetary policies has been in New Zealand and Australia. That may be one reason why NZD, not CAD, was the best-performing currency over the last 24 hours. If the Reserve Bank of New Zealand makes a similar change at its next policy meeting (Feb. 24), that could have a large impact on NZD. 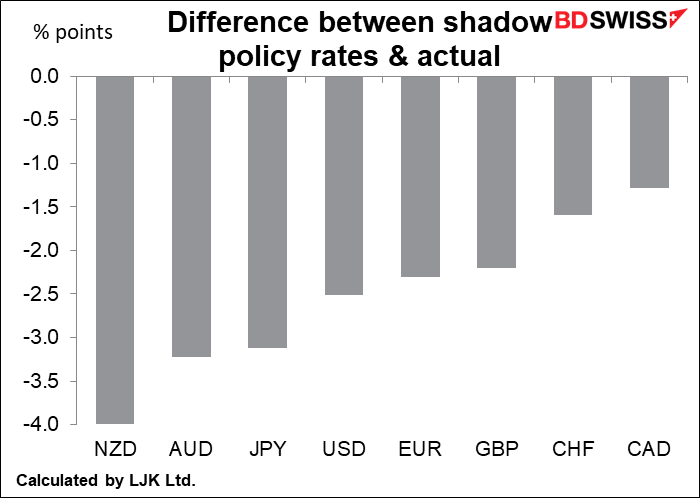 The Bank of Japan (BoJ) also met overnight. As expected, it left its policy tools unchanged. Like the Bank of Canada, the BoJ downgraded its view of the near-term economy but concluded that the government stimulus package announced last month will result in a stronger rebound in the fiscal year starting in April. They didn’t give any hints about what the results of their review of their policy framework, due at the next meeting in March, might be, although in his press conference BoJ Gov. Kuroda said the yield curve control framework has functioned appropriately and he doesn’t think there is a need to change it (which is what they said when they announced the review back in December). Their conundrum can be summed up by his comments that an excessive drop in super-long yields will weigh on the economy because they hurt the returns of pension funds and insurers, but at the same time it’s important to keep the entire yield curve low after the pandemic.

Separately, the Japanese government nominated Asahi Noguchi, a Senshu University economics professor with reflationist views, to replace Makoto Sakurai on the nine-member BoJ Policy Board. Sakurai was a loyal retainer of  Kuroda’s who never dissented from a BoJ decision (like most of them). Noguchi is said to be a fan of the BoJ’s yield curve control program and to believe in the power of coordination between monetary policy and fiscal policy, so it’s business as usual at the BoJ. 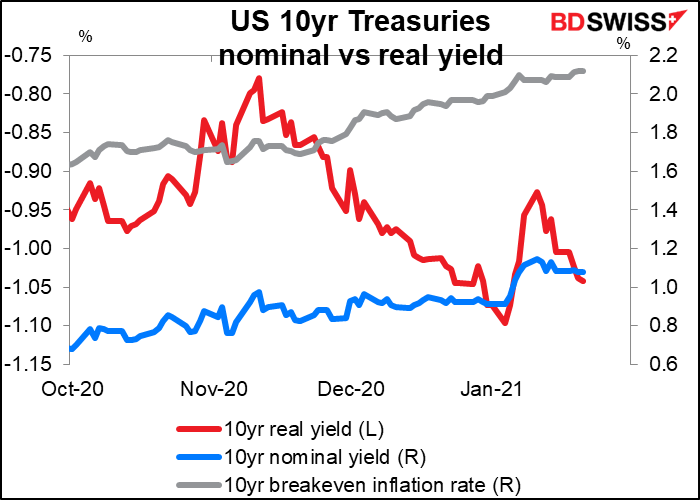 Asian stocks have continued to rise this morning.

The general “risk-on” mood boosted the commodity currencies and once again pushed the dollar down.

A busy day today with the European Central Bank (ECB) meeting and a number of important indicators.

I don’t expect any change in policy at the ECB meeting, and I doubt if anyone else does either. It’s only six weeks since they totally “recalibrated” their pandemic toolkit. It will take some time for those changes to permeate the economy. They won’t have any new forecasts reflecting those changes until March. Meanwhile, financial conditions are already accommodative. The ECB has been trying to shift the market’s focus away from bond yields to financial conditions as a measure of its success in providing liquidity to the economy. So unless there was some glaring reason why they should move – which there isn’t – I wouldn’t expect any changes. 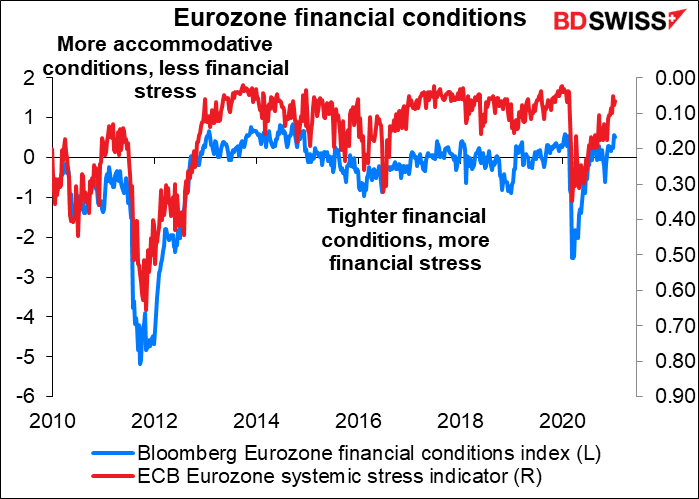 The main point of interest for me will be how much they stress the exchange rate in the press conference afterward. Last time, ECB President Lagarde said, “We will also continue to monitor developments in the exchange rate with regard to their possible implications for the medium-term inflation outlook.” The euro is little changed — actually a little weaker overall – compared to its value at the time of the December meeting. EUR/USD is about the same; it averaged 1.2104 the day of the December ECB meeting; now at the time of writing it’s 1.2130. However the euro’s trade-weighted average has fallen to 101.0023 from 101.67 in December (and 101.88 back in September, when ECB Chief Economist Lane first said that the ECB cares about the euro rate).

Accordingly at most I would expect to see the same comment as a sort of “boilerplate” statement. I wouldn’t be surprised though if they dropped it altogether. That might be a green light for EUR appreciation. 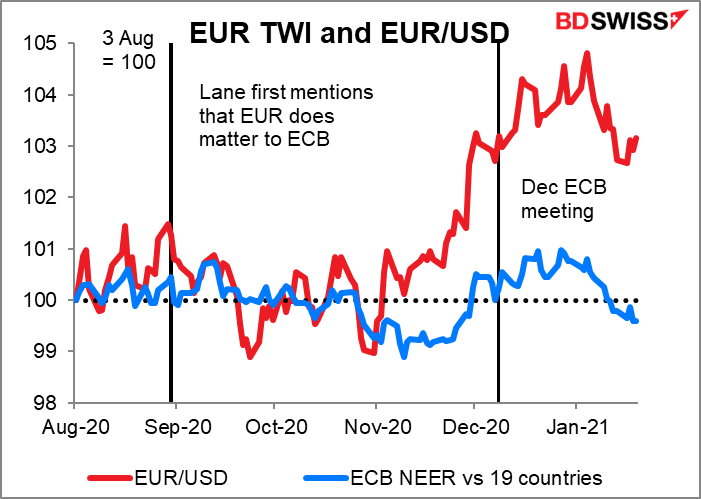 Otherwise, there isn’t much we can expect from this meeting. The overall message is likely to remain the same:  the pandemic continues to pose serious risks, accordingly the ECB will preserve favourable financing conditions over this extended period and stands ready to adjust all of our instruments, as appropriate, etc etc. The market will of course pay attention to any changes, for example if they think the balance of risks is changing for the better with the vaccine roll-out or for the worse as virus cases mount. But I wouldn’t expect any of these changes to be particularly significant for the euro unless they change their view drastically.

In that respect, it will be interesting to see how their view changes compared to the Bank of Canada and Bank of Japan. Several European countries have announced or are considering intensifying their lockdowns. That might cause the ECB to downgrade their near-term view significantly. At the same time, the vaccine roll-out isn’t going that great, so they might not be particularly optimistic about the future. Although if the recent ZEW survey is anything to go by, that’s not a worry – the analysts & pundits polled then were more optimistic about the future ( 61.8 vs 55.0) while their view of the current situation was unchanged (-66.4 vs -66.5). 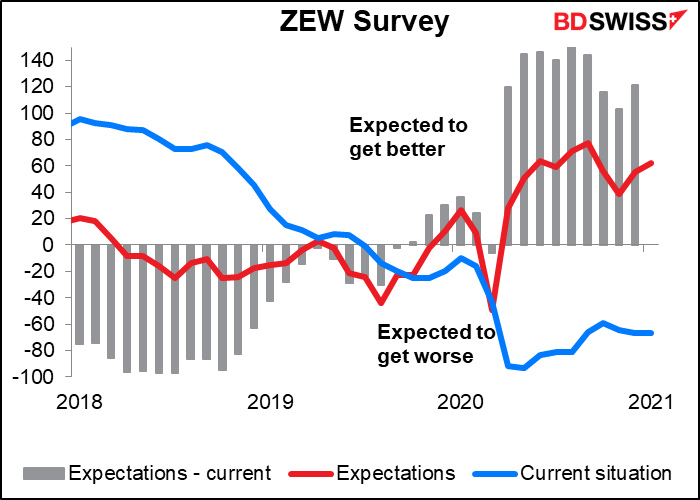 Looking at past performance of the euro on days when they haven’t changed policy, I would expect to see a pretty routine day without any extraordinary volatility. 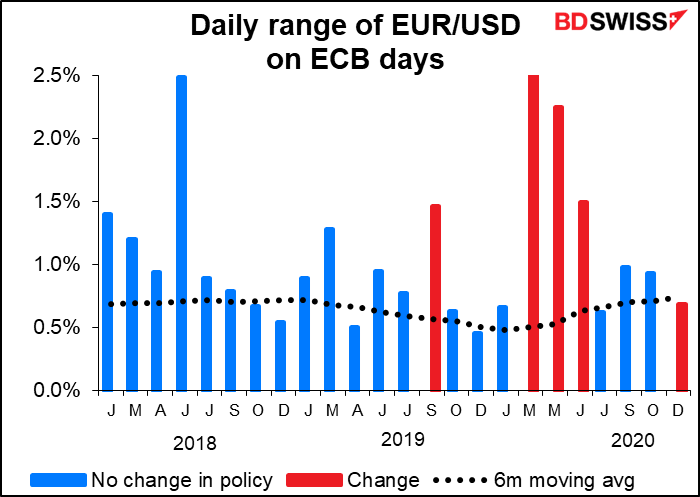 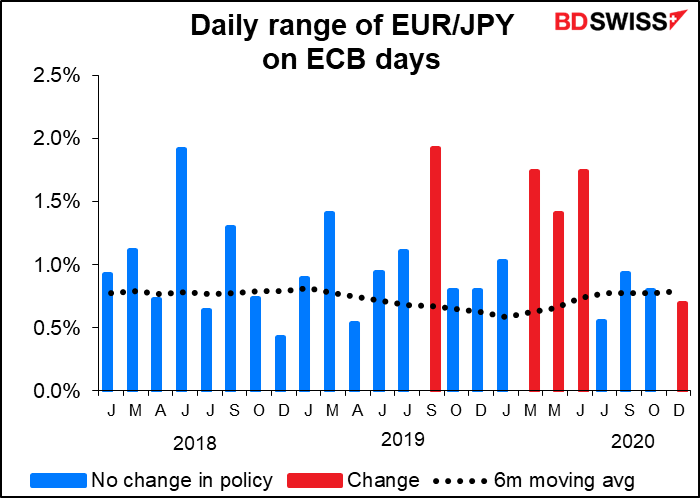 That’s it until the US opens for business and the dreaded US initial jobless claims are announced. Last week was a disaster: 965k vs 789k expected (previous revised down to 784k).  This was the largest increase since the initial surge back in March. This week economists are expecting some improvement (-30k) but who knows? 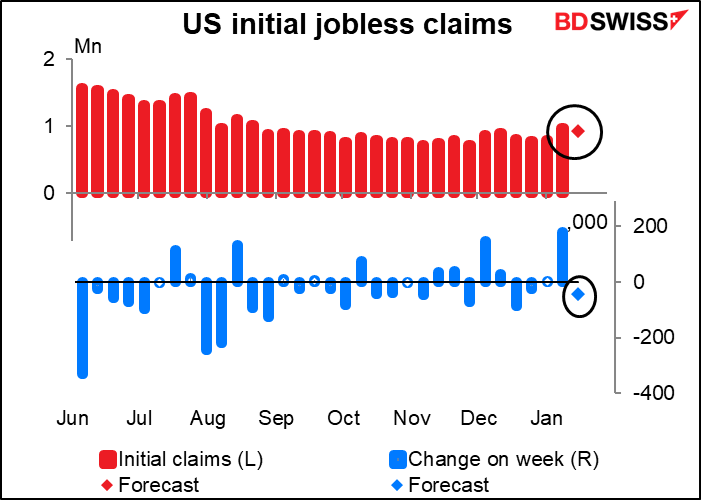 Continuing claims are expected to be up by 29k, following last week’s 199k increase, the largest increase since Nov. 27th. Earlier in the week they were expected to be down, so this is a change in the market’s view over the last few days. 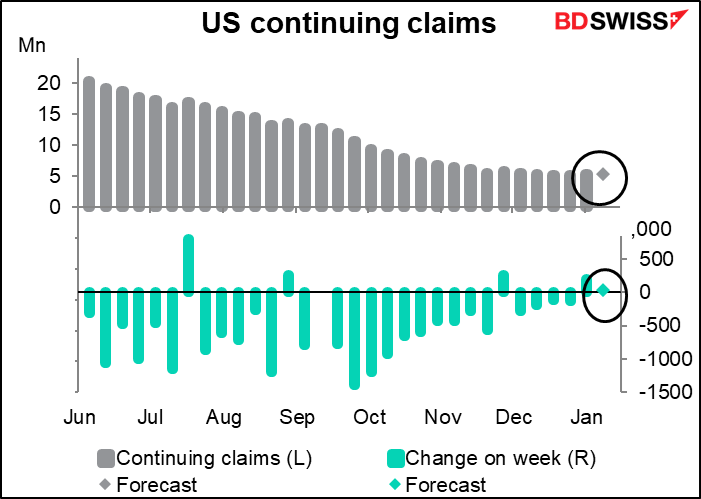 The Philadelphia Fed business outlook is expected to be up a bit, but the Empire State manufacturing survey was also expected to be up and on the contrary it fell (3.5 vs 4.9 previous, 6.0 expected). But as long as it’s still in positive territory it shouldn’t upset things very much. I don’t think people are reacting to small misses or beats in economic statistics any more, as conditions are so unpredictable. 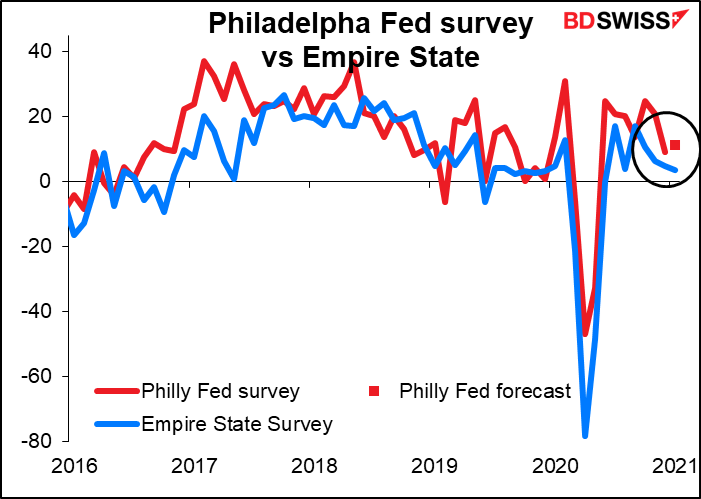 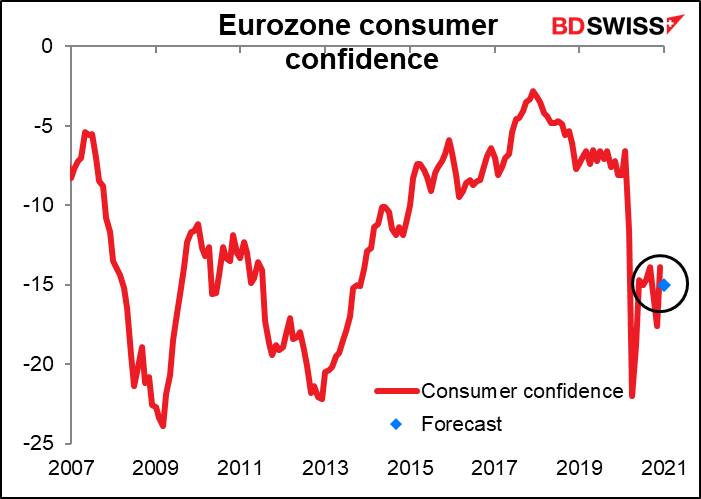 New Zealand’s consumer price index is expected to hit the bottom of the Reserve Bank of New Zealand’s (RBNZ) target range. I doubt if that will make any difference though because they’ve already got a super-loose monetary policy. Like most central banks’ they’re aiming more at supporting the economy than hitting any inflation target. Lower inflation does make for higher real yields though so in theory this could be good for NZD. 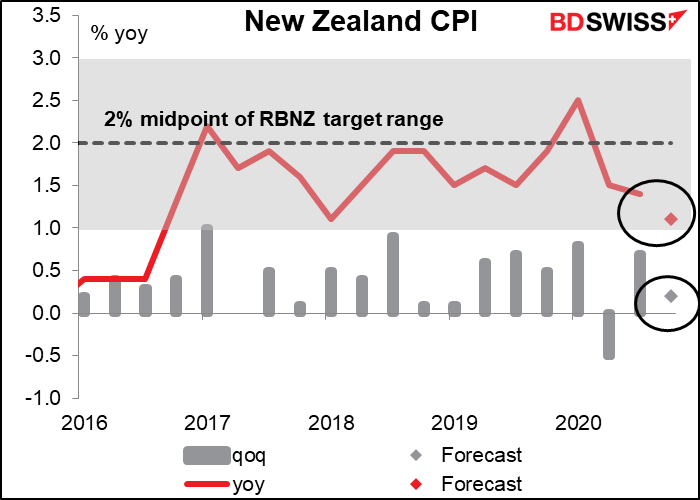 Same with Japan too – the country is expected to fall deeper into deflation. This won’t affect the Bank of Japan, which just met, but it will increase the real yield on Japanese Government bonds, which could cause JPY to strengthen. 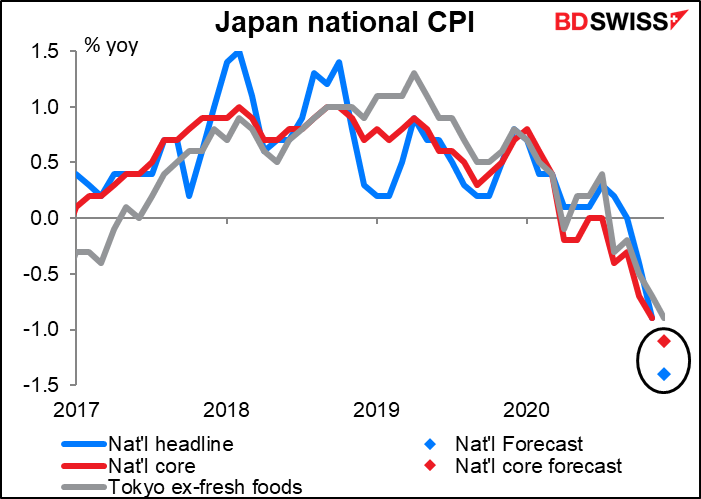 Australia retail sales are forecast to be down slightly, thanks to the virus outbreak from mid-December and subsequent tightening of restrictions. Also this year Black Fridayi and Cyber Monday both occurred in November, which is one reason why November sales were so strong. Some payback is likely.

Going forward, Australia has gotten the pandemic largely under control and restrictions are starting to be relaxed. That should be positive for the economy especially as the vaccine roll-out gets underway from February. 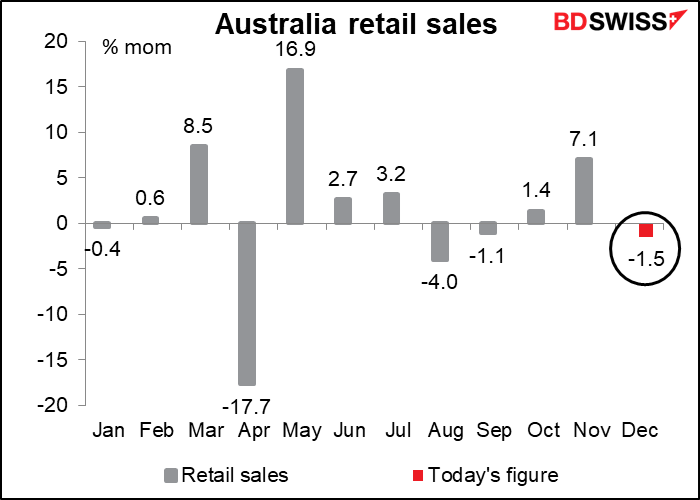 Then if you stay up a little longer, you can see UK retail sales, too. The market is expecting some bounce-back after the drop in November. 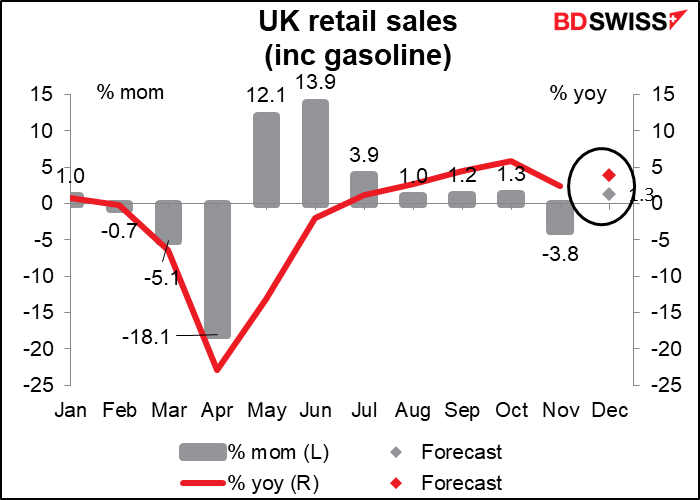 That would leave them up 3.6% from pre-pandemic levels, which is fairly healthy. 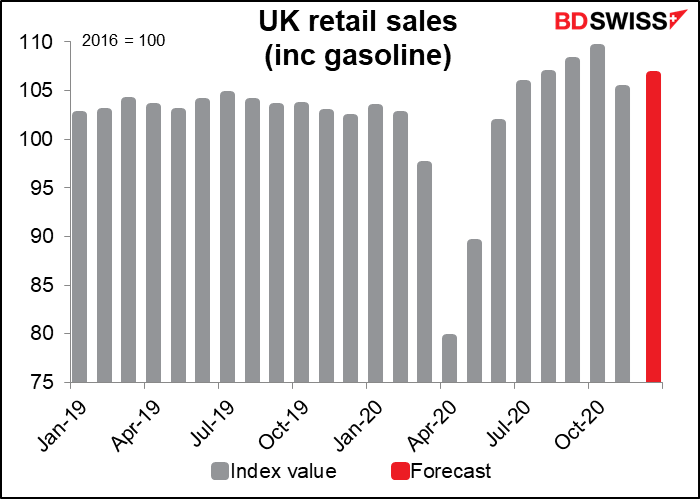 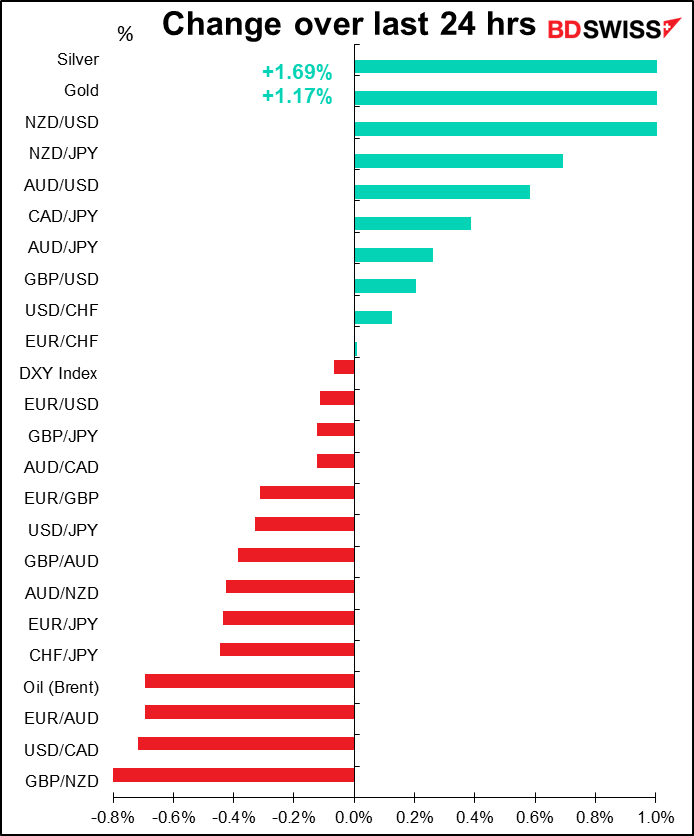