Commodity currencies Up, USD & JPY Down as risk sentiment Improves; US nonfarm Payrolls 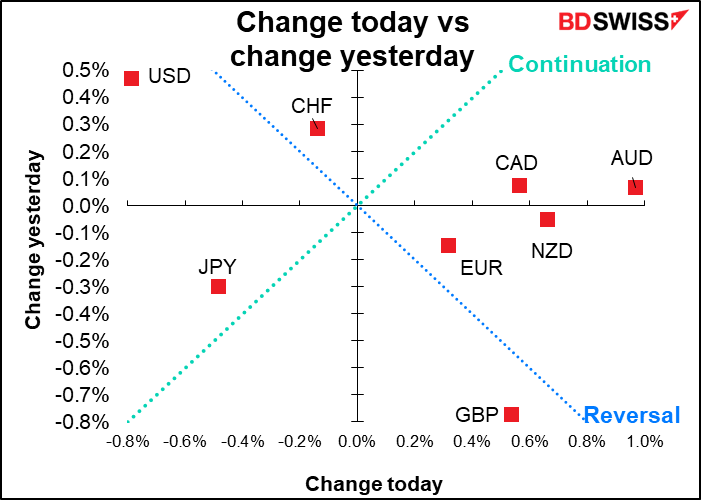 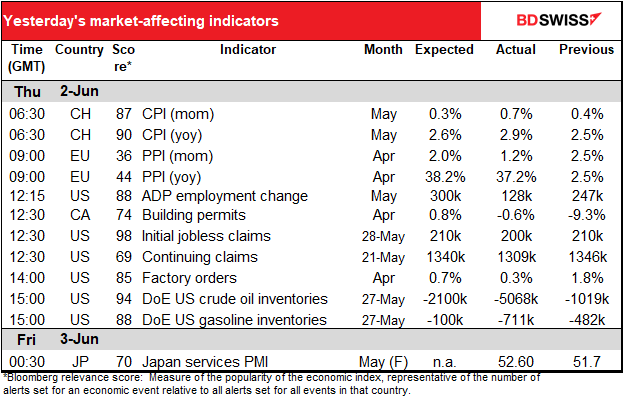 Lots of volatility in oil!

The graph below shows how oil prices were falling yesterday morning after the FT headline I showed — Saudi Arabia ready to pump more oil if Russian output sinks under ban – ran. Then the jump in prices around 12:00 GMT yesterday follows the end of the OPEC meeting, where the group agreed to increase production by 648k barrels a day (b/d) in July and August.

This is about 50%  more than what they had been expected to do ( 430k). Odd that increasing output by more than expected should send the price up, but people were worried that the FT headline might mean that other OPEC members would step in to fill the gap in the market created by Russia’s problems, which has removed about 1mn b/d from the market so far (and will likely get worse). Or even remove Russia from the OPEC quota system altogether. These moves probably would’ve resulted in an even greater increase in output so prices moved up.

In any case the agree-upon increase only amounts to a 0.4% increase in global oil supplies so it’s not going to shift the supply/demand curve significantly. And crucially, the additional oil will be allotted to OPEC members according to their quotas, which means that the actual increase in output is likely to be much less – most countries can’t increase output significantly regardless of what they’re allowed to produce.

US President Biden and other G7 officials had been asking – begging? – OPEC to increase production and so they welcomed the move. Saudi Arabia’s willingness to accommodate US demands sets the groundwork for President Biden to visit the Kingdom at the end of the month, according to a New  York Times report. Perhaps with some face-to-face negotiations he can convince the Saudis to break with Russia and increase production more substantially in September. That’s the question that the oil market will be focusing on from now.

The US data overnight was mixed. The ADP report missed expectations, but as I’ve noted again and again, there really is no connection between what the ADP reports initially and what the initial nonfarm payroll number is. At the same time (well, almost the same time) the weekly initial jobless claims came in lower than expected and continuing claims hit the lowest level since 1969 (when the US population was significantly lower) so it’s clear that the US employment situation isn’t deteriorating that rapidly, if at all.

It’s not entirely clear to me why risk sentiment improved so much. The S&P 500 was up 1.8% and NASDAQ 2.7%/ Most commodity prices rose too. (Note that “energy” is the only sector that’s down even though “petroleum” gained the most. That’s because the price of natural gas fell sharply.) Some reports credit optimism over the reopening of China, but that’s been underway for a few days now. 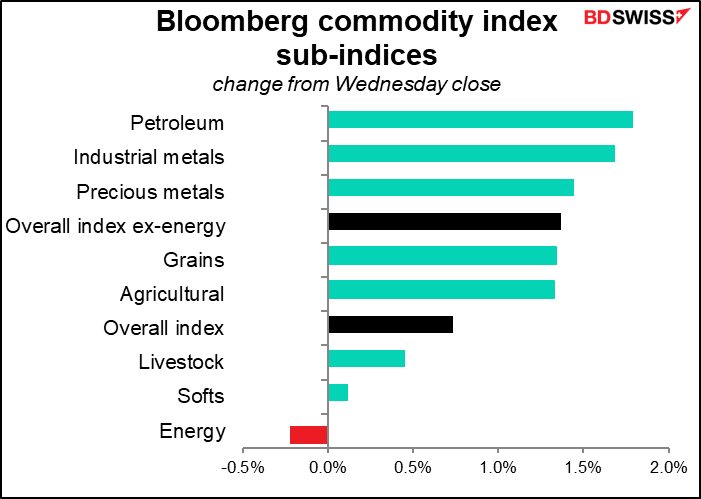 Furthermore, Fed Vice Chair Brainard (V) and Cleveland Fed President Mester (V) both made relatively hawkish comments. Their comments are probably the last we hear from any members of the Federal Open Market Committee (FOMC) before they enter their blackout period this weekend ahead of the June 15th FOMC meeting.

Gov. Brainard endorsed 50 bps hikes for June and July, as have most other Committee members we’ve heard from on the subject. The big question is, what do they do after that, in September? Given the current data outlook, Brainard  downplayed the chance of a pause and said it was more likely a decision between hiking 25bps or 50 bps at that meeting.

The comments had little impact on the market however. Fed fund futures actually rose a bit (i.e. discounted less tightening), nothing that great but taking out 2.5 bps of expected tightening this year

With a better “risk-on” sentiment and higher commodity prices, it’s natural that the commodity currencies should fall, while the “safe-haven” JPY and USD fell.

Now all eyes are on the nonfarm payrolls, and particularly the average earnings figure, as I discuss below. 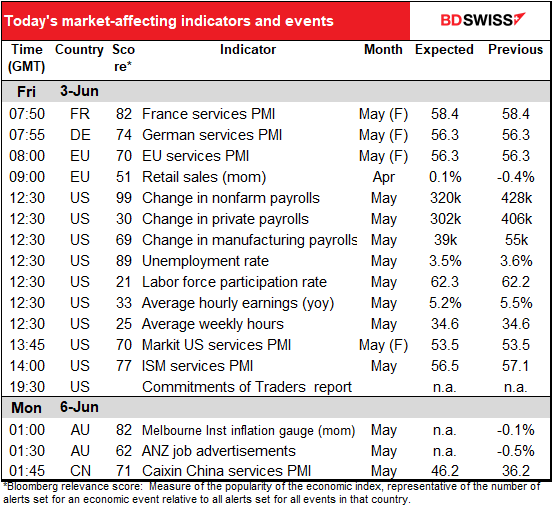 Today we get the service-sector PMIs, the final ones for those countries that have preliminary ones and the one-and-only for other countries.

If we look at the preliminary figures, they were mostly lower, especially in the UK and US. Only Japan saw an increase, probably because their service-sector PMI was already at such a low level. 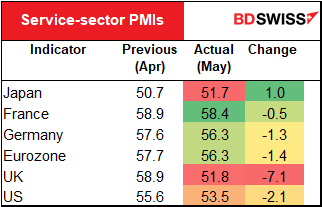 In the US they also get the Institute of Supply Management (ISM) non-manufacturing PMI. It’s forecast to be down 0.6 point, which would be better than the 2.1-point decline in the Markit service-sector PMI during the month. 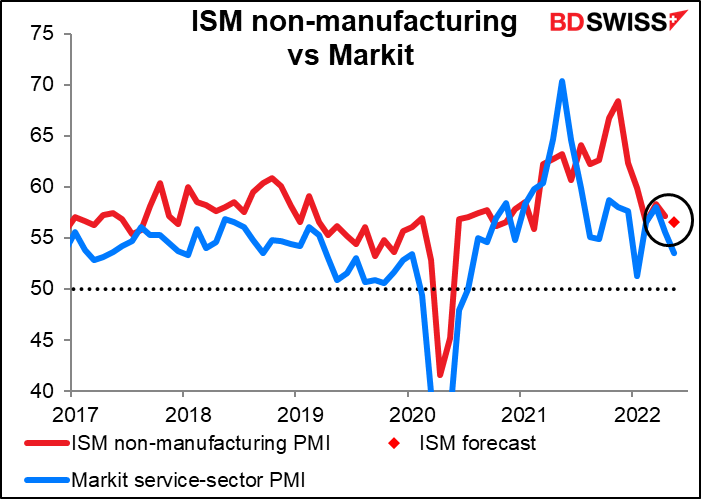 Eurozone retail sales are expected to be up a bit but nothing that major. 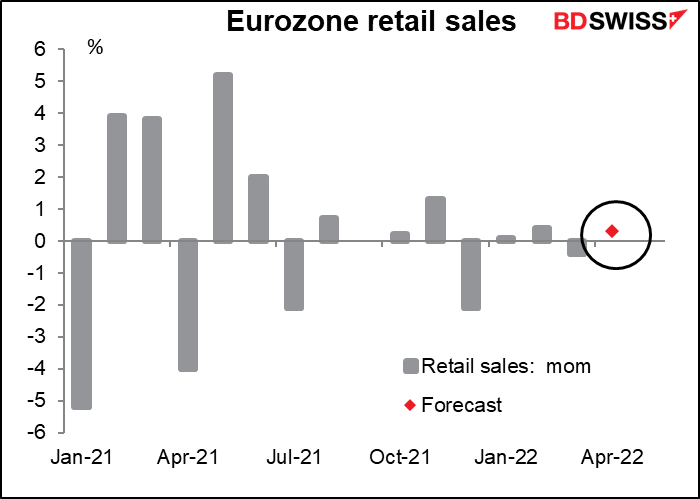 The big fluctuations we saw in the wake of the pandemic seem to be dying down as countries lift their restrictions and life in Europe returns to some semblance of normal. 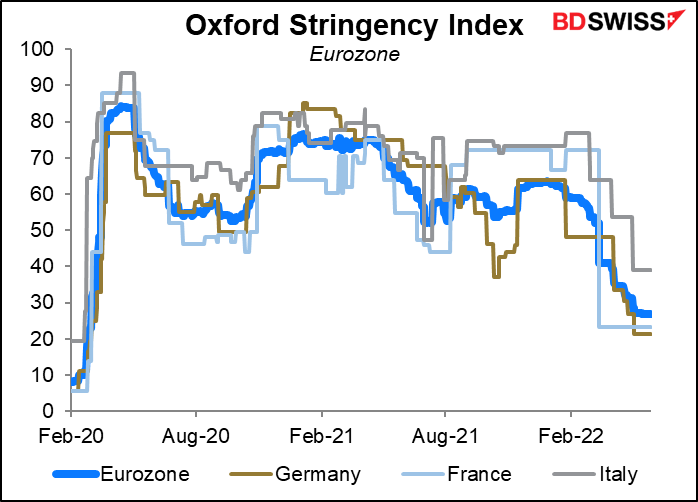 Eurozone retail sales have recovered to pre-pandemic levels, but there hasn’t been the same kind of surge that there was in the US. 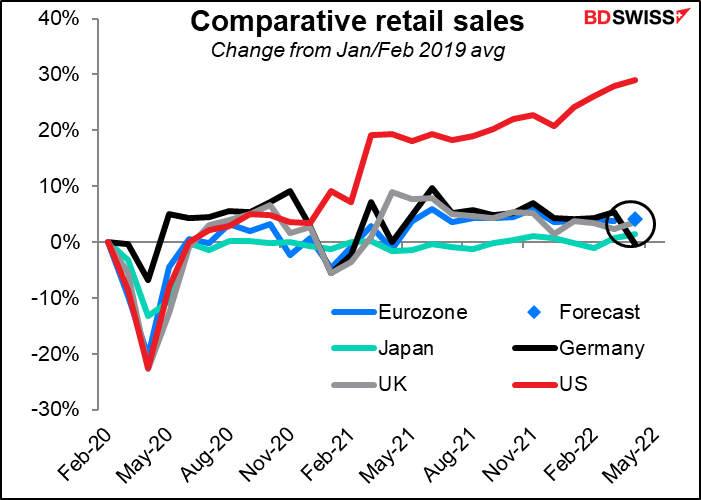 After that we wait for the seemingly all-important US nonfarm payrolls (NFP).  It’s expected to be up some 325k which, while below the 528k per month average over the previous year is still a good figure. The problem as we saw from Wednesday’s Job Offers and Labor Turnover Survey (JOLTS) is not that there aren’t enough jobs to go around but simply that the number of unemployed people interested in working (at current pay scales and conditions) is falling. 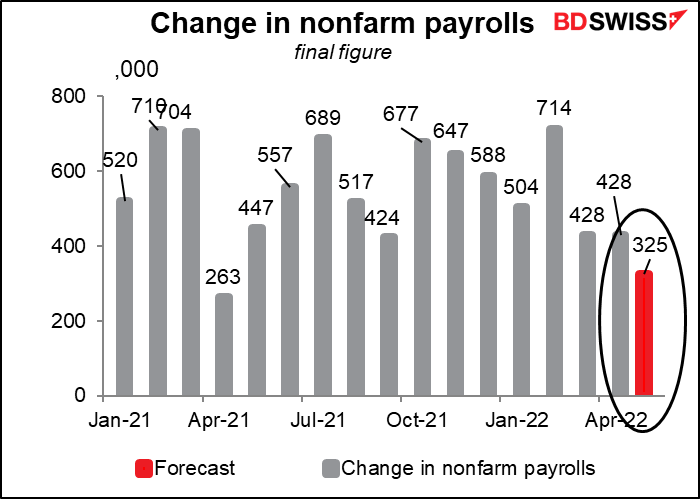 The unemployment rate is expected to tick down to 3.5%, equal to the lowest in 50 years. The participation rate is forecast to tick up a bit. 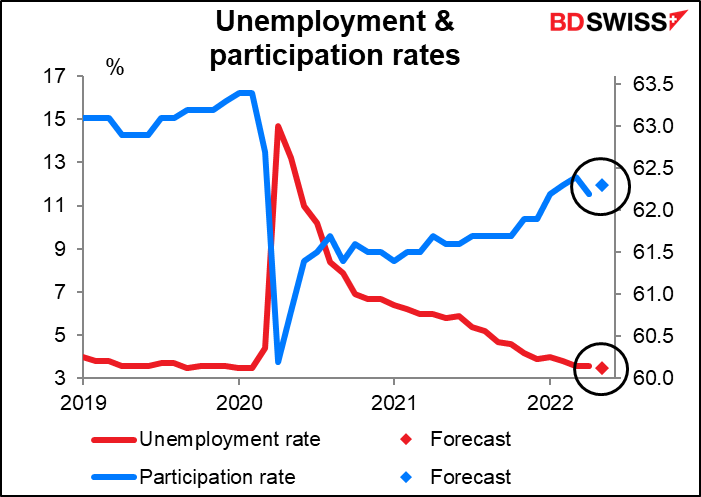 Average earnings growth is forecast to slow somewhat. That means less chance of a wage/price spiral, meaning less need for the Fed to hike aggressively, although we should note that in any case wages are not rising as fast as prices are in the US. 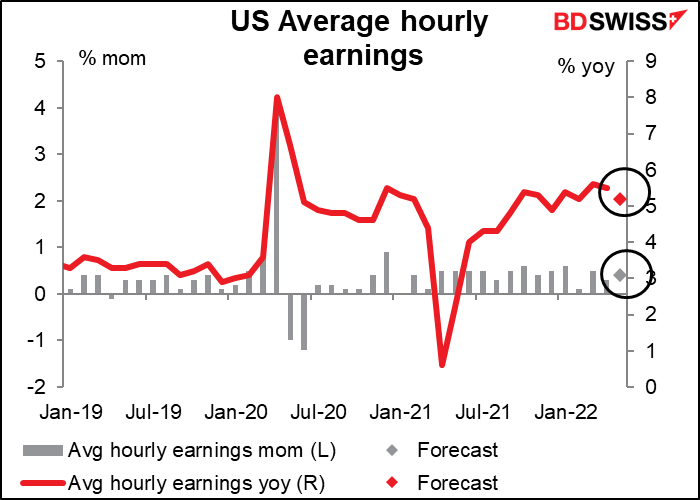 How likely are we to hit the forecasts? Looking just at the NFP figure itself, since Jan 2021 it’s missed 8 times and beat 8 times, so hard to tell. The last two months the market consensus has been pretty close, but of course past performance is no guarantee of future performance. 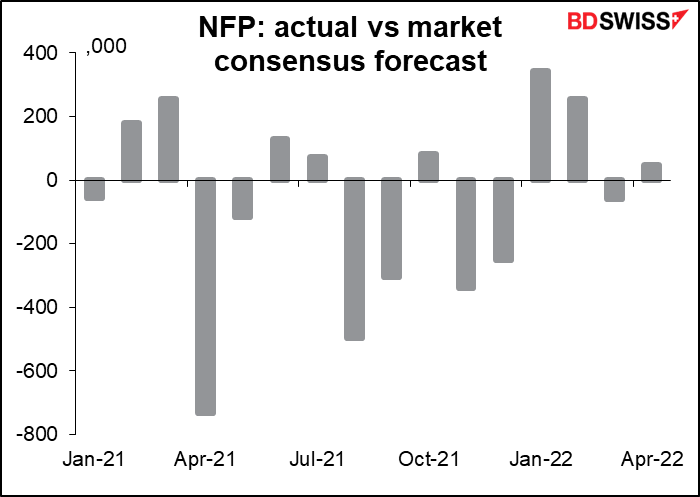 What happens to USD after the NFP comes out? 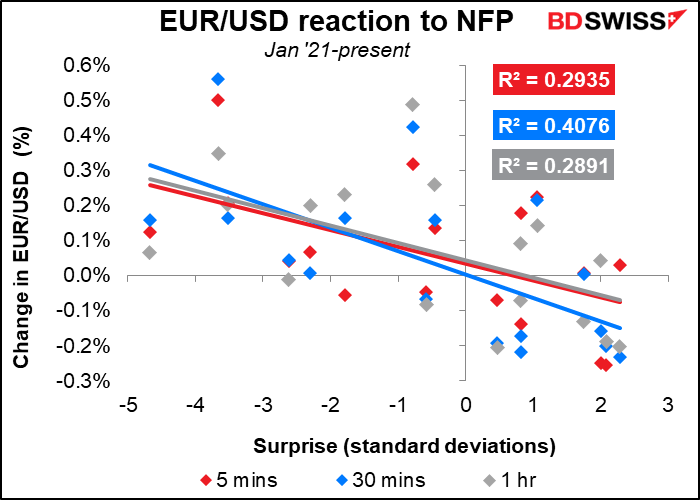 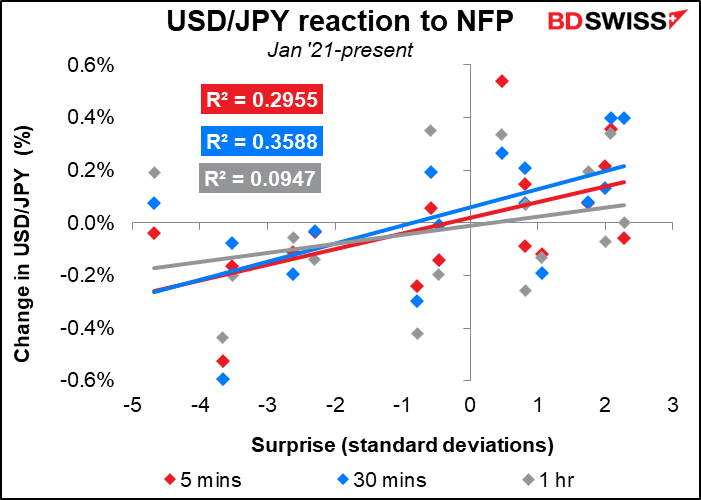 The impact of the other variables is much less important, although it does seem as if the impact of the average earnings figure grows over time. It’s possible that people react immediately to the headline figure, the increase (or otherwise) in payrolls, and then gradually consider the impact of other figures that come out at the same time. 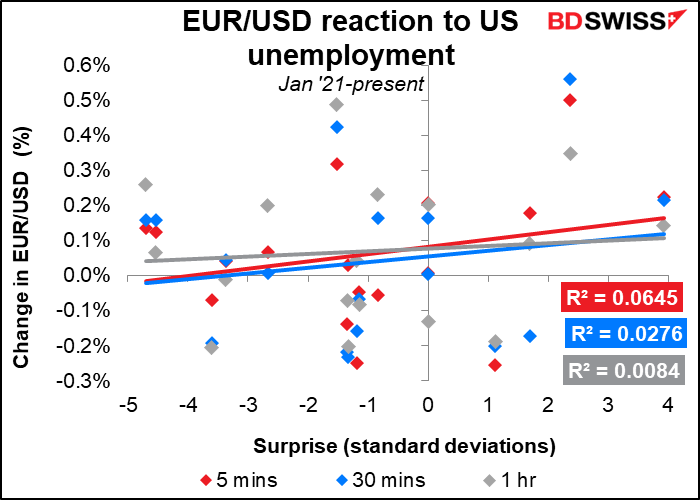 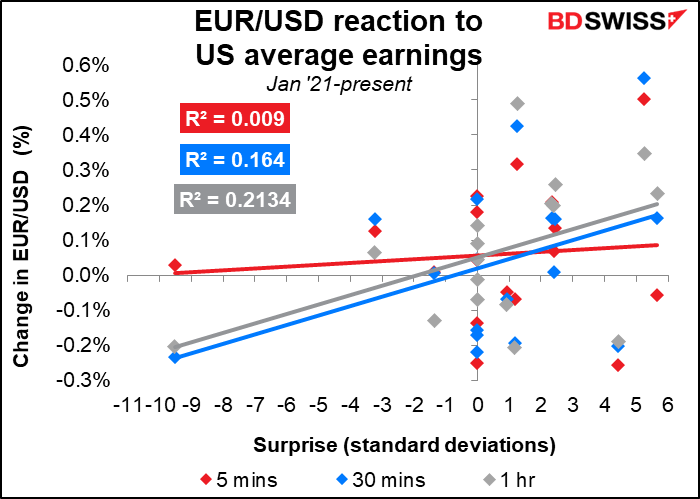 The reaction of the dollar over the next several days is also interesting. Oddly enough, the dollar has tended to strengthen in the days following the NFP figure regardless of whether the NFP missed or beat estimates. That’s probably because whether it missed or beat, the market still thought it was enough to get the Fed to move.

Now however the impact may be less because everyone knows that the US is virtually at full employment. The employment picture is therefore no longer a major factor that will determine whether or how much the Fed tightens. It’s now down to the inflation rate. Only if the unemployment rate were to rise to such a level as to impair the Fed’s target of “maximum employment” would people judge that the employment picture will have a significant impact on Fed thinking. 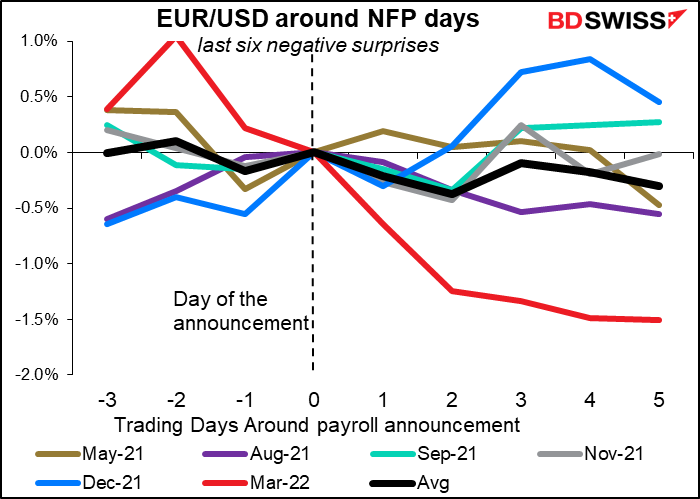 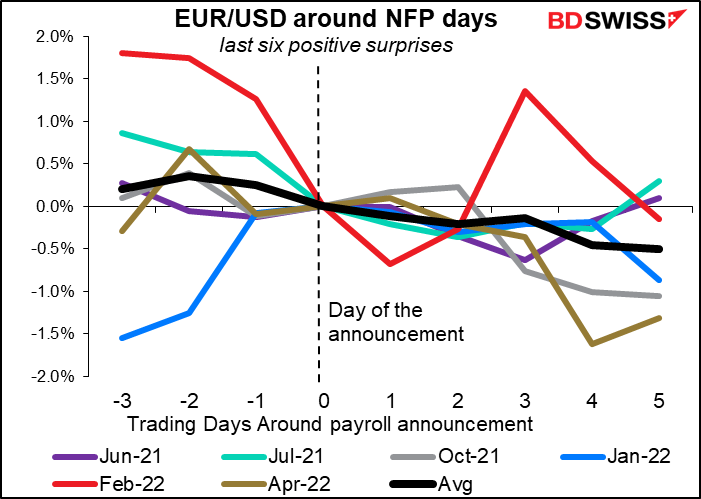 In that respect, the average earnings figure may start to be more important than the NFP. That’s because earnings are the main way that higher employment feeds through to higher prices. (Of course, more people working means higher total incomes which means higher total spending, so there’s that too. But companies don’t necessarily have to raise their prices in that case because more people working means more production, too.) 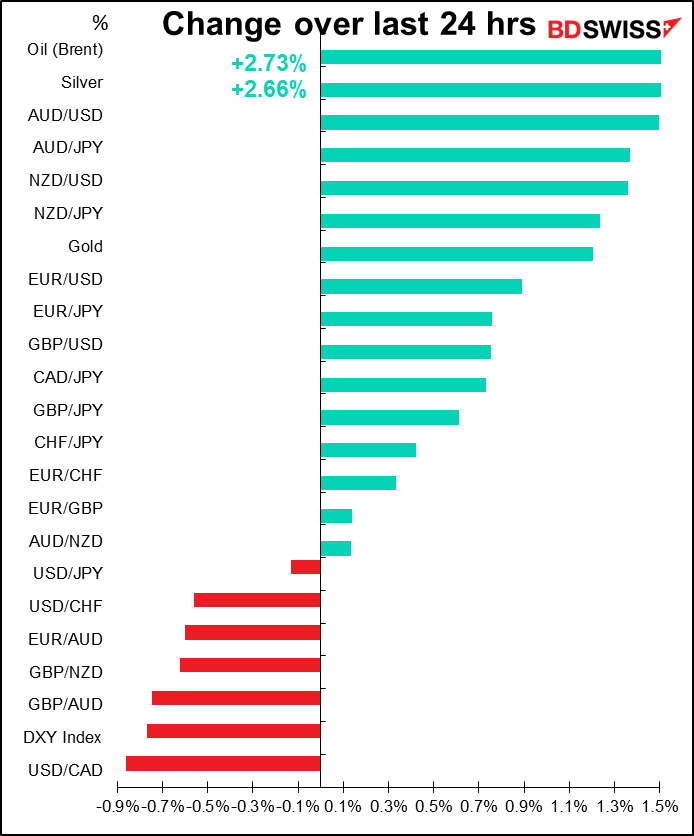