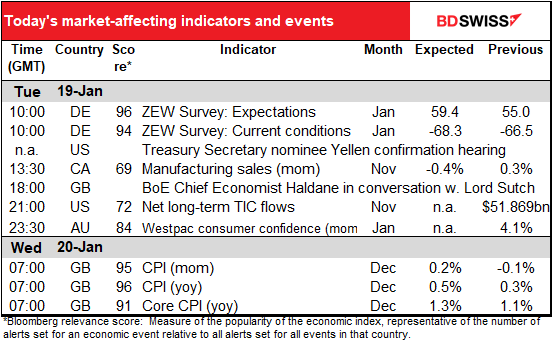 It was a “risk-on” mood this morning, with most Asian markets up today – some quite strong (eg South Korea’s KOSPI 2.6%, most other markets up 1% ). CAD was the best—performing currency today as the market walked back its plunge from Monday. The currency started the week sharply lower on lower oil prices and a report that President-elect Biden would cancel the Keystone XL pipleline bringing oil from Canada to the US on his first day in office, but a general “risk-on” mood and weaker dollar all around brought it back.

According to Bloomberg, the EU will unveil its plan to strengthen the international role of the euro (although I have to say I don’t see anything about that on the European Commission’s schedule). Bloomberg says the EU is trying to erode the dominance of the dollar and to insulate the bloc from financial risks, including US sanctions. The European Commission blueprint will reportedly outline how the region can fortify its economic and financial resilience by bolstering the single currency’s architecture and through growing markets like green finance.

The problem is that any measures to increase the international use of the euro will of course push up its value too by reducing financial inflows into the dollar and increasing inflows into the euro. This is the exact opposite of what the European Central Bank wants. (See today’s FT for example, which has an article Strong euro shows limits of ECB’s power in tackling deflation.) It’s the contradiction inherent in the complaints that many countries have about the global monetary system. On the one hand, they don’t like the political power that the US gets from having the global monetary system revolve around the dollar, but on the other hand they don’t want to take on the economic burden that the concomitant financial inflows would cause. So no one wants the dollar to remain central, but no one wants their currency to take over the role, either. They want to eat the US’ cake without having to pay the bill. It ain’t gonna happen. If they do succeed in diminishing the dollar’s central role, that would be a big positive for the euro – and a headache for the ECB. 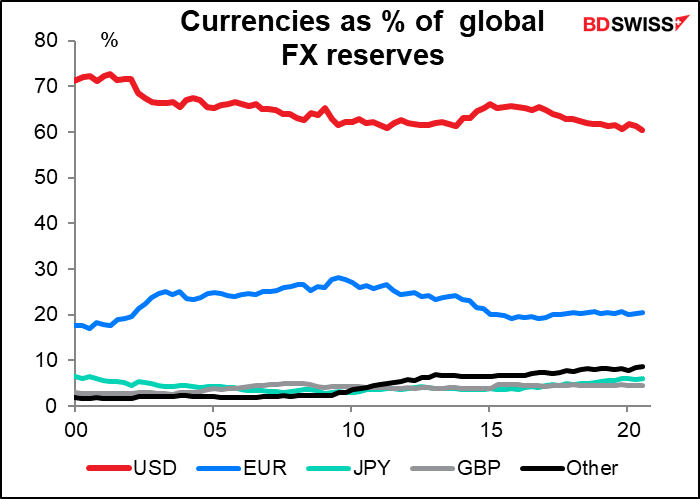 Also today, the Italian government of PM Conte faces a confidence vote in the Senate. As expected, they won a similar vote yesterday in the lower house of Parliament. Today’s vote will be more difficult however as the government doesn’t have a majority anymore. If Comte loses the vote, Italy would probably have to find a new prime minister who would have to put together a new coalition. Or maybe another “institutional government” led by a technocrat, such as the 2011-13 government under former EU Commissioner Monti. Or if neither is possible, then another election, although this is less likely as none of the parties want that. If Comte loses it’s probably negative for the euro, whereas if he wins it’s just business as usual and no major effect.

Elsewhere, the Senate Finance Committee will hold a confirmation hearing for former Fed Chair Janet Yellen, who’s being nominated for Treasury Secretary. (Sorry that I don’t know the time; Bloomberg doesn’t consider events like this important enough to put on their economic calendar.) She’s a labor economist by training and placed a lot of emphasis on the “full employment” aspect of the Fed’s dual mandate when she was at the Fed. She’s likely to emphasize the need to get employment back to where it was before the pandemic rather than worrying about inflation, a stance that would agree totally with the current thinking on the FOMC. That could be negative for the dollar. At the same time, she may also emphasize that the US doesn’t have a policy of weakening the dollar deliberately, which could be positive for the dollar – except that the idea that the market should set exchange rates also means no intervention if the market decides the dollar should be weaker. 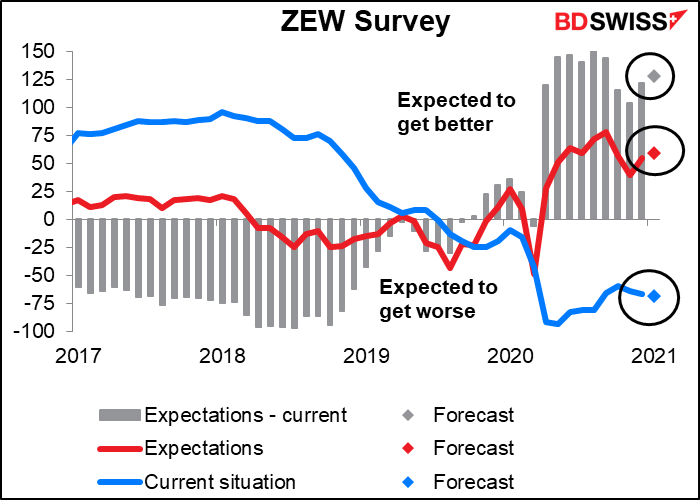 Canada’s manufacturing sales are expected to fall slightly, although there’s room for an upside surprise thanks to the decent performance of factory goods exports (except for auto exports, which have been weak). I don’t think ahead of tomorrow’s Bank of Canada meeting this will have a big impact either way. 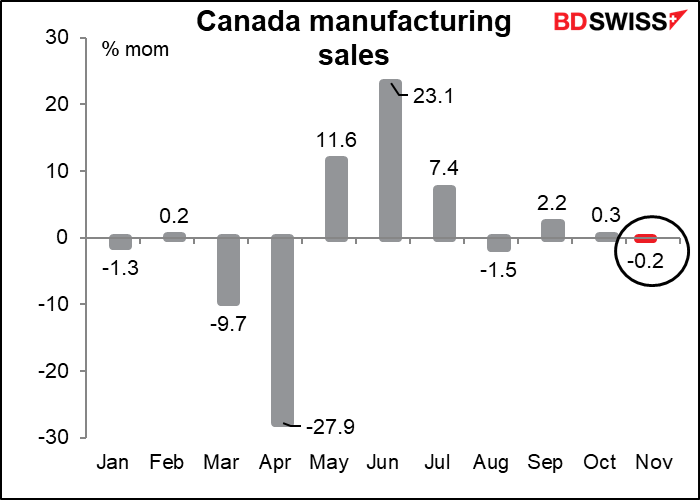 That’s about it until the evening European time, when the US Treasury International Capital (TIC) flow data are released. I don’t think these are market-affecting as there’s no forecast, but they are of profound interest to people like me, whose circumscribed and embittered lives leave them with no other amusements than pouring over spreadsheets trying to divine where the dollar is headed. The curious thing that the recent TIC data show is an inflow of long-term funds (black line) into the US but overall an outflow of funds (green line). What that means is that there’s been a large outflow of short-term funds, which was pushing the dollar down. I’ll be looking to see if that outflow continues. Short-term flows are notoriously volatile and can reverse easily. Moreover if US interest rates continue to rise, the inflow in long-term funds into the bond market may well increase. 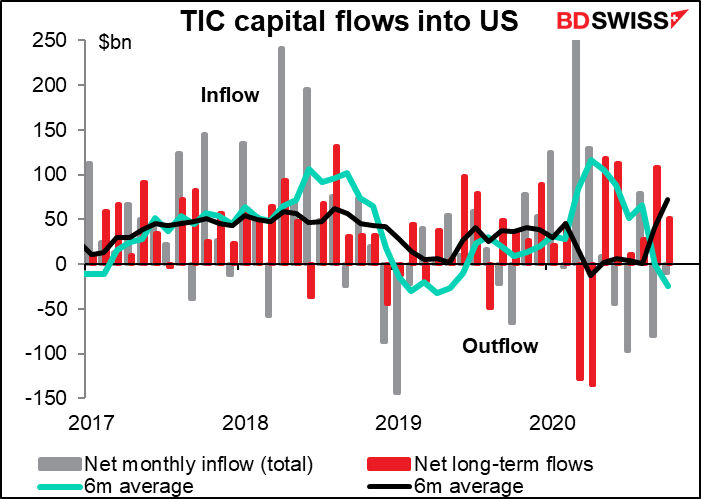 That’s the last indicator you have to watch today. You can relax and let sleep knit up the raveled sleeve of your positions until early tomorrow, when the UK consumer price index (CPI) is announced. It’s expected to show a modest increase in the annual rate of inflation at both the headline and core level. I doubt though if that will be enough to change the market’s outlook on UK interest rates, which are expected to hit zero by May and go negative by the end of the year. That depends more on the GDP figures (which were much better than expected for November, but wait until December and January) and how Brexit goes. Bank of England Chief Economist Haldane may have something to say on that topic today when he talks with Lord Alan Rusbridger, the former editor-in-chief of The Grauniad.

One big point of interest in these figures will be the early guidance from the Office of National Statistics (ONS) around what the weights will be for the basket of goods & services that they use in compiling the CPI this year and next. These are revised based on what people bought in the preceding year and of course last year’s consumption basket was wildly different than normal. That’s going to affect inflation data in many countries during 2021. 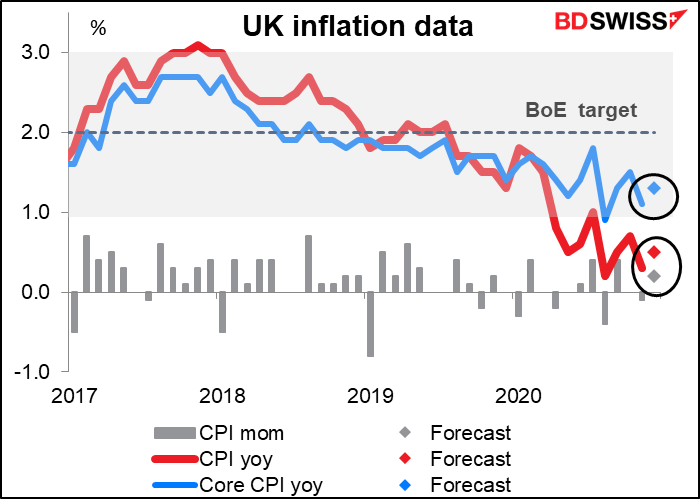 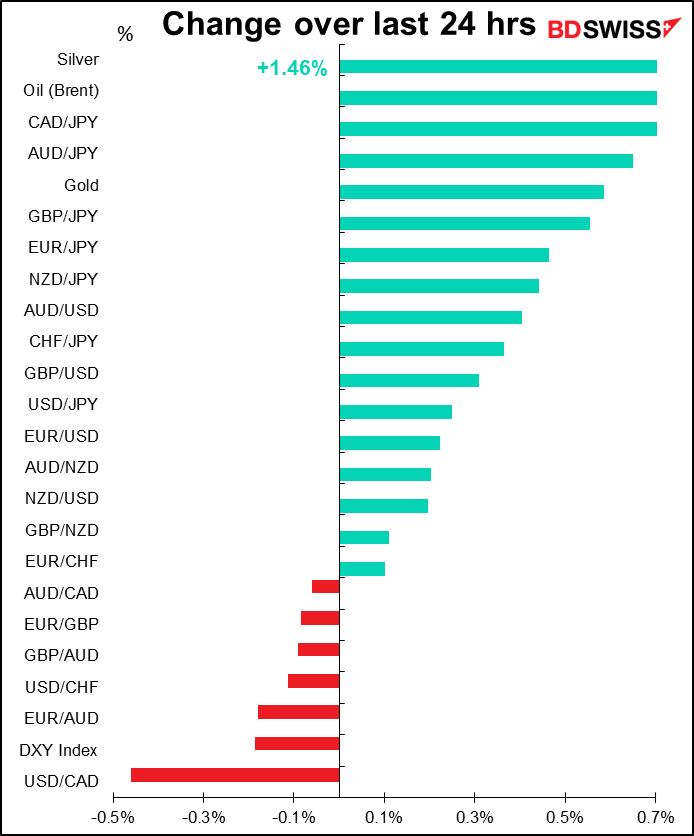