The total market value of cryptocurrencies surpassed $1 trillion for the first time Thursday amid a frenzied and volatile rally in Bitcoin to yet another record. Cryptocurrencies hit the milestone after a fivefold climb in market value in the past year, data from tracker CoinGecko shows. Strategists have cited demand from speculative retail traders, trend-following quant funds, the rich and even institutional investors as among the reasons for the surge. 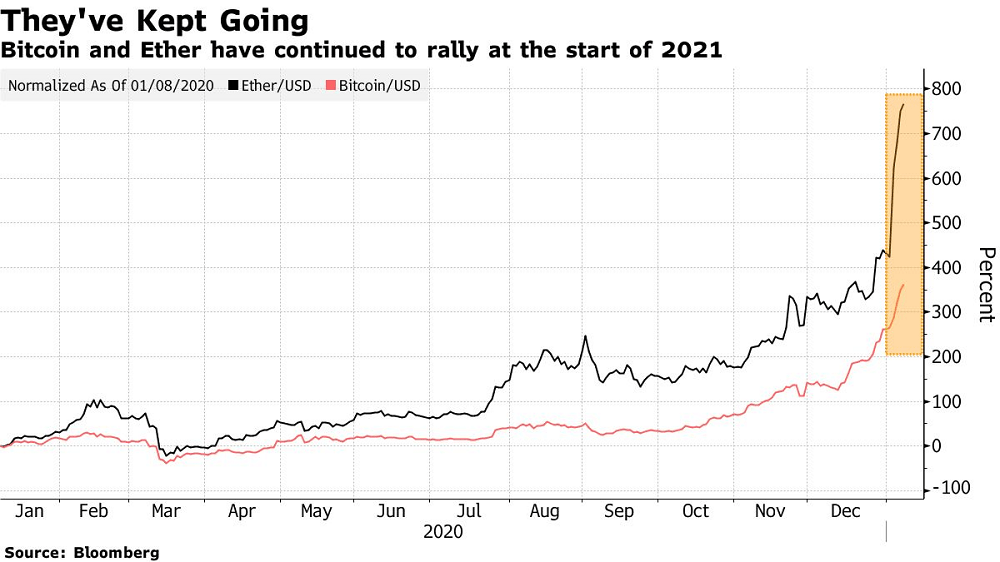 Bitcoin rose as much as 6% on Thursday to touch a high of $38,169 and has more than quadrupled in the past year, according to a composite of prices compiled by Bloomberg. It accounts for about two-thirds of cryptocurrency market value, followed by Ether at about 13%, according to CoinGecko data.

Digital coins are jumping in a world awash with fiscal and monetary stimulus, even as some commentators fear an inevitable bust and others question the basic integrity of crypto markets. Proponents of Bitcoin argue it offers a hedge against dollar weakness and the risk of faster inflation, a bit like gold, while critics decry the intellectual soundness of comparing the two assets.

“The more that people perceive that their assets, particularly their liquid assets such as fiat currencies are eroding in value, the more they will look for alternatives,” said Geoffrey Morphy, president of Canadian crypto mining company Bitfarms Ltd.

Active Bitcoin accounts are nearing their all-time high levels of late 2017, according to researcher Flipside Crypto — possibly a sign that some holders are planning to sell. Fewer than 2% of accounts hold 95% of Bitcoin supply, so a few big trades can impact prices. The last big Bitcoin boom began imploding in late 2017.