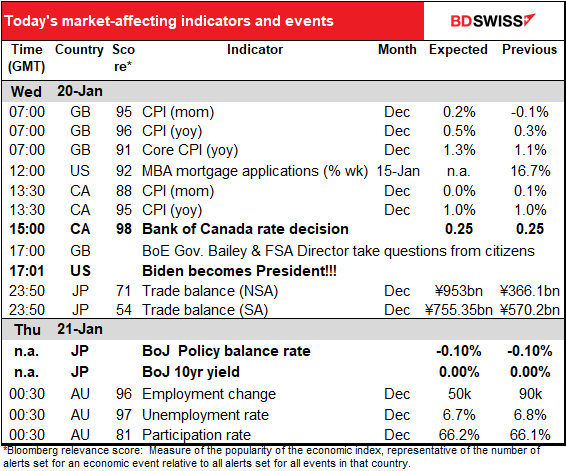 We have two central bank meetings and a number of important statistics, but I’m only interested in one thing today:  President Biden’s inauguration. There are several questions about this:

Trump’s legal troubles don’t have immediate anything to do with the FX market — I just get a kick out of writing about them. But longer-term they do matter insofar as they may affect the course of the Republican Party: whether it continues in its current radical direction or returns to being a conservative party. It will be worth noting whether a) he’s convicted in the Senate and subsequently made ineligible to hold office again, and b) which other members of his family are charged, if any. Even if he’s ineligible to run again, they could in theory be the standard-bearers for another round of the Trump Dynasty in 2024. Heaven help us all!

Little movement in the major currencies over the last 24 hours. The euro dodged a bullet when Italian PM Conte won a vote in the Senate by a narrow 156-140 margin, allowing him to soldier on with a diminished coalition. It got only a modest boost from the European Commissions’ proposal to promote “a stronger international role of the euro by reaching out to third-country partners to promote its use, supporting the development of euro‑denominated instruments and benchmarks and fostering its status as an international reference currency…”

I think this idea is great in theory, but if it ever got traction in practice, the EU would quickly find that the “extraordinary privilege” of being the major reserve currency is on the contrary an “extraordinary burden” that no other country is willing to bear. The EU would probably decide, like China has, that although it might not like the US getting the benefits of being the central currency, it doesn’t want to pay the price that the US pays, namely a consistent financial account surplus, which of necessity means a current account deficit and loss of jobs that that entails. 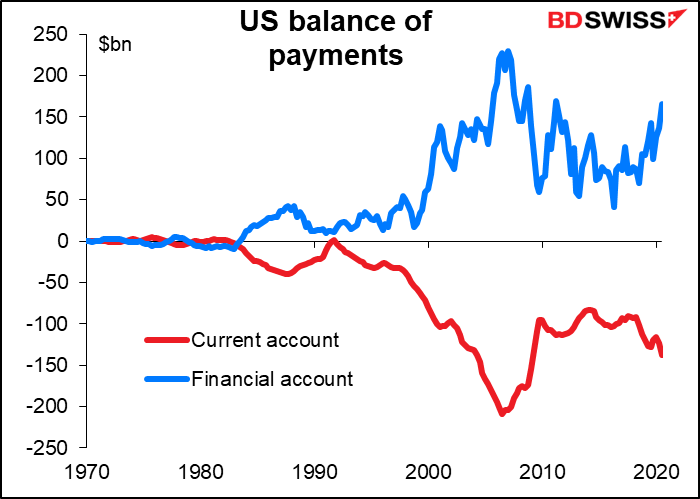 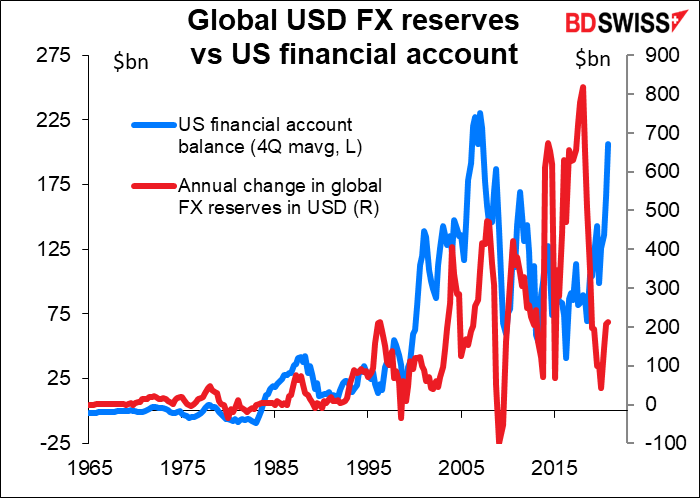 US stocks closed higher  as Treasury Secretary nominee Yellen argued that low interest rates offered scope to boost stimulus for the US economy. Growth and cyclical stocks led the way at the expense of defensives such as consumer staples and real estate. Energy stocks were stronger as oil prices rose. Semiconductors and media stocks were the other outperformers. Bank stocks were flat as Bank of America’s Q4 sales and trading revenue missed estimates and as Goldman Sachs shares fell despite record profits. 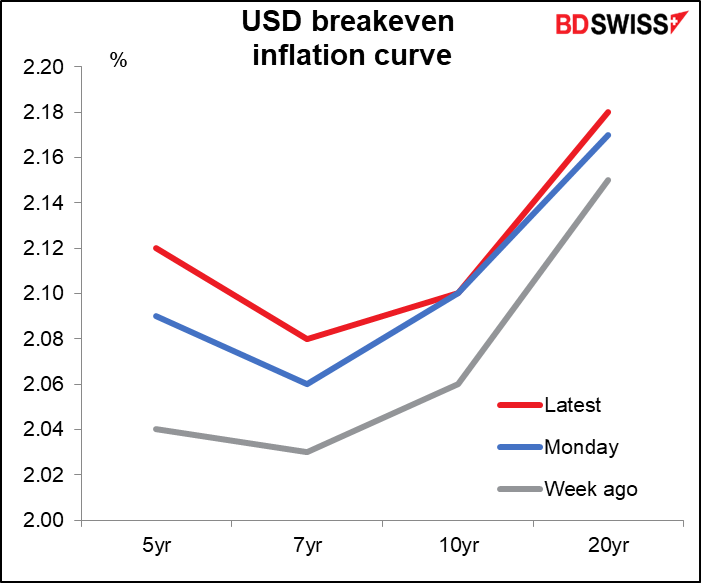 In the general “risk-on” mood USD and JPY were generally lower (although JPY’s trade-weighted average moved up because it wasn’t as weak as USD).

I’m not sure what happened with NZD. It plunged during European trading yesterday and although it’s been recovering since with the help of higher milk prices at the biweekly auction, it’s still lower on the day. It looks like it was just one big trade outside of home market hours that sent it down.

There are two central bank meetings today, the Bank of Canada (BoC) this afternoon and the Bank of Japan (BoJ) overnight. I don’t expect either to make any changes in their policy or their forward guidance.

The most we’re going to get, IMHO, is an updated set of forecasts for both. The BoC’s Monetary Policy Report is likely to downgrade the 1H forecasts as the virus has worsened notably, but upgrade the 2H forecasts since the roll-out of a vaccine is happening about a year earlier than they anticipated back in October.

As for the BoJ, its Outlook for Economic Activity and Prices is also likely to downgrade the near-term economic outlook in light of the recent declaration of a state of emergency, but I don’t expect any change in policy, for two reasons. First off, there’s still a lot of uncertainty about the length and geographic coverage of the emergency. Secondly, at their December meeting they said they would “conduct an assessment for further effective and sustainable monetary easing… The Bank will assess various measures conducted under [the current monetary]framework and make public its findings, likely at the March 2021 Monetary Policy Meeting.” So there may well be changes announced in March – Reuters reported that they may loosen their grip on the stock and bond markets by a) scaling back their purchases of Exchange Traded Funds (ETFs) and b) allowing super-long interest rates to rise more. But that’s the March meeting, not the January meeting.

As you can see, USD/CAD used to be more active than usual on BoC days, but last year it was only particularly volatile when they moved rates. I would expect it to be similarly normal today. 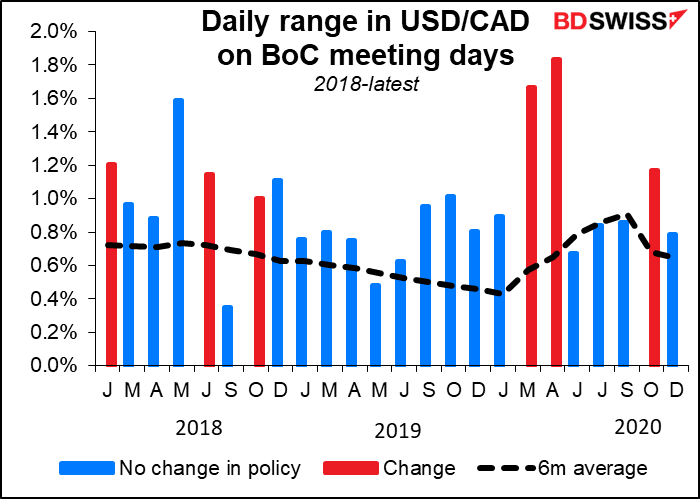 For those CAD traders who are more interested in the Bank of Canada rate decision, I’ve written a separate piece explaining my thinking about the meeting in more detail. Please cast a butcher’s at that by clicking on the link.

As for the BoJ, it’s even worse – generally they have below-average volatility on BoJ days. I don’t bother color-coding these days because the BoJ hasn’t changed its policy significantly in years. 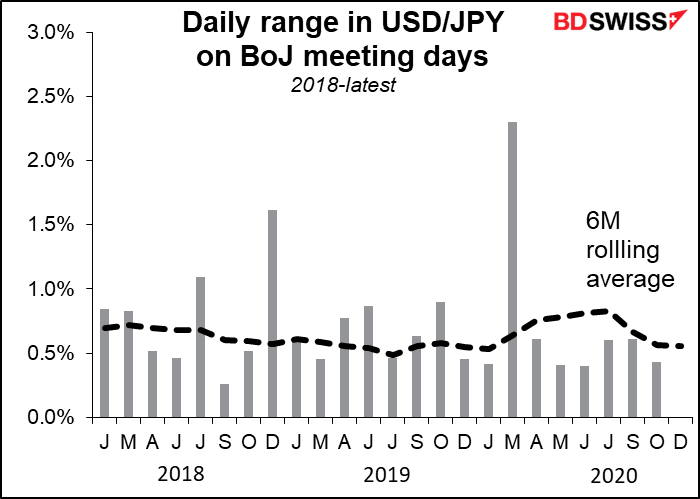 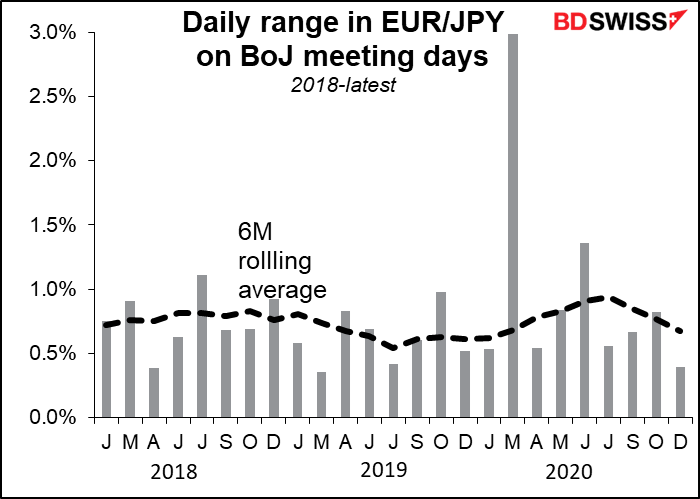 We already discussed UK consumer price index (CPI) yesterday. It turns out it was slightly higher than expected, but I pity the fool who thinks that will make the Bank of England tighten policy any time soon. I think right now pallets are more important than prices for Bank policy.

Mortgage Bankers’ Association mortgage applications don’t have enough data for the year to make a decent graph yet.

Canada is one of the few countries in the industrial world that’s hitting its inflation target. The headline CPI is forecast to remain right at the bottom of the 1%-3% target range on a yoy basis, but in fact the Bank of Canada uses three core CPI measures to gauge inflation, not necessarily the headline number, and those three are expected to remain on average at 1.7% yoy, where they’ve been for the last nine months (if we include two months at 1.6%). So inflation in Canada is fairly steady at around the Bank of Canada’s target level. Does it matter? No, not at all. The Bank of Canada in fact had carried out the largest quantitative easing program of any of the major central banks since the pandemic hit. It’s clearly worried about other things besides inflation, e.g. the collapse of the economy etc. So when the BoC issues its statement in 1 ½ hours, I wouldn’t expect optimism about hitting its inflation target to play a large role in its decision. 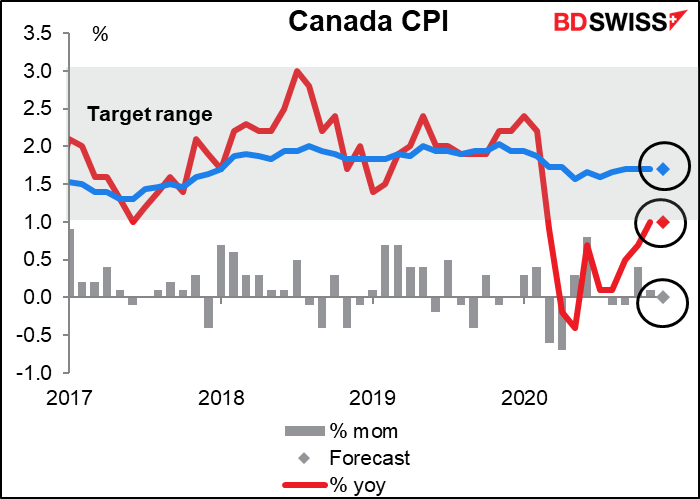 Then there’s the Bank of Canada meeting, but we already covered that upstairs.

That’s it until the sun rises over the Land of the Rising Sun and Japan announces its trade figures. They’re forecast to show a rising trade surplus. 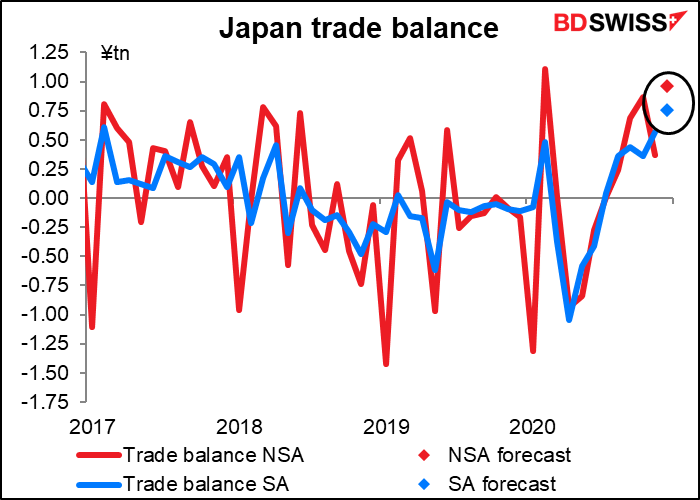 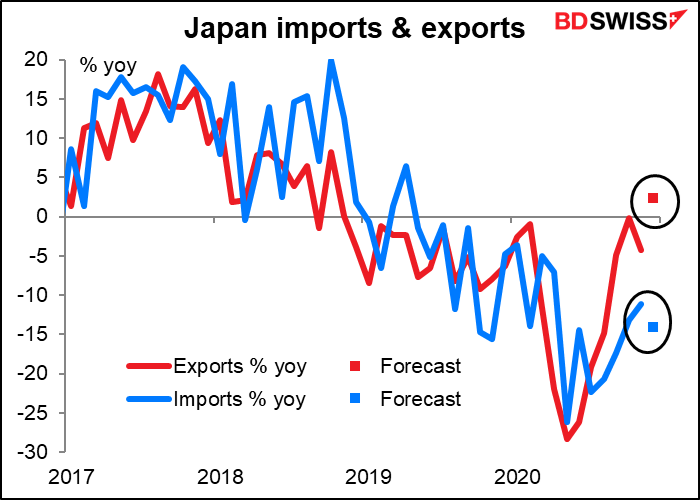 We only have global data up to October but the global manufacturing purchasing managers’ index (PMI) suggests that global trade has continued to recover since then. 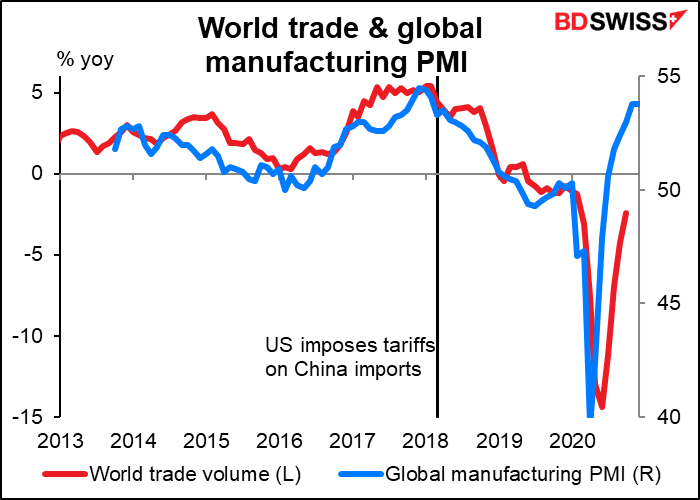 Australia announces its employment data. I think the employment data is more important nowadays than inflation for many central banks, especially the Reserve Bank of Australia (RBA). Although it doesn’t have a dual mandate like the Fed or Reserve Bank of New Zealand to, it behaves as if it does. The Board said at its last meeting that it “views addressing the high rate of unemployment as an important national priority.” It didn’t say that about inflation.

Fortunately the labor market in Australia is in relatively good health, at least relative to the disasters in other countries, that is. Private job vacancies are now back above pre-pandemic levels. Strong demand for labor is expected to underpin a gain in jobs this month and a further fall in the unemployment rate to 6.7%, even though the participation rate is near its record high. That would leave the Q4 average unemployment rate more than a full percentage point lower than forecast in the RBA’s November Statement on Monetary Policy. 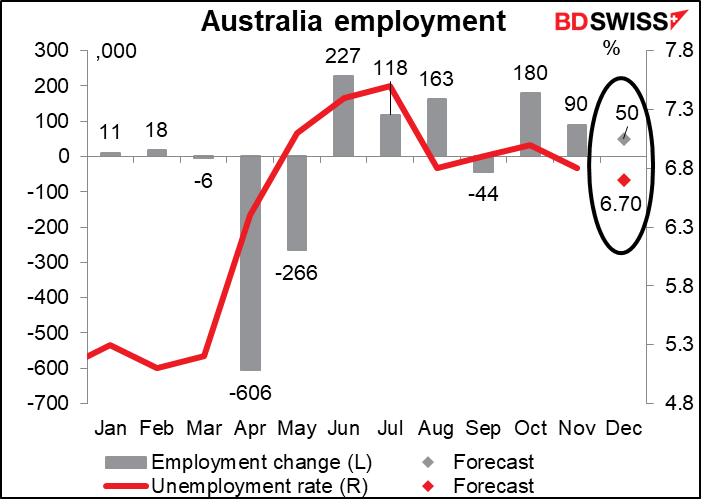 The question is, will this strong labor market encourage the RBA to start tapering down its AUD 100bn quantitative easing program when it expires in April? I don’t think so. An unemployment rate of 6.7% is still well above the 2010-2019 average of 5.5%, not to mention the RBA’s assumed measure of full employment of 4 ¾%. Unless there’s runaway inflation for some bizarre reason, I can’t see them even “thinking about thinking about” tapering their bond-buying until unemployment reaches 5.5%. But at least a further fall in the unemployment rate will it less likely that they cut rates at their Feb. 2 meeting. In that respect it may be positive for AUD. 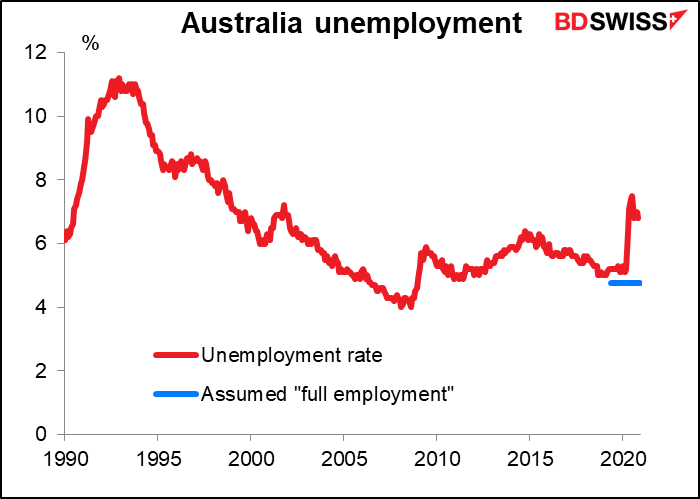 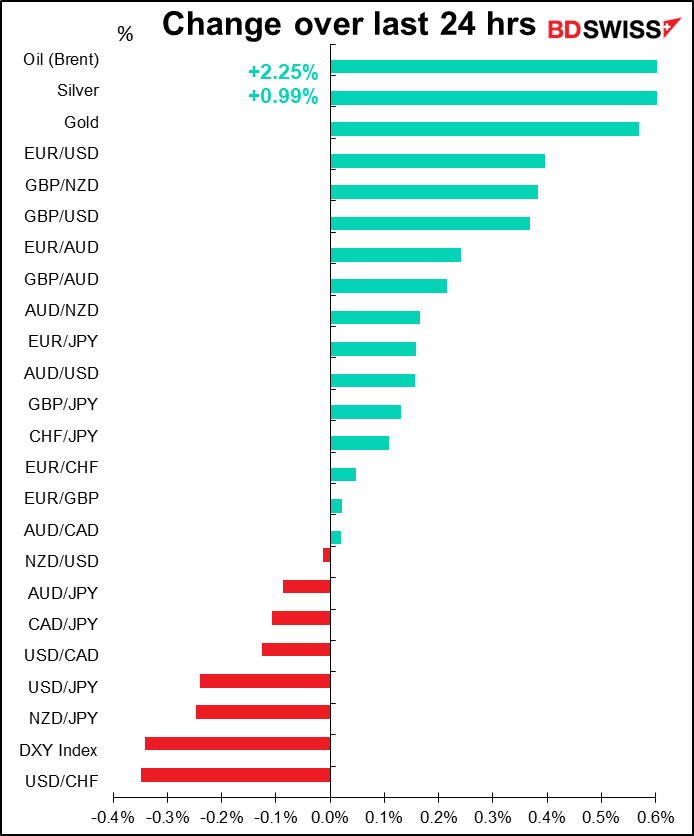