USD Soars, Everything else (almost) Plunges as US Rates Jump

It wasn’t what Fed Chair Powell said, it was what he didn’t say that roiled the markets. He acknowledged that the recent spike in yields “was notable and caught (his) attention,” but in response he just reaffirmed the Fed’s longstanding commitment to an extended period of accommodative policy, the duration of which will be dictated by progress on employment and broader financial conditions. Nothing new here.

What was important was what was absent from his speech. He didn’t push back against the recent volatility in the bond market, he didn’t hint at instituting “yield curve control” to contain the rise in yields or a possible “twist” in their bond purchases to dampen the rise in yields at the long end. In other words, surrender to the market.

Nor did he say anything about the esoteric but important issue of the bank supplementary leverage ratio, or SLR. The SLR requires banks to hold capital against Treasury bonds that they own as well as against deposits that they keep at the Fed. It’s currently suspended, but that suspension is set to expire on March 31st. If it does expire – if the Fed doesn’t extend the waiver – banks will have to hold more capital. That could cut bank demand for government debt and reduce the amount of money available for other investors to buy bonds. Market volatility would probably rise along with yields, which is why the Fed waived the requirement in the first place when the pandemic hit last March.

Meanwhile, the enormous US repo market – the market where investors borrow & lend trillions of dollars secured with Treasury bonds – falls deeper and deeper into disarray. In a repo operation, someone who wants to borrow money gives the lender a Treasury bond as security and as a result can borrow money more cheaply than if there’s no security. Looked at from the other side of the transaction, someone who wants to borrow the bond has to lend money at an interest rate that’s lower than what he could get by lending the money without any security. But nowadays, so many people want to borrow the newest 10-year note so that they can short it that they’re not lending money in return, they’re paying money, i.e. interest rates on lending secured by that particular bond in the repo market have gone negative – extremely negative, unusually negative. This is setting the repo market up for chaos.

And then there’s the even more esoteric question of the interest rate on excess reserves, fondly known as IOER, reserves being balances that banks hold at the Fed and excess reserves being reserves that they hold above what they’re required to hold. The Fed pays the banks interest on these excess reserves, except nowadays there are no excess reserves since the Fed dropped the minimum reserve requirement when the pandemic started. This rate is an important minimum for banks and there’s talk of the Fed raising it to 0.15% from 0.10% at the March FOMC meeting. Somehow this would help to prevent repo rates from going negative, although to be totally honest I’m not clear on how this works – I got out of fixed income many years ago when I realized you needed more than high school algebra to be successful in the field. (EG, my successor at one firm a few years later had a BSc in space physics and an MA in astrophysics – a genuine rocket scientist.) But Powell didn’t say anything about this idea either, which left market participants in the dark.

With the rate-setting Federal Open Market Committee (FOMC) meeting on March 17th, the Fed now enters into the “purdah” or blackout period. From Saturday until the day after the meeting, “staff will refrain from expressing their views or providing analysis to members of the public about macroeconomic or financial developments or about current or prospective monetary policy issues…” That means almost two weeks more of this uncertainty.

Powell’s silence on these important points caused chaos in the markets. Bonds yields rose (prices fell), as well as stocks and precious metals. The tech sector led the losses on Wall Street as the NASDAQ index lost its gains for the year. 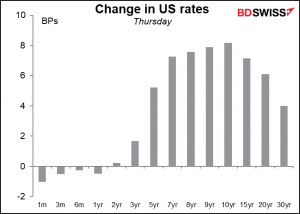 In the currency market, USD gained with the higher interest rates and virtually all other currencies fell. CAD held its own vs USD thanks to higher oil prices (see below), but the other risk-sensitive commodity currencies fell. At the same time, the safe-haven JPY weakened significantly too, an unusual combination probably caused by comments from Bank of Japan Gov. Kuroda, who said they weren’t thinking of widening the Japanese Government Bond trading range in their yield-curve control (YCC) program. IE, Japanese yields will remain low while US yields rise, creating an incentive for Japanese investors to park their money abroad.

Sentiment in Asia was weighed down by the news from China’s National People’s Congress, which began today. The government set a conservative growth target of 6% or more for this year. This modest target is well below the market consensus forecast of 8.4% or the IMF’s 8.1%. It suggests that the country will have more restrained monetary and fiscal policies this year than people had expected. In addition, the Chinese government has also said that it will narrow the budget deficit to 3.2% in FY 2021 from 3.6% in 2020, which means a negative fiscal impulse.

Meanwhile, oil prices rose as OPEC and Saudi Arabia decided to maintain their current production curbs for another month. 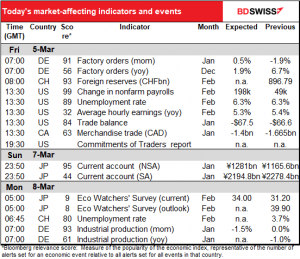 Today is US nonfarm payrolls (NFP) day! The most exciting day in the monthly US indicator calendar, although the weekly jobless claims have stolen some of the NFP’s thunder recently.

The market is expecting a pathetic rise of a little less than 200k jobs. This is what we were seeing back in pre-pandemic times, when the unemployment rate was at a 50-year low of around 3.5%. With unemployment officially at 6.3% and actually more like 10%, we should be seeing much bigger increases in jobs every month if the labor market were really mending. 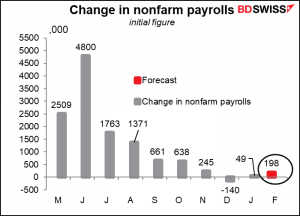 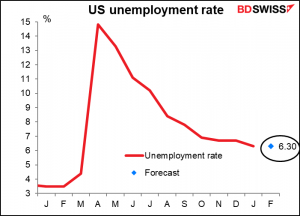 The Homebase data did show that the number of employees working was rising as February began. (The figures are only available with a one-month lag, so I don’t know what exactly happened during the February survey week.) 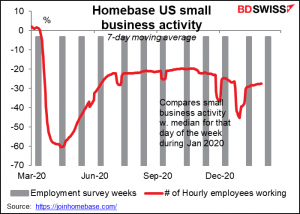 If you’re interested in taking a position in the FX market ahead of these figures or playing the trend after they come out, it seems to me you’d be better served by trading EUR/USD than USD/JPY. The former seems to be more volatile on NFP days than the latter, especially when the figure misses estimate. 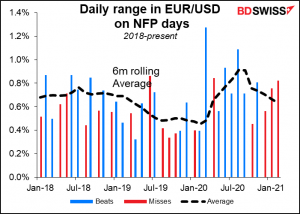 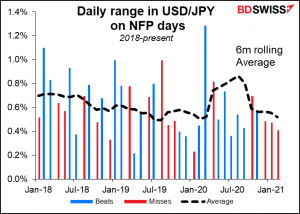 No Canadian employment data today by the way – this is one of the rare weeks when they don’t come out together. Canada will announce its employment figures next Friday.

The US trade balance is also coming out at the same time, but even at the best of times this doesn’t attract that much attention – I doubt if it will distract people from the NFP, especially as it’s expected to be pretty much in line with the recent trend. 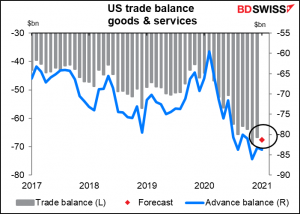 And by the way…

You may have heard that Texas and Mississippi dropped all restrictions related to the pandemic – no mask mandate, no businesses closed, no restrictions on how many people you can have in a restaurant or sports arena, etc. This is what the satirical website The Onion had to say about the decision: 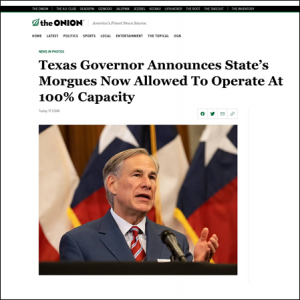 We’ll be following the course of the virus in Texas. While new cases have come down sharply there, it’s all relative – they still have over 6,000 new cases a day. That’s around 385 cases per million people – vs 203 cases for the US as a whole or 213 cases for the Eurozone. 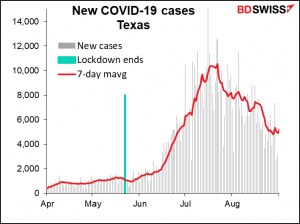 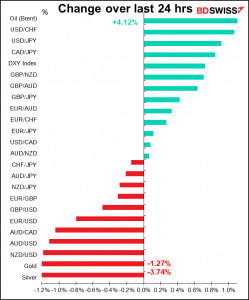