Market Recap
Well, I was wrong about the European Central Bank (ECB) meeting. I was even wrong about President Lagarde’s scarf! (she didn’t wear one this time.) They did take a concrete step to deal with higher bond yields, namely they announced that purchases under their Pandemic Emergency Purchase Programme (PEPP) would take place at a “significantly higher pace through to the end of Q2 than so far in 2021” (EUR 53bn in Jan, EUR 60bn in Feb).

They left open the question of how much “significantly higher” is. It would be reasonable to guess maybe EUR 10bn to EUR 20bn a month, or EUR 30bn- EUR 60bn a quarter. Combined with an anticipated decrease in the net supply of bonds (from EUR 255bn in Q1 to EUR 170bn in Q2, or EUR 85bn), this would lead to a major rebalancing of supply/demand, cutting the net supply by around half. That would probably result in significantly lower yields.

Yields on Eurozone bonds had already been turning down. The move accelerated yesterday. 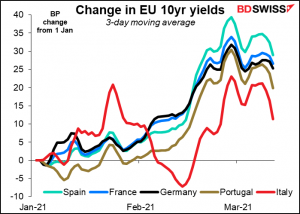 While accelerating PEPP purchases, the ECB also left the overall amount in the PEPP unchanged. This implies that they’re going to be able to slow their bond purchases later. Indeed, President Lagarde said in the press conference that the balance of risks is more balanced than they were before, and that’s without taking into account the impact of the US fiscal support package, which as the OECD noted will have large spillover effects to the global economy. There are a host of other reasons why they are likely to taper these purchases soon – perhaps as early as the June meeting.

Interest rate differentials play an important part in determining exchange rates, although in recent years the relationship hasn’t been as robust as it used to be. Nonetheless in theory the move should have been more negative for the euro than it was. Indeed, as soon as the announcement was made EUR/USD began to move down, but it quickly reversed the move after a headline ran saying “ECB is Said to Agree Risks to Outlook Have Become More Balanced.” It’s quite shocking that there would somehow be a leak from the central bank between the time the initial statement was issued and the time the press conference began. 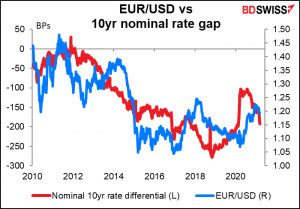 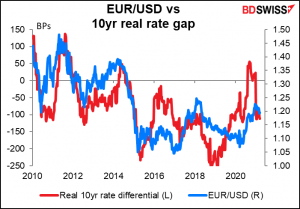 The relationship generally holds for EUR/GBP as well, although the pair has been higher (i.e., GBP weaker) than the rate differential would suggest ever since the Brexit referendum. 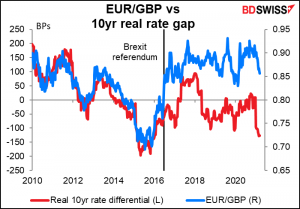 There are several reasons why it didn’t weaken EUR. First off, the move is likely to be temporary, as mentioned above. Secondly, the overall picture for the Eurozone economy is improving, as reflected in the ECB’s new forecasts (particularly, “underlying inflation to increase somewhat”). Third, the ECB said the reason they were doing this was to “prevent” a tightening of financial conditions, not “reverse” a tightening of financial conditions. So, they won’t necessarily be pushing yields lower, just preventing them from rising enough to tighten financial conditions – which are very loose. 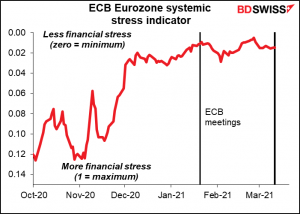 Finally, the dollar was down on the day thanks to the general “risk-on” mood in the market, perhaps thanks to another record close for the S&P 500, the first since Feb. 12th. Tech continued to recover, with the NASDAQ up 2.5% and the NYSE FANG index up 3.9%.

CAD was the best-performing currency on a further rise in oil prices. 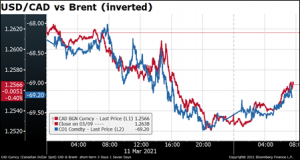 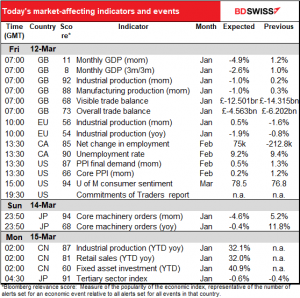 We’ve already had the UK short-term indicators. They were…

Canada’s unemployment rate is expected to fall slightly, while the number of jobs is expected to rise a bit after two months of declines. This is a good sign and may improve the outlook for the Canadian economy. However, it will probably not change any views at the Bank of Canada, which, like the Fed, is concerned not only with the overall level of unemployment but also with its composition. In the statement following this week’s meeting they said, “The labour market is a long way from recovery, with employment still well below pre-COVID levels. Low-wage workers, young people and women have borne the brunt of the job losses.” Nonetheless I think improvement is improvement and this figure is likely to be positive for CAD, although probably the oil price will play a bigger role in determining the direction today. 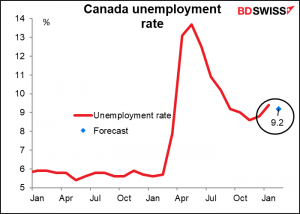 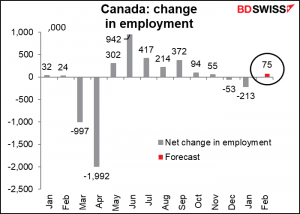 US producer prices are expected to accelerate noticeably in February. This may reignite the debate on whether inflation is going to come roaring back as increased demand stemming from the fiscal support payments and pent-up savings meets the bottlenecks that have arisen because of the pandemic (such as sharply higher freight rates owing to fewer airplanes flying). That could push US Treasury yields higher and support the dollar. 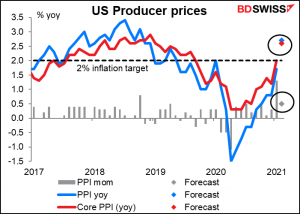 University of Michigan’s consumer sentiment indices are expected to be up a bit but to remain within the recent range. It seems the faster-than-expected vaccine rollout in the US has lifted financial market sentiment faster than consumer sentiment. 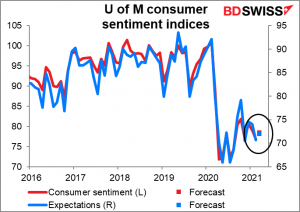 And on Monday, while I’m still asleep I assume, there are some important indicators from Japan.

Machinery orders are expected to be down after three consecutive months of increases. With the re-imposition of a state of emergency early in January, it’s no surprise if data for the month is weak. 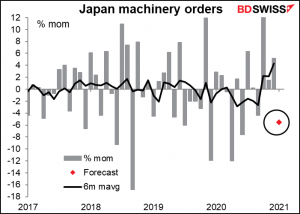 The tertiary sector is expected to contract for the third consecutive month, which would be discouraging for the Japanese economy except it would do no more than confirm the story told by the service-sector purchasing managers’ index (PMI) and the much-ignored Eco Watcher’s survey, which are both also showing a contraction of the service sector. 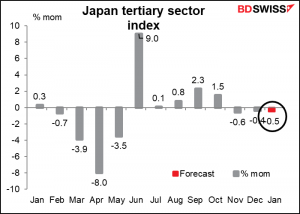 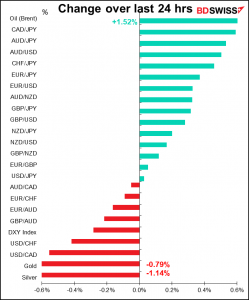