Fed Says Taper-Time is Drawing Near; Bank of England Meeting 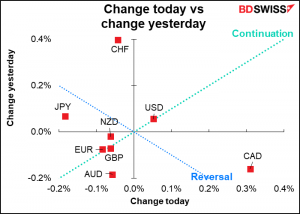 Finally! The Fed has decided it’s time to start tapering down its USD 120bn of bond purchases every month. As expected, the statement following the meeting of the Federal Open Market Committee (FOMC) said that “If progress continues broadly as expected, the Committee judges that a moderation in the pace of asset purchases may soon be warranted.” In his press conference, Fed Chair Powell said the “substantial further progress” test was already met for inflation and in his view was “all but met” for employment. He revealed that the decision on tapering “could come as soon as the next meeting,” which is Nov. 3rd.

Powell said the FOMC participants think that “so long as the recovery remains on track, a gradual tapering process that concludes around the middle of next year is likely to be appropriate.” That would imply a reduction of somewhere around USD 15bn a month.

The most significant change in the forecasts is that they raised their forecast for the core personal consumption expenditure (PCE) measure of inflation, their assumed inflation target, across the forecast horizon and expect it to be above 2% in 2024 (as is headline inflation. This is probably thanks to the more persistent bottlenecks that the economy is suffering. Powell’s comments on inflation in the press conference also were more hawkish than what he had said in his discussion of the topic in August at the Jackson Hole symposium. 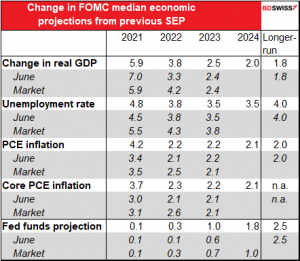 Some members of the Committee raised their forecasts for interest rates in line with the higher inflation forecasts. Members are now evenly split 9-9 on raising rates next year, with six members seeing one hike and three seeing two. This is a big c change from June, when the median dot showed no increase. They raised their 2023 rate forecast by a substantial 75 bps and see a further 100 bps of hikes in 2024. Nonetheless, their 2024 rate forecast would still leave rates below what they estimate to be the longer-term equilibrium level. That’s significant, given that they see inflation above their 2% target for the entire forecast period. It indicates that the “look-back period*” in their flexible average inflation targeting (FAIT) policy framework may be longer than people had thought.

It does appear that inflation, not employment, is likely to be the determining factor for the Fed to start hiking rates (“lift-off”) and for the pace of rate hikes. With the Committee currently evenly divided on hiking rates next year, “lift-off” may not come if core PCE inflation is at or below their current forecast of 2.3%. However if it exceeds that level and particularly if at the same time inflation expectations continue to rise, “lift-off” could come as early as next year after they finish tapering.

(*The Statement on Longer-Run Goals and Monetary Policy Strategy says, “In order to anchor longer-term inflation expectations at this level, the Committee seeks to achieve inflation that averages 2 percent over time, and therefore judges that, following periods when inflation has been running persistently below 2 percent, appropriate monetary policy will likely aim to achieve inflation moderately above 2 percent for some time.” The question is, how long is “some time?” Apparently it can be longer than four years.) 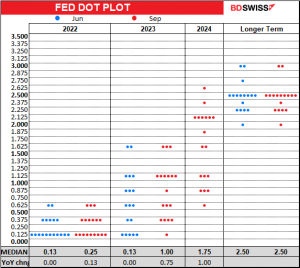 Curiously, the fed funds futures did not adjust entirely to the change in the dot plot. Usually the market is more aggressive than the Fed is, but for now the far-out contracts remain below the Committee’s median dot. This may however reflect low liquidity in those contracts — the most distant contract traded yesterday was July 2023 and there is virtually no open interest in contracts past Sep 2023. 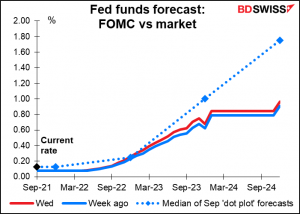 The meeting was much like markets had expected and the reaction was quite muted, in contrast to the frenzied speculation ahead of time about what the result would be. The 10-year Treasury note traded in just over a 4 bps range and closed down 2.2 bps, while the yield curve bull flattened (longer-dated bond yields fell more than shorter-dated yields). That implies the market’s confidence in the Fed’s willingness to raise rates to control inflation even though the dots vs the forecasts show that they’ll allow inflation to exceed their 2% target for the entire forecast period.

Indeed the forecasts imply a negative real fed funds rate for the entire forecast period. Yet the 10-year break-even inflation rate fell by around 2 bps. That suggests the markets don’t have much confidence in the global economy’s ability to withstand what used to be considered a “normal” interest rate environment. 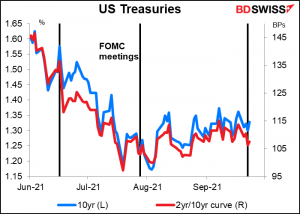 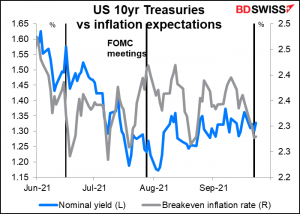 In equities, both the Euro STOXX 600 and the S&P 500 closed up around 1%. This morning most Asian stock markets are higher, including China (CSI 300 0.40%). The Hang Seng properties index was up 4.7% and the mainland banks index up 1.7%, suggesting that concerns over Evergrande are fading already. 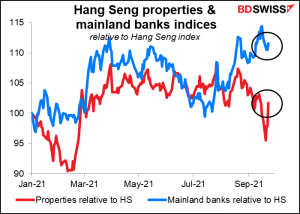 Despite all the excitement, currencies were rather tame, with most trade-weighted indices moving less than 0.1% from yesterday morning’s level. I suspect that’s because the results were largely as expected, although I think the tone of Fed Chair Powell’s comments plus the higher inflation forecasts suggest some change in thinking about inflation. This could lead the Fed to be more aggressive in hiking rates than the market is currently assuming, which would likely be positive for the dollar.

The best performer was CAD, which I wish I could attribute to the difference between US and Canadian monetary policy or other macroeconomic factors, but as usual it’s just oil. Why trade CAD when it’s just an oil derivative? The only point of interest here is how USD/CAD and oil diverged after the FOMC meeting (18:00 GMT), suggesting that yes, monetary policy does play some small role in determining USD/CAD. 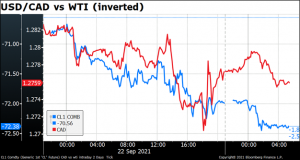 JPY retreated on a general “risk-on” mood. The Euro STOXX 600 and S&P 500 both closed up 1.0%. It is noticeable that JPY fell much more than CHF did, i.e. CHF/JPY continued to climb. Although the pair has levelled off this morning, I think that as concerns about Evergrande subside, CHF has room to fall further. 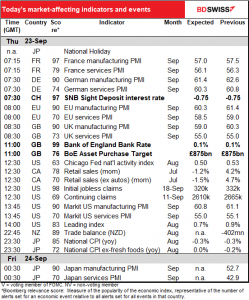 I discussed the Swiss National Bank (SNB) and the preliminary purchasing managers’ indices (PMIs) in my comment yesterday. Besides, those are probably out by the time you’re reading this.

So we can start out thinking about the meeting of the Bank of England Monetary Policy Committee (MPC). As usual, I wrote far more about this than anyone is interested in reading in my Weekly Outlook, so I’ll just summarize here what I said there.

Bank of England: steady as she goes

The Bank of England will probably remain on hold at this meeting. With no change in policy likely, the focus will be on any change in nuance in their forward guidance. At their August meeting, the Monetary Policy Committee (MPC) ratcheted up the guidance a bit in line with the improved forecasts in the Monetary Policy Report and said as follows:

The Committee judges that, should the economy evolve broadly in line with the central projections in the August Monetary Policy Report, some modest tightening of monetary policy over the forecast period is likely to be necessary to be consistent with meeting the inflation target sustainably in the medium term.

Much of the news since the August meeting has been disappointing. Slowing demand, an uncertain labor market outlook, soaring natural gas prices, and a looming shortage of beer isn’t really the time to turn more hawkish.

The only potential point of concern is that the headline rate of inflation leaped to 3.2% yoy from 2.0%, but the MPC has already said that they expect it to peak at around 4% this year so it would not force anyone to change their mind. 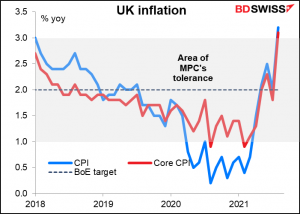 Given that the future is so uncertain and there’s no pressing need to change policy at this meeting, I’d expect another unanimous vote to keep the Bank rate unchanged and probably another 8-1 vote to maintain the QE program (8-1) (external member Michael Saunders being the dissenter there who wants to end it early). “Steady as it goes” is usually not a source of volatility for the FX market and I would expect little change in the pound, unless of course they fiddle substantially with their forward guidance.

How does the pound move after Bank of England meetings? Answer: sometimes up, sometimes down. On average, it doesn’t seem to move at all. So we can’t say anything ahead of time, we just have to wait to see what the result is. 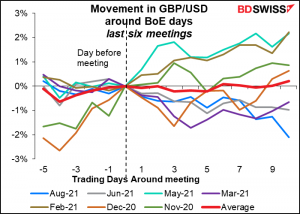 Then overnight we get Japan’s national consumer price index (CPI). People pay more attention to the Tokyo CPI (grey line in this graph) because it’s a pretty good indication of the national CPI and comes out two weeks earlier. So markets aren’t as sensitive to the national CPI for Japan as they are for other countries. In any case, it’s expected to show that Japan remains in deflation.

Wednesday’s Bank of Japan meeting said that core CPI “is likely to turn slightly positive, mainly reflecting the rise in energy prices” (although it didn’t say when this was likely to occur). Nonetheless, “slightly positive,” followed by “increase gradually” means in effect no big change in the inflation picture is expected for some time to come. 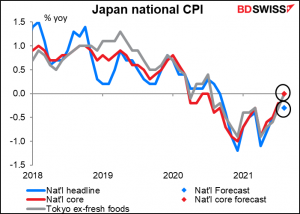 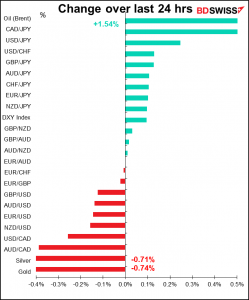