GBP Up For Heaven Knows What Reason; US PPI 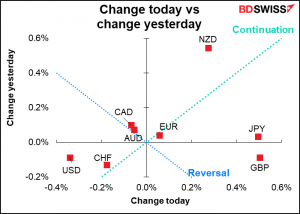 I have to say I’m astonished at today’s outperformance of GBP. I can only assume it’s simply some profit-taking or position-closing after the recent sharp move, because I struggle to find any fundamental reason why the currency should be gaining. Perhaps we should call this a “Lear move,” as in that line from King Lear: “O, reason not the need!”

First off, we had more mixed messaging from the Bank of England’s senior management, who really should be sent on a course on how to talk to the press. Speaking in a Q&A forum with citizens, Gov. Bailey said “What we’re concerned about… is once you start to get an increase in inflation of this sort we want to stop it becoming generalised in the economy. And that’s why we would, and will, have to act on interest rates if we see that evidence becoming clear.” Yet another hint that a rate hike is coming, just as he said a few weeks ago that he was giving a “signal” about an imminent hike – one that didn’t happen. This comes a few days after BoE Chief Economist Pill warned against raising rates and derailing the recovery “in a misguided attempt to clampdown on short term price pressures.” Not much consensus there yet.

Secondly, the political uncertainty in Britain is heating up as the tension between the EU and UK over Northern Ireland heats up. There’s now talk that Britain may trigger Article 16 of the Northern Ireland Protocol and take “unilateral measures” that would in effect suspend the arrangement on Northern Ireland, perhaps as soon as the COP26 summit concludes on Nov. 12th. That would send the whole fragile Brexit agreement into a tailspin and precipitate a trade war with Britain’s largest trade partner.

Third, UK real yields fell to a record low yesterday, at least according to the data I have. 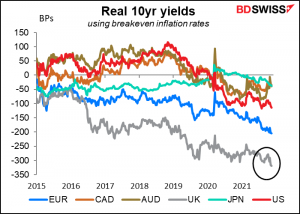 Given this terrible background, I can only assume that this move is a temporary technical adjustment and GBP is likely to resume its seemingly ineluctable downtrend in the not-too-distant future, although I have been known to be wrong once or twice in the past.

It was “risk-on” all the way in the stock markets, as the S&P 500 eked out a small ( 0.1%) gain to hit a record high for the eighth consecutive day. The NASDAQ, DJIA and Euro STOXX 600 also moved further into record territory (although the STOXX 50 was lower).

Yet the risk-sensitive JPY vied with GBP as the top performer. It seems that the uncertainty over the next US Fed Chair is causing some questions over just how quickly the Fed might raise rates. Chair Powell’s term is up next February and President Biden is weighing whether to reappoint him or to appoint Fed Gov. Lael Brainard in his place. Powell can hardly be called hawkish, but Brainard, the only registered Democrat on the Board of Governors, is probably more dovish. 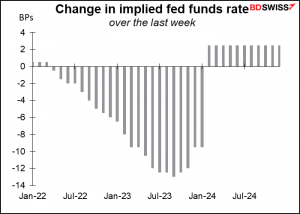 There are also several other openings on the Board of Governors that Biden can fill, and it’s expected he would fill them with more dovish people than a Republican would (although the role of head of banking supervision is likely to go to a more stringent individual).

Gov. Randal Quarles, whose term as Vice Chair for Supervision ended last month, said he would leave the Board of Governors in December. (This role – in charge of banking supervision – is the other role that Gov. Brainard is being considered for.)

Also Vice Chair Richard Clarida’s four-year term finishes at the end of January. Although he could stay on the Board of Governors after that, it’s customary to leave, as Quarles is doing. Furthermore there’s still one more additional vacant post on the Board as the Senate finally said “enough is enough” and rejected the appalling Judy Shelton, among the worst nominees of the horrific Trump era.

Thus Biden has a significant opportunity to shade if not shape US monetary policy. If I were he, I’d reappoint Powell just to show my bipartisanship (Powell is a Republican appointed by a Republican president) and appoint Gov. Brainard to Vice Chair of Supervision, where she would be one of the few banking supervisors not compromised by “regulatory capture.” But alas no one voted for me for President so I can’t make it happen. 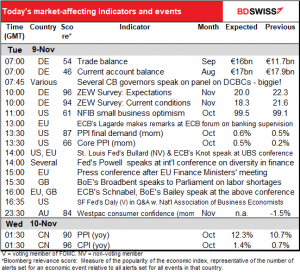 Most of the action today has to do with speeches, not indicators. European Central Bank (ECB) President Lagarde will give opening remarks at an ECB forum on Banking Supervision. Will she drop some bombshell about monetary policy? Probably not. But the market often moves on senior officials repeating what they’ve said a million times before anyway.

Ditto for Fed Chair Powell’s opening remarks at a conference jointly hosted by the Fed, ECB, and Bank of Canada that will focus on research about diversity and inclusion in economics, finance, and central banking. Bank of England Gov. Bailey and ECB Board member Schnabel will speak at that conference too.

There will be an EU finance ministers’ meeting. They’ll discuss:

● The EU economy after Covid-19: Implications for economic governance
● Economic Recovery in Europe: Implementation of the Recovery and Resilience Facility (RRF)
● Economic Recovery in Europe: Financing of the Next Generation EU (NGEU)
● Energy prices, inflation and policy implications
● Conclusions on the future of the European Semester in the context of the RRF
● Follow-up to the G20 Finance Ministers and Central Bank Governors and the IMF annual meetings of 13-14 October 2021
● Conclusions on EU statistics
● European Court of Auditors’ annual report on the implementation of the budget of the EU for the financial year 2020

I must admit, it’s a mystery to me how they can have any substantial discussion of all these complex matters in three hours. My wife does movie reviews and she can spend 1 ½ hour talking just about “Eternals.” I’d love to know how the discussions go. No, I take that back, it’s probably pretty boring. I would guess they just hear a report from some lower-level functionary and vote “Accepted.”

Adding to my suspicions, President Lagarde managed to fit the results of yesterday’s Eurogroup meeting (the Eurozone finance ministers by themselves) into a 280-character tweet, so maybe it is possible.

The most interesting conference of the day for my esteemed readers is probably going to be a conference to commemorate the 30th anniversary of The Bank of Finland Institute for Emerging Economies (BOFIT). They will have a panel discussion on central bank digital currency “Digital currencies around the world – what are the policy implications?” The discussion will be chaired by Bank of Finland Governor & ECB Board member Olli Rehn, with participation by the governors of the central banks of Russia and China, plus Fabio Panetta, who seems to be the ECB’s point man on CBDCs. I’ll be interested in hearing what China and Russia have to say about this matter.

As for the indicators…

Both of the ZEW Survey indicators – current situation as well as expectations – are expected to decline. 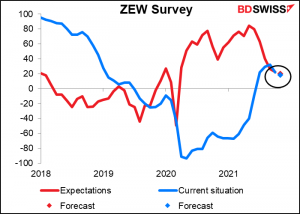 That’s no surprise when both the manufacturing and service-sector PMIs for the country are declining. Still, more bad news could be slightly negative for EUR. 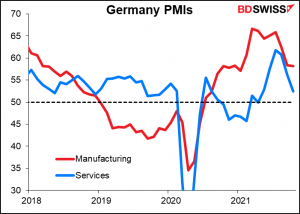 Today’s US producer price index (PPI) is expected to show only a moderate rise, in contrast to the Brobdingnagian leap (my first time ever using that word in a column!) that’s expected from tomorrow’s US consumer price index. (Perhaps when talking about leaps I should use Rhodian, as in the Aesop’s Fable “The Leap at Rhodes.”) I don’t think a slowdown in inflation would be negative for the dollar though as it probably won’t slow down enough to get them to postpone hiking rates, so this indicator is likely to be neutral for the dollar. 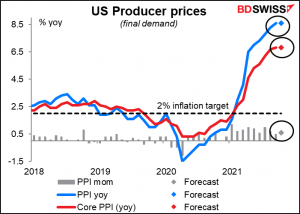 The indication that the PPI may be peaking could lend some weight to the Fed’s watered-down thesis that the current high level of inflation is caused largely by “factors that are expected to be transitory.” Especially if we take the three-month change in the PPI and annualize it, we can see a sharp deceleration – albeit from a very high level. 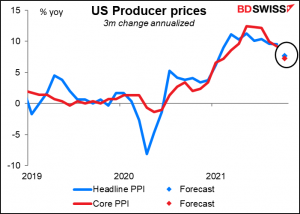 However, while many people think the PPI is the precursor to the CPI – that is, companies raise their prices and then the retail trade has to raise theirs – it doesn’t always work like that. The interaction between the two is much more complicated. If you’re interested, I wrote a piece on it that’s available on our website (The PPI and the CPI: what’s the connection?) if you’re interested.

Speaking of PPIs and CPIs, China announces its PPI and CPI overnight. That’s a good example of how the two don’t necessarily move in the same direction, although in China’s case that’s probably because food accounts for so much of the CPI.

The continued rise in the China PPI is worrisome for the “transitory” inflation thesis, because China’s PPI is effectively the import price index for other countries. This means rising prices for China’s exports, which can keep upward pressure on prices globally. I’m not sure this affects any particular currency but it’s worth noting for the impact on the global inflation picture. 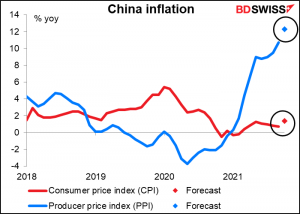 As you may have noticed, I like graphs. I saw this graph in the Financial Times and thought it was one of the best (and prettiest) I’ve ever seen: a fantastic use of color to keep the data legible. It’s also quite informative as it shows the countries that should be the winners and losers financially from the recent surge in natural gas prices, although currencies haven’t been taking much notice of this – perhaps the amount of money involved isn’t that great (I’m not sure about the value of natural gas flows vs oil). 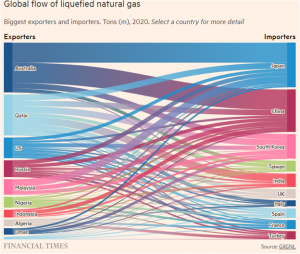 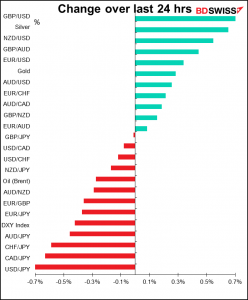