Has Bitcoin Reached the Bottom?

The total capitalisation of the crypto market, according to CoinMarketCap, sank 15% over the week to $1.30 trillion. The bitcoin dominance index jumped 2.9 points to 44.4% over the same period due to a sharp weakening of altcoins. 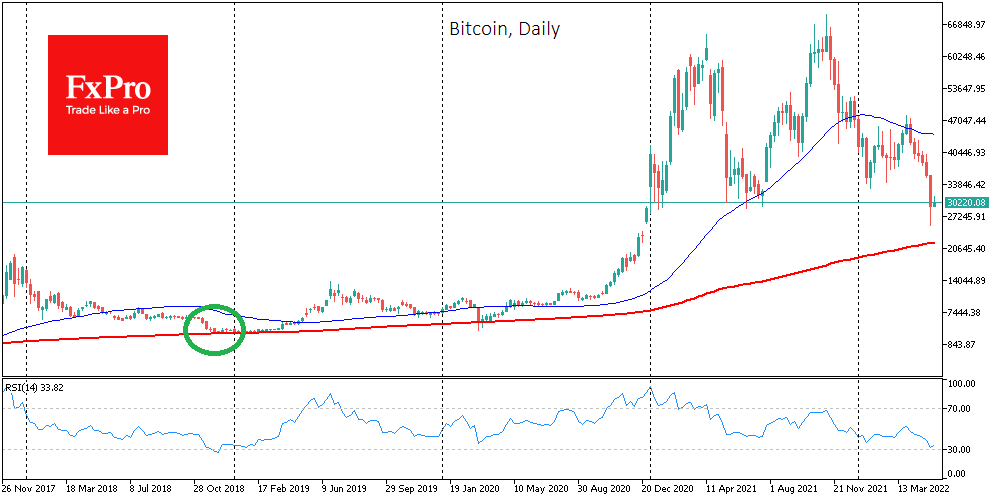 The cryptocurrency fear and greed index fell 8 points in the week to 10 and continues to be in “extreme fear”. By Monday, the index had climbed to 14 points, thanks to the cryptocurrency market’s retreat from local lows at the end of last week.

Bitcoin has declined for six weeks in a row, along with stock indices. A prolonged one-way move in Bitcoin was last seen in late 2018 when the first cryptocurrency hit a cyclical bottom. That was followed by many more months of sluggish momentum, so investors have an essential question: choose a low point to buy or join the move when it is certain. Prudence suggests that it is less risky to follow the second strategy.

Last week’s decline intensified after breaking through last year’s lows near $30,000, becoming the most significant weekly drop since January.

The story of the Terra (LUNA) crash and the TerraUSD stablecoin project added to the negativity on the crypto market, hitting all altcoins hard.

According to Global Macro Investor CEO Raul Pal, May and June will be the most worrying months, so a new wave of selloffs in the crypto market is inevitable.

Legendary investor Bill Miller said he sold some of his BTC holdings. Although bitcoin may continue to decline in the short term and even drop by half from current levels, Miller looks at bitcoin positively and expects it to grow over a long time.

Robert Kiyosaki, the world-famous author of the bestselling book Rich Daddy, Poor Daddy, is looking to buy bitcoin once it tests the ‘bottom’ at $17,000. The businessman has once again expressed distrust of the US government.