Normally I start my day by looking at the stock markets to see whether we’re in a “risk-on” or “risk-off” mode. However, we can’t rely on that barometer so well nowadays to give the FX market direction, because what we’re seeing in the stock markets nowadays is rotation.

Since the news of a successful vaccine broke back in November, pretty much everything has gone up. Now however with the rise in bond yields investors are being more discerning. Some of the favorites – in particular, the tech stocks – are declining while stocks that usually benefit in a recovery, such as consumer discretionary and banks, are rising. 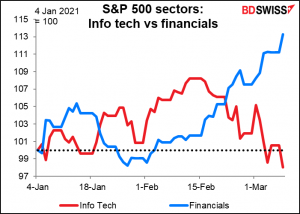 We can see that if we compare the S&P 500 equal-weight index (which eliminates the excessive impact of the mega-cap tech stocks, such as Amazon, Apple and Tesla) and the NYSE FANG index, which covers those 10 stocks exclusively (Facebook, Apple, Google, Tesla and several others). 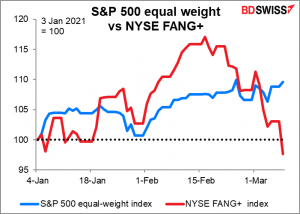 On the other hand, Gamestop jumped 41% yesterday, so there’s apparently still hope for the darlings of the retail investors.

The Treasury market was less volatile yesterday, but 10-year yields still moved about 2.5 bps higher on expectations that President Biden’s will get his full $1.9tn fiscal support package, following its successful passage in the Senate over the weekend. The House of Representatives now has to vote on it today and then it goes to President Biden for his signature.

In the FX market, JPY continued to weaken on the view that Japan is one of the countries where long-term rates will not be allowed to rise, thereby limiting the attractiveness of Japanese bonds relative to foreign bonds. This follows Bank of Japan (BoJ) Gov. Kuroda’s comments in Parliament on Friday that there is no need to change the trading band for the 10-year bond within the Bank’s Yield Curve Control program, which is being reviewed for possible change at next week’s Policy Board meeting.

(In September 2016, the BoJ introduced a new framework for monetary policy, “Quantitative and Qualitative Easing with Yield Curve Control (QQE with YCC).” In addition to its QQE pledge from 2013 to buy some JPY 80tn a year in assets, YCC set a target for 10-year Japanese government bond (JGB) yields of “around zero percent,” which was about what they were yielding at the time. There was an unstated fluctuation band of ±10 bps around the target, which the BoJ widened to ±20 bps in July 2018. That means Japan’s 10-year yield is effectively capped at 0.20%.)

The focus yesterday was on a speech by BoJ Deputy Gov. Amamiya, who is believed to be in favor of widening the YCC trading band, but in the event his comments didn’t differ materially from Gov. Kuroda’s. That allowed USD/JPY to continue its uptrend (which helps me a lot as my daughter in Kyoto just moved into a new, more expensive apartment! I never lived in such a place when I was a student in Kyoto.)

The graph below shows the yield pick-up that Japanese investors can get from buying US Treasuries instead of JGBs on an unhedged basis (blue) or by hedging the currency risk (red). Note how that yield pick-up has steadily risen and with it, USD/JPY has risen too. 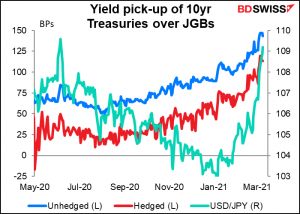 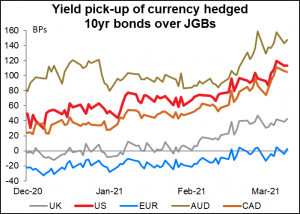 But the data suggest that in fact Japanese investors have been selling foreign bonds, at least over the last four months. My experience, which may well be out of date (I left Japan in 2005, after all) is that Japanese investors tend to be trend-followers who prefer to sell into weakness and buy into strength. Thus, when they think that the sell-off in Treasuries has gone far enough, they are likely to put more money abroad, thereby pushing JPY down even further. 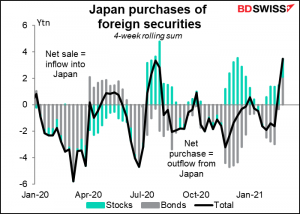 And according to the Commitments of Traders report, the market is still long JPY – long and wrong! 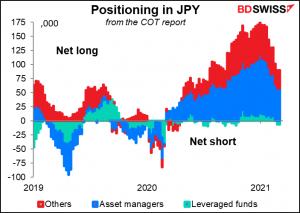 So, it seems to me that there are plenty of sellers left and JPY can weaken much further.

As for why GBP is the best-performing G10 currency of the day, that’s a bit of a mystery. Certainly it has nothing to do with good news on the Brexit front (see at the very bottom). Bank of England Gov. Bailey had some dour things to say, including that the risks to the economy remained tilted to the downside, unemployment is likely to rise and remain high in the year ahead, and the BoE does not intend to tighten monetary policy any time soon. Perhaps because he didn’t say anything about instituting negative rates, his comments weren’t as negative for GBP as some people had anticipated. Also, GBP benefitted from EUR weakness, including selling EUR/GBP. 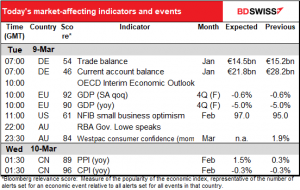 Not such an exciting day today for the ol’ indicators.

The Organisation for Economic Co-operation and Development (OECD) publishes its Interim Economic Outlook. There will be an online press conference on Facebook you can watch about it if you’re interested. Sometimes this publication can boost or depress a currency if they upgrade or downgrade the outlook for a country.

I would expect that this time it might help promote a “risk-on” mood in the market, with the commodity currencies higher and USD & JPY & CHF lower, as I expect that they’ll be more optimistic than they were when they published the last version, in December.

Here are the main forecasts from that one: 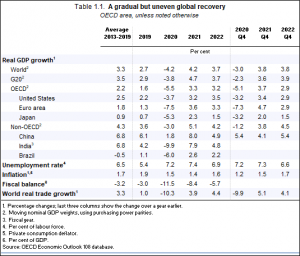 It will be particularly interesting to see what they have to say about Britain now that it’s out of the EU. Last time they said, “GDP is set to contract again in the fourth quarter of 2020 as virus containment measures are implemented, and to fall by 11.2% in 2020 as a whole. Growth of 4.2% in 2021 and 4.1% in 2022 is projected to be driven by a rebound of consumption, while business investment will remain weak due to spare capacity and continued uncertainty.” Annual GDP figures for Britain aren’t available yet, but -11.2% seems to be a bit excessive. I suspect they could revise this figure up and give a rosier outlook for the UK, which might boost the pound.

The Eurozone comes out with its final revised Q4 GDP figures, but I would be amazed, astonished, and abashed if there were any significant changes.

Then that’s it for major indicators for today. (I’m trying to make this comment a bit shorter nowadays and so generally not commenting on indicators that get less than a 80 Bloomberg relevance score unless I happen to be particularly interested in them).

The next excitement will be overnight, when China releases its inflation data. The consumer price index (CPI) is expected to show prices falling at the same pace as in the previous month, but the producer price index (PPI) is forecast to show a faster pace of increase.

That’s worrisome, because China is the “canary in the coalmine” for prices around the world. They were the first to be affected by the pandemic and the first to come out (somehow). So far, their data has shown that the impact of the pandemic is not necessarily inflationary – on the contrary, inflation has come down in China during this time. But with China, the CPI isn’t the relevant metric, that’s mostly food and it doesn’t imply much about global trends. The PPI on the other hand reflects industrial trends and that’s starting to rise after a long period of deflation. 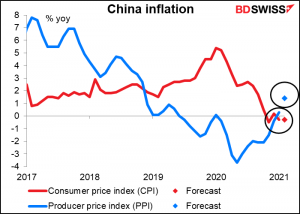 That has a big impact on import prices in other countries, which can be significant for their inflation. It’s also a hint of what might be coming to a country near you sometime soon. In that respect, it could spark thoughts of higher inflation globally and rekindle the global bond market sell-off. 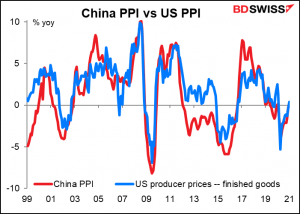 “British ports are urging the government to delay the next wave of Brexit red tape, saying border checkposts won’t be ready for the July deadline.” 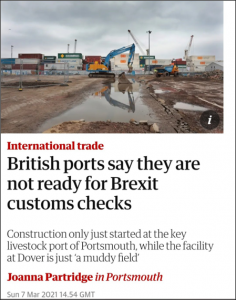 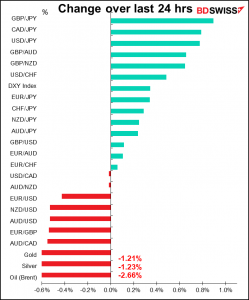