JPY Up, AUD Down in “Risk-Off” Market; US Leading index 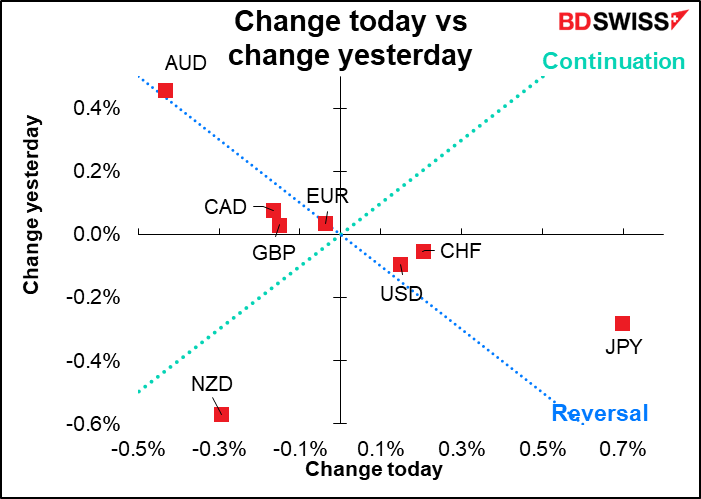 Same old same old today – fears of higher interest rates and “quantitative tightening” sent stock markets and the commodity currencies down, while the “risk-off” sentiment sent JPY soaring. Everything else was kind of caught in the middle and not particularly affected.

The graph below shows how AUD/JPY tends to move roughly in line with the S&P 500’s deviation from trend (the % difference between the index and the 6-month moving average of the index). No surprise then that when stocks are down, AUD/JPY is liable to be down, too. 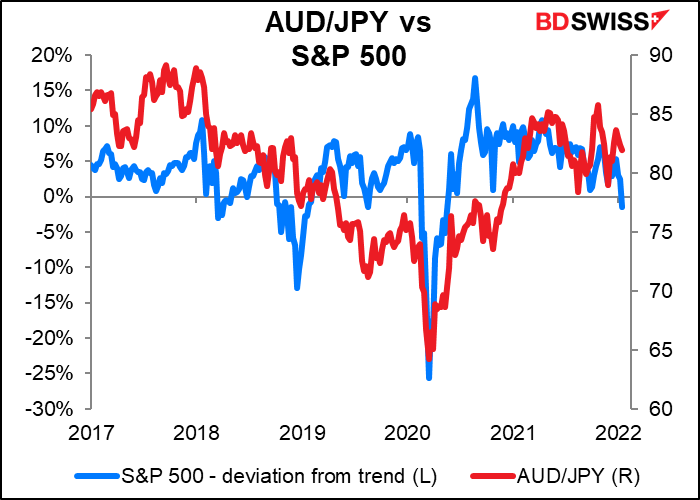 US stocks followed a familiar pattern yesterday of stabilizing during early trading only to weaken late in the day. The S&P 500 was up 1.5% a few hours after the New York opening, but it gradually lost the gains. It was unchanged with 45 minutes left to go in the session and then the fall accelerated to close down 1.1%.  It’s now down 4.5% YTD and off 7.0% from its record intraday high on Jan. 4th.

The NASDAQ was down 1.3% and is now down 9.5% YTD, off 11.9% from its record high. The NASDAQ closed below its 200-day moving average for the first time since the pandemic hit.

Things only got worse for tech stocks after the close as Netflix Inc. missed forecasts for new subscribers and forecast that it only expects to add 2.5mn new subscribers this quarter, far below expectations of 6.26mn new viewers. The company’s shares fell as much as 20i%. Pelaton interactive Inc, makers of fancy stationary bicycles and another “stay-at-home” darling, also has been crashing recently on reports that it was temporarily halting production (a rumor that the company said was false). It looks like the pandemic-induced boom in “stay-at-home” stocks is over. 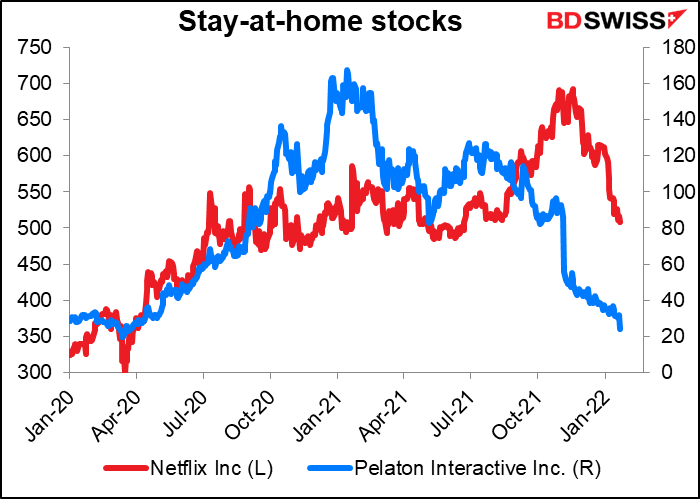 The US yield curve has been twisting and therefore flattening, with short-end yields rising and long-end yields falling. 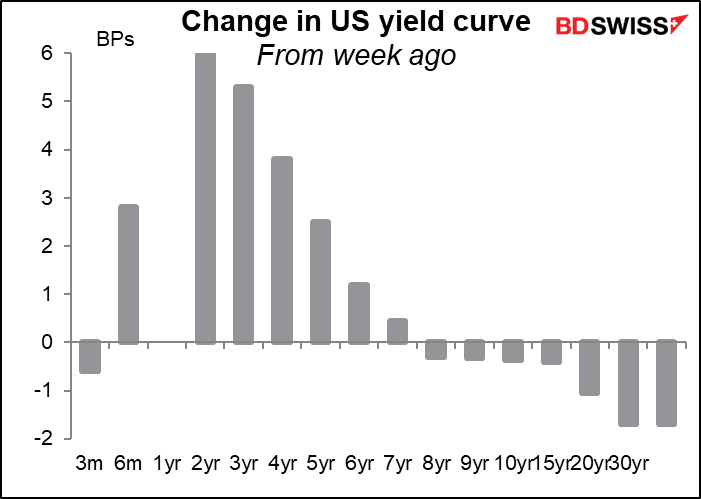 This flattening is somewhat worrisome as every US recession in recent years has been preceded by an inversion of the US 2yr/10yr yield curve. The 2yr/10yr curve is currently 76 bps, half the level of March last year. The risk of a recession might cause the Fed to ease back on its tightening, which would tend to be negative for USD. 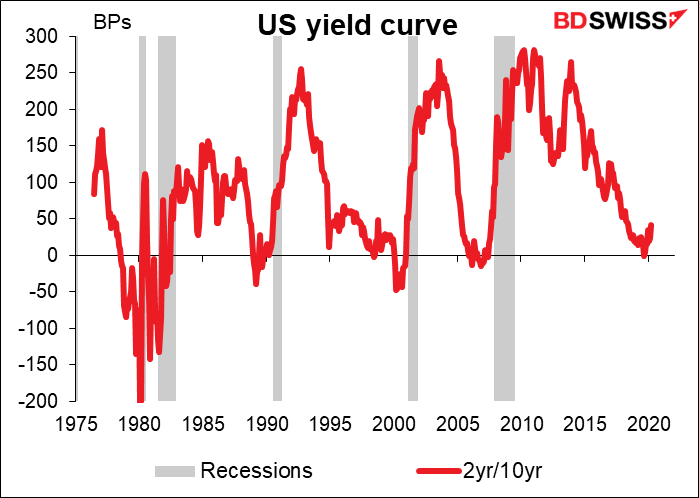 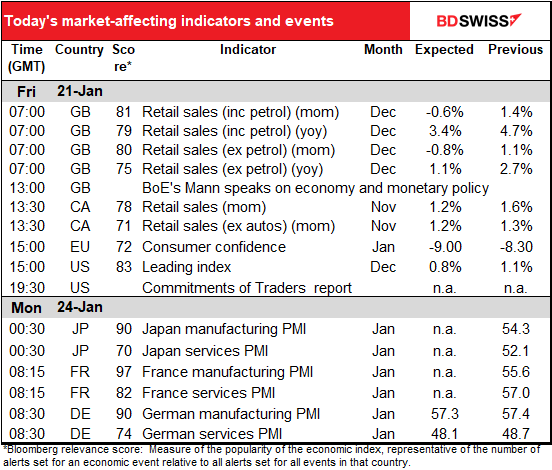 We already discussed the UK retail sales yesterday. In the event they were much much worse than expected – down sharply on a yoy basis instead of being up as expected.

Today we’ve also got the Canada retail sales to look forward to too. We already know that auto sales fell a bit in the month, but on the other hand, higher gasoline prices probably boosted sales at gasoline stations. Net net both versions of the numbers – with and without autos — are expected to be up about the same (with autos has a higher Bloomberg relevance score, but ex-autos seems to have a better correlation with the subsequent movement of the currency). 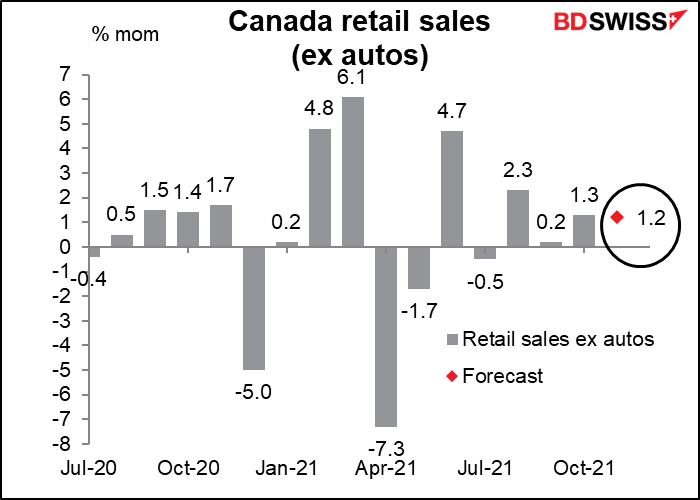 At any rate, Canada has been doing much better than many other countries when it comes to retail sales. Sales on this forecast would be some 14.5% above pre-pandemic levels. This may be a result of the Bank of Canada’s extraordinary loosening (it expanded its balance sheet to almost 5x the size it was before the pandemic) which financed a fiscal stimulus amounting to 23% of GDP. 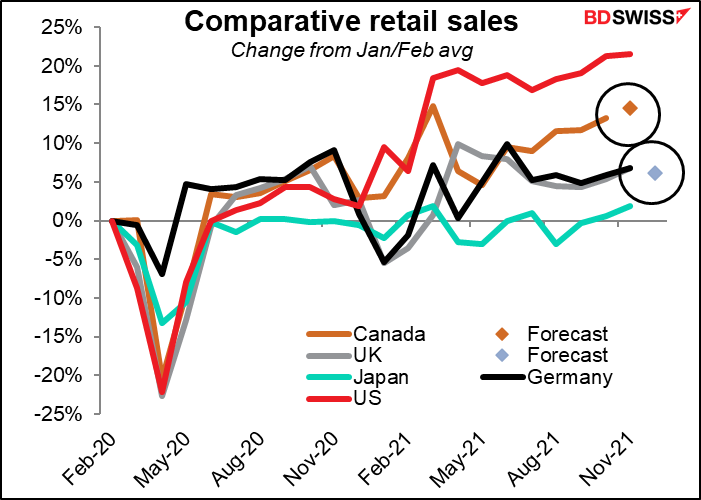 I don’t think EU consumer confidence is a big market-mover. In any case, it’s forecast to be down slightly, which I think would be pretty good considering the explosion of new cases of the virus in Europe, the lockdowns in some countries, the demonstrations against lockdowns in other countries, etc. etc. Perhaps people are just feeling more confident because they’ve been vaccinated. (I get a vaccination rate of around 77% for the Eurozone as a whole, ranging from 67% in Greece to 89% in Portugal.) 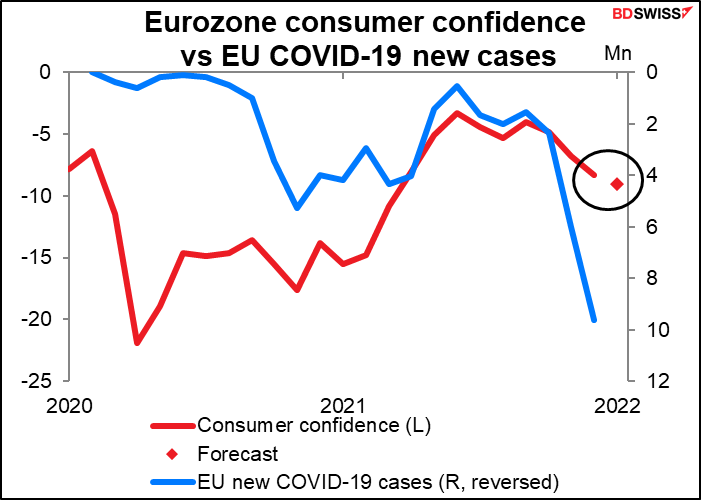 The US leading index is forecast to be pretty much in line with the previous three months and almost exactly at the six-month moving average. In other words, showing no likely change in the pace of growth in the US in December. The Atlanta Fed’s GDPNow forecast for Q4 GDP is 5.0% qoq SAAR while the St. Louis Fed forecasts 3.73%. These would be higher than the 2.3% qoq SAAR growth rate for Q3. That’s pretty strong growth that would allow the Fed to go ahead with its plans to tighten policy rapidly. It should be positive for the dollar. 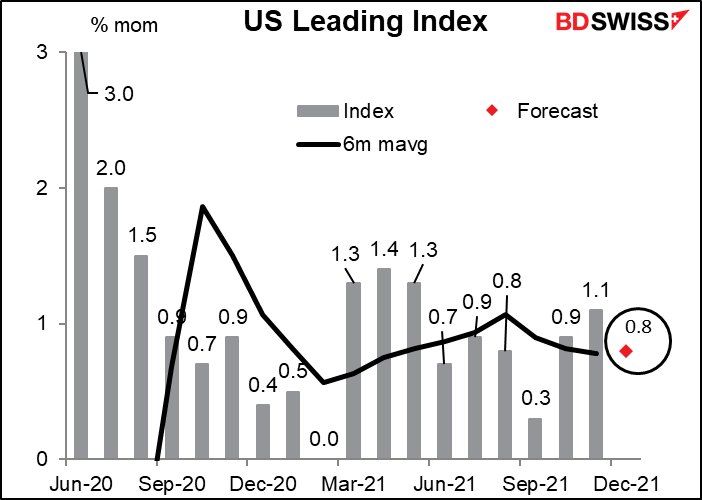 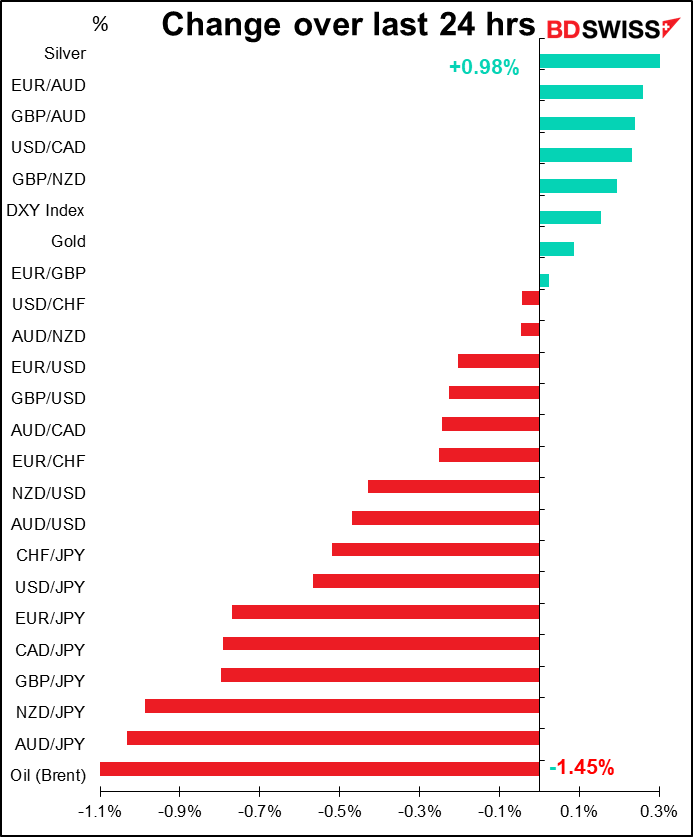