JPY Up, Commodity Currencies Down as Virus Cases Surge Gain

Once again JPY moved higher even though wise & sagacious analysts with years of experience and profound insight into the market (read: me) expected it to fall. Why? One possible reason could be those poor bereft souls who alas don’t have the benefit of reading this analysis, namely individual Japanese investors. The Nikkei reported (sorry, it’s in Japanese) that short USD/JPY positions at four major retail brokers in Tokyo amounted to some $4.5bn, the highest they’ve been since April 2013, when the Bank of Japan started its “qualitative and quantitative easing (QQE)” program. That compares with the $6.1bn long USD/JPY position that speculative accounts have in the US futures market, according to the Commitments of Traders report. It appears that USD/JPY hitting the 111-mark for the first time since March last year triggered this interest. That level proved strong resistance then – it hasn’t been able to break much over that since end-2018 – and may have brought in technical traders.

Another reason for the higher JPY may have been the general risk-off tone, which sent the commodity currencies (NZD, AUD, CAD) lower. This was prompted by the renewed virus fears. People are getting spooked by the rapid resurgence of cases in Israel. It’s still nothing compared to earlier this year, when over 8,000 new cases a day were appearing. It’s just the fact that it’s cropping up in Israel, the country with probably the highest rate of vaccination in the world. The 7-day moving average of new cases is 172, which isn’t much but it’s more than four times the 43 cases a week ago. If it can happen here, it can happen anywhere, as the song (kind of) goes. 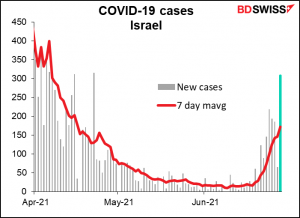 The UK reported 22,723 new cases, its highest number of new cases since end-January. The 7-day moving average is 16,404 new cases a day, which is 71% higher than a week ago This kind of acceleration is alarming. Several countries have taken steps against the UK: Hong Kong banned all passenger flights from the UK from July 1 and Portugal said that arrivals from the UK who aren’t fully vaccinated will have to quarantine for 14 days. Nevertheless, UK PM Johnson said the country was “very likely” to remove the remaining restrictions on schedule on July 19. The reason is that with so many people already vaccinated, the higher number of new cases isn’t causing a higher number of deaths. 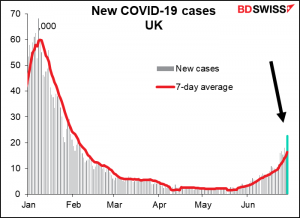 European stocks ended lower, with travel & leisure stocks hit particularly hard on expectations that tourism in general and particularly from Britain would suffer this year. Oil was down for the same reason: more lockdowns = less travel. US stocks managed to eke out a small gain, but Asian stocks are generally lower this morning as the risk-off tone continues. Look for further continuation of this pattern until there’s more confidence that the virus is coming under control – that the link between new cases and deaths has been broken by vaccination, for example. 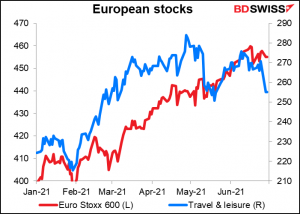 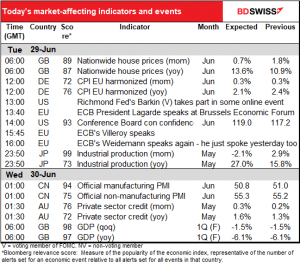 We also discussed the North Rhine Westphalia consumer price index (CPI), which I pointed out has a much better correlation with the national German CPI than Saxony’s does. I used to put Saxony in the schedule every month until I realized that NRW came out much earlier and had a better correlation. This morning, the NRW CPI was 2.5% yoy, down slightly from 2.6% yoy in the previous month, which suggests that the forecast slowdown in Germany’s EU-harmonized national CPI is likely. The CPI is expected to keep rising at the same mom pace, but owing to base effects that should mean less of a yoy rise (prices were up 0.7% mom in June 2020 vs unchanged mom in May 2020). 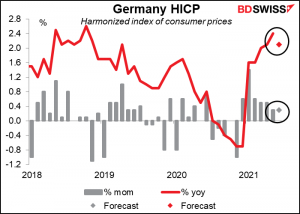 The Brussels Economic Forum is the flagship annual economic event of the European Commission.

This time, after over a year of unprecedented measures for the people and the economy, the BEF will look at ways to build the new economy we want.

Her so-called “keynote address” is only 10 minutes, so I don’t expect her to say anything particularly profound or market-moving. You may think that’s short, but NZ PM Ardern has another keynote address later in the afternoon that’s only 5 minutes! Ursula von der Leyen will give the opening address for 10 minutes and Chancellor Merkel will speak for 10 minutes. Clearly the focus is on the longer panel discussions. If you’re interested, I gather this will all be streamed live (see link above) – you may have to register, I’m not sure.

In the US we get the Conference Board consumer confidence index. It’s been doing better than the U of M consumer sentiment index. The Conference Board measure is more heavily weighted towards the labor market while the Michigan methodology places more emphasis on longer-term macroeconomic expectations. 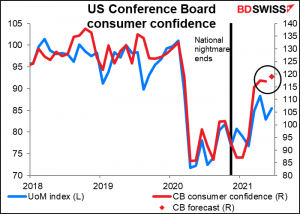 Those who lucubrate over these kinds of indicators will be examining the jobs diffusion index, which is calculated by taking the percent that say jobs are “plentiful” and subtract the percent that say jobs are “hard to get.” This DI was at 34.6 in May, still some ways off its record high of 46.2 set in 2000. If that improves further it’s a sign that unemployment is likely to continue to decline. 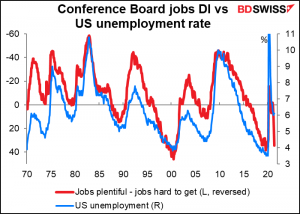 Overnight, Japan releases its industrial production data. It’s expected to be down mom after three months of increase, thanks to the fall in export volumes. 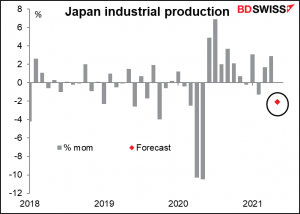 The recovery in Japan’s IP was leading the major countries, but with this setback it’ll be more or less in line with the US. Which isn’t bad, just isn’t outstanding anymore. 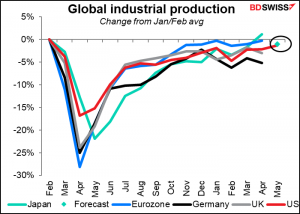 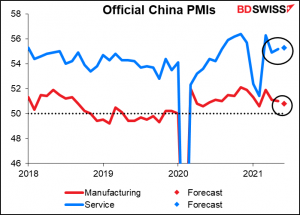 Australia’s private sector credit is expected to be up sharply as the COVID-19 freeze on economic activity fades and businesses start to get back into gear, on top of a booming housing sector that’s responding to record low rates and government incentives. 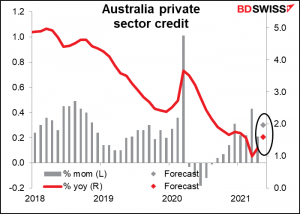 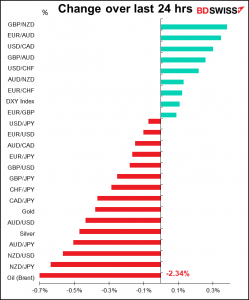