The FX market is still spooked by the Fed’s change in tone.

One of the key points is that the Fed has changed its reaction function. It used to be that they would change policy in response to their forecasts for inflation and employment. The reason for operating that way is because monetary policy affects the economy with a lag of up to three quarters. They therefore have to aim at the target that they expect to see in three quarters. Of course, this way of operating has the flaw that their forecasts may be wrong, which they often are.

As Chair Powell and others have mentioned, they are no longer going to move in response to forecasts, but rather in response to actual data. Unfortunately, this policy has a flaw too: what if they think the change in the economy is only temporary, as they do now? It seems from looking at the “dot plot” that the Committee members have remained true to their new policy. Even though they argue that the rise in inflation is only temporary – which is a forecast — their proposed policy setting has apparently been determined by the actual data.

The market seems to be probing this contradiction and seeing just which side the Fed will ultimately come down on.

Note how 10-year US Treasury yields and inflation expectations plunged following last week’s meeting. This suggests a change in view that the Fed will be more aggressive in fighting inflation than investors previously thought. 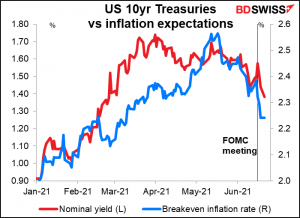 The move in the 30-year bond was even more extreme – the 5yr/30yr curve flattened by 26 bps over the last week, the biggest one-week flattening move in almost 10 years. Meanwhile the 3m/2yr curve steepened sharply as investors price in rate hikes over the next two years (and therefore higher 2-year yields). 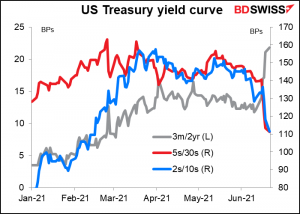 The concerns about higher rates have caused a distinct “risk-off” market. The S&P 500 was down 1.3% Friday and the sell-off is continuing today, with Japan’s TOPIX index down 2.5% and Hong Kong’s Hang Seng index down 2.7%.

In this risk-off environment, JPY was the best-performing currency. 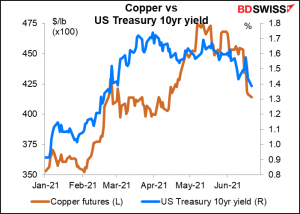 CAD was the biggest loser on the day despite a rally in oil prices caused by questions over Iran – the election of a hard-line president in Iran makes it less likely that the country will reach agreement on its nuclear program and the US will lift sanctions.

I have to admit I’m at a loss to explain why the market is picking on CAD. I would’ve expected the contrary. The Bank of Canada has already started tapering its bond purchases and has predicted that it will start raising rates “sometime in the second half of 2022.” I can only surmise that the Bank of Canada’s actions are fully priced into the market now, with the result that there’s little possibility of a hawkish surprise. 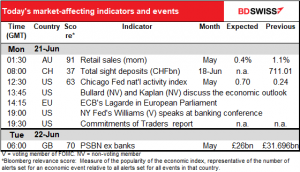 Not much on the schedule today. Friday’s usual Commitments of Traders report was delayed and will be released this evening.

Here’s the usual graph of Swiss sight deposits. The Swiss National Bank has been refraining from intervening as EUR/CHF is moving in the right direction. Interestingly though it intervened more a few weeks ago when the pair was marginally higher. It’s hard to draw any “lines in the sand” from this information. 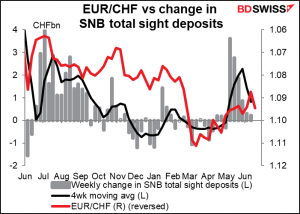 After that we just wait for comments from the speakers to hit the wires.

The most important one is the European Parliament’s Committee on Economic and Monetary Affairs (ECON Committee) will have an exchange of views with European Central Bank (ECB) President Lagarde for the second time this year. They will discuss three topics: 1) the effects of the negative interest rate policy, 2) spillovers from US fiscal and monetary policies, and 3) the review of the ECB’s monetary policy strategy and its forthcoming outcome.

Tomorrow morning, Britain announces its public sector borrowing, i.e. the national debt. Naturally this is quite seasonal, so it’s better to look at the 12-month moving average, which is coming down gradually. I don’t think this is particularly market-moving though. It might be if it were still going up, but I think with the worst of the pandemic over in most advanced countries, debt levels are coming down everywhere. 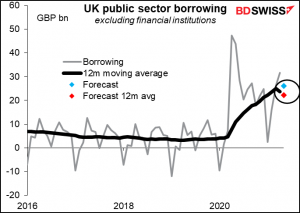 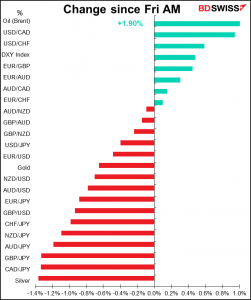