JPY Up, GBP Down on Virus Cases; Japan Unemployment

Not much happening in the FX market!

GBP’s bad performance is being blamed on the rising virus count. It is indeed bad in itself… 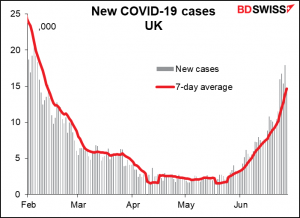 …and even more so when compared to other major countries. But I’m not sure it’s just that. I think this is probably more of a technical move. That is, people make money by pushing a currency one way or another. If they can’t make money buying GBP – as was the case over 1.42 – then they’ll see if they can make money selling it. 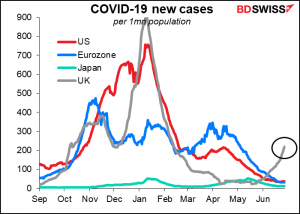 Personally I think this is the natural course for GBP. With the reality of Brexit now starting to kick in, it’s only natural that GBP should be weakening, IMHO.

Oddly enough, higher virus cases are also being cited as the reason why JPY strengthened. Japan PM Suga mentioned rising cases as a problem with the Olympics only three weeks away. Cases aren’t rising very much, but they’re not falling either, which is a concern.

Rising cases would strengthen JPY by increasing risk aversion among Japanese investors, which usually triggers currency hedging of their huge piles of foreign assets in order to lock in profits in case their domestic assets start to turn south. 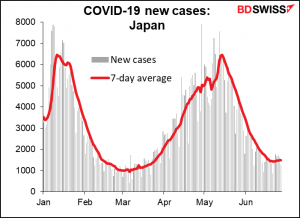 Speculators generally bought dollars – or more accurately reduced their long currency positions — following the Fed’s June meeting. Most of the change was in EUR, where speculators cut their long positions by around one-quarter. They also reduced long GBP positions and increased short JPY.

On the other hand, they increased long CHF and cut short AUD positions a bit. 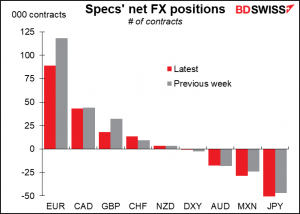 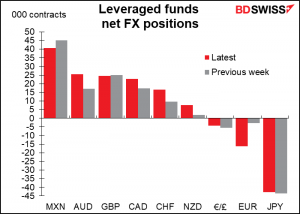 Speculators trimmed both their long gold and long silver positions. 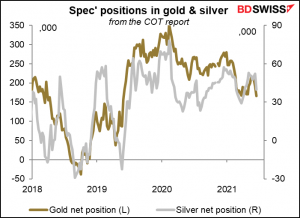 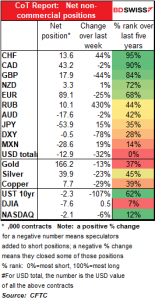 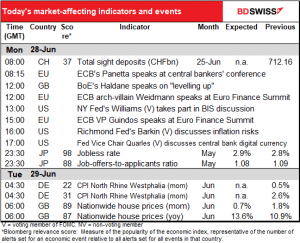 Not much on the schedule today!

At least we have the weekly Swiss sight deposits to discuss every Monday. It looks like the Swiss National Bank was intervening to keep EUR/CHF from falling much below 1.09. 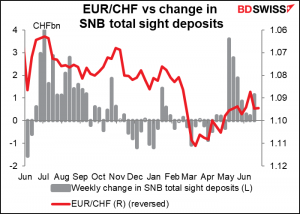 After that we just have a bunch of speeches. The annual Euro Finance Summit in Frankfurt will have a number of distinguished speakers, including Bundesbank President and über-hawk Jens Weidmann. I’ll also be interested in hearing what Fed Vice Chair for Supervision Quarles has to say about central bank digital currencies (CBDC). Usually Gov. Brainard discusses this issue. One of the big questions is how to design CBDCs so that they don’t disintermediate and destroy the banking system, so it’ll be interesting to hear what the guy in charge of banking supervision has to say on the matter.

Then overnight, Japan releases its employment data. The unemployment rate is expected to rise and the job-offers-to-applicants-ratio to fall. 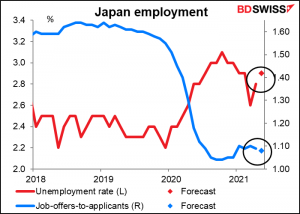 This isn’t great. Most (although certainly not all) countries have falling unemployment rates by now. 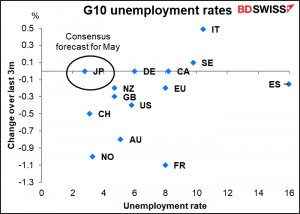 Then tomorrow we get the German consumer price index (CPI). The German lander, or states, release their CPIs first, then the national CPI is released. Until now I thought Saxony was the first to release its data, however I just noticed for the first time that North Rhine Westphalia (NRW) is released at the ungodly hour of 6:30 AM Germany time, 1 ½ hours before Saxony, which is why I’m including this in the Monday comment. (NRW moved up its release time in June of 2020 but I never noticed before! My mistake.)

This is an improvement, because NRW’s CPI has a much better correlation to the national CPI than Saxony does, on both a month-on-month and year-on-year basis. (Bavaria is a little better, but I’m not sure the difference is significant.) (The T-statistic is a statistical measure that indicates the significance of that factor in determining something else, in this case the national harmonized CPI. The higher the figure, the greater the significance. A T-stat below 2, like Saxony’s, suggests that the variable is not statistically significant.) 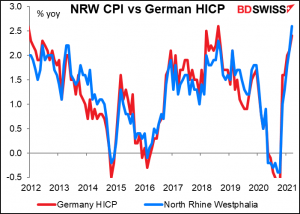 There’s also a pretty good (90%) correlation between the rate of month-on-month changes. 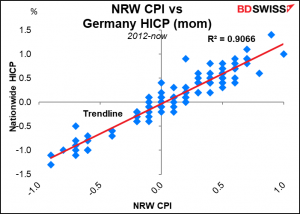 Then in the early early morning UK time, the Nationwide Building Society releases its house price index. House purchases have been soaring and so have prices as the government temporarily cut the stamp duty on house purchases. This tax holiday is now being phased out, so the rise in prices may begin to moderate from July. 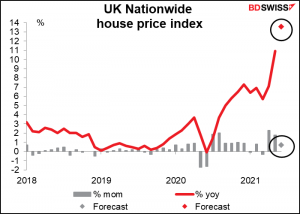 Last word on this subject: I’ve been going on and on about the

Last word on this subject:  I’ve been going on and on about the US government’s report on UFOs. It did indeed come out as expected on Friday, and it said exactly what the New York Times said it would say: we don’t know what these things are. 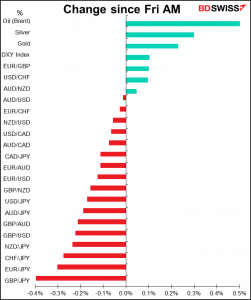