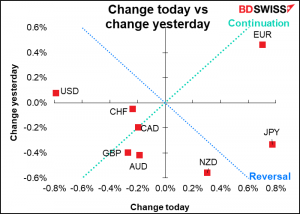 The yen is in the headlines again today but for the opposite reason from recently – it surged, initially due to yet another round of bond purchases by the Bank of Japan, this time including longer-dated debt. The yield on the benchmark 10-year bond fell to 0.23%, giving it some breathing room below its 0.25% cap.

The BoJ Monday announced that it would buy bonds Monday, Tuesday, Wednesday, and Thursday of this week, an unprecedented sequence (although one that was initially raised a year ago, when the Bank said it would “introduce “fixed-rate purchase operations for consecutive days” as a powerful tool to set an upper limit on interest rates when necessary.” 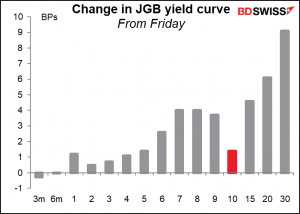 There were other explanations for the move as well – heavy selling of USD/JPY (buying of JPY) into the morning fixing, probably related fiscal year-end activity (their fiscal year ends tomorrow). There may also have been some cautionary selling after BoJ Gov. Kuroda met with PM Kishida, even though Gov. Kuroda said the PM made no particular request on monetary or currency policy.

From my point of view, I don’t see why lower bond yields should be positive for the yen – on the contrary, it shows the BoJ’s determination to let their monetary policy diverge from what’s going on in the rest of the world.

I think then that one major reason for the yen’s surge had nothing to do with Japan but rather the big rally in bond prices (fall in yields) elsewhere overnight, especially the US.

The rally in bonds came as hopes for peace in Ukraine increased tremendously.. Russia said it would “dramatically reduce hostilities” around the capital Kyiv. US officials confirmed that they have seen Russia beginning to withdraw some forces from around the city in what the US called a “major” strategy shift (aka retreat). In the US view, this is not a short-term adjustment to regroup but rather a longer-term move as Russia comes to grips with its failure to advance in the north. Meanwhile, Russia’s chief negotiator said that Ukraine’s proposals would be passed onto Putin for a response, while the Ukrainian side said that the agreement offered would see both sides “resolve issues linked to Crimea and the city of Sevastopol through bilateral negotiations.”

While this is so far just talk – there’s not even a cease-fire yet – markets took hope from the news and reduced the likelihood of further escalation. Of course this could just be a tactical feint from Russia to fall back, regroup, rearm, and attack again. But the market feels there’s a possibility that it’s real.

With talk of hostilities ending, inflationary fears receded, because it’s assumed that commodity prices, particularly oil, will come down.

Note though that European bond yields moved higher. German two-year yields for example went positive for the first time since 2014. 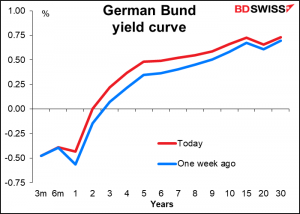 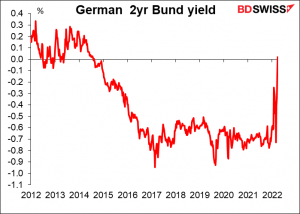 Why would European yields move higher if inflationary fears are receding? Because fears of a recession in Europe are receding too, and with that the European Central Bank (ECB) can get to work hiking rates to tame inflation.  You can see how the market has brought forward expectations of ECB rate tightening. This is what supported the euro yesterday. 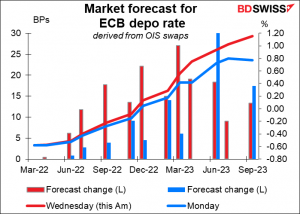 With all this speculation about peace, oil was quite volatile – Brent (red line) was up $5.43 or 5% to $114.83 at one point, then crashed to $10 to $104.84, and has since recovered to $112.03 or up 2.4% from Monday’s close. Apparently either the market doesn’t entirely believe the talk of peace, or perhaps thinks that the embargo – or self-embargo — on Russian oil could outlast hostilities. While there are signs that Russian oil is simply being diverted away from Europe and toward Russian buyers, there have also been reports of a decline in Russian production. And with the major oil companies pulling out of Russia, the country’s production long-term may suffer because of a shortage of spare parts and access to technology.

Quote of the day, from Interfax, an independent Russian news agency:  “The global situation will significantly brighten up when the current serious stage in the history of international relations is over, Russian Foreign Minister Sergei Lavrov said.” You betcha! 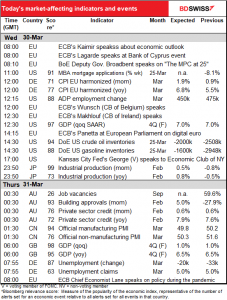 The European day begins with several speakers, including European Central Bank (ECB) President Lagarde speaking at a Bank of Cyprus event. Last week she said that “so far, incoming data don’t point to a material risk of stagflation.” We hope to hear more from her on this theme and how the ECB might react if the picture starts to change.

The US Mortgage Bankers’ Association mortgage purchase index is still above trend but starting to turn down. Is the US housing market starting to weaken as interest rates rise? 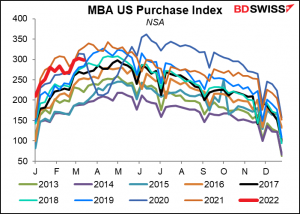 The German consumer price index (CPI) is expected to soar. Most of it’s energy – there’s no forecast for the core harmonized CPI (that is, excluding food and energy), but in February it was 3.0%, or 2.5 percentage points below the headline figure. That’s still high but not as outrageous as the headline figure. 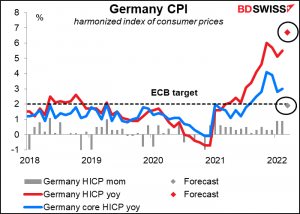 The forecast rise of 1.9% mom is kind of terrifying. That works out to 15.8% on a three-month annualized basis, up from 8.5% in February. Inflation in the Eurozone is surging! 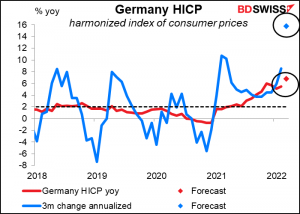 Oddly enough, this indicator – which I would think would be a biggie for EUR/USD – doesn’t have that much of an impact on EUR/USD. I looked at both the mom figure for the domestic version of the CPI, which is the one that has the highest Bloomberg relevance score, and also the yoy rate for the harmonized index of consumer prices (HICP), which is the one that’s germaine for EU-wide inflation. Neither seems to have that good a correlation with the subsequent movement in EUR/USD. That may be though because there’s only one year’s worth of data and during most of that year there was little chance of the ECB changing policy anyway. We’ll keep collecting data and see how it goes. 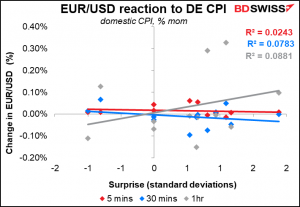 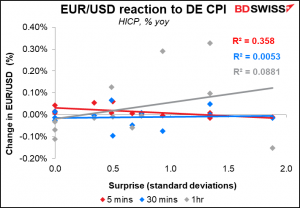 Next up is the Big Event of the day: the ADP employment report. Automated Data Processing Inc. (ADP) is an outsourcing company that handles about one-fifth of the private payrolls in the US, so its client base is a pretty sizeable sample of the US labor market as a whole. It’s therefore watched closely to get an idea of what Friday’s US nonfarm payrolls (NFP) figure might be.

One point to note:  the ADP adjusts its figures to match the final estimate of the NFP’s reading on private payrolls. It is therefore two steps removed from the headline figure that everyone focuses on, which is the initial figure for total payrolls, including government workers. So while it’s one of the few guides to the NFP that we have, it’s not perfect by any means – in fact, neither is the NFP figure itself, since it’s always revised.

Be that as it may, the market is looking for a pretty solid ADP report of 450k jobs. That’s quite similar to the 490k that people are looking for for Friday’s NFP. 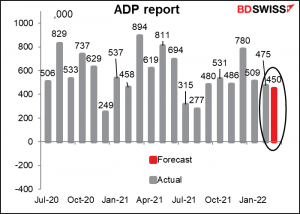 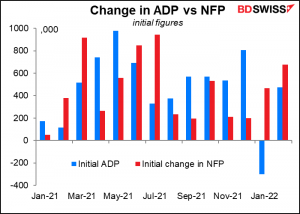 Investors interested in taking a position ahead of (or shortly after) this indicator should consider using USD/JPY rather than EUR/USD, as USD/JPY seems to react more in line with the results of the report. (AUD/JPY also reacts well too, I find.) 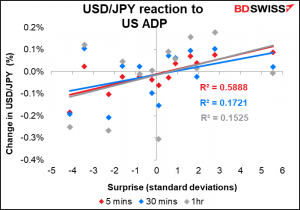 Overnight we get Japan’s industrial production. It’s expected to be up only slightly after two small down months. Export volumes rose 1.5% mom during the month and auto production, which fell

sharply in January, looks to have rebounded. 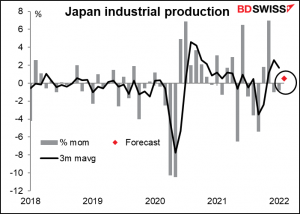 Still, the recovery remains painfully slow as the economy is still held back by the lingering impact of the COVID-19 emergency measures as well as geopolitical risk and supply chain constraints. According to the New York Fed’s global supply chain barometer, the pressures on Japan’s supply chain just peaked in January. 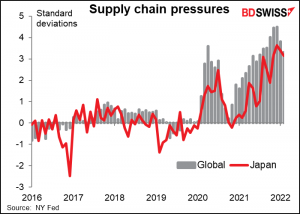 Although industrial production has the highest Bloomberg relevance score of any Japanese indicator, its impact on the currency seems to be hit-or-miss at best. 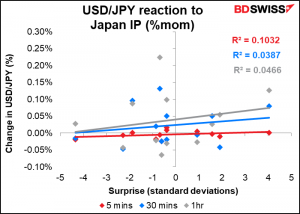 Then a couple of big Australian indicators: building approvals and private sector credit.

Building approvals are expected to recover after the previous month’s plunge. That surprising drop probably resulted from COVID-19 disruptions around the start of the year, which the seasonal adjustment then amplified. This month will no doubt be higher but probably not a full recovery back to December’s level, which would necessitate almost a 40% mom increase. 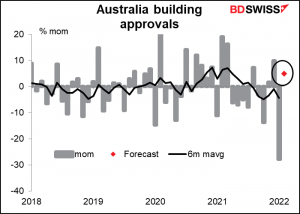 Private sector credit is expected to be up about the same as it was in the previous month on a mom basis. The yoy rate of change bottomed out in March last year and has been climbing steadily. 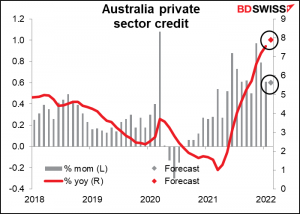 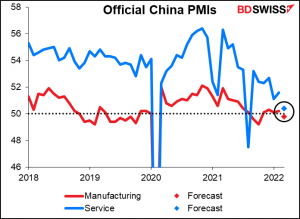 In the early hours of the European day Thursday the final revision of UK 4Q GDP should be a non-event.

Not coincidentally, EU-wide unemployment too is also at a record low. However the European Central Bank doesn’t have a “dual mandate” so even record-low unemployment doesn’t have that much in the way of policy implications. 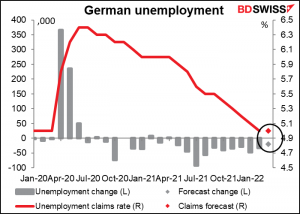 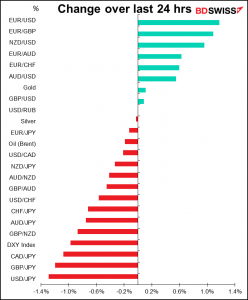