JPY Up on Risk Aversion, GBP Down w. no New News; BoJ Meeting 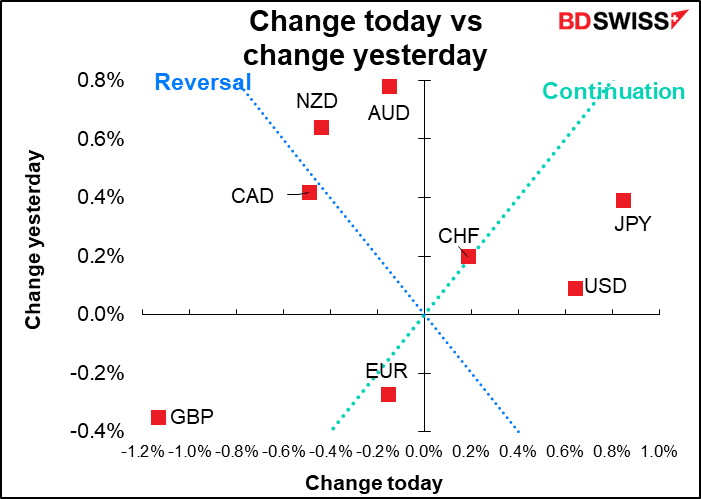 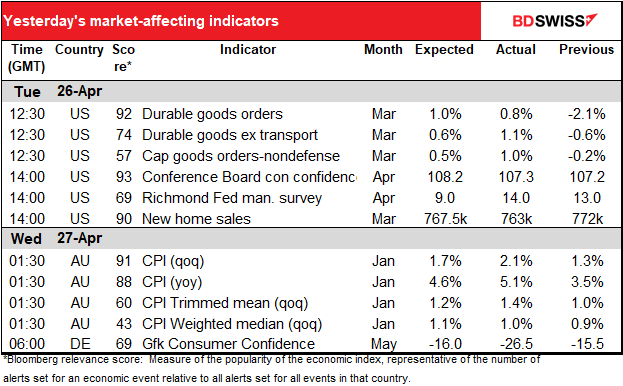 Stock markets continue to lead as Monday’s bounce proved short-lived. There wasn’t necessarily any particular trigger for yesterday’s sell-off, just the entire panoply of risks: the war in Ukraine coupled with the COVID-19 lockdown in China, which will only exacerbate the extraordinarily high inflation and force central banks to tighten so far as to cause a recession.

Some commentators even blamed a research report from Deutsche Bank that argued there will be a recession by the end of 2023. DB is the first major investment bank to forecast a recession. Others (as well as the Fed) expect the fabled “soft landing,” i.e. a smooth transition into a period of slower growth and lower inflation. Their view: the Fed is behind the curve in a manner unseen in a generation, inflation is going to prove a lot stickier than expected, the Fed will have to raise rates to 5%-6%, and monetary tightening will push the US economy into a significant recession, with unemployment ultimately rising several percentage points.

So far the market disagrees, but these forecasts only go out for the next 12 months. Who knows what will happen by December 2023? 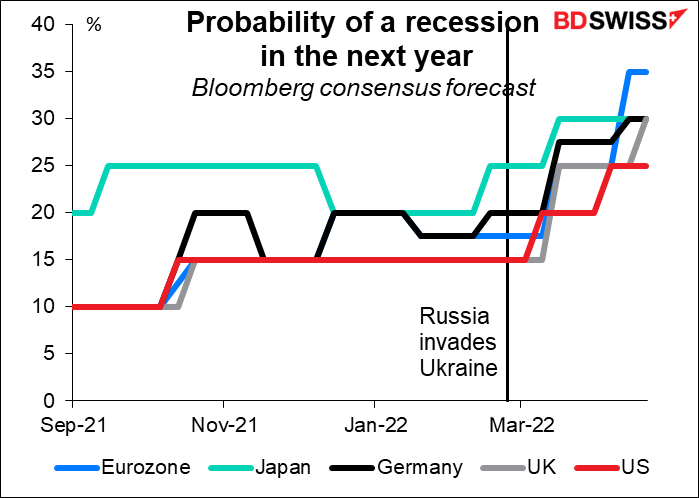 The market sees the Fed starting to cut rates at the end of 2024 so presumably investors think either inflation will be under control by then or there’s going to be a recession. In any case, DB’s forecast of a fed funds rate at 5%-6% is wildly out of line with the market. Not impossible by any means, just not what the market is currently forecasting. 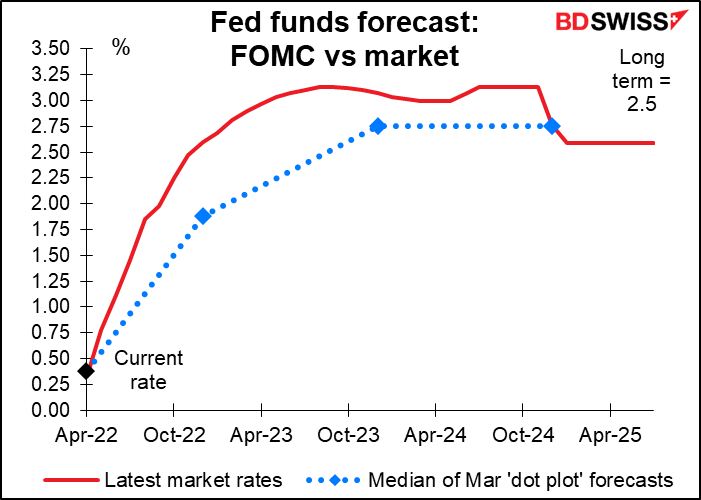 The Deutsche Bank argument has history on its side. Previously when inflation was at these levels, the lowest the fed funds rate was was 6.5% and it went all the way to 15%. It would be more surprising if it stopped at 3.14% as the fed funds market is predicting, unless of course inflation comes down naturally of its own accord, which is possible. 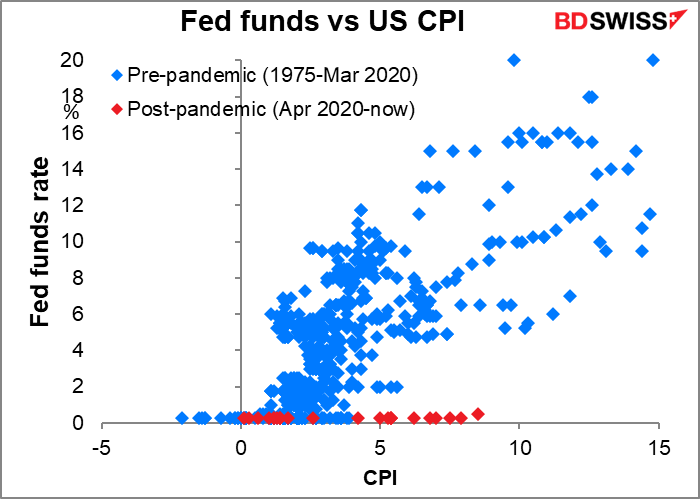 The big mystery of the day was why GBP was down so much. GBP/USD fell through the psychological support level of 1.30 on Friday after the disappointing UK retail sales figures (headline figure: -1.4% mom vs -0.3% mom expected) and basically hasn’t stopped falling since then. There was no particular news yesterday to precipitate a further decline.

Elsewhere, ECB Governing Council Member Kazaks, Latvia’s central bank governor, said that the ECB has room for 2 or 3 hikes this year and “a rate rise in July is possible and reasonable.” Mr. Kazaks has been in the news recently; a week ago he said a hike in July was possible, only his “2 or 3” comment yesterday was new. But that didn’t stop the euro from declining as Russia warned Poland and Bulgaria that it would cut off gas supplies on Wednesday. Who’s next? German economics minister Habeck said that it hopes to find a way within days to replace Russian oil with supplies from other sources and as a result an embargo on Russian oil would be “manageable.”

The threat of Russia cutting off energy supplies to European countries pushed oil prices higher even though the American Petroleum Institute (API) announced a surprise increase in inventories of 4.8mn barrels during the latest week. The forecast for today’s US Dept of Energy estimate is zero – no increase, no decrease. The two series often vary week-to-week but over the long term the differences generally even out. 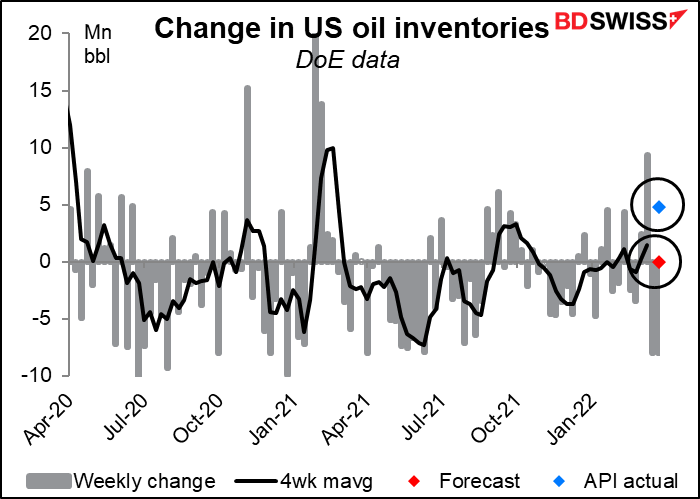 Meanwhile though the oil market is looking a lot calmer than it was just a few weeks ago. The prompt time spread, the premium that traders are willing to pay to get oil now instead of a month later, has almost disappeared. 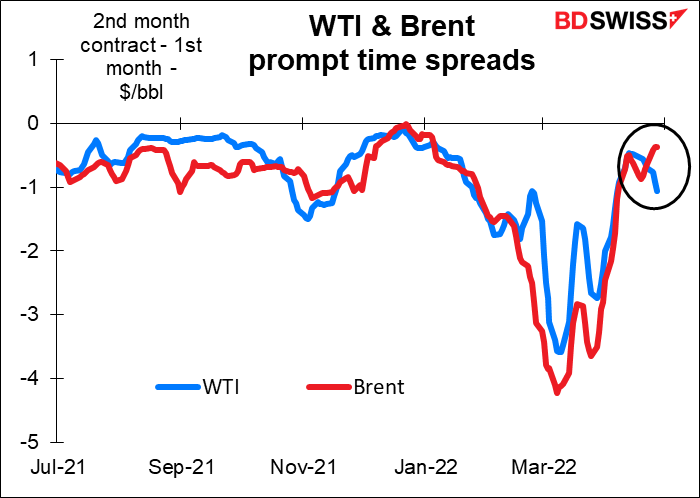 Prices remain higher than they were before the invasion (grey line), but the prices for oil to be delivered in the next month or two are lower than it was a month ago, indicating that the initial panic has subsided. 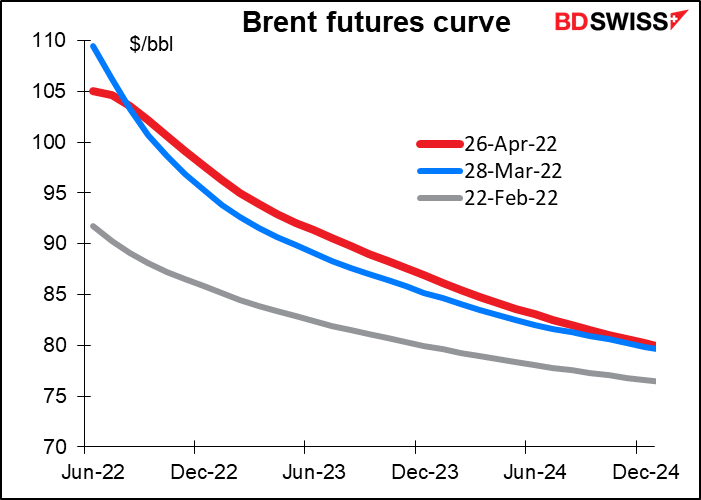 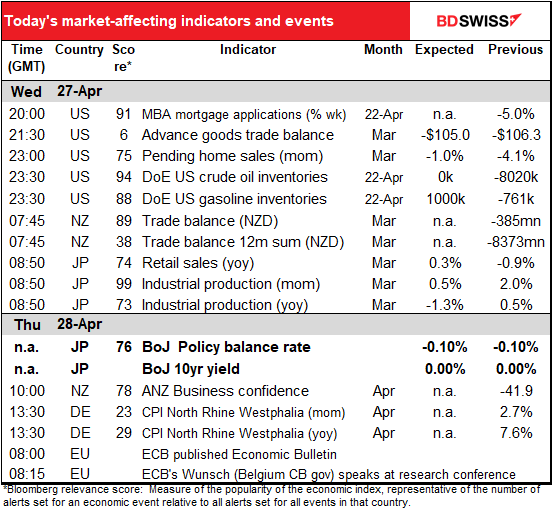 The big event over the next 24 hours is the Bank of Japan (BoJ) Policy Board meeting, and even that isn’t likely to be too big of an event for the markets. As usual, I wrote about this in more detail than anyone would want in my Weekly Outlook, which you are welcome to peruse at your leisure. To sum up what I said there:

Net net, I expect the meeting will be a disappointment to those who are looking for the Bank of Japan to call a halt to the yen’s decline and the currency could weaken further after the meeting.

That’s been the historical pattern. Over the last six meetings, USD/JPY has moved higher the following week five times. Of course past performance is no guarantee of future performance, as we all know. 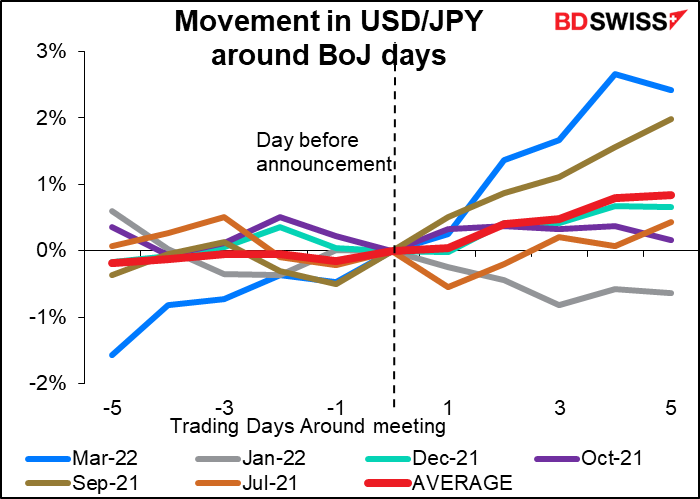 As for the day’s indicators…

US mortgage applications as reported by the Mortgage Bankers’ Association (MBA) have leveled out a bit earlier than is usual, looking at the seasonally unadjusted levels. That suggests perhaps some weakness to come in the US housing market. 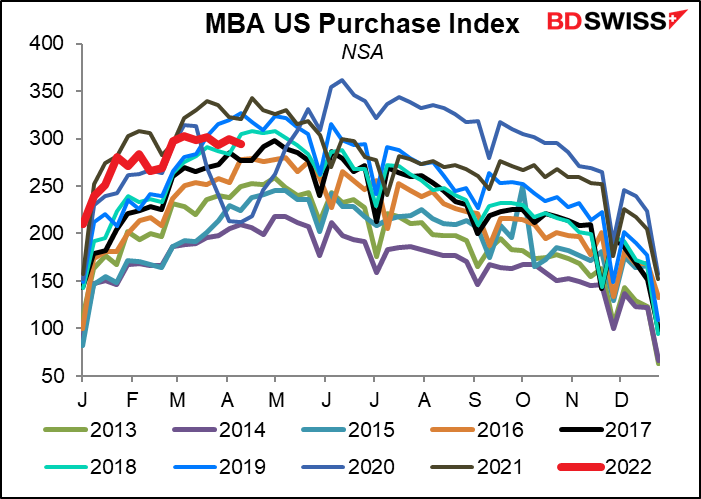 The US advance trade figures don’t seem to hold much importance for the markets, as shown by the extraordinarily low Bloomberg relevance score. I follow them nonetheless. The trade deficit bottomed (I say “bottomed” because it’s a negative number; some people might think “peaked”) in January at a record $107.36bn. It then narrowed a bit in February and is expected to narrow further in March. 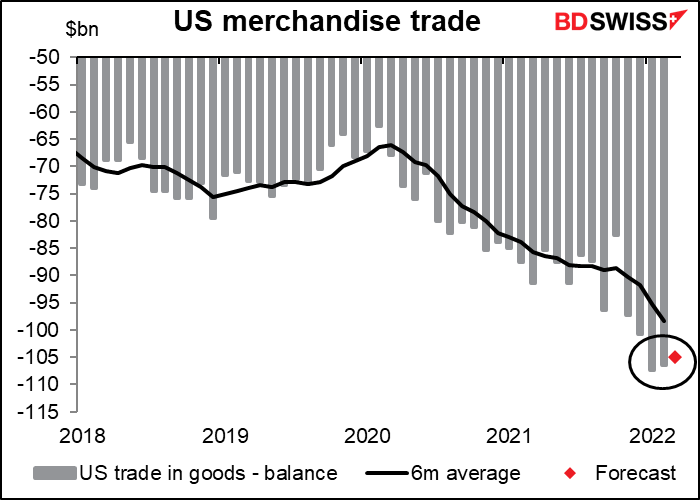 I suppose people are last month’s pattern to repeat – exports were up 1.8% mom while imports were up only 0.6%. It may be that US energy exports are increasing as the US steps in to fill the breach left by boycotts of Russian oil. That could help the US trade balance and thereby support the dollar, although I’m not sure how much attention the FX market pays to trade data nowadays. 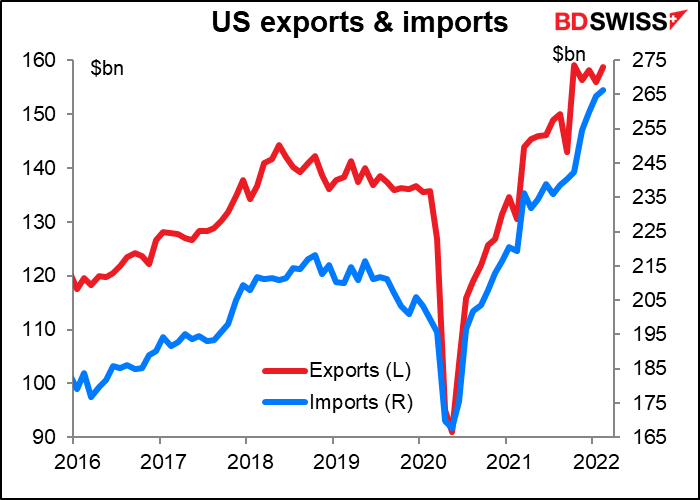 Overnight, New Zealand releases its trade data. There are no forecasts for this indicator any more, but I still think it’s important to follow it since the commodity currencies depend on exports of their commodities. The figures aren’t seasonally adjusted so the 12m moving average is probably more important than the month-to-month data. So far the picture isn’t that great for New Zealand. 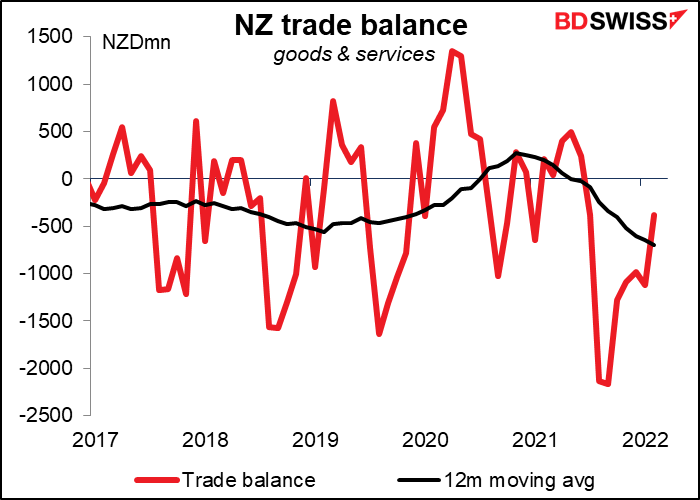 Imports have started to turn up again. 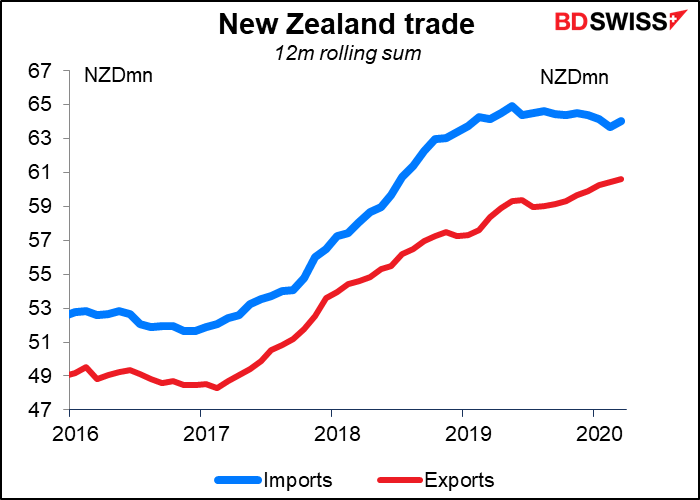 Next up are two indicators from Japan – retail sales and industrial production. These come only a few hours before the Bank of Japan meeting, but since the Bank of Japan rarely does anything market-affecting, the market may still react to the indicators, at least as much as it ever does.

Retail sales are expected to be up a healthy 1% mom after three consecutive months of decline. 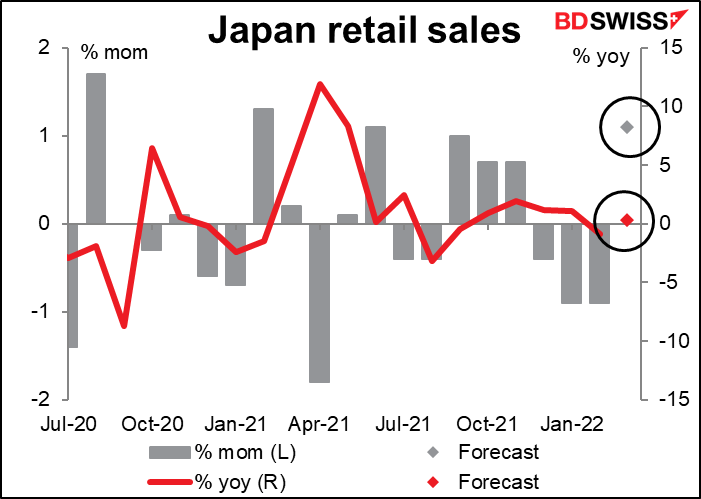 Industrial production is expected to be up only slightly on a mom basis. On the one hand, export volumes were up 1.8% mom and domestic shipments also rose after the COVID-19 measures were lifted during the month. On the other hand, production was likely hurt by the earthquake in the Tohoku region on March 16th. 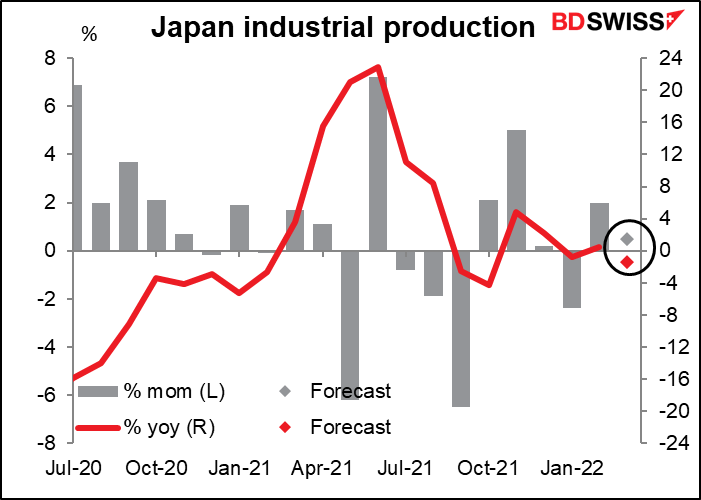 Although industrial production has the highest Bloomberg relevance score of any Japanese indicator, the FX market’s reaction to the indicator isn’t particularly close. 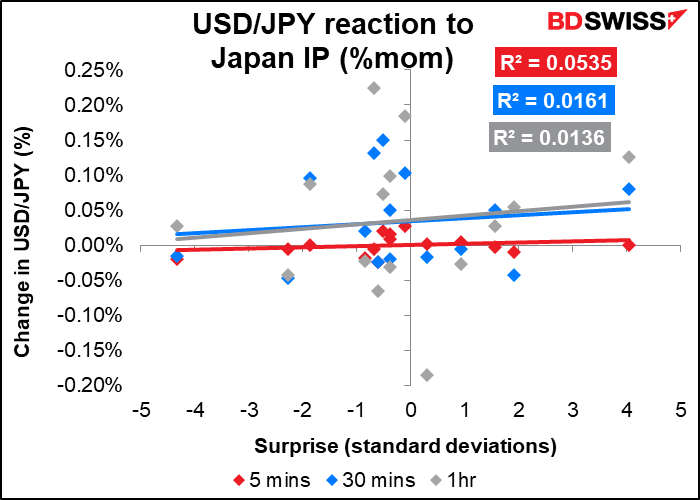 We now come to the Bank of Japan meeting, which I’ve already dealt with first thing.

Then ridiculously early in the European morning (6:30 AM local time), the German state of North Rhine Westphalia releases its consumer price index (CPI). There’s no forecast for it. As NRW is the largest of Germany’s 16 landers or states, its CPI has a pretty good correlation with the national CPI, which will be released later. The mom changes are on average almost exactly the same, although there is variation each month. 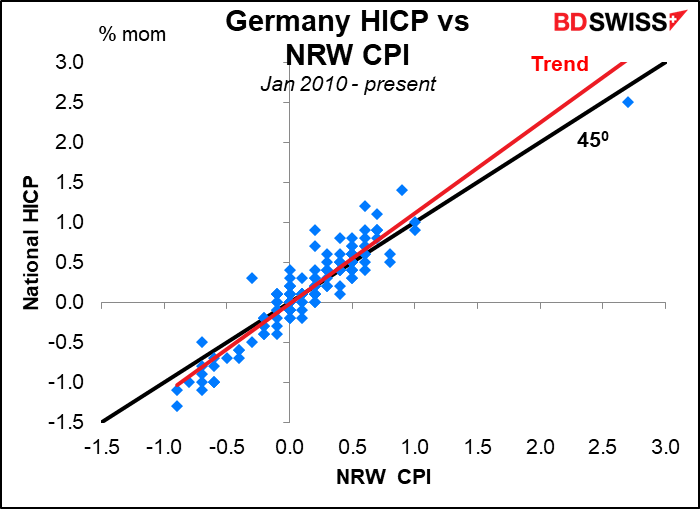 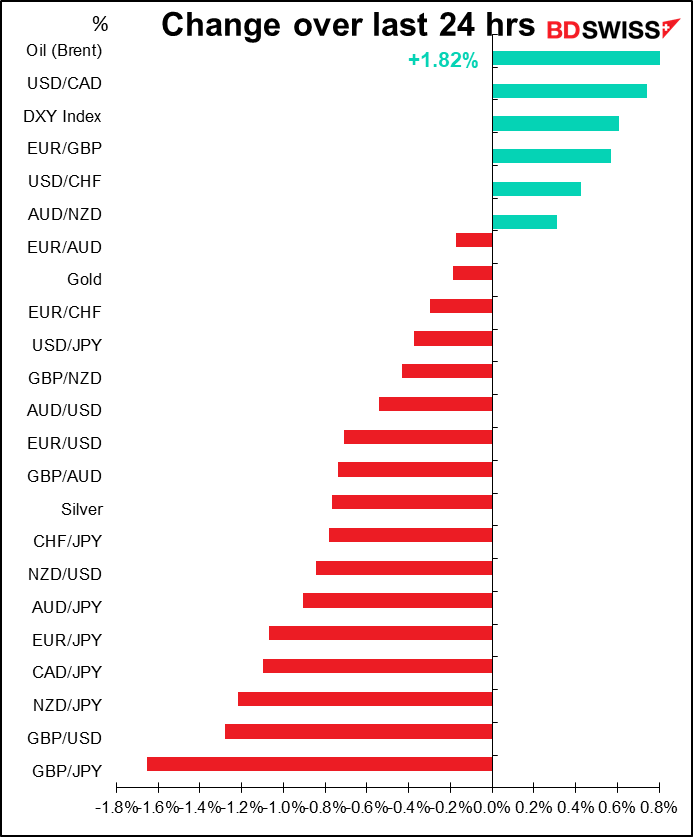