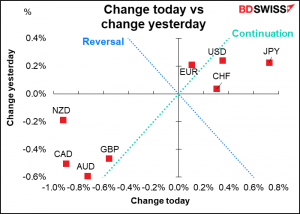 My weekly comment last week was entitled, “Back to Normal.” The idea was that we had had a day when the markets were in a tizzy worried about the new delta variant of the virus, but that things had calmed down and were getting back to normal.

Boy was I wrong!

Yesterday’s movement can be summed up with the following graph. Peloton Interactive Inc. (red line) makes home gym equipment. Planet Fitness Inc. (blue line) is a gym chain. Same business – fitness – but one is for home use, the other is a public space. The former up 6.5% yesterday, the latter down 5.7%.

The story is the same as I discussed yesterday: fears that the delta variant is going to send the world back into lockdown. The “vaccine euphoria,” the hopes that the vaccine would end the pandemic and we’d soon be back to normal, is fading. On the contrary, a return to normal could be much further away than people had thought, especially if the problem continues into the winter, when people in the northern hemisphere spend more time inside and the virus has more chances to spread.

One symbol of the problem: Apple yesterday decided to push back its return to office deadline by at least a month to October at the earliest. The company had decided just last month to start bringing people back to offices in early September. Other companies could follow suit as the virus reemerges everywhere.

Stocks were lower across the board. 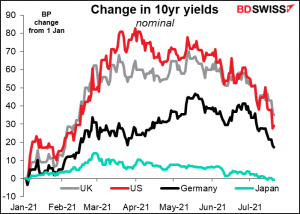 And yield curves flattened, a sign that investors see either lower economic activity or lower inflation in the future than they did before. 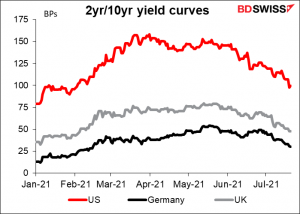 Commodity prices were generally lower as a result. 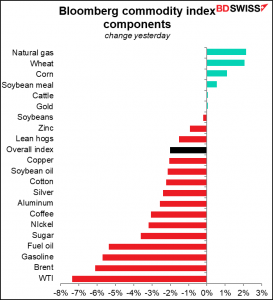 I feel particularly bad that the energy complex had such a bad day immediately after I said that the OPEC agreement would be positive for oil. It’s hard to disentangle the effect of the agreement from the effects of the commodity sell-off overall, though. I think it was more the idea that mobility will be hampered once again, less overseas travel, less commuting to work etc. rather than the OPEC agreement.

One reason I think the fall in oil was due to the pandemic, not the OPEC agreement: near prices fell more than far prices. Since the supply doesn’t change so much in the near future, that suggests people are more concerned about the prospects for near-term demand than for the supply/demand balance in the distant future. If people thought that the OPEC agreement was going to flood the market over time, then far prices would’ve fallen more than near prices. I think. 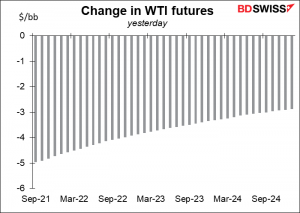 Naturally in this environment, the safe-haven JPY, CHF, and USD dominated while the commodity currencies suffered. NZD was hardest hit probably because they’re the currency that is expected to normalize policy first. If things go the way they are however the Reserve Bank of New Zealand (RBNZ) probably won’t be able to normalize policy on schedule. As a result, the market is pushing back its expectations for the RBNZ’s official cash rate. 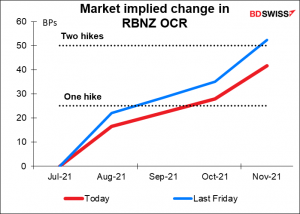 What will happen? I have to say, I don’t know. The rule in recent months – years, actually – has been simple: buy the dip. There have been many scares before but they’ve either turned out to be not as bad as people thought and/or the authorities have ridden to the rescue. This time though what more can they do? I’m not sure. It’s hard to see central banks loosening policy further and it’s hard to see governments coming up with more stimulus packages. And it’s hard to see people staying locked in their homes anymore. My feeling: we will go with the Swedish model. Governments will avoid shutting down and economies will remain open, while hospitalizations will rise too. I can’t see any other way at this point. That to me means risk appetite is likely to recover. Indeed European stocks are opening higher today, so perhaps the BTD (buy the dip) crowd is out already. 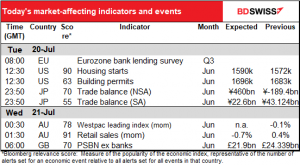 Another quiet day in indicatorland.

The day starts out with an indicator you’ve probably never paid much attention to: the European Central Bank (ECB) quarterly Euro area bank lending survey. As it says on the ECB’s website:

The euro area bank lending survey (BLS) provides information on bank lending conditions in the euro area. It supplements existing statistics with information on the supply of and demand for loans to enterprises and households. The BLS provides input to the assessment of monetary and economic developments carried out by the ECB Governing Council in the process of making its monetary policy decisions.

Most of the major central banks do this kind of survey. In the US it’s called the Senior Loan Officer Opinion Survey on Bank Lending Practices. In the UK it’s the Credit Conditions Survey. Etc. 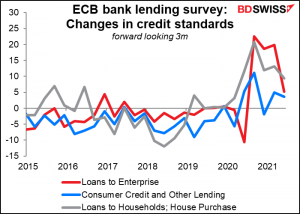 Or they ask whether there was more or less demand for loans. 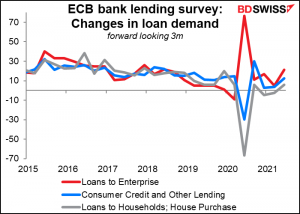 This indicator has never been particularly big, but with the revision to the ECB’s monetary policy strategy statement it may become more important. That’s because the new statement revised the ECB”s two “pillars:” the “monetary policy” pillar was changed to “the monetary and financial analysis” (the other one, “economic analysis,” was left unchanged). The “financial analysis” will focus on “the monetary transmission mechanism.” There will therefore be more discussion of bank lending and whether the ECB’s efforts at the wholesale level are making a difference at the retail level. This survey would be a natural place to look for such evidence.

US housing starts & building permits are both expected to be up by about 1% mom, indicating that the US housing boom continues. 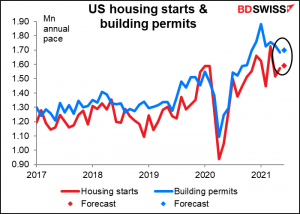 Then that’s it until Japan’s trade balance comes out tonight. The NSA figure is expected to rise, but the NSA figure is forecast to fall, probably due to rising oil prices and large-scale vaccine imports. The figures are also likely to show that the driving force behind the recovery in Japan’s exports is shifting from China to the US and Europe. 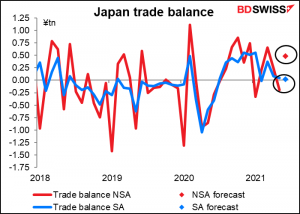 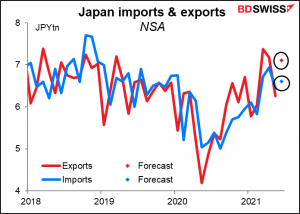 Australia’s retail sales are expected to be down by some 0.8% mom on a preliminary basis, but the figures are volatile and difficult to read because of the various lockdowns across the country during recent months. In any case this is still a decent figure that would leave sales 1.4% above pre-pandemic levels. 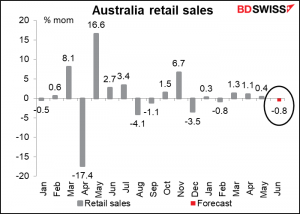 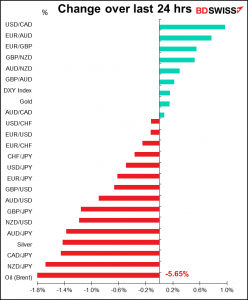