Near-Extreme Expectations from Fed Pull USD Up, Stocks Down

Expectations for further moves by the Fed have an increasing impact on markets, pushing the dollar up to extreme highs and pressuring stocks. 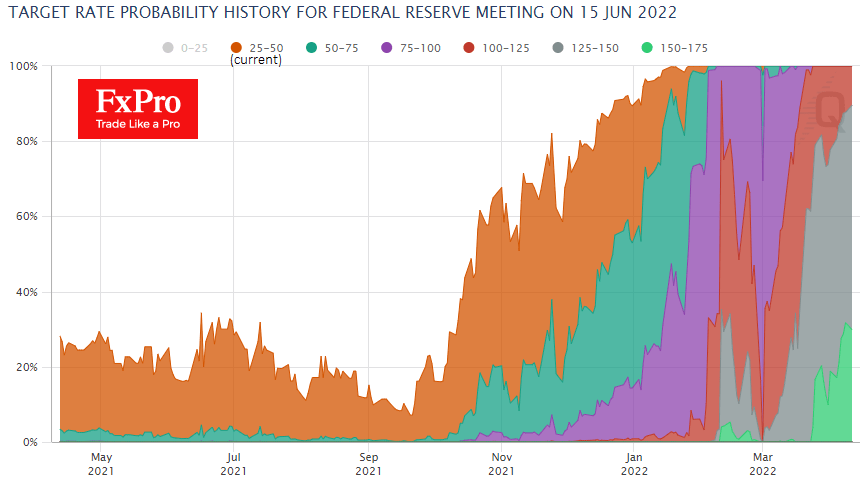 Futures are laying on an 84% chance of a 50-point rate hike in early May and a 92% chance of a 50 or more-point hike in mid-June, including a 37% chance of a 75-point tightening. These expectations are high but hardly sustainable.

Markets like to rush from one extreme to the other, and we think we are now close to going ridiculously far in their expectations. There is no chance that today’s US inflation data will surprise with a slowdown in inflation, but it could still mark a peak followed by a decline, albeit from very high levels.

However, it is unlikely that the Fed will follow such a scenario. The greater chance is that the American central bank would prefer to intervene at the short end of the curve by raising the Fed funds rate and all along the curve by regulating the sale of bonds from the balance sheet.

Such an approach would help contain the yield curve inversion that is so frightening to market watchers, in their eyes, foreshadowing a new recession.

However, markets need fundamental or verbal evidence to stop them from drifting in expectations. And with that in mind, the US inflation data coming out later today is worth investigating for signs of a slowdown in prices. For example, sectors such as the secondary car market or household goods, which have been pulling prices upwards, could now be contributing to the lowering of inflationary pressures.

The current shift in expectations towards an extreme tightening from the Fed may peak somewhat later on before triggering a significant sell-off in the markets and a strengthening impulse for the USD. The Dollar Index broke through the psychologically important 100 level, while EURUSD and GBPUSD are testing their psychologically essential levels of 1.08 and 1.30. Meanwhile, the Japanese yen continues to frighteningly lose value, and the Swiss franc is not attracting capital flows looking for safety.