Yesterday morning I suggested that after its big fall Tuesday, NZD/JPY might rebound on Wednesday. Boy did it ever! New Zealand 1Q unemployment beat estimates, with the number of jobs rising twice as fast as expected ( 0.6% qoq vs 0.3% expected) and the unemployment rate falling to 4.7% from 4.9%, vs expected unchanged figure. 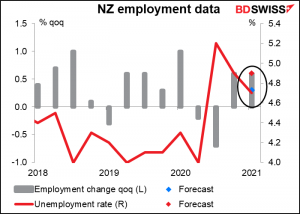 This with the participation rate rising to 70.4% from 70.2% (vs 70.3% expected).Total employment is now higher than it was before the pandemic. 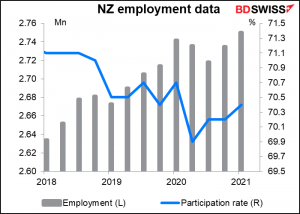 New Zealand has done the best among the G10 countries in terms of employment recovery. 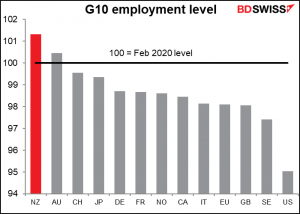 Other currency movements aren’t really worth talking about – just the financial equivalent of Brownian motion. EUR/USD fell through 1.20, staged a recovery, but couldn’t sustain the gains and is still below that level.

There seem to be some questions over the outlook for Europe despite the EU’s vaccination rate catching up with the US. For example, concerns are mounting about EU-China relations. The European Commission proposed new rules that would allow it to take action against foreign companies that benefit from “distortive subsidies granted by non-EU countries,” to bring foreign trade in line with the rules regarding EU governments subsidizing their companies. The proposed legislation, clearly aimed at China, comes after the European Commission Tuesday suspended efforts to ratify the EU-China investment agreement, due to EU sanctions against China and the Chinese counter-sanctions.

The difficulties in getting the investment deal sorted out is bad for Germany, which is perhaps the most dependent of any major country on global trade. (Although of course trade is not the same as investment.) Still, political tensions can easily spill over into the economic sphere. 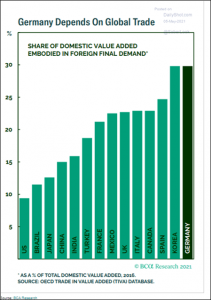 Stocks were equally boring, with the S&P 500 up 0.07% and the NASDAQ -0.37%, paltry movements by today’s standards. Pharmaceutical companies were hit by the news that the US wants to waive intellectual property protections on vaccines.

The market disagrees, however. Inflation expectations continued to rise, with the five-year breakeven inflation rate hitting the highest level since 2008 and the five year/five year forward breakeven inflation rate (the rate that the market thinks will prevail for five years starting five years from now) at 2.68%, which I would say qualifies as “sustainably” over the 2% target. 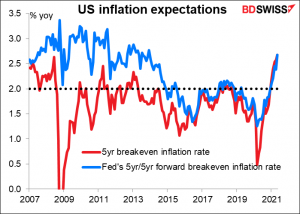 I think this fight between the Fed’s view and the market’s view is the defining issue facing investors nowadays. 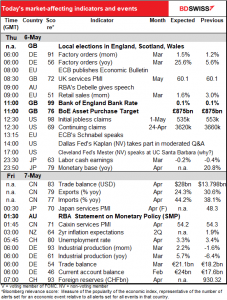 The focus today will be squarely on Britain. Two big events: the results of the Bank of England meeting, and the local elections in England, Wales and Scotland.

I not only dealt with these both in my Weekly Outlook, but I also wrote a special report on the Scottish elections, plus I a video on the elections and another one on the Bank of England meeting. And I wrote about them both yesterday anyway.

So, what’s there new to say today? I’ll just repeat my summary of what I expect from the Bank of England and add a couple of graphs about what GBP might do.

The improvement in the economy since the February Monetary Policy Review (MPR) is likely to result in a substantial upward revision to the forecasts in this month’s MPR. That could provide the justification for the MPC to follow the Bank of Canada’s footsteps and begin tapering its bond purchases. I expect the Committee to vote unanimously to keep Bank Rate and the total amount of bond purchase unchanged at GBP 895bn but to slow the weekly pace of bond-buying from its current GBP 4.4bn a week to around GBP 3.5bn or GBP 3.0bn. That would allow the Bank to complete its current QE program of GBP 150bn and reach its Asset Purchase Facility (APF) target of GBP 895bn by the end of 2021. Otherwise, they will hit the target around mid-October and either have to stop it then or decide to extend it at a time when the UK economy should be on the mend, according to their forecasts.

GBP tends not to be unusually volatile on days when they don’t make any decisions, but today may not be one of those days. 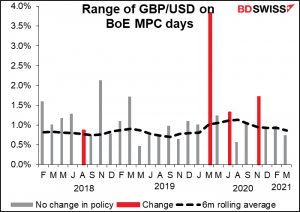 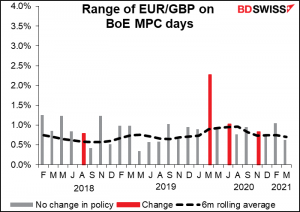 As I said previously, the Scottish local elections today are a long-term risk to the United Kingdom but not a short-term risk. If the pro-independence parties win a majority, which seems likely, that doesn’t mean Scotland would become independent tomorrow. There are several more hoops they would have to jump through, and some are quite narrow:

This may be why people are more focused on the Bank of England meeting than on the Scotland vote. The risk reversals show that the market hasn’t been pricing in any increased risk in GBP over the last week or so. 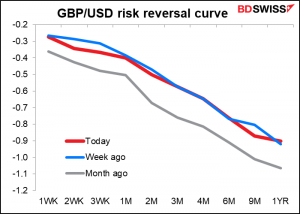 They won’t start to count the vote until tomorrow so it’s likely we won’t know the results until the weekend.

Getting back to the data, we discussed German factory orders yesterday. Besides, they’re out already. They were much better than expected at 3.0% mom vs 1.5% mom expected.

US initial jobless claims have fallen for three consecutive weeks and are expected to fall another week too. The expected decline of 18k would be in line with last week’s -13k and the -20k of the week before. This would continue the recent story of an improving US labor market and improve expectations about Friday’s nonfarm payrolls. 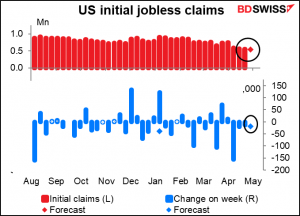 Then we wait for the Asian day for two indicators that no one cares about, Japan labor cash earnings and the monetary base.

I promised some time ago I wouldn’t comment on labor cash earnings, so I won’t. It’s one of those indicators that should be important for determining monetary policy but it isn’t, because Japanese monetary policy no longer responds to anything. 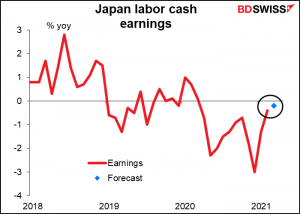 I happened to notice that the monetary base has a fairly high Bloomberg relevance index so I thought I’d see what’s going on. It just shows how they’ve taken off boosting the money supply since the pandemic started. That probably explains why JPY hasn’t appreciated that much. 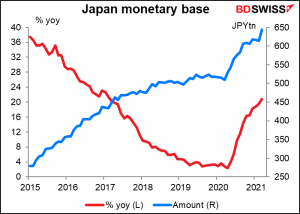 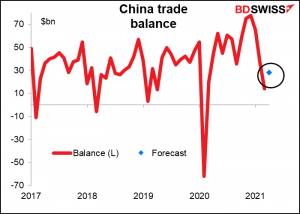 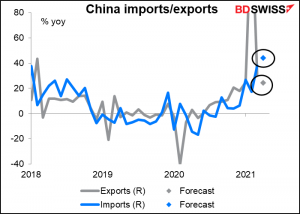 At Tuesday’s Reserve Bank of Australia (RBA) meeting, we learned that the RBA had upgraded its GDP forecast and cut its unemployment forecast. We’ll learn the details this morning, when the entire Statement on Monetary Policy (SMP) is published. Just for your handy reference, here’s the table from the February edition. As you can see though they include the previous forecast in the table, so there’s really no reason for me to be including this. 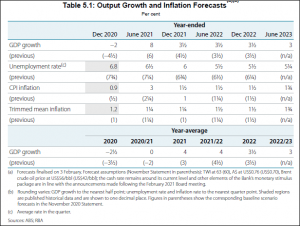 Then when the European day starts, we get German industrial production, as usual the day after factory orders. The market is looking for a healthy rebound after two months of decline. Given that IP collapsed 8.9% mom in March 2020, the yoy rate of growth is expected to blast off, but that’s only natural. Don’t be fooled. 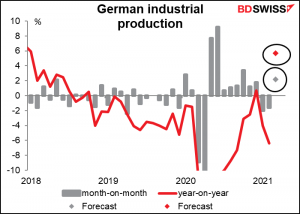 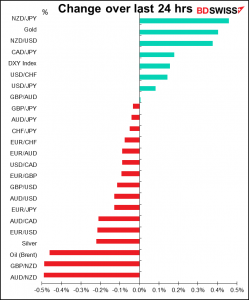