Oil Falls Out of Uptrend

Crude oil must balance between a strengthening dollar and stock market pressure on the one hand and the problematic energy supply situation on the world markets on the other. In our opinion, this delicate equilibrium has the potential to break in the coming days, and downside risks prevail in this case. 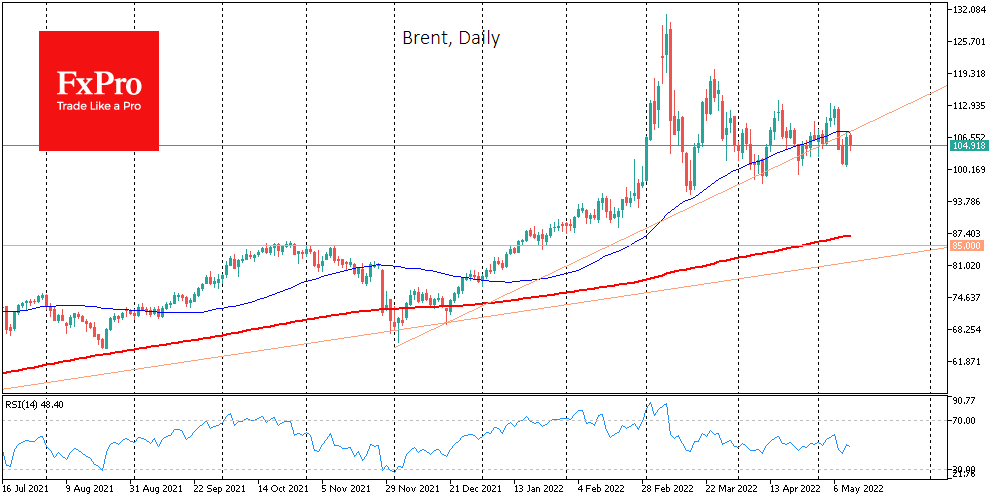 The dollar rally squeezes capital from other assets, from developed currencies and equities to cryptocurrencies. Crude oil, meanwhile, has been trading in a roughly 20% range for the past nine weeks, although historically, it has played out with great amplitude on lower demand for risky assets and traction in the dollar.

Last week’s increase in US commercial stocks outweighed the decline in the Strategic Petroleum Reserve. This trend could continue in the near term as demand growth has slowed recently.

Although US oil producers reduced production to 11.8m BPD from 11.9m BPD last week, they continue to ramp up drilling activity, which promises more oil in the second half of the year. This desire to postpone production “for tomorrow” is easily explained by Biden’s announcement that the government will top up reserves from August.

OPEC countries have also failed to keep up with the quota increases, meeting the deal at 162% of their allotted quotas and increasing the backlog of potentially permissible levels.

The price chart clearly shows that we are now seeing a desperate attempt to cling to former uptrend support and return to levels above the 50-day average. Locally, the bears are showing their strength by reversing the oil down from those levels on Thursday before the start of active trading in the US. This seller’s attack should largely be attributed to the dollar updating its highs against its main competitors and a full-blown risk-off in the markets.

However, having fallen out of the recent uptrend, the oil may never return to it in the foreseeable future.