Following Gold, the uptrend formed in early December is also breaking in oil. Intraday on Monday, the WTI price lost more than 6%, recovering about half of the decline on some return of risk appetite in the last couple of hours of the New York session. 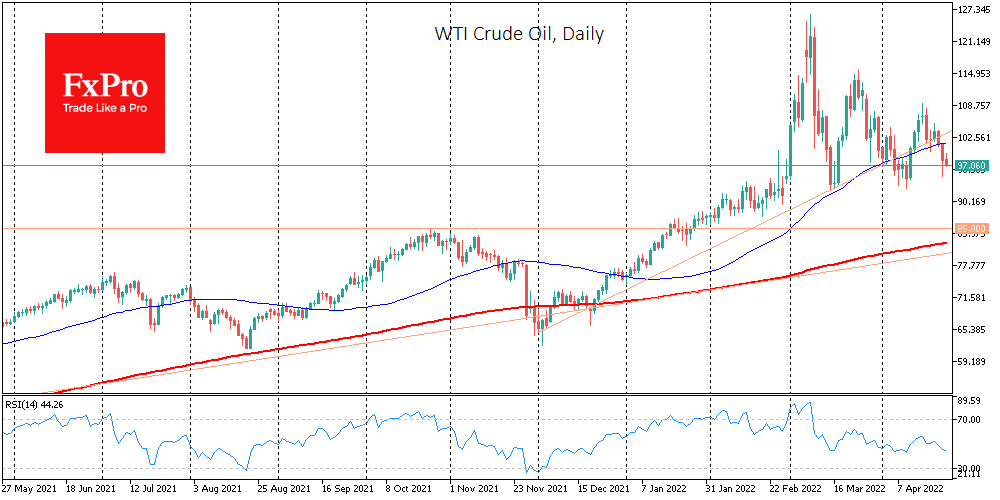 Nevertheless, as of Tuesday morning, sellers dominated the oil market. For the second time this month, the oil price is below the support line and under the 50-day moving average. At the beginning of April, the price returned to the upside.

A break of the upward trend will be confirmed in case of a break below $93.50, the area of the lows of March and the first half of April.

On the side of the bears is the slowdown of economic growth in China, the threat of a fall in consumption due to the expanding lockdowns, and the risk that Beijing may also soon be closed.

If the oil gets fixed under 93.50, like in the case of Gold before, we might see a relatively quick surrender of the bull speculators, which would take the price back to $82.50-85.0, which is the area of October picks and the 200-day moving average.

Falling below $80 for the foreseeable future would represent a break in the uptrend originating from the area of pandemic lows. Such a scenario is possible in a sharp increase in turbulence in the financial markets, possibly due to a sharp tightening of monetary policy by the world’s biggest central banks, led by the Fed.