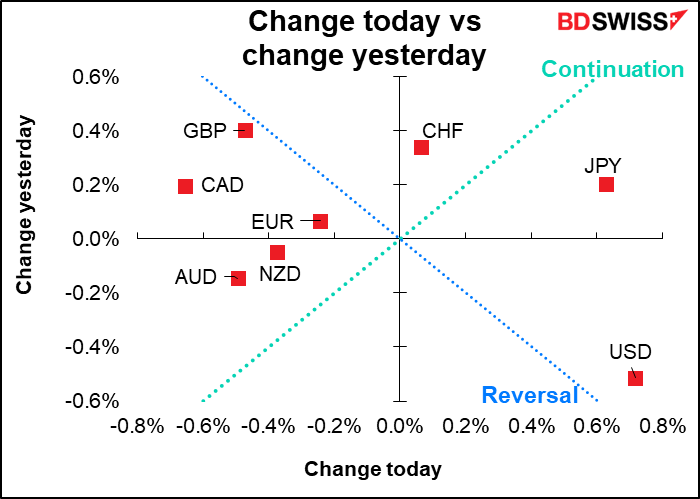 The Netherlands was the first EU country to re-enter a strict nationwide lockdown in response to the spread of the Omicron variant. The country Sunday shut all bars, restaurants, non-essential shops, cinemas, and gyms until at least Jan. 14. Professional sports events will take place without crowds and homes can invite a maximum of four guests during the Christmas period, to be reduced to two after the holidays. The Netherlands caseload has been coming down slightly recently, but is still around double the average for the Eurozone. 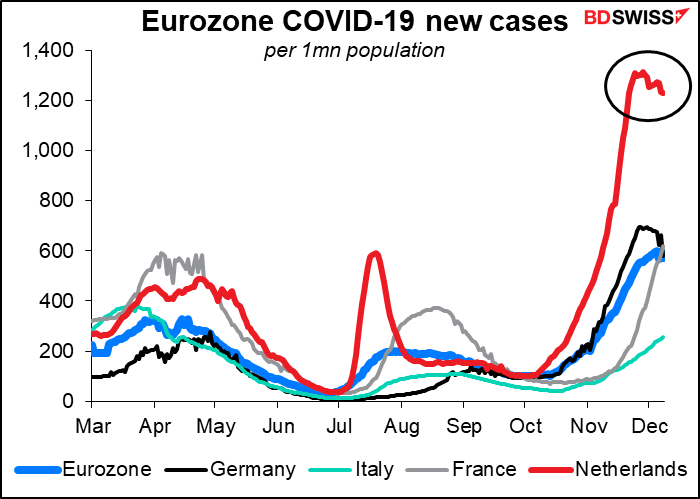 The Dutch move set off corresponding restrictions on travel in several other European countries. According to the FT, Germany set new entry requirements for people from the UK and several other European countries. The UK was designated a “virus variant region,” triggering Germany’s toughest travel regulations. New travel restrictions were also introduced for arrivals from Denmark, France and Norway. France also is restricting travel with Britain. Austria, which is just emerging from a national lockdown, said it would allow entry only to vaccinated travellers from Monday. Ireland is introducing an 8 PM curfew for pubs and restaurants from Monday.

Worryingly, there were demonstrations and protests against the measures in many cities across Europe, some of which turned violent.

If this presages what will happen throughout the Eurozone, then we can expect the European Central Bank (ECB) to delay tightening and for the euro to weaken vs USD. The US is structurally incapable of instituting such widespread measures because of the federal system, which leaves such decisions up to the individual states. Of course that also means the US will ultimately suffer more casualties than the EU. 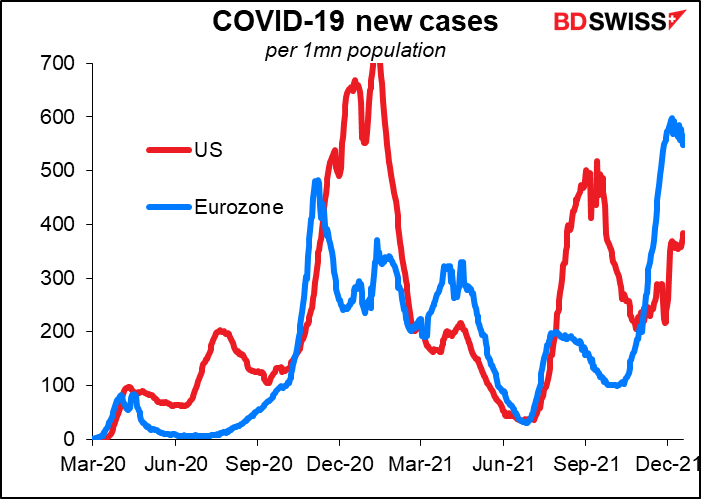 Some states in the US are back to near-record levels of cases. New York is particularly worrisome because the vaccination rate in New York City is quite high. Also the state was one of the hardest-hit at the beginning of the pandemic so many of the most vulnerable people died early on. The high rate of cases then shows that populations are still vulnerable even after acquiring some level of “herd immunity” through vaccination and natural infection.

Estimates are that the US should be seeing the steep part of its exponential growth in two to three weeks, just as the New Year begins. 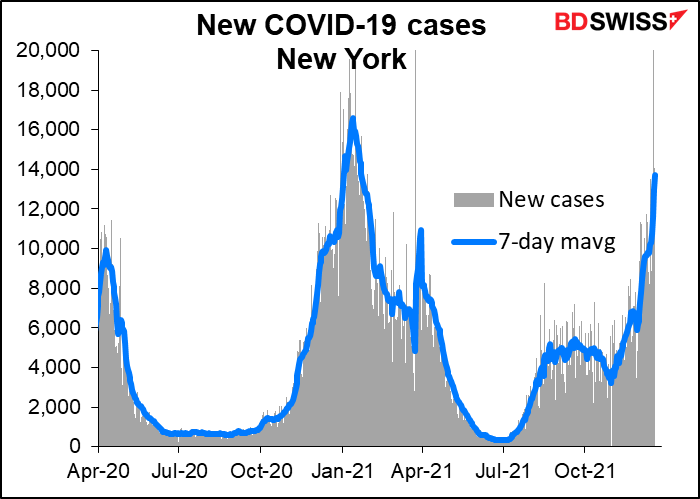 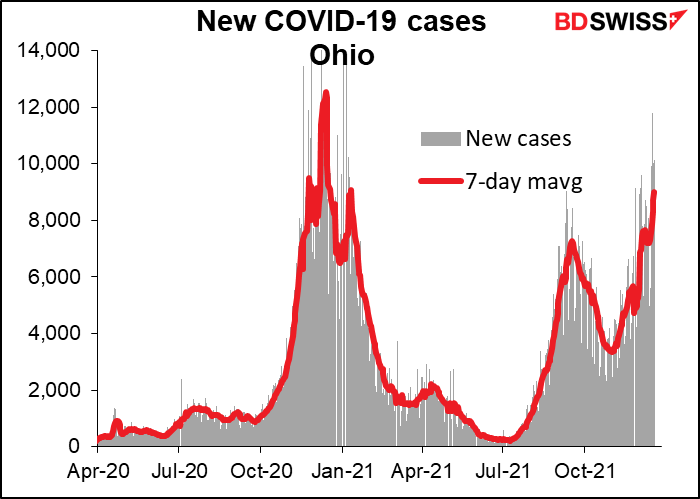 As a result we had a typical “risk-off” reaction: stocks down, bond yields down, oil down, commodity currencies down, and USD, JPY and CHF up.

Normally AUD would be the biggest loser in a “risk-off” day like this, but the 4% decline in oil prices send CAD reeling.

USD was boosted by comments from Fed Gov. Waller, who made a speech Friday in which he said inflation was “alarmingly high” and “persistent” (i.e., no longer “transitory”) and said that a rise in the fed funds rate “will be warranted shortly after our asset purchases end” in March. The market now sees a 60% chance of a rate hike in May, the next meeting after March, and a 40% chance of a hike in March. 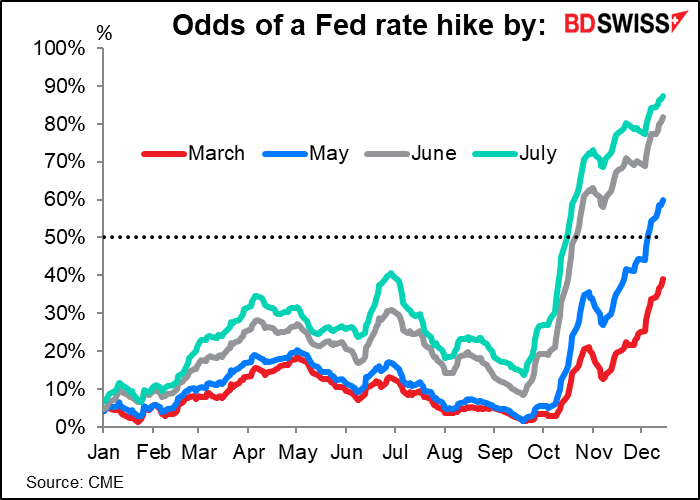 Waller also said in response to a question that the Fed should start shrinking its balance sheet in the second half of the year. This would be very different from the experience of 2013-2018, when the Fed waited three years after it finished tapering a four rate hikes before starting on “quantitative tightening.” It would be a very aggressive move and quite USD . 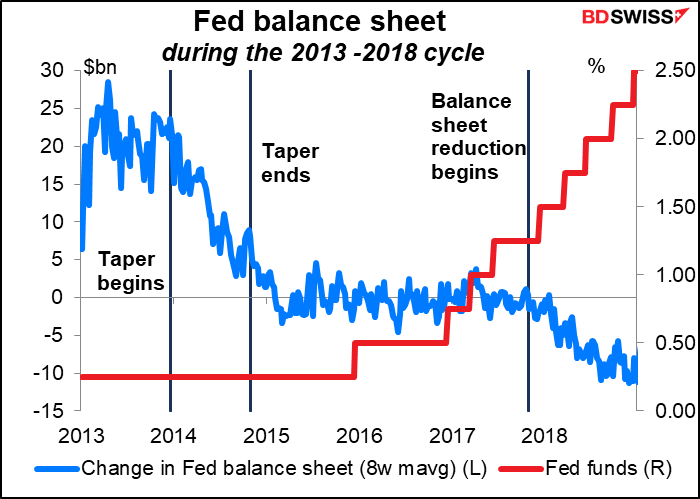 In Britain, Brexit negotiator Lord David Frost resigned, citing differences over the Government’s COVID-19 strategy (not its Brexit strategy, which Frost negotiated). In a letter to PM Johnson, Frost objected to restrictive measures and said the UK needed to “learn to live with Covid.” This is another blow against PM Johnson, who is rapidly losing the support of his own party. 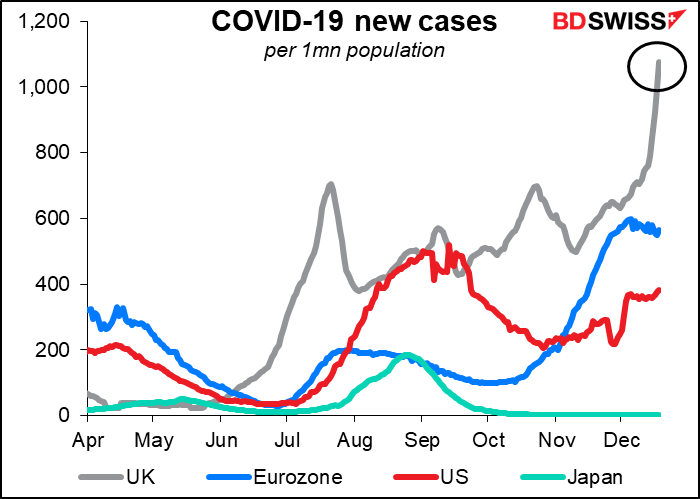 Frost’s departure may make it easier for Britain to negotiate an agreement with the EU over Northern Ireland, but could endanger PM Johnson’s position. Frost has been a strong critic of the role that the EU demands for the European Court of Justice (ECJ) in enforcing the NI agreement. His departure would make it easier for PM Johnson to compromise with the EU on this issue – some might say “capitulate,” not compromise. But that would infuriate the Eurosceptics in the Conservative Party, who might then push to replace Johnson.

In my Weekly Outlook: Some “unknown unknowns”, I mentioned as some way-out ideas for 2022 the possibility that Trump’s arrest could set off a civil war in the US, or that cheating by Republicans at the midterm elections could trigger a constitutional crisis. Imagine my surprise when I saw these two articles in the Washington Post over the weekend. Apparently I’m not the only one worried about these possibilities:

In short, we have to recognize political risk as a major threat to the dollar from late 2022.

In contrast to last week, when speculators mostly just took risk off the table, this week they were more or less neutral USD overall but with some major shifts in allocation. They massively cut their short MXN position while also reducing shorts in CHF, JPY, and AUD. On the other hand, they flipped to short NZD from long and increased their short EUR, CAD, and especially GBP positions.

While the overall movement may have been USD-neutral, the composition isn’t – speculators are now short every major currency vs USD. (The CoT report also includes BRL, RUB, and ZAR, but I don’t follow those as they aren’t widely traded among retail.) 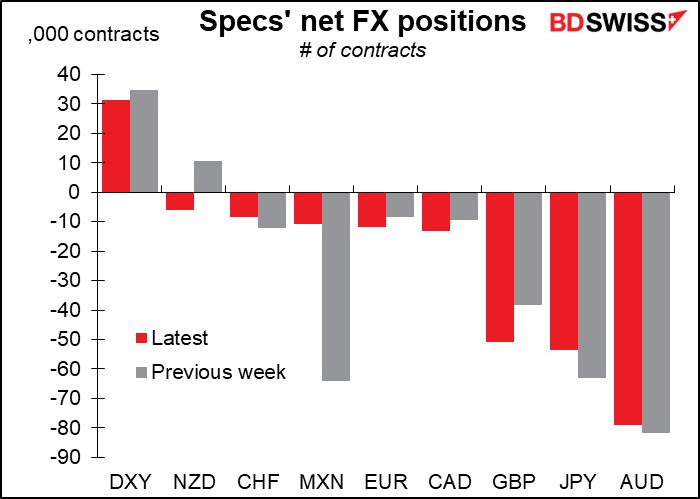 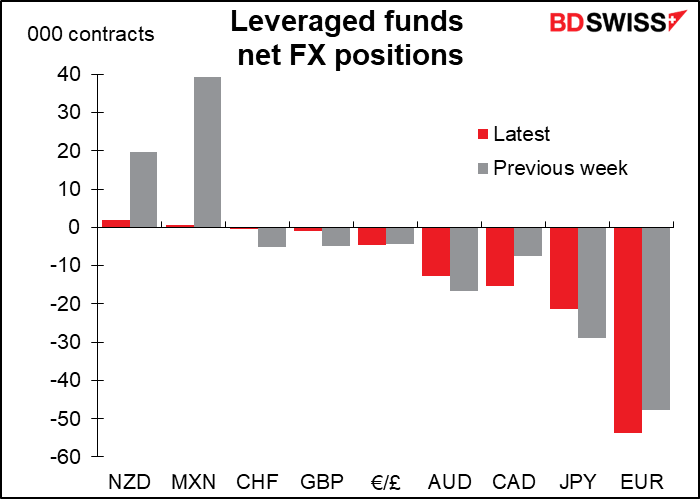 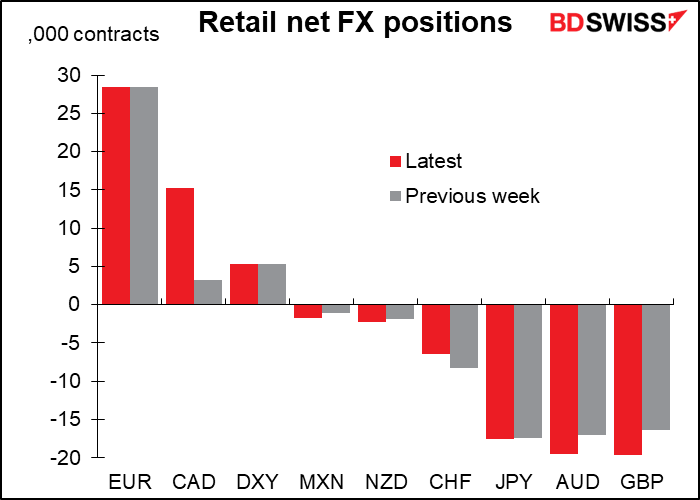 Precious metals: specs cut their longs of both gold and silver a little bit. 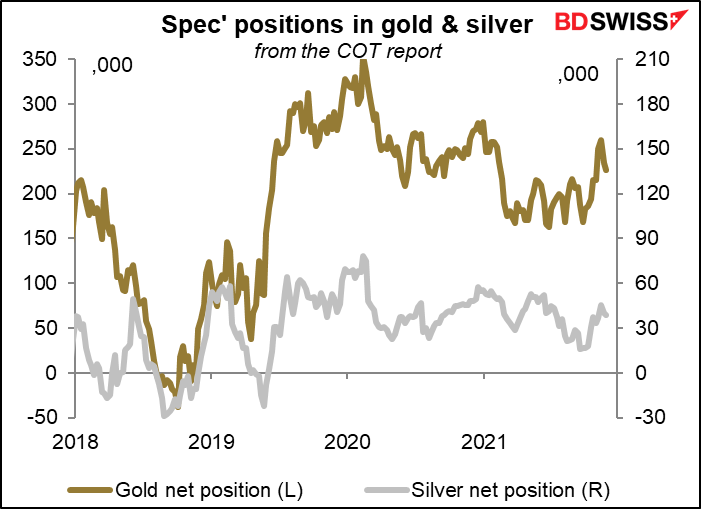 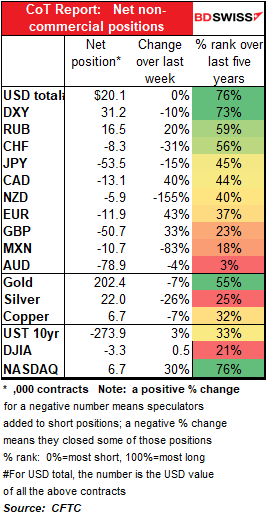 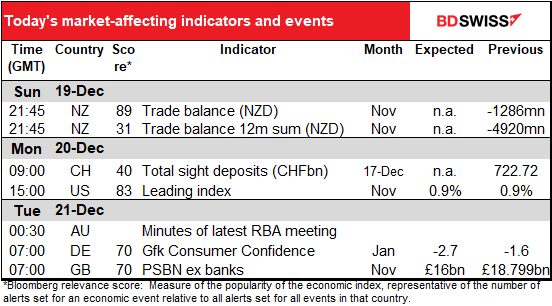 Last week was one of the busiest on record. To balance things out, this week is one of the quietest.

During the European day, the only thing on the schedule is the weekly Swiss sight deposits. In the week ending Dec. 10 they finally came in in size. 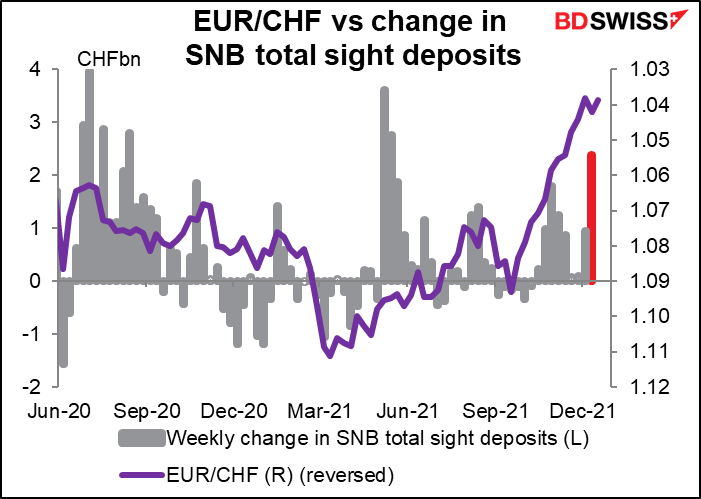 What’s the Swiss National Bank (SNB) intervention policy nowadays anyway? How is it that at last week’s SBN meeting they repeated, as always, that they “remain willing to intervene in the foreign exchange market as necessary, in order to counter upward pressure on the Swiss franc,” and yet the franc continues to appreciate – CHF rose 4.2% vs EUR just since the previous SNB meeting just three months earlier? (1.0854

At the press conference following last week’s meeting, SNB President Jordan explained the Bank’s approach. He noted that with inflation being higher abroad than in Switzerland, “The nominal appreciation therefore does not entail an appreciation to the same extent in real terms.” (1) He observed that Switzerland’s real trade-weighted exchange rate, which takes into account the inflation rates of the various countries, “has hardly changed since the beginning of the pandemic.” “There is thus no change in our assessment that the Swiss franc remains highly valued. At the same time, we have been able to prevent a stronger rise in inflation in Switzerland by allowing a certain amount of nominal appreciation,” which makes imports cheaper. “The increase in the value of the franc in recent months has therefore contributed to the rise in prices in Switzerland being kept relatively low.” 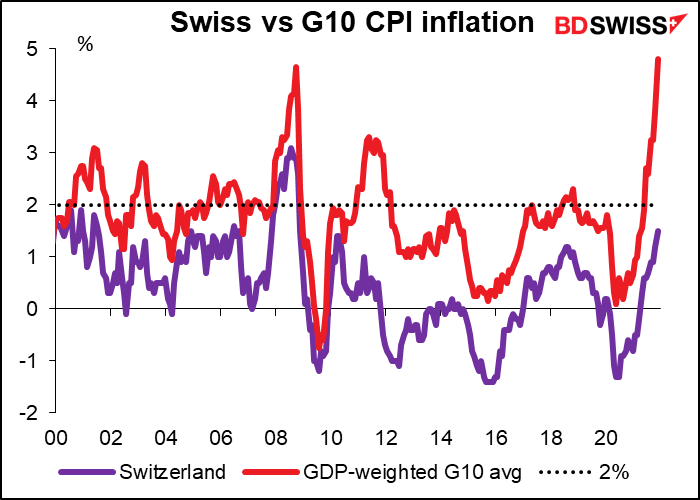 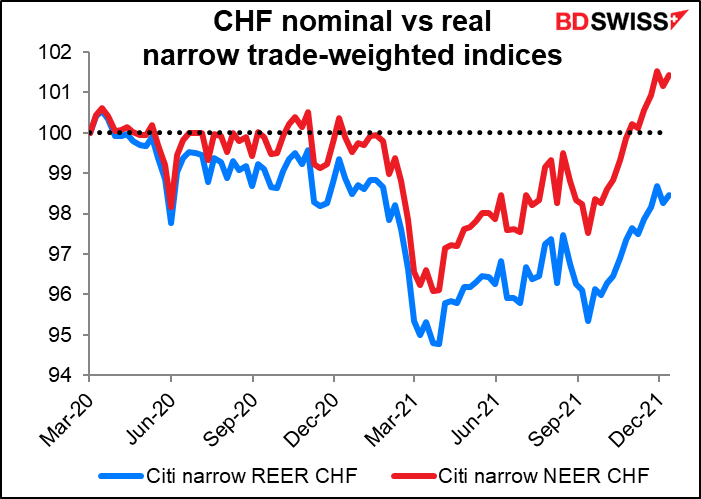 Jordan also pledged to renew large-scale intervention if the pandemic induced a “risk-off” move the created a surge into CHF. That could be why they boosted last week’s intervention – as a signal to the markets that they were still “closely monitoring” CHF.

“By now we are all well aware that, time and again, uncertainty can lead to increased demand for the Swiss franc and result in stronger upward pressure. This could then quickly weigh on the economy again, and depending on the circumstances could even cause inflation to fall back into negative territory. We will therefore continue to closely monitor the development of the Swiss franc exchange rate and will take the overall currency situation into consideration in our analysis. And we will react as necessary to ensure price stability in Switzerland and to further support the economic recovery.”

After that the only thing on the schedule is the US leading index, which attracts a lot of attention despite the fact that all of its constituents have already been announced and therefore it should contain no new information. It’s expected to stay at last month’s pace, which is fairly good and should support USD. 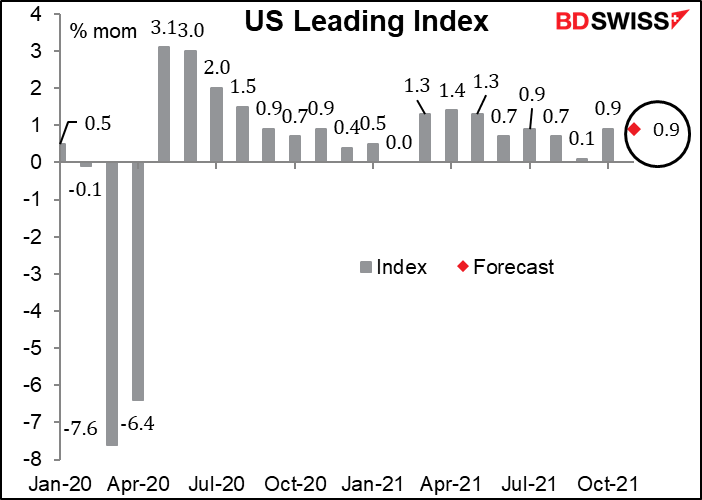 And that’s about it!

Overnight the Reserve Bank of Australia (RBA) releases the minutes of its December meeting. After Gov. Lowe made a speech on Dec. 16 in which he outlined the three options the Board will consider for its bond purchase program at its February meeting, it’s unlikely that the minutes will contain anything new.

Just FYI, those three options were:

1. “to further taper the bond purchases from the current rate of AUD 4bnn a week, with an expectation that the purchases would come to an end in May.”
2. “to taper further and then review the situation again in May;” and
3. “to cease bond purchases altogether in February.”

Gov. Lowe said that “no decision” has been taken yet. “In deciding between these options, the Board will use the same three criteria that it has used since the outset: the actions of other central banks, how the Australian bond market is functioning, and most importantly, the actual and expected progress towards the goals of full employment and inflation consistent with the target.” In that respect, the Q4 CPI, due Jan. 25th, is a key data point for AUD.

With the Fed doubling the pace of its tapering and the ECB and BoJ both planning to stop at least part of their pandemic aid in March, the first criterion argues for option #1 or #3. And with headline inflation right at the top of their 2%-3% target range and the unemployment rate already below where it was before the pandemic began, it looks to me like they’re likely to choose option #3, a hard stop in February. That would be bullish AUD. 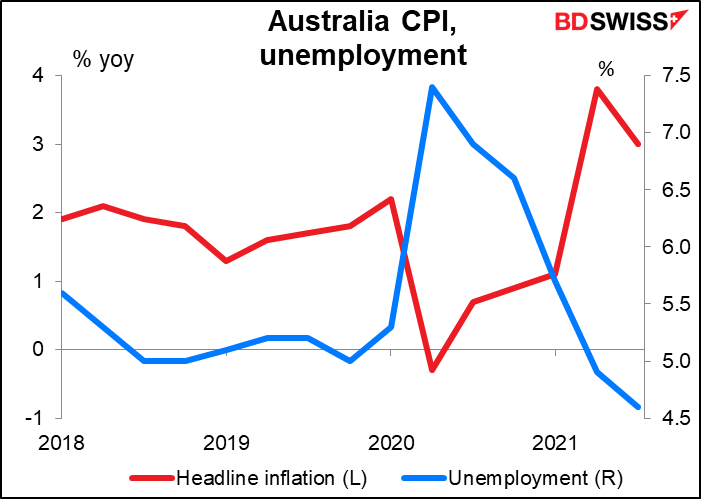 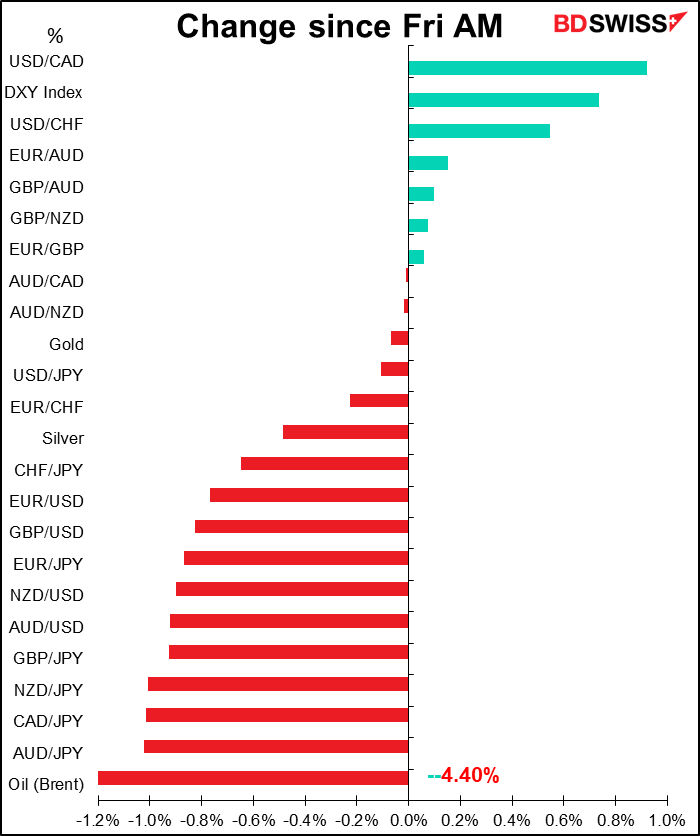