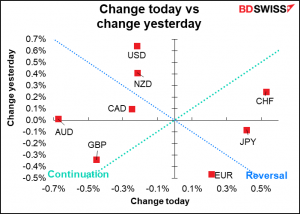 The two longest fences in the world are both in Australia:

It seems that the Reserve Bank of Australia (RBA) is now sitting on one or both of these.

It got rid of its 0.10% yield curve control target for the 3-year benchmark bond (no kidding!) but it maintained its cash rate target at 0.10% and said it would continue with its quantitative easing program in which it buys AUD 4bn of bonds a week (until at least mid-February 2022).

As for the forward guidance…it basically gave up. “Our forward guidance is based on the state of the economy, not the calendar,” explained Gov. Lowe. “Given the information we currently have to hand, it is still entirely possible that the cash rate will remain at its current level until 2024. But it is also possible that an earlier move will be appropriate.” The end paragraph of the statement following the meeting, the paragraph with the forward guidance, did away entirely with the estimate for when rates might rise.

In his press conference though, Gov. Lowe ruled out a rate hike in 2022. Market expectations of such an early hike are “a complete overreaction to recent inflation data,” he said. “I recognise that some other central banks are raising rates, but our situation is different…For inflation to be sustainably in the target range, wages growth will have to be materially higher than it is now. This is likely to take time.” 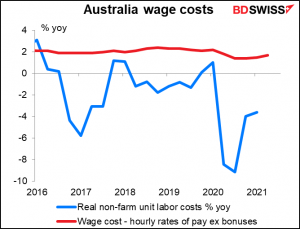 (Latest data for hourly rates of pay is 2Q. Next data release is Nov. 17th.)

The market still doesn’t believe him. The first rate hike is still priced in for the next six months. However, the market did seem to believe his comment that “The Board is prepared to be patient” and reduced its estimate for rates three years out. 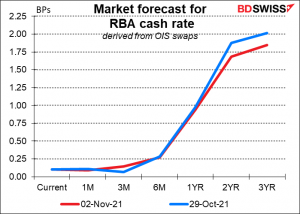 Personally, I don’t believe him, either. I think he is still stuck in the old Phillips Curve way of thinking. I haven’t run the figures for Australia, but I know in some other countries the relationship between unemployment and inflation (known as the Phillips Curve) has broken down in recent years. Something similar has happened with wages too. For example, in the US there was a strong connection between wages growth and inflation in the 1960s, but since 2010 there’s been virtually no correlation. 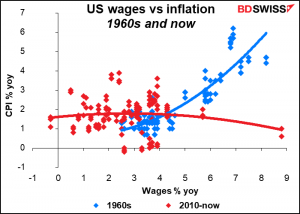 I think then that the RBA will eventually have to capitulate when it sees that inflation remains “persistent” even without strong wages growth. However this may take some time for the RBA to admit that the old relationship has broken down.

On the other side of the ledger, CHF and JPY were the two main gainers. JPY up probably on the weaker Tokyo stock market (TOPIX -0.6% today).

As for CHF, Monday’s Swiss sight deposits data showed that the Swiss National Bank (SNB) is standing against the stronger CHF but nowhere near as resolutely as it did before. For example, compare last week’s intervention with that of July 2020, the last time that EUR/CHF was hitting up against 1.06 in July 2020. (CHF 1.8bn vs CHF 2.9bn, 4.0bn & 1.6bn, continuing in that range for several weeks until it got back to 1.08.) It’s now more of a smoothing operation than a “line-in-the-sand” even as EUR/CHF slips below 1.06. This could be the way the SNB goes along with the global trend toward tighter monetary policy, only doing it through the exchange rate rather than through its policy rate. The SNB has kept its policy rate unchanged since 2015 and will probably not move it until the European Central Bank (ECB) does, but it can easily allow the exchange rate to drift higher. 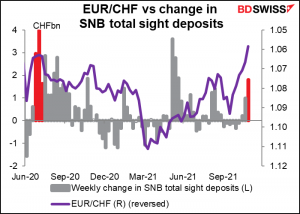 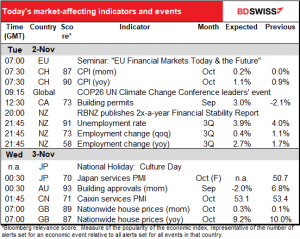 In case the COP26 climate summit isn’t exciting enough for you, the Finnish Financial Supervisory Authority is holding a seminar: EU Financial Markets Today and in the Future. A lot of bigwigs will be talking there and something could hit the headlines, although the only ECB official I can see in the lineup is Andrea Enria, Chair of the Supervisory Board, so probably not much discussion of monetary policy as such.

We briefly discussed the Swiss consumer price index yesterday. It was a bit higher than expected at 1.2% yoy vs 1.1% expected. Given how exorbitant prices are there, the country should have 10% annual deflation for the next decade to bring prices into line with international prices, but for some bizarre reason the Swiss National Bank, like every other central bank, wants to achieve 2% inflation. I guess they’re paid in CHF so they don’t notice how expensive everything is. Using the Big Mac index, CHF is the most overvalued currency in the world. (Luckily I’m a vegetarian so I haven’t bought a Big Mac in decades, but I’m sure if we devised a Rabbit Food Index, Switzerland would rank pretty high on that one, too.)

Not much else on the schedule today. Canadian building permits aren’t that important for the FX market.

Overnight, the Reserve Bank of New Zealand (RBNZ) publishes its twice-a-year Financial Stability Report. With the first hiking cycle since 2014 now underway, the market will look to the report to see what the RBNZ thinks about household financial obligations and vulnerabilities stemming from the incredible surge in mortgage lending that took place during the pandemic and how that will affect households as mortgage rates rise. 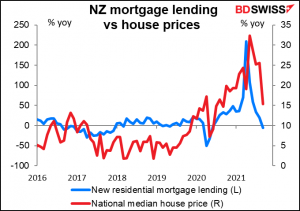 The New Zealand employment data is expected to show further improvement in the country’s labor market. 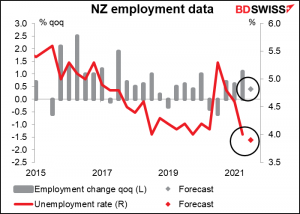 If the forecast for tonight’s figure is correct, then New Zealand should be right back on track for employment for where it would’ve been had there been no pandemic. That’s unusual in today’s world. The Reserve Bank of New Zealand has an explicit “dual mandate” that makes it responsible for employment as well as inflation, but in this case employment should be no obstacle to rate hikes. 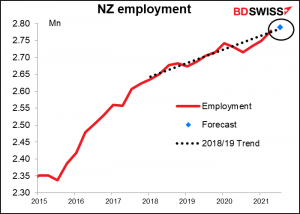 Apparently the final service sector purchasing managers’ indices (PMIs) start overnight with Japan even though the country is on holiday for the well-loved Culture Day. This is a big day for high schools and colleges as each club puts on some sort of display or presentation for this day. It’s one of the highlights of the school year for clubs – they work a lot to prepare something great. As for people above school age…I’m not sure how much culture they imbibe on this day. I don’t remember any special half-price sales at the Kabuki Theater, for example, but maybe my memory has faded.

Here’s a picture of a school where all the clubs have posted banners advertising their booths for their festival.

The Caixin/Markit service-sector PMI for China is expected to be little changed, but then again it’s normally little changed. And anyway people are much more concerned with China’s manufacturing than its service sector.

The House Price Index published by the Nationwide Building Society is expected to show another modest mom gain, but that comes after some spectacular gains thanks to the government’s now-expired reduction of stamp duty land tax, the tax people have to pay when buying a house. The tax was cut from July 2020 to end-Sep 2021 to encourage property market activity, which it certainly did. Buyers didn’t have to pay stamp duty on the first GBP 500k of all property purchases, up from GBP 125k previously. 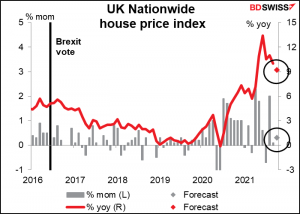 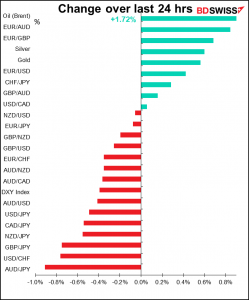