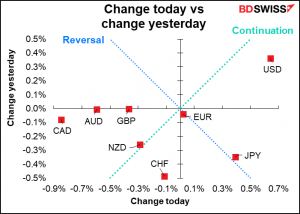 A big “risk-off” day as US stocks fell 0.9% Friday. The market is recovering somewhat this morning as Asian stocks are mixed, but theS&P 500 futures are down another 0.7%. USD and JPY were the main beneficiaries of the “flight to safety.”

Along with the ever-present fears of the virus are concerns about Chinese real estate company China Evergrande Group, which is in serious financial difficulties. The company is the biggest Asian borrower in the dollar-denominated high yield market, with some USD 300bn of liabilities that appear to be on the brink of default. The company has two interest payments due on Thursday, one for USD 83.5mn and one for CNY 232mn. There is a 30-day period before a missed payment is considered a default. Evergrande also has some bank interest payments due today, although Monday and Tuesday are holidays in China. The authorities have reportedly warned major lenders not to expect repayment. The big question is whether Evergrande’s problems will cause contagion to other companies/sectors in China and hit growth there.

Fears about Chinese growth have sent iron ore prices plunging. This is likely to be negative for AUD. 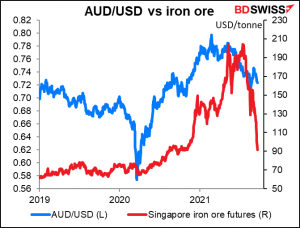 It’s noticeable though that CHF did not benefit from the trend. Is that because of “supernatural forces” in the FX market (aka the Swiss National Bank) or because of investor sentiment? The Commitments of Traders Report shows speculators increasingly negative on CHF. Perhaps they just didn’t want to get involved in buying the currency. 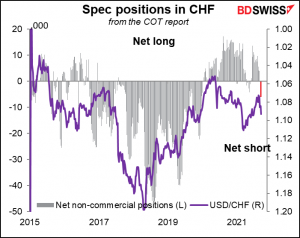 CAD has followed oil down.

Oil seems to be even more important for CAD than the polls, which show PM Trudeau’s Liberal party marginally in the lead in today’s election, suggesting that he’ll at least hang onto power and probably gain some seats (although still remain shy of a majority). Or is that a CAD-negative development? It’s definitely a failure and an embarrassment for Trudeau, who had hoped that his government’s stimulus spending and its handling of the pandemic, particularly the successful vaccination drive, would allow him to gain a majority. In fact the government, although having a minority, hasn’t had much difficulty in passing legislation as it has benefited from the progressive socialist New Democrats to its left. 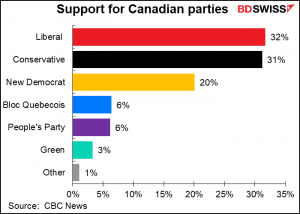 Speculators went even more short AUD, GBP, and CAD, while flipping to short CHF from neutral before. On the other hand they added to small NZD longs. 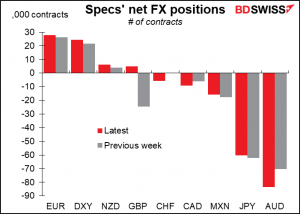 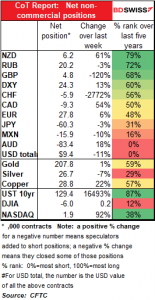 Not much on the schedule today, that’s for sure!

Although EUR/CHF kept climbing, the Swiss National Bank seems to have been out of the market the week of the 10th. We’ll see if they stayed out last week when we get the always-riveting Swiss sight deposit data. 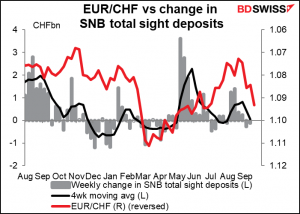 Other than that, people who trade the beleaguered AUD will no doubt take a keen interest in the minutes of the Reserve Bank of Australia’s August meeting. At that meeting, the RBA managed to deliver the neat trick of a “dovish taper” through the twist of reducing the pace of its weekly bond purchases to AUD 4bn a week from AUD 5bn while at the same time extending their life until February from November. The market was split pretty evenly over what they would do – reverse the taper decision or continue with it – and so people will want to see what the thinking was that lead the RBA to this Solomon-like decision. 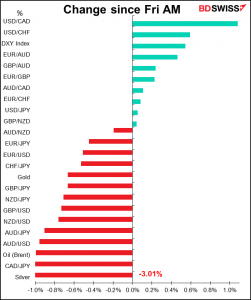