Bitcoin fell 5.4% on Thursday, ending the day near $39.6K, and further to $38.9K on Friday morning, down 1% in 24 hours. Ethereum has remained almost unchanged over the same time (-0.3%), while other leading altcoins from the first are changing in different directions, from a 1.6% increase (XRP) to a 1% decrease (BNB). 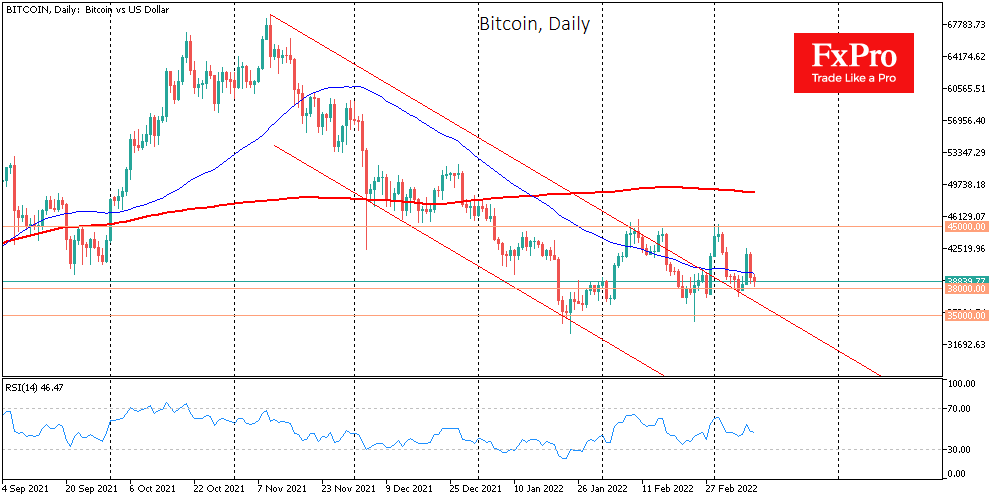 According to CoinMarketCap, the total capitalization of the crypto market sank by 0.2% over the day to $1.74 trillion. The bitcoin dominance index continues to decline, falling from 42.7% yesterday to 42.4% due to the greater stability of altcoins.

The crypto-currency index of fear and greed lost 6 points in a day to 22, again entering the territory of “extreme fear”.
Bitcoin fully returned the growth of Wednesday, which was caused by the adoption in the United States of the first document on the regulation of cryptocurrencies. The decline in stock indices and the growth of the dollar also did not favour the purchases of the first cryptocurrency, which often moves in unison with the general demand for risks.
The first decree on cryptocurrencies signed the day before can become the basis for future US legislation on regulating relations in the crypto sphere. Against this background, the shares of companies associated with cryptocurrencies have noticeably risen in price.

One of the largest investment banks, Goldman Sachs, is going to expand its offering for trading digital assets. The bank is exploring the possibility of launching bilateral crypto-currency options.

World-famous investor and writer Robert Kiyosaki has warned that the world economy is now on the verge of hyperinflation and advised to “stay away” from the stock market.

Against the backdrop of a severe crisis in the financial system of the Russian Federation and restrictions imposed on the circulation of the dollar and the euro, the demand of the population for cryptocurrency has increased sharply. Now it is primarily used for the transfer of capital abroad or for parking in “hard” currency.

Analysts believe that regulators are unlikely to be able to effectively prevent such transactions. But the state is helped by crypto-exchanges, which block the Russians on their own initiative.

There remain the possibilities of p2p platforms, that is, transfers between individuals. However, there are significant risks of fraud associated with such transactions.