Having added more than 8.2% to Tuesday’s lows last week through Friday, S&P500 futures have surpassed the 50-day moving average and are testing the 200-day average by the start of US trading.

We mentioned last week that the “death cross” should not be taken as a sell signal this time because it took place after a comparatively long decline. It was a repeat of 2020 when the cross appeared after the market bottomed. 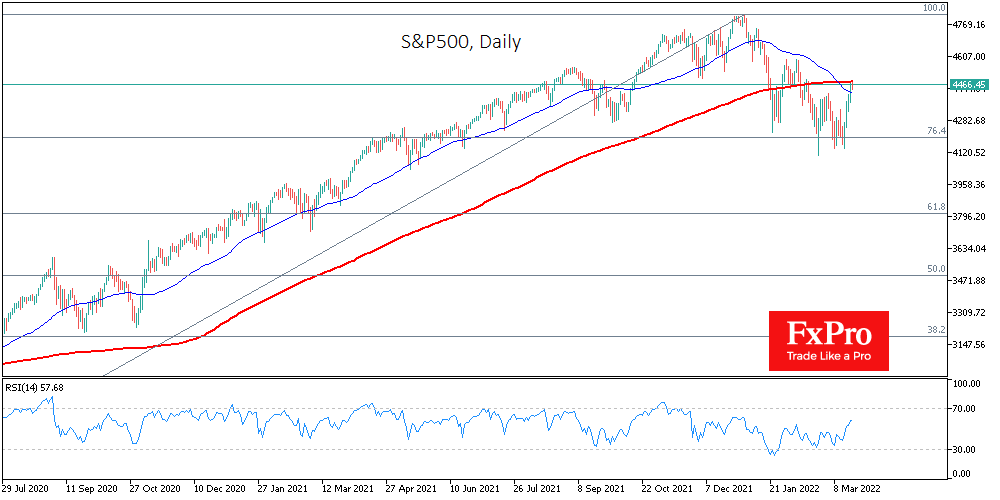 The recovery rally of the last week is undergoing an important test. If the S&P500 manages to get above 4500 today or tomorrow, firmly entrenched above the 200-day moving average (currently at 4480), we can confidently talk about breaking the correction. In that case, there is a potential for a quick rally towards 4600 already this week, 4800 over the next 2-3 months, and up to 5000 by the end of 2022.

Looking only at the news headlines, the military action in Europe and the tightening of monetary policy by the Fed are not conducive to buyers’ optimism. But, paradoxically, we are now in a situation where pessimism has reached or is close to its peak.

Managers surveyed by Bank of America note the maximum pessimism since April 2020, which is near historical turning points. The only exception to the last 25 years was in 2007-2008 when pessimistic expectations persisted for an extended period due to banking sector problems.

The Fear & Greed Index continues to improve from 16 (extreme fear) a week ago to 40 (fear) now. It has turned solidly around from the extreme lows, but equities are still an impressive distance from the highs at the beginning of the year, which leaves considerable room for growth from current levels.

A strong sell-off in US equities from current levels and a consolidation below 4400 on the S&P500 could be a strong bearish signal, indicating an inability for the market to develop the offensive, which risks putting it back into a rapid decline situation.