How things change! Yesterday the screen was all green when I woke up and I was asking for songs about green lights. Today? It’s Red Lights by Tiesto. Nearly every stock market is lower, some by large margins: the S&P 500 -2.5%, NASDAQ -3.5%, and this morning the Nikkei -3.7% and Hang Seng -3.1%.

The reason of course is once again the bond market. For my younger readers, who may not remember Bill Clinton much less his campaign strategist James Carville, I’ll repeat a quote from Carville, which is now one of the most famous statements in finance:

I’ve been talking about rising yields for several days now. So far though it’s been at the long end of the curve. What was important yesterday was that yields started rising at the short end of the curve, too. 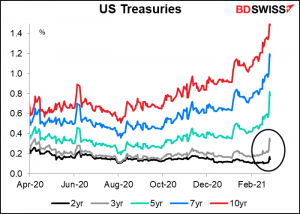 That’s because you can think of a bond yield as a series of short-term interest rates rolled over constantly. EG, a one-year rate is just an overnight rate rolled over 365 times. A two-year rate is an overnight rate rolled over 730 times. Etc. If the market really believes that the Fed is going to keep rates steady for three years, then interest rates out to three years should be more or less the same as the overnight rate (well, people will want to start hedging the eventual rise so it’s not quite that simple, but you get the idea…)

The rise in three-year rates then is the bond market saying that either Powell’s forecast is wrong or that it doesn’t trust the Fed’s new average inflation targeting regime. It could easily be the former; we’ve heard different forecasts from different people. For example, Fed Vice Chair Clarida this week said inflation later this year will most likely be above 2% because of base effects. He noted though that most of that rise will be transitory, which Fed Gov. Brainard specifically said was “not the kind of inflation that monetary policy would react to.” But he did say it. Similarly, Treasury Secretary Yellen said we could be in full employment by year end, although I haven’t heard anyone currently at the Fed saying anything like that. Nonetheless, a rise in short-end yields now is entirely consistent with the guidance we’ve gotten from some officials. That may be one reason why the market is now pricing in lift-off much earlier than it was even a week ago. 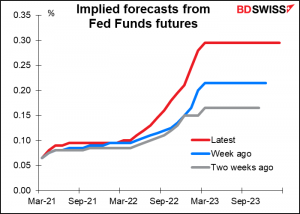 One noticeable point though: the rise in yields did not come from the market pricing in higher inflation. On the contrary, breakeven inflation rates fell yesterday. The result was a steep rise in real yields. 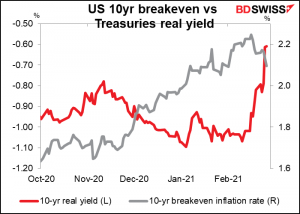 The leap in yields in the middle of the curve – 5yrs up 22 bps and 7 years up 19 bps – was probably due to the disastrous 7-year note auction yesterday. The “bid-to-cover ratio” – how many bids were received vs how many bonds were sold — was only 2.04, the lowest in the history of this auction, while the “tail” — the difference between the average accepted yield and the highest yield — was a staggering and unprecedented 4.4 bps Usually it’s less than 1 bp. This shows investors’ reluctance to buy bonds even in this relatively short duration.

Thanks to the poor auction, the yield on 10-year notes momentarily surged past 1.60% for the first time in a year. That level causes some problems for equity market investors, because it’s about the same as the dividend yield on the stock market. At that point, investors looking for income are likely to say, why should I take the risks in stocks when I can go into bonds and lock in the return?

The rise in yields wasn’t confined to the US. It was general around the world. 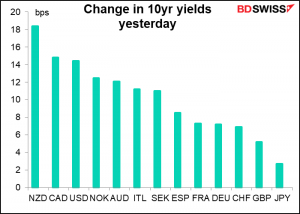 I should note that markets have calmed down a bit this morning and yields are generally a bit lower than at the New York close yesterday.

The question for us then is, why did the FX market react the way it did? Why was AUD the worst-performing currency when the market is signaling higher growth? The answer there is probably that the Reserve Bank of Australia (RBA) has a policy of yield curve control (YCC) that will restrain Australian yields from moving much higher. That limits the attractiveness of the AUD going forward. For example, in reaction to the surge in yields the RBA yesterday said it would buy AUD 3bn of bonds today in an unscheduled operation.

Then again, so does Japan, but JPY managed to do OK yesterday. That makes me think JPY is ripe for a move lower (i.e., USD/JPY move higher) once the panic and “risk-off” sentiment fades and economic fundamentals dominate again.

One of the reasons the dollar did so well was that US officials have remained quite sanguine in the face of the higher yields. Following Powell’s comments Tuesday that the rise in yields was “a statement of confidence on the part of markets that we will have a robust and ultimately complete recovery,” Kansas City Fed President George echoed that view Thursday, saying “Much of this increase likely reflects growing optimism in the strength of the recovery and could be viewed as an encouraging sign of increasing growth expectations,” while St. Louis Fed President Bullard said the rise in yields “is probably a good sign so far because it does reflect better outlook for US economic growth and inflation expectations which are closer to the committee’s inflation target.” Atlanta Fed President Bostic noted that “rates are still very low from a historic perspective,” which is certainly true.

In contrast, not only did the RBA intervene, but so did South Korea in its market. European Central Bank (ECB) Chief Economist Lane made a speech in which he mentioned the words “financing conditions” 53 times (ok, the speech was titled: “The compass of monetary policy: favourable financing conditions”, so we can expect him to mention financing conditions a number of times.) It’s clear that the ECB is more concerned about the level of rates in the broader market than the US is. Lane said that the central bank would “purchase flexibly according to market conditions and with a view to preventing a tightening of financing conditions,” while Executive Board member Schnabel said that a “too abrupt increase in real interest rates on the back of improving global growth prospects could jeopardize the economic recovery.”

This “yield curve divergence” could spell the start of a round of further dollar strength until such time as Fed officials get worried and start to jawbone yields down. 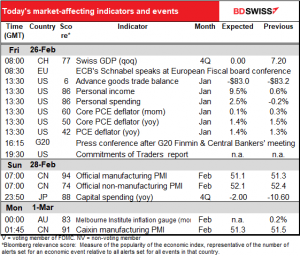 There will be a virtual meeting of the G20 Finance Ministers and central bankers today. Officials will discuss the work program and the group’s priorities for this year, which are structured around the 3Ps framework of the Italian G20 Presidency: People, Planet and Prosperity.

Usually nothing market-affecting comes out of these meetings, because in order to get any agreement out of such a diverse group they have to keep everything quite bland. However, some groups have been urging them to back a new round of IMF Special Drawing Rights for the world’s poorest countries as they struggle with the pandemic. That might help boost emerging markets. Treasury Secretary Yellen endorsed this idea yesterday in a letter to her counterparts.

Only one indicator worth talking about today: US personal income & spending.

US personal income is expected to soar 9.5% mom – I had to check to make sure that’s the right number – presumably because of the latest round of pandemic payments that hit people’s bank accounts during the month (not mine yet, unfortunately), plus the restoration of some federal unemployment insurance programs.

That would be a bit below the record 12.4% mom increase last April under similar circumstances, but with unemployment much less now (6.3% vs 14.8% back then), total income is likely to be much higher – a record, in fact. This could fuel the fears of post-pandemic inflation that have been increasing recently as investors worry what everyone will eventually do with all this money that’s been piling up for months. 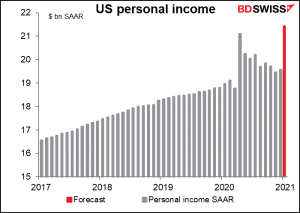 Personal spending is also expected to be up sharply after two consecutive months of decline. Retail sales soared 5.3% mom during the month. Aside from May and June, when the economy was recovering from the plunge in March and April, this was the second-largest mom increase in retail sales ever in data going back to 1992. The biggest increase, 6.4% mom, was in October 2001, and we all remember what happened in the US to discourage shopping the previous month.

This rebound would leave US spending just a touch (0.2%) below pre-pandemic levels. I doubt if it can be sustained, but it could cause a burst of optimism that would support the dollar. 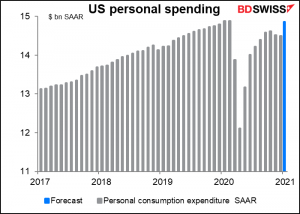 The personal consumption expenditure (PCE) deflators that come out along with the income & spending data are the Fed’s preferred inflation gauges, so they should be key indicators, although the markets seem to pay more attention to the consumer price index. Core PCE inflation, the Fed’s preferred inflation gauge, is expected to tick down, which could help to reverse some of the recent uptrend in inflation expectations and help the bond market to recover. That would be negative for the dollar.

In his comments to the Senate Banking Committee Tuesday, Fed Chair Powell said that he expected inflation to accelerate in the near term because of base effects and the release of pent-up demand when people can finally go out and spend their money. However, he didn’t think “that those effects should either be large or persistent,” thanks to “decades of well-anchored inflation expectations.” He noted that “inflation dynamics do change over time, but they don’t change on a dime” and said he thought that the risks to the inflation outlook were “[weighted to]the downside for a long time.” 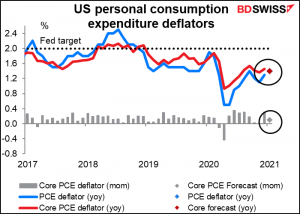 Over the weekend we get the official China purchasing manufacturers’ indices (PMIs). I say “official” because it’s compiled by the China Federation of Logistics and Purchasing in collaboration with the National Bureau of Statistics, as opposed to Caixin/Markit, which compiles the other version as well as most of the other PMIs used around the world. The official one surveys some 3,000 companies throughout the country, including many of the large, state-owned enterprises, while the Caixin/Markit PMI surveys only around 420 firms, mostly smaller, privately owned companies on the booming East Coast.

Both the manufacturing and service-sector PMIs are expected to fall, which could be negative for risk sentiment in early Asian trading. That might benefit JPY and CHF at the expense of AUD and NZD.

Then a few hours later Caixin announces its manufacturing PMI. That’s expected to be unchanged.

They are all expected to be at a relatively low level that suggests the Chinese economy is expanding but at a fairly tepid pace. That might not help risk sentiment any, either. 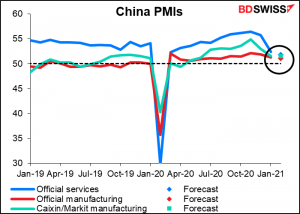 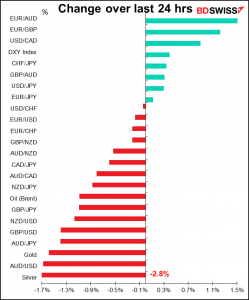