The Crypto Market’s House of Cards

Total crypto market capitalisation, according to CoinMarketCap, fell 19.4% overnight to $1.14 trillion. Bitcoin’s dominance index jumped 2.5 percentage points to 44.7% due to the altcoin sell-off.

Bitcoin resumed its decline on Wednesday, but it outperformed the stock market with considerable amplitude this time. Perhaps even pulling it down. BTC broke through last July’s lows and tested lows in late December 2020, just above $26.5K.

Altcoin fell sharply on the back of Terra (LUNA), losing 96% in just one day on UST’s (project’s stable coin) drawdown. Despite its declared peg to the US dollar, the Terra ecosystem’s algorithmic stablecoin, UST itself, continued to lose value on Wednesday. Worth $1 as recently as the beginning of the week, UST fell to $0.30. According to The Block, Luna Foundation Guard’s (LFG) attempts to stabilise the UST stablecoin have failed. 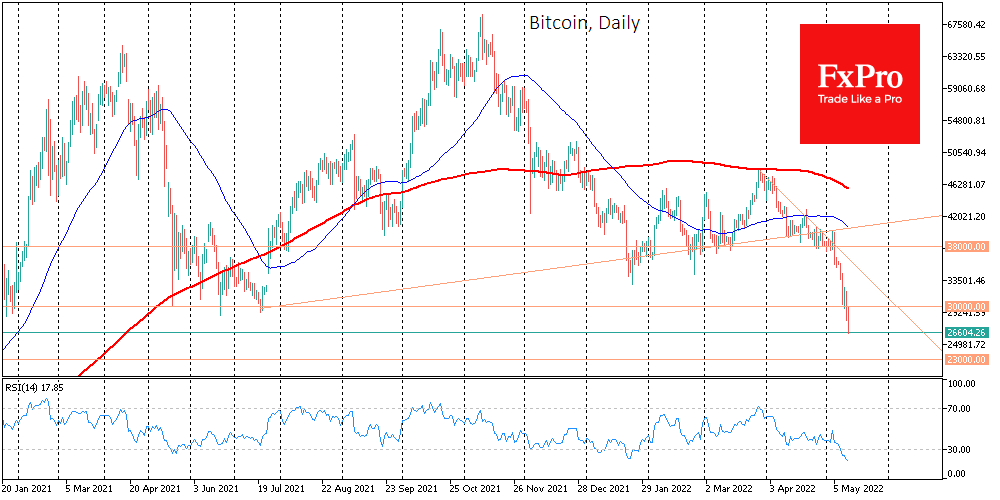 Now the attention of crypto market participants and confidence in stable coins. Tether is the most traded stablecoin with a daily turnover double that of Bitcoin – 2% below the dollar as capital outflows continue to push it in one direction.

Stablecoin’s volatility is a new reality for the crypto market. Previously, investors preferred to park capital in stable currencies, exiting altcoins and withdrawing it from cryptocurrencies. We see a full-fledged exodus from the sector, and the entire crypto market is crumbling like a house of cards.

Adding fuel to the fire, the US Federal Reserve has published its semi-annual Financial Stability Report, highlighting the risks of using stable coins. Democrats on the US Senate Banking Committee have proposed increased oversight of cryptocurrencies, including stable coins.

According to CryptoQuant, hodlers have sold some of their bitcoins. Investors holding BTC for more than a year have been taking it to exchanges to sell over the past month.

The CEO of cryptocurrency exchange Kraken, Jesse Powell, said he would like to see bitcoin fall to $20,000. He would allocate the lion’s share of his capital to buying BTC in this case.