The Stock Market Switches to a new Idea

About 13 months ago, in early November 2020, we saw a shift in the previous months’ investment idea thanks to Biden’s presidential election victory and the emergence of effective and affordable vaccines. Then we saw a investors’ shift from so-called “work from home” companies to the broader market and a strong recovery in energy and financial sector stocks. But the technology sector, which had initially stalled, did not find itself on the margins of the markets either.

The trade wore off early this November, and the leading sectors retreated from their peaks. Initially, news of the new omicron strain scared the markets. Still, in recent days some of the fear has dissipated, and there are hopes that the new variant is acting as a light at the end of the tunnel, offering hope that the mutation of the virus has made it less deadly, though many times more infectious. Most importantly, existing vaccines mainly protect people, if not from the disease, then from the severe course of the disease.

If the first observations are confirmed, this could prove to be a welcome sigh of relief for the tourism industry, as it dramatically reduces fears of stricter lockdowns. As early as next spring, the coronavirus will not restrict people’s travel and leisure activities in the most optimistic scenario. If so, the following investment idea for the markets could be airline and tourism stocks, which have been at annual lows recently, as the surge of optimism from November last year to March this year quickly deflated.

In addition, the markets could finally switch from outperforming growth stocks to value stocks due to the monetary policy reversal in response to inflation. Growth equities have been pulling the market up in all recent years when the Fed has been in a position to stimulate inflation rather than suppress it. 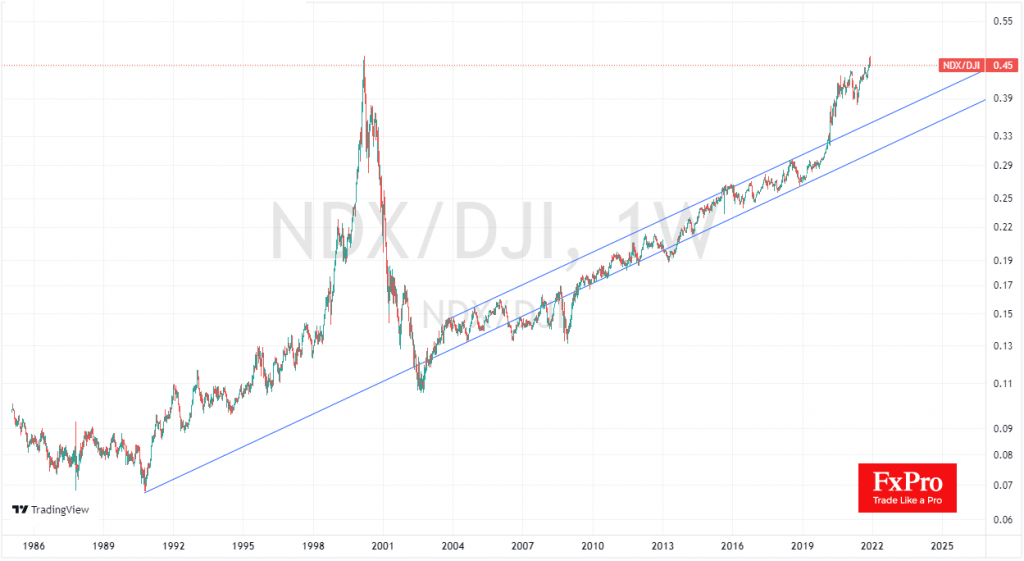 Investors favour stocks of companies with a sustainable business model and regular dividends during such periods. These could be the Consumer Staples and Utilities. These sectors lagged last year, adding 2% and 7%, respectively.

Possibly, the ‘switch’ we suggest will not be harmful to the Financial sector, which is benefiting from increased lending and rising interest rates.

In terms of indices, we see an increased chance that the Nasdaq/Dow ratio, which repeated the highs of the 2000 peak at 0.47, will correct in the coming months. We are not saying that the ratio will return to 0.11, meaning it will lose ¾ of its current values. More sensible at the moment is to expect this ratio to correct to 0.30 in 2022-2023, assuming a 35% fall in the Nasdaq with the Dow Jones unchanged.