US Up as US Interest Rates rise; ECB, Fed Speakers 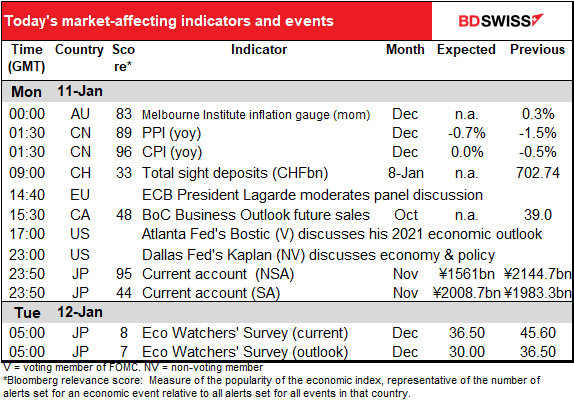 I could go on endlessly about what’s happening in the US, but this is a forex comment, not a political op-ed page piece. I just want to repeat someone’s observation:  thanks to the Republican Party, America is now a place where a President can lead a failed insurrection and still remain in power. And the elements that carried out that insurrection are not “fringe” either; it was the mainstream political right, as directed by the leader of the Republican Party and supported by the majority of elected Republicans in the House of Representatives. We’re likely to see more of it on or before Jan. 20th, when President-elect Biden is inaugurated, only this time the Democrats will be in charge of security. They’re not likely to be so accepting of right-wing terrorism. Watch out.

The other amazing thing then is that the currency of such a country would gain so much.

Various markets performed in a contradictory fashion. Looking at the FX market, it was a textbook “risk-off” move, with USD, CHF and JPY being the best-performing currencies and the three commodity currencies at the bottom, with the risk-sensitive AUD leading the way down. Yet elsewhere it was a definite “risk-on” environment:  US and emerging market stock markets moved further into record territory (although markets are mixed in Asia this morning), oil was up, and both gold & silver fell sharply.

The key to the dollar’s response is probably the increase in US yields, both nominal and real. 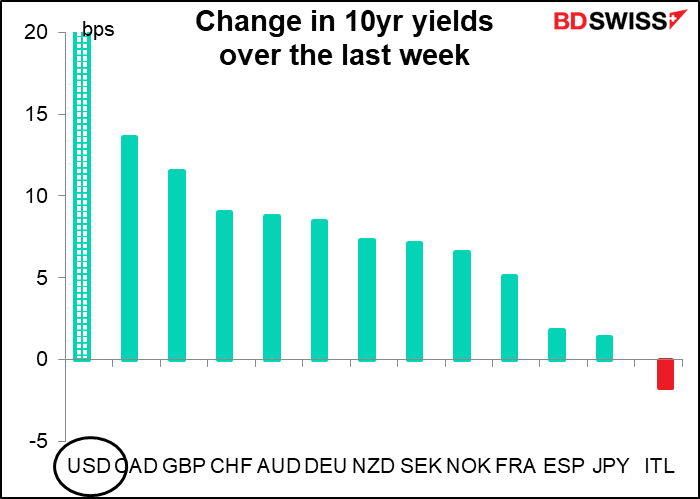 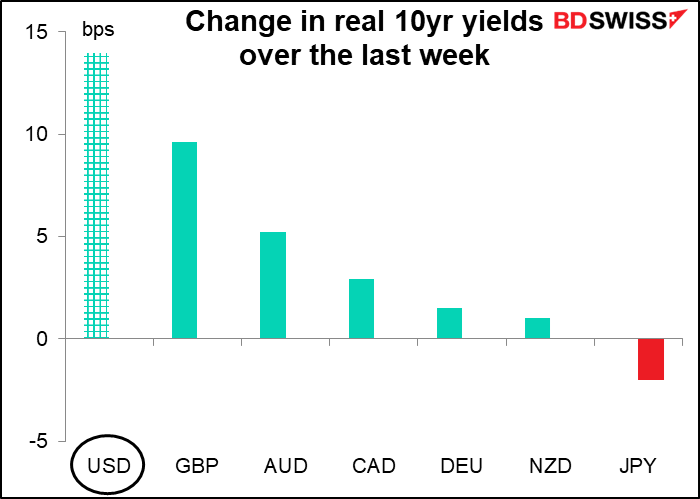 The fact that US yields continued to climb on Friday despite the unexpected fall in US payrolls shows how fiscal policy is dominating the discussion. The market was initially troubled by comments from West Virginia Senator Joe Manchin, a conservative Democrat, that he would oppose increasing the direct payments to struggling people to $2,000 each. With only 50 Senators in the 100-seat Senate, the Democrats can’t afford to lose even one in these crucial votes. However, later assurances that Manchin would go along so long as the payments were “targeted to those who need it” reassured the markets that the payments would go through.

Also, there were some assurances that the transition to President-elect Biden’s administration would take place without incident, which helped to calm political concerns – although I still expect trouble at the inauguration. But at least Trump admits he lost.

Higher yields and a higher dollar are pressuring gold. 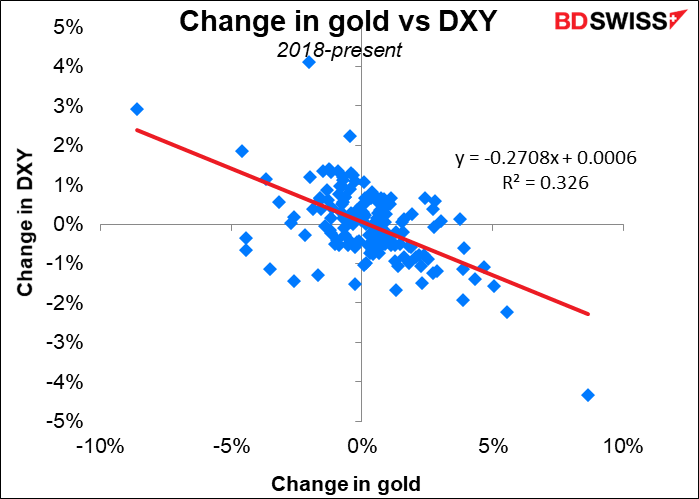 Something scary is going on. Have you noticed what’s happening in Ireland? The virus cases there are exploding.

Until December, the highest they ever recorded on a day was 1,168 new cases (using the seven-day moving average). On Friday they recorded 6,050 cases. That’s the average for the week. The actual number on Friday was 8,227. 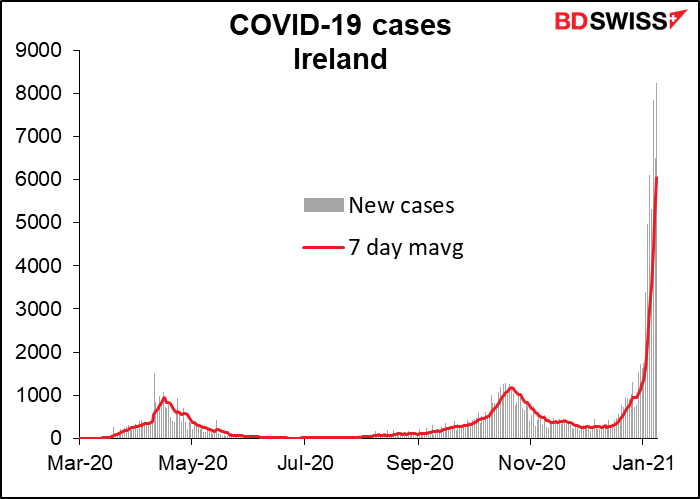 Scouring the internet for information, it appears that Christmas is the big holiday in Ireland and a lot of people may have gone home to be with their families. This is the result.

If you look at the US, you can see a bump up starting a week or two after Thanksgiving (the fourth Thursday in November).

I hope we don’t start to see a similar trend in other European countries. 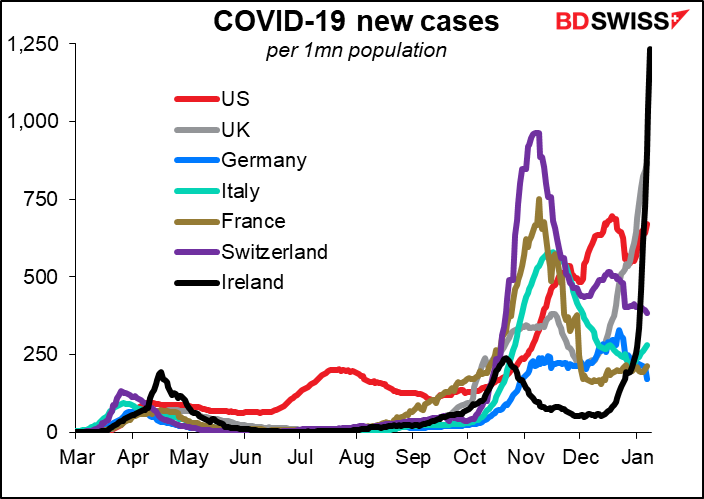 Not much on the schedule for today in terms of data.  ECB President Lagarde will moderate a panel discussion during the One Planet Summit in Paris and there are several Fed speakers, who may give their views on the likelihood of tapering down the Fed’s bond purchases this year.

I’ll be interested in the Swiss sight deposit data, because this is the first week after the end of the new year’s period. The seasonal distortions should be over and we should be able to see if they’re back in the market intervening. On the other hand, with EUR/CHF behaving relatively well (from their point of view, that is) perhaps they don’t feel the need to intervene much at this point. 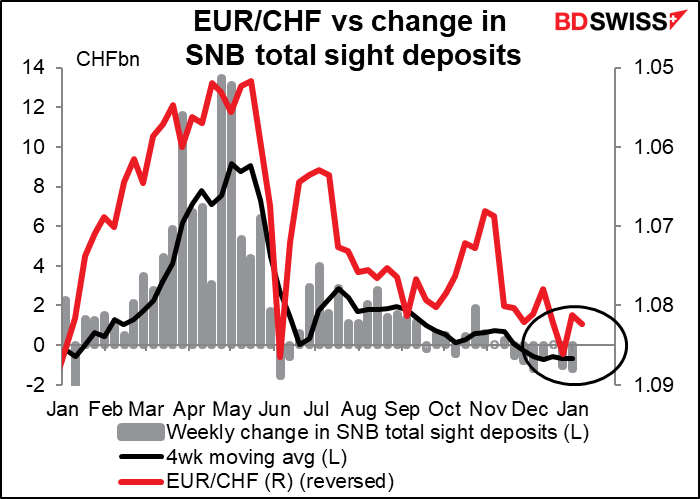 That’s about it for the indicators for the European and US days. There’s no forecast for the Bank of Canada’s business survey, their version of Japan’s tankan, but I don’t think it’s as closely watched as the tankan is, either. 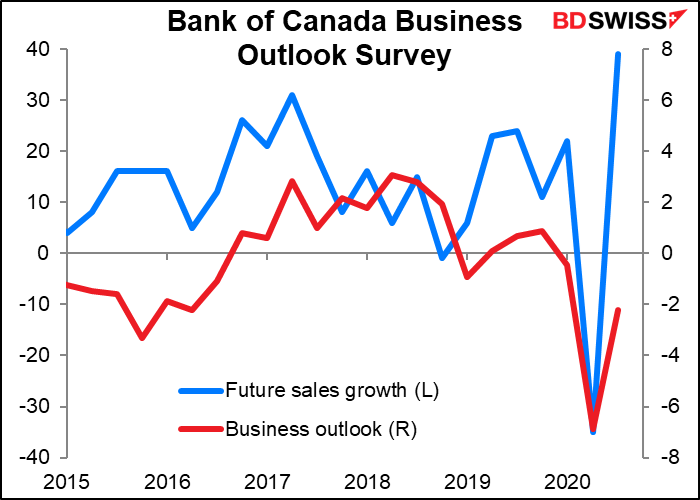 The next item of interest isn’t until the Asian day starts and Japan announces its current account figures. The market follows the non-seasonally adjusted figure for some reason (probably because for many years the country’s seasonal adjustment was pretty bad, although that problem has been fixed). I prefer to look at the seasonally adjusted forecast. It’s expected to rise a little bit, but nothing significant. I think without a significant movement in the figure, it’s unlikely there’s going to be a significant movement in the yen in response. It could be seen as negative though by those who were hoping for continued improvement. 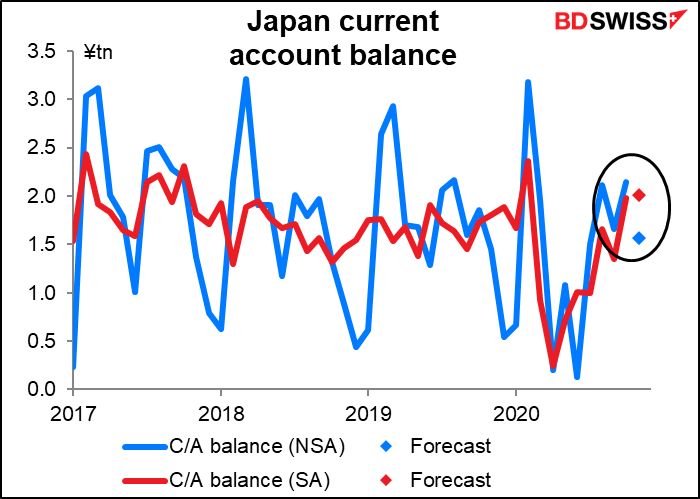 Finally, we have the award-winning Eco Watcher’s Survey. Which award did this win? My award for the lowest Bloomberg Relevance Score of any regularly released indicator that I’ve ever seen (8 and 7, respectively). So why do I bother with it? Because I think it deserves greater attention as a sensitive leading index of activity in the service sector, which is of key importance to Japan right now.

As you can see, it’s bad and it’s expected to get worse tonight. 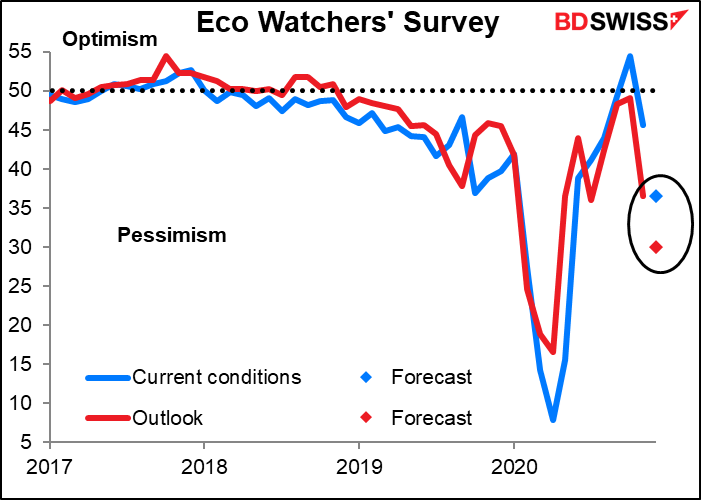 The Eco Watchers’ Survey seems to be more sensitive to changes in the environment than the service-sector purchasing managers’ index (PMI). I think the decline in the Eco Watcher’s Survey is likely to presage a further deterioration in the service-sector PMI, which has a much more respectable relevance score of 70. Signs of further weakening in the Japanese economy could hit the Tokyo stock market, which might cause a “risk-off” strengthening in the yen. Maybe. 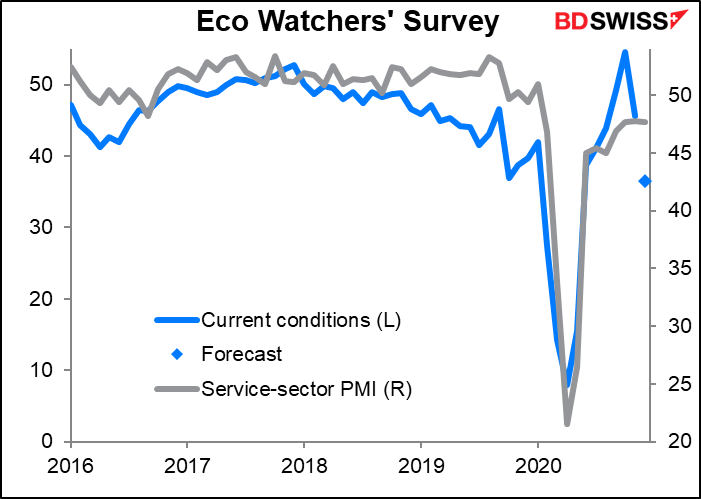 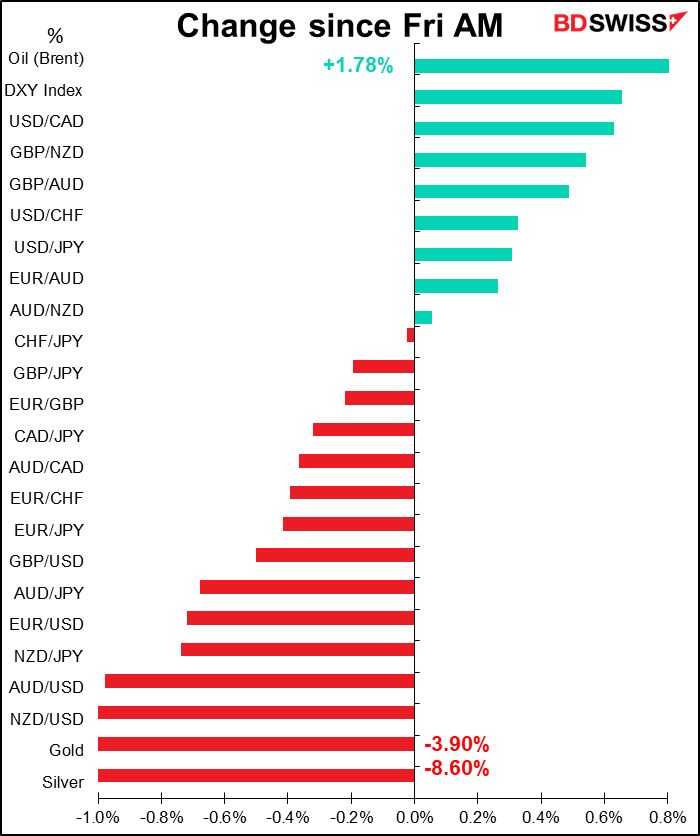