USD & JPY Up, Commodity Currencies Down as US Yields Rise

The two central bank meetings over the last 24 hours were not the main thing pushing the FX market.

The Bank of England was as featureless as I had expected. The votes were unanimous to keep both rates and bond purchases unchanged. The minutes highlighted the improvement in the outlook compared to February thanks to the vaccine rollout, US and UK fiscal easing, and less of a January hit from lockdown than expected, but the Bank’s forward guidance still says that there will be no tightening until “significant progress is being made” in “achieving the 2% inflation target sustainably.” Heaven knows when that might be.

The Bank of Japan (BoJ) on the other hand was as interesting as I had hoped, but I’m not sure how much it impacted the currency market. They certainly delivered on their pledge to make policy more flexible and increase its durability so that the BoJ can continue to support the reflation effort. Many of the changes were in line with leaks that appeared in the press beforehand, as is normal in Japan, the country where “pleasant surprise” is an oxymoron.

The three major themes that they addressed and what they did were as follows:

● More effective purchases of equity Exchange Traded Funds (ETFs): they abandoned their pledge to buy at least ¥6tn a year in ETFs while keeping the ceiling of ¥12tn. That means they won’t have to buy into a rising market. They also said they’d only buy ETFs linked to the TOPIX index, a market-cap- weighted index of all of the nearly 2,000 companies listed on the Tokyo Stock Exchange’s first section. This is a much more representative index than the widely used but poorly constructed Nikkei 225 index, a price-weighted index of 225 stocks that the Nikkei newspaper people choose. The change caused some stocks that are included in the latter but not the former index to fall..

● Alleviation of the adverse side-effects of the negative interest rate policy (NIRP), especially on the profitability of the banks: I admit I haven’t yet read the 60-page report in which they set out their ideas here. According to reports in the press, which were alarmingly vague, the BoJ will offer lending incentives to banks and revise its three-tier reserve system if it lowers its target rates. The changes should allow banks to remain profitable and keep lending even if the bank lowers its already-negative policy rate. The BoJ hopes to end the prevailing view that it can’t cut rates further because of the negative impact that it would have on banks and thereby restore the psychological impact of its forward guidance. That would be a negative for JPY.

● Better functioning of the Japanese Government Bond (JGB) market: it widened the trading band for the 10-year bond to 25 bps from 20 bps. Some comments in the press are touting this as a major concession to the upward pressure on bond yields globally, but it’s hard for me to get excited about it when other countries have seen yields rise by up to 90 bps so far this year. On the contrary, I think this tepid response will lead to further widening in the yield disadvantage of JGBs and further weakening in the yen. 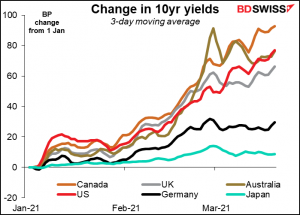 But that wasn’t the main point of interest. The big thing was the crash in oil prices. Both WTI and Brent are now down around 10% from their recent peak, hit just a week ago. There doesn’t seem to have been any specific trigger yesterday, just the culmination of the gradual selling that the market has experienced over the last week. Higher Treasury yields and a stronger dollar, which depresses the price of dollar-denominated commodities such as oil, didn’t help. 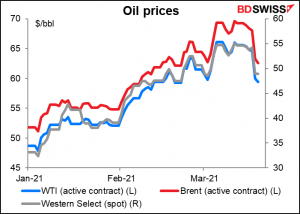 There may also be a continued concern about the impact of the virus on demand in Europe – Paris announced a one-month lockdown as new virus cases in France exceed those of the Eurozone as a whole. 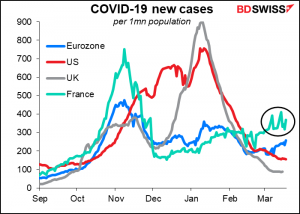 Investors are finally realizing that the Fed is serious about its new flexible average inflation targeting (FAIT) framework. The fact that they kept the 2023 dot on hold at zero even though they expect inflation to be at or slightly above their 2% target level for the next three years seems to have shocked people, even though that’s exactly what they’ve been saying they’d do since the Jackson Hole summit last August. The selloff in Treasurys was driven by higher real rates as inflation expectations fell slightly. Strange, because what the Fed is really saying is that they will allow real rates to go further negative – they won’t raise their policy rate even as inflation recovers.

But while the market seems to be digesting the Fed’s new reaction function with regards to the long end, it doesn’t seem to fully believe them at the short end – the fed funds futures are barely changed and still discounting a rise in rates by Q1 2023, in contrast to the Committee members’ forecasts in the “dot plot,” which predict they’ll still be at zero at the end of the year. 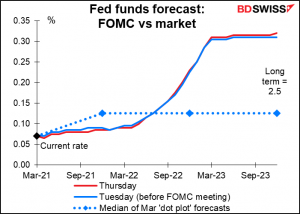 FX market implication: now can we talk about the FX market please? That’s what I’m supposed to be writing about, after all. But on days like this, the movements in the currency market are a byproduct of movements in other markets, so I have to discuss those other markets first.

Naturally, when stocks and commodity prices are falling, the commodity currencies tend to do badly and the safe-haven currencies – JPY, CHF, and nowadays USD – do well. USD did particularly well thanks to the rise in long-term US bond yields (see graph below).

That may also explain why CAD wasn’t the worst-performing currency despite its usual close correlation to movements in the oil market – the downward pressure on the currency from lower oil prices is being offset to some degree by upward pressure from rising bond yields. 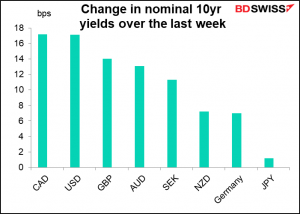 AUD was the weakest of the weak after Australia retail sales totally missed expectations, falling 1.1% mom vs expectations of a 0.6% mom rise. Apparently the “mini-lockdowns” in several states, including one-week lockdowns in Queensland and Victoria, had a bigger impact than people expected.

Not that much on the schedule for today.

The only other thing on the schedule is Canada’s retail sales. They rebounded strongly after the initial decline, but have been fairly lackluster since then, especially in December and January, as lockdown measures took their toll. 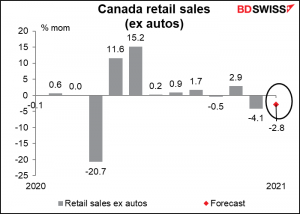 Sales were at one point significantly higher than before the pandemic, but now are expected to be only 0.3% above the January/February average. 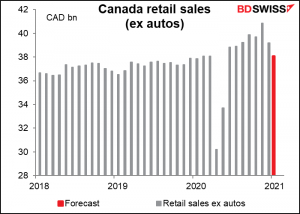 That puts Canada down fairly low in the international recovery stakes, down with Germany and Japan. 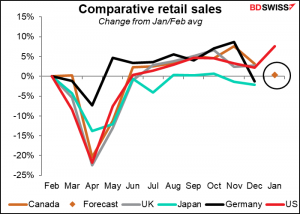 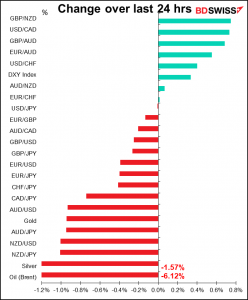