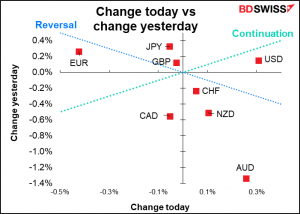 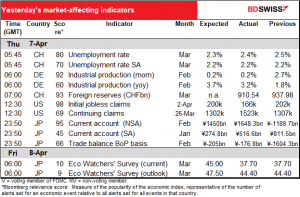 It’s notable that the EUR fell yesterday despite an extremely hawkish set of minutes from the latest European Central Bank (ECB) meeting. The minutes did bolster EUR/USD for about two hours, but that’s it. 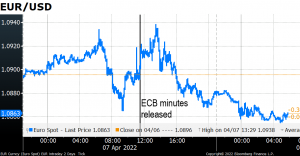 Like the previous day’s minutes from the March FOMC minutes, the minutes from the March ECB meeting also assessed the effect of Russia’s invasion of Ukraine on both inflation and growth. Governing Council members expressed a lot of concern about inflation and many argued that their conditions for hiking rates had already been met.  “A large number of members held the view that the current high level of inflation and its persistence called for immediate further steps towards monetary policy normalisation,” the minutes said. Members noted that inflation was expected to be above target this year and next, and the 2024 projection “could be assessed to be already effectively on target” when you consider how fragile the assumptions are that it’s based on are. “On this basis it was argued that, for all practical purposes, the three forward guidance conditions for an upward adjustment of the key ECB interest rates had either already been met or were very close to being met.”

As a result, some members called for the ECB to take action at the meeting. “…some members preferred to set a firm end date for APP net purchases during the summer and not to make that date conditional on unfolding events. This could clear the way for a possible rate rise in the third quarter of this year…”

Why didn’t they? “Other members expressed a preference for adopting a wait-and-see approach at the present meeting in view of the exceptionally high uncertainty created by the Russia-Ukraine war.” They argued that “fulfillment of the criteria was a necessary but not sufficient condition for a first hike in policy rates.”

This leads me to think that when the ECB staff revisits the forecasts at the June meeting, they could announce an accelerated end to the Asset Purchase Programme (APP), which would pave the way for a rate hike in September.

So why didn’t EUR appreciate? First off, I think the market is more hawkish than the Governing Council has been. The comments didn’t move rate expectations that much. Market participants were already expecting a rate hike in September. 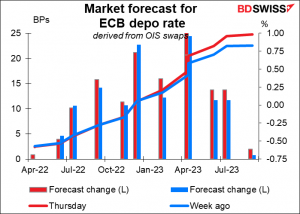 The pair may have been following US rate expectations as expectations for the fed funds rate at the end of the year (blue line) continued to grind higher (= price of the futures contract continues to fall). St. Louis Fed President Bullard, the #1 hawk calling for the Fed to tighten policy, said he’d like to see fed funds at 3%-3.25% by the end of the year, far above the 2.43% that the market is forecasting. 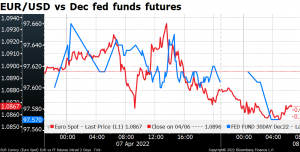 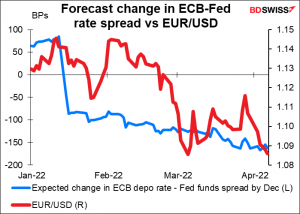 With all the focus on Ukraine we haven’t talked much about COVID-19, which is still raging in many areas. China has seen an incredible surge, with new cases going from essentially none to some 70,000 a day in a matter of weeks. The South China Morning Post reported that Shanghai’s new covid cases rose to 21,222 on Friday. This means there is no scope for reopening under the country’s zero-covid policy. 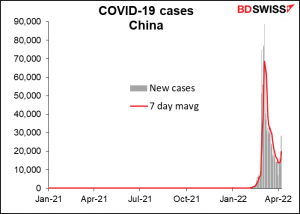 This may be one reason why oil is down this morning: a lockdown in China will dampen demand from the world’s largest oil importer. Also the US Senate voted unanimously to discontinue normal trade relations with Russia and Belarus and to ban Russian oil imports. People outside the US might not appreciate how unusual this is. First off a number of Senators appear to be beholden to Russia if not out-and-out Russian agents. Secondly, until yesterday I doubted it would be possible to get a unanimous agreement in the Senate on what day Christmas should fall on. So this agreement shows a growing consensus in the US about Russia’s culpability. 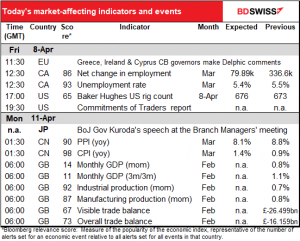 Canada’s employment data usually comes out at the same time as the US nonfarm payrolls but not always, such as this month. Employment is expected to be up by 70k, which would be far below last month’s stunning increase but almost exactly in line with the three-month moving average (72k), which I suspect is how a lot of economists make their forecast. The country loosened up its pandemic restrictions a bit during the month so there should be somewhat of an increase in employment. 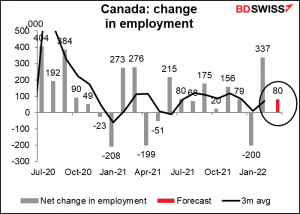 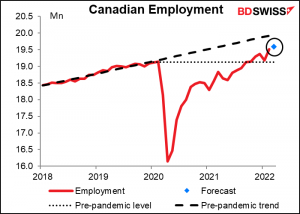 The unemployment rate is forecast to fall one notch. 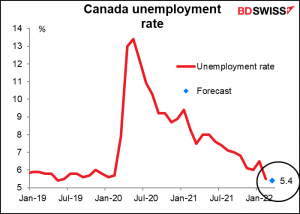 That’s about it as we wait for the Commitments of Traders (CoT) report.

Then early Monday, China announces its inflation data. The producer price index (PPI) is more important for our purposes than the consumer price index (CPI), because China’s PPI is a big part of most other countries’ imported goods prices while the CPI tells us mostly about Chinese food prices. The PPI is expected to continue to decline, which is a good sign all around as it suggests upstream pressures on Chinese manufacturing have peaked for the time being. 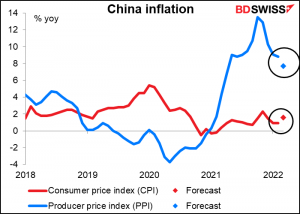 According to the New York Fed’s barometer of supply chain pressures, the worst is long past in China but pressures are starting to rise again. I would expect them to rise further – and perhaps the PPI to rise further as a result – as more and more of the country goes under lockdown in response to the increasing number of COVID-19 cases. 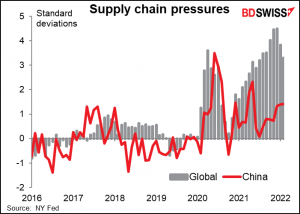 Early Monday in Europe we get the British “short-term indicator day,” with the monthly GDP, industrial & manufacturing production, and trade data.  No forecasts available yet so I can’t write about it. 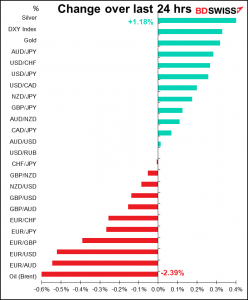