USD Up Sharply Even as Stocks Recover, RBA Extends QE 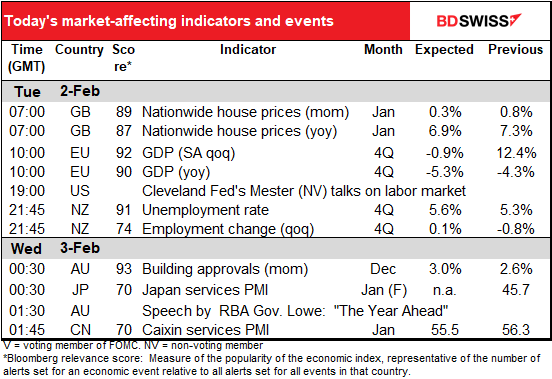 The FX market’s reaction to this strong performance in the stock market was unusual in that USD strengthened all around, rather than weakening as we assume will be the result on “risk-on” days. Yet perhaps that relationship isn’t as strong as we think it is. It’s true that about 60% of the time, the USD trade-weighted index moves in the opposite direction of the US stock market. But that means 40% of the time it doesn’t – when stocks go up, the dollar goes up. Today was one of those days. 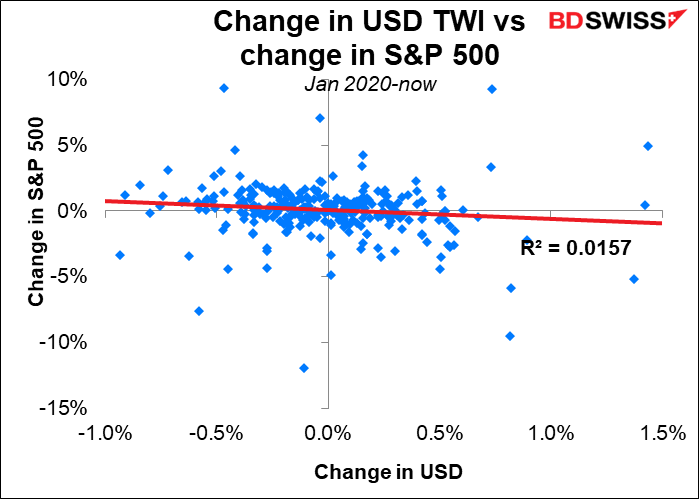 The correlation is a little better if we look at the performance of the TWI vs the previous day’s close. But that shows the dollar only weakens 54% of the time when the stock market strengthens. Higher correlation in the degree of movement but a worse hit ratio. 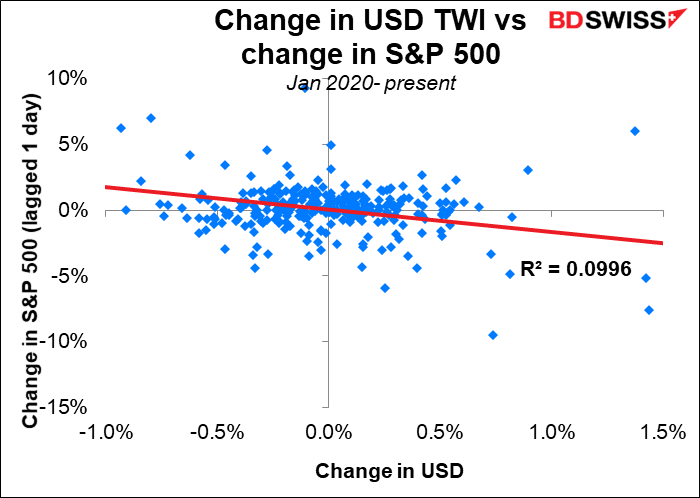 Silver’s gains came pretty much at the opening bell. It started trading early Monday in Asia at $28.93, up 7.1% from Friday’s close. It hit a high of just over $30 ($30.10), which was up 11.4%. But now it’s trading at $28.58, 5.8% from Friday’s close – still up, but off the opening level (although still higher than Monday’s low). The metal may meet some resistance after the CME Group Monday raised margins on Comex silver futures by 18% on silver futures contracts. That could deter smaller investors who don’t have the money to put up more collateral. Of course they could just switch to buying silver options, which have already gone through the roof.

Meanwhile another favorite of the wallstreetbets crowd, GameStop, plunged 31%. I would suggest that anyone tempted to join in the fun on silver in hopes that buying from this source could push the price to the moon might want to take into consideration what’s happened with GameStop as the crowd’s attention moves elsewhere.

CAD’s behavior stands out as unusual. Oil prices rose on news that OPEC ’s planned output increases by the Persian Gulf countries are being offset to some extent by production disruptions among the Africa producers. Yet USD/CAD moved higher (CAD weakened) – not the usual reaction. It looks like there’s no significant Canadian news behind the move, just general USD strength.

I was wrong about the Reserve Bank of Australia (RBA). I  thought that they wouldn’t make any changes at today’s meeting, but rather Gov. Lowe might upgrade his outlook for the economy in his speech tomorrow at the National Press Club. But in the event, the RBA decided to extend its quantitative easing program by a further AUD 100bn when the current one expires mid-April and said it doesn’t expect to increase the cash rate until 2024 “at the earliest.”

I must admit, I found the RBA’s statement to be more optimistic, little changed in fact, and I would rate it positive for AUD. It’s true that they extended the current QE program for another 20 weeks, but at the same time they dropped the key last two lines from their December statement, which said that “The Board will keep the size of the bond purchase program under review, particularly in light of the evolving outlook for jobs and inflation. The Board is prepared to do more if necessary.” In other words, “that’s it, folks.” Much is being made of the fact that they said they don’t expect to tighten rates “until 2024 at the earliest,” but in December they said they didn’t expect to raise it for “at least 3 years,” which would mean December 2023 at the earliest – so a difference of one month. Meanwhile, they were upbeat on the economy; they said “the economic recovery is well under way and has been stronger than was earlier expected” and that “GDP is now expected to return to its end-2019 level by the middle of this year.” This is in line with the market forecast, which also sees output recovering to pre-pandemic levels by Q2 or Q3 at the latest. 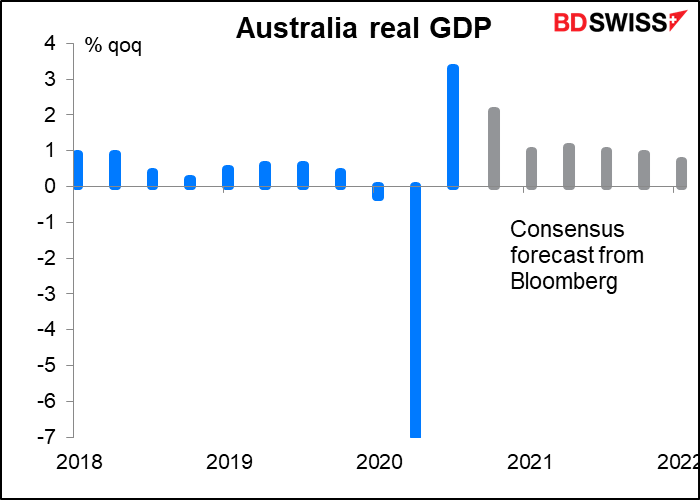 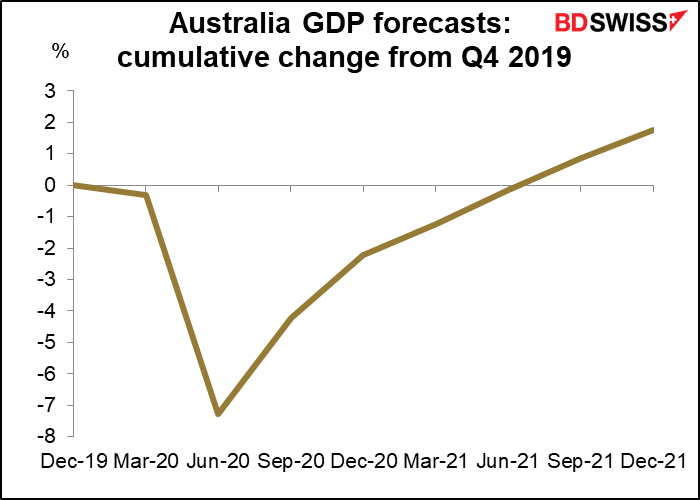 Furthermore – and here’s the odd thing – countries that loosen policy have seen their currencies appreciate recently. We learn that from looking at the market’s reaction to the “shadow” policy rates.

“Shadow” policy rates are a way of quantifying the impact of extraordinary monetary policy measures, such as quantitative easing, to make them comparable across countries. They convert the impact of such measures on the yield curve into a figure equivalent to policy rates at the level necessary to cause a similar effect. They are therefore a better way of comparing various countries’ monetary policies than simply looking at the policy rate once the policy rates have hit the lower bound. The data are calculated by Leo Krippner, a researcher at the Reserve Bank of New Zealand, and published on his website, LJK Macro Finance Analysis. 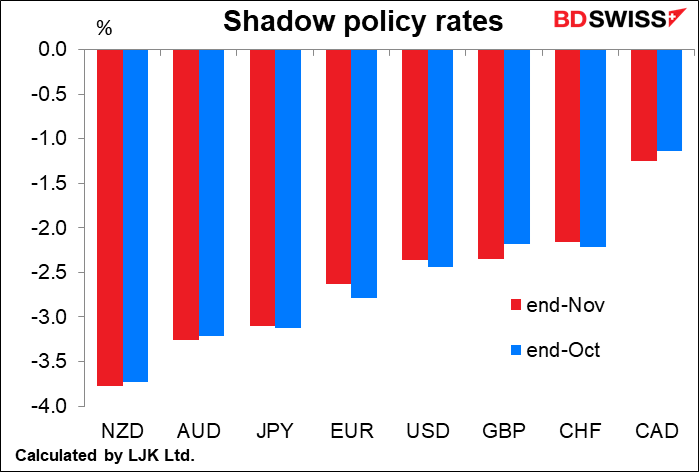 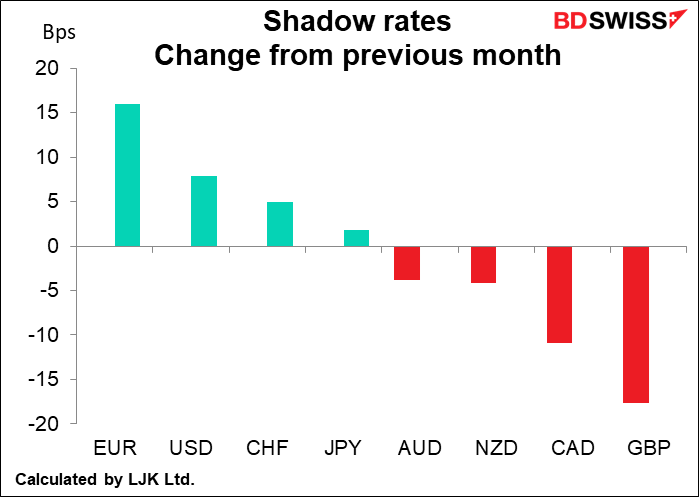 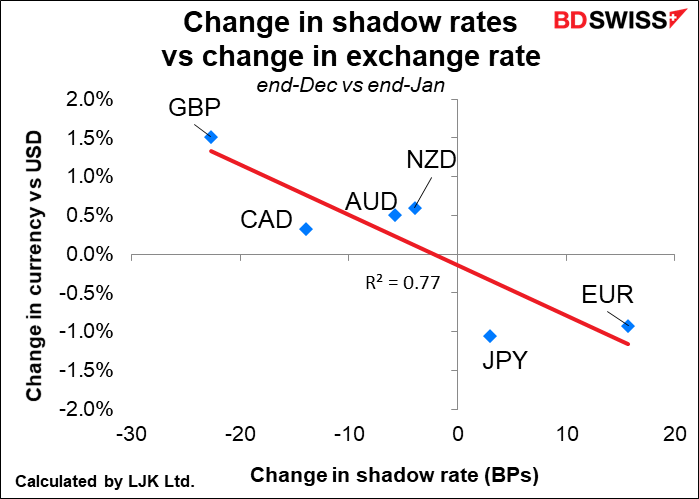 GBP may be an outlier thanks to the conclusion of the Brexit negotiations. With the others though, it looks to me that with rates at zero, currency markets are not cueing off interest rate differentials so much as they are potential growth differentials. In this context, a loosening of policy can be interpreted as spurring future growth, which would then be beneficial for the currency.

In that respect, the RBA’s confidence in the country’s recovery should boost AUD, in my view.

Wait to see what Gov. Lowe has to say overnight in his “Year Ahead” speech. In 2019 this speech was more important than the RBA statement that preceded it. I think he’s likely to take an upbeat approach to the economy and AUD may well recover as a result. We also have to see the details of the new, upgraded forecasts when the Statement on Monetary Policy is released on Friday.

The first thing on the schedule is the Eurozone Q4 GDP. The market consensus is for -0.9%, but the economists don’t have the benefit of the German, French and Spanish GDP figures when they make their forecast. I do. Those three countries explain about 96% of the variation in Eurozone GDP, so we should be able to make a fairly good forecast once we know them. My model (the results of which are shown below) suggests Q4 is likely to be -0.4% qoq, which would be better than the market consensus of -0.9% qoq.

However I can assure you that most stockbroking firms are going to have their morning calls in which the research department gives their daily view to the sales force and traders, and they’ve all done the same quick calculation I did and announced what they expect, so the “market consensus” forecast given in my table above probably is no longer the consensus. 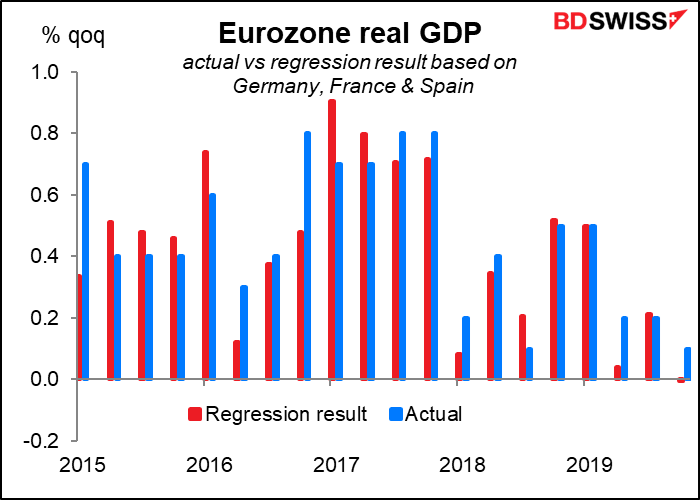 After that, no indicators until the Asian day begins in Wellington and we get New Zealand employment data. The Reserve Bank of New Zealand (RBNZ) has a formal dual mandate (inflation and employment) so this is a key figure for the kiwi. Employment is expected to be up slightly after some restrictions on mobility were removed, but that may also cause a rise in the unemployment rate as discouraged workers come back into the labor force. Watch the participation rate then to see if the rise in unemployment is a good thing or a bad thing. I think even a slight rise in employment coupled with a rise in the participation rate could convince the RBNZ that the situation is stabilized and there’s less need to loosen further, which could be bullish for NZD. 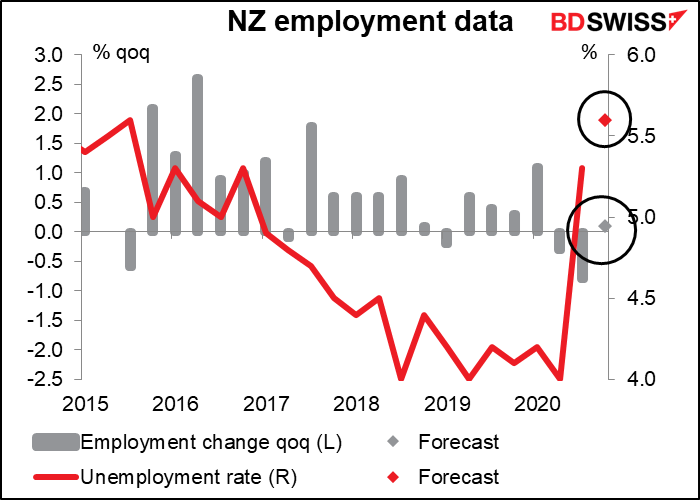 Australian building approvals are forecast to rise slightly, but this follows three months of fairly healthy rises, demonstrating the success of the government’s HomeBuilder scheme, which provides eligible owner-occupiers with a grant to build a new home or substantially renovate an existing home. The success of such programs makes it less necessary to cut rates to support the economy and is therefore positive for AUD. 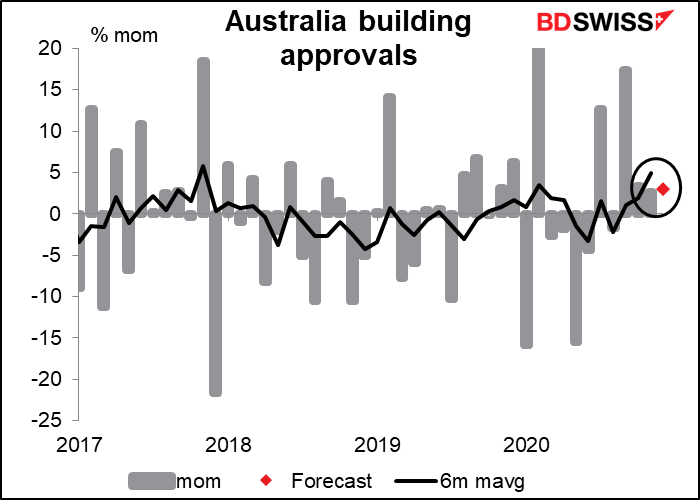 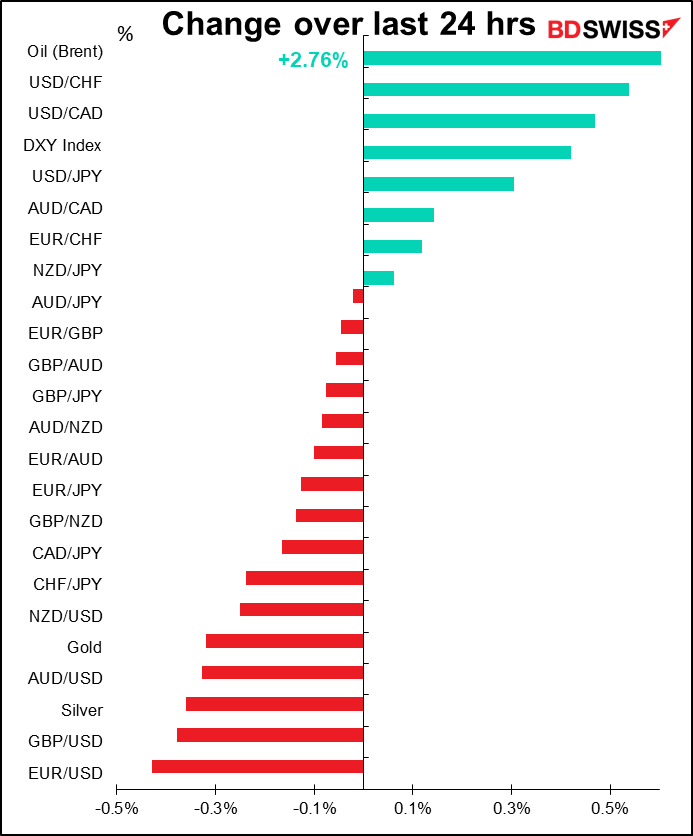