NEW YORK, Dec 10 (Reuters) - Wall Street advanced on Friday and the S&P 500 notched an all-time closing high, as market participants digested an inflation reading that was in line with consensus, but also marked the largest annual increase in consumer prices in nearly four decades.

The indexes all ended the session higher than last Friday's close, and the benchmark S&P 500 posted its biggest weekly percentage advance since the week ended Feb. 5, as waning jitters over the Omicron coronavirus variant helped fuel a broad rally early in the week.

A report from the Labor Department showed consumer prices surged last month to a 6.8% annual growth rate, the highest reading in more than 39 years.

"It would appear that today’s reaction would indicate the markets were discounting the (CPI) reading," said Chuck Carlson, chief executive officer at Horizon Investment Services in Hammond, Indiana. "The markets are always looking forward and perhaps today's reading is indicative of a peak versus a sustained level."

Persistent inflation due to ongoing supply-chain challenges suggests the U.S. Federal Reserve could very well start tightening its accommodative monetary policy sooner than many might have hoped.

"Clearly, it’s being driven primarily by supply-chain issues," Said Tim Ghriskey, senior portfolio strategist at Inverness Counsel in New York. "But it appears these issues could be easing, and over time we should see them moderate. And that should take the foot off the inflation accelerator."

A Reuters poll of economists sees the central bank hiking key interest rates from near zero to 0.25-0.50% in the third quarter of next year, followed by another in the fourth quarter.

The Fed is expected to convene next week for its two-day monetary policy meeting, which market participants will be scrutinizing for any clues regarding those rate increases along with the pace at which it will taper its bond purchases.

"The Fed is has telegraphed on tightening sooner rather than later," Carlson added. "The markets are more comfortable with Fed tightening if it reduces inflation expectations."

A street sign for Wall Street is seen in the financial district in New York, U.S., November 8, 2021. REUTERS/Brendan McDermid

The graphic below shows core CPI along with other major U.S. indicators, all of which continue to soar well above the Fed's average annual 2% inflation target: 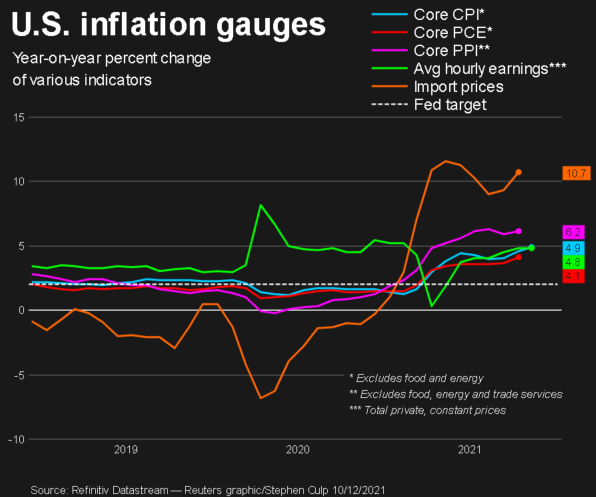 All 11 major sectors in the S&P 500 ended the session green, with technology and consumer staples enjoying the largest percentage jumps.

Elon Musk, chief executive of Tesla Inc, tweeted that he is "thinking of quitting my jobs & becoming an influencer full-time." The electric car maker's stock advanced 1.3%.

Declining issues outnumbered advancing ones on the NYSE by a 1.05-to-1 ratio; on Nasdaq, a 1.48-to-1 ratio favored decliners.

Volume on U.S. exchanges was 9.60 billion shares, compared with the 11.42 billion average over the last 20 trading days.