Declines were led by megacap tech-related stocks, with Salesforce.com, Microsoft Corp, Adobe and Alphabet Inc (GOOGL.O) pulling down the S&P 500 and Nasdaq.

Apple Inc (AAPL.O)ended down 0.8%, but off its session lows, after the iPhone maker said it would require customers and employees to wear masks at its U.S. retail stores as COVID-19 cases surge.

Data from the Labor Department showed the producer price index (PPI) for final demand in the 12 months through November shot up 9.6%, clocking its largest gain since November 2010. That followed an 8.8% increase in October. read more

About two-thirds of Nasdaq stocks traded below their 200-day moving average, according to Refinitiv data, suggesting many stocks within the index are struggling, even as the overall index remains only about 6% below its November record high close.

"COVID plus inflation is the Grinch that stole Christmas," said Jake Dollarhide, chief executive officer at Longbow Asset Management. "I don’t underestimate the fact that there are some big Nasdaq names giving up some of their big gains. When the leaders sell off, it's not a good sign."

Ten of the 11 major S&P 500 sector indexes fell, with tech (.SPLRCT) putting on the worst performance, down 1.6%. Financials (.SPSY) gained 0.6% as investors bet on a hawkish tone from the Fed at the end of its two-day meeting on Wednesday. read more

Berkshire Hathaway (BRKa.N), and Bank of America (BAC.N) both gained more than 1% and helped keep the S&P 500 from falling further.

Many investors expect the U.S. central bank to signal a faster wind-down of asset purchases, and thus, a quicker start to interest rate hikes in order to contain the rapid rise in prices.

"I would say this meeting is when we start to get some clarity on how they're (the Fed) going to address this idea of inflation that has remained elevated and most likely will remain an issue going into next year," said David Keller, chief market strategist at StockCharts.com.

A Reuters poll of economists sees the central bank hiking interest rates from near zero to 0.25%-0.50% in the third quarter of next year, followed by another in the fourth quarter. read more 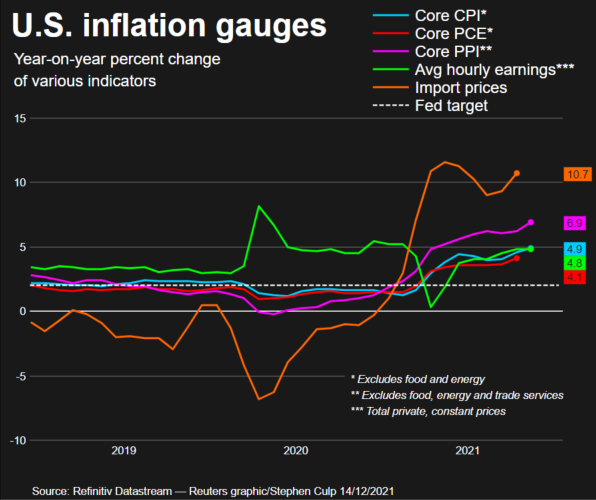 Pfizer (PFE.N) gained 0.6% after saying its antiviral COVID-19 pill showed near 90% efficacy in preventing hospitalizations and deaths in high-risk patients, and that lab data suggests the drug retains its effectiveness against the Omicron variant. read more

Declining issues outnumbered advancing ones on the NYSE by a 2.70-to-1 ratio; on Nasdaq, a 2.59-to-1 ratio favored decliners.

Volume on U.S. exchanges was 10.8 billion shares, compared with the 11.5 billion average over the last 20 trading days.