The EURUSD pair landed in the red On Tuesday, March 16, shedding 0.19% to 1.1901. The euro fell to 1.1914 during the Asian session. The single currency dropped in tandem with the British pound, but decreased less against the dollar. Sterling retreated after the European Commission filed a lawsuit against the UK for allegedly breaching the Brexit agreement protocol on Northern Ireland.

Since the European opening, EURUSD has recovered on the back of upbeat macro data out of Germany and the Eurozone. According to Germany’s ZEW business sentiment index, the March reading came in at 76.6 compared to 71.2 in the previous month (vs.  74.0 expected), while the Eurozone indicator reached 74.0, up from February’s 69.6 (vs. the 72.0 forecast)

After reaching 1.1952, the price action turned sharply lower. During the North American session, the euro dropped 0.58% against the greenback to 1.1883, and 0.94% against sterling to 0.8559. The euro’s decline could be due to major hurdles in vaccine deliveries to the Eurozone, as well as the suspension of the AstraZeneca vaccine in Germany, France, Italy, Spain and several other countries due to reports of serious side effects. 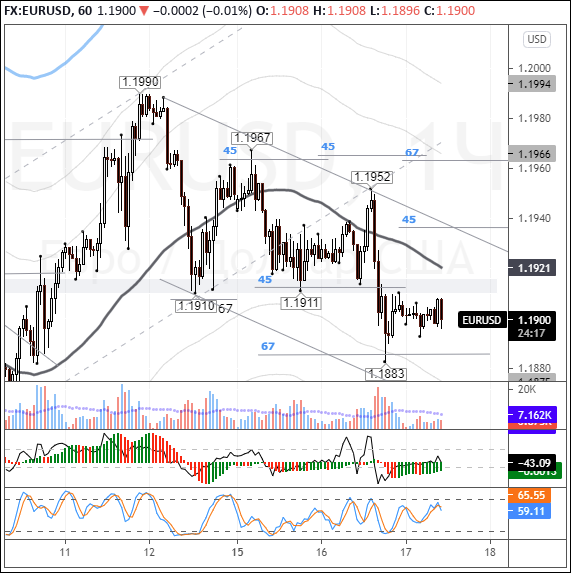 The single currency remains under pressure against the pound as the price action closed in on the key support at 0.8555. If buyers fail to hold that level, the EURUSD pair will face a new wave of selling.

The focus remains on the FOMC meeting. Today, the Committee needs to convey the message that the regulator will not tighten monetary policy despite growing inflation due to stimulus packages and investors' concern in this regard.

Major currencies are currently trading in the red, except for cable (support from the EURGBP cross). At the time of writing, the euro was trading at 1.1896. After sliding to 1.1883, the key pair recovered 38%. The single currency is on the back foot due to a decline in the major EURGBP cross. However, other crosses are preventing a deep decline.

Uncertainty will prevail on the market until Powell's speech. If the Fed Chairman reassures investors and US10Y yields fall, then the euro could retrace to 1.1930. Otherwise, we should expect a leg down to the range of 1.1831 (112-degree angle) -1.1861.