The EURUSD pair closed higher on Monday, May 31, up 0.26% to 1.2224. Trading volumes were subdued as the US and UK markets were offline. Memorial Day was celebrated in United States, while the United Kingdom was closed in observance of the May Bank Holiday.

The single currency pair traded for 17 hours in the range of 1.2183-1.2205. The market was thin during the North American session, with the price action moving to 1.2228 in one hour. There was no news flow driving these gains. Most likely, traders decided to adjust their positions on the last day of the month. 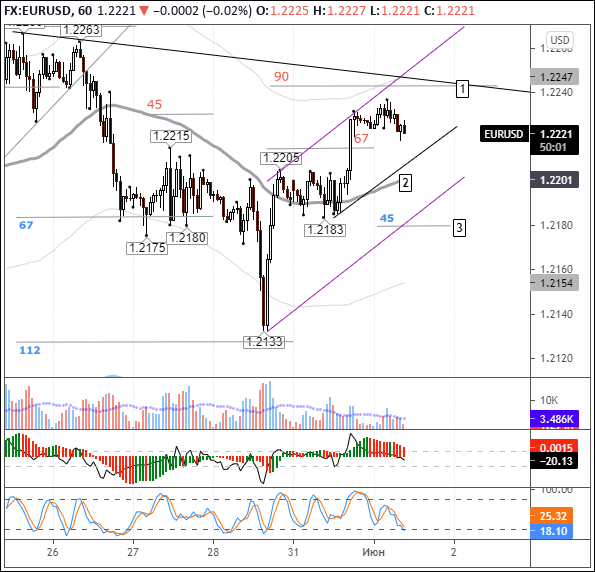 At the time of writing, the euro was changing hands at 1.2221. Major currencies are trading in positive territory, except for the franc. Today’s leader board is topped by the Australian dollar, which in Asia has been driving the entire market. The aussie started trading higher against the USD after macro data came out of China and Australia.

On the macro data front, China’s Caixin Manufacturing PMI in May came in at 52.0, vs. previous 51.9, and slightly ahead of the 51.9 consensus forecast.

In addition, Australia’s AIG Performance Manufacturing in May reached 61.8, up from the prior 61.7. The Markit Manufacturing PMI surged to 60.4 in May, ahead of 59.7 in the previous month. Australia's manufacturing sector continued to expand at a record pace in May, propelled by strong demand driving production growth.

Major currencies have been on an upward trajectory this morning, but there is a key signal that points to their weakening. Yesterday, UST bonds did not trade due to the Memorial Day holiday. Today, the 10-year note yield jumped to 1.618%. Rising yields are supporting the dollar. If the 10Y yield continues to widen, buyers may start to take profit in major currencies at a certain point.

The technical picture on the hourly TF shifted from bullish to neutral due to yesterday's gains. Given the rise in US10Y, we would advise FX players to stick to the sidelines until the North American trading session gets under way. If the euro holds above 1.2200, then a leg higher could be in the cards.

Manufacturing PMIs are due out during the European session on Tuesday. Later in the day, the ISM Manufacturing PMI will come out stateside, with the reading expected to improve to 61 in May from 60.7 in April. Also today, OPEC will announce its oil production quotas for H2 2021. This is a key decision for commodity currencies.

Bottom line: the euro bounced back to 1.2205 after Friday's US macro releases. EURUSD rose to 1.2231 on Monday amid a thin market. In Asian trading, buyers pushed the price action to a high of 1.2236 on the back of positive economic data out of China and Australia. This morning, major currencies have appreciated against the dollar as 10-year UST yields widened. Higher yields are a bearish signal for the euro. A further uptick in Treasury yields poses the risk of a drop to 1.2205 before the single currency retraces to its May 25 high of 1.2266.