The EURUSD pair dipped 0.08% to $1.1870 on Monday, September 6. During the first half of the trading session, price action dropped to 1.1856, and during the second half it retraced to 1.1872. Volumes were low-key due to the Labor Day holiday in the US and Canada.

APAC trading got off to a strong start. Risk-sensitive assets saw robust gains, all of which were pared before the Reserve Bank of Australia’s (RBA) policy decision. The regulator left its cash rate unchanged at 0.10%. AUDUSD surged 28 pips to 0.7469 and then slid 57 pips to 0.7412. The upside move lasted three minutes, the downside move – 36 minutes.

Market participants expected the RBA to scrap plans to taper bond purchases, whereas Australia's central bank said it would buy AUD 4.0 bln in government bonds per week at least until mid-February 2022.

That said, comments on the interest rate decision were gloomy as the regulator expects GDP to contract in Q3 due to containment measures caused by the Delta virus.

US and Canadian traders are expected to return today. As for the macro highlights, traders are advised to watch for the ZEW indices in Germany and Eurozone Q2 GDP.

By the time of writing, the euro was trading at 1.1869. The key pair rose to 1.1886 and then tracked the Australian dollar downward. Major currencies were trading in positive territory ahead of the RBA meeting. After the meeting, all currencies sank into the red.

Buyers had excellent technical conditions for a rebound to 1.1890 on Monday and this morning. Market sentiment shifted due to a pullback in the aussie dollar. Sellers breached the trendline from the 1.1735 low. The risk of a deep correction has increased, as a reversal price pattern is shaping up on the hourly DXY TF.

Looking ahead, FX players should watch for the ECB meeting scheduled for Thursday after which Christine Lagarde will hold a press conference. If buyers manage to defend the 1.1855 level, they will have another shot at the 1.1900 handle.

As regards the Australian dollar, a double top has formed on the hourly TF. The market now awaits the return of US investors and in the meantime, we would advise FX market partici0ants to monitor the dynamics of global equity indices and US Treasury yields. According to the latest data, 10-year Treasury yields rose to 1.353%. The DXY is trading near the 92.30 resistance level. After that, the next upside target will be 92.50.

Bottom line: US stock exchanges were closed for Labor Day on Monday. The single currency closed slightly in the red amid low activity and subdued volumes. In Asian trading on Tuesday, price action rose to 1.1886 and fell to 1.1863 tracking the aussie dollar after the RBA policy meeting. The bullish trend remains in play, but a sell-side bias has emerged. If the 1.1855 level fails to hold, we should expect a decline to 1.1835. 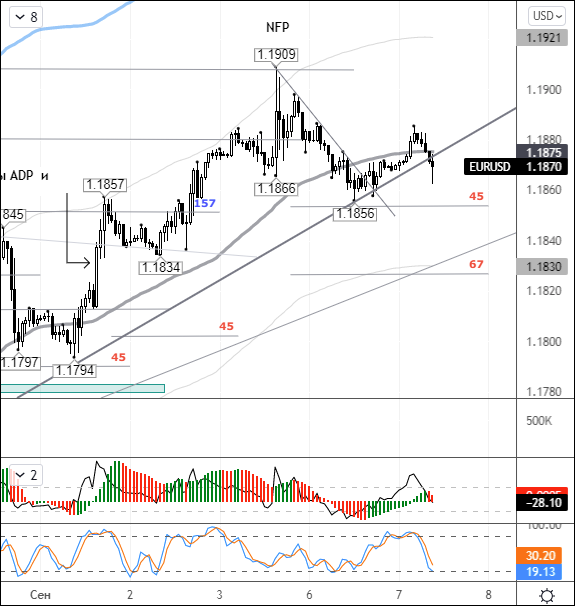