EURUSD retraces to upper bound of side trend

The EURUSD pair rose 0.36% to 1.1367 on Tuesday, January 11. The gains started during the Asian session and were capped by a decline in the EURGBP cross during the European session. The key pair dropped to 1.1285 ahead of Fed Chaiman Powell’s testimony before the US Senate Banking Committee.

Investors were upbeat about the lack of surprises in Powell's speech. He said that he was determined to battle inflation, and it would take two to four meetings to decide on the balance sheet runoff. The Fed Chair allayed fears that the central bank would be overly aggressive in shrinking its huge balance sheet.

By the time of writing, the single currency was trading at 1.1371. Major currencies are trading in positive territory, except for the yen and franc. The demand for risk-sensitive currencies remains. Price action is at the upper end of the 1.1230-1.1385 side trend. Today’s highlight is US CPI data, which could push the euro back down to 1.1300. Heightened volatility is expected for major pairs following the release. If buyers hold the 1.1350 level until Thursday, by the end of the week the price is expected to break out of the 1.5-month range and test the 1.1450 level.

Bottom line: The single currency closed higher on Tuesday. The key pair got a boost from Fed Chair Powell’s testimony before the Senate Banking Committee. His speech and Q&A session caused UST yields and the DXY index to retreat. Today, all eyes will be on the US consumer inflation report for December. The report is one of the Fed’s preferred gauges. Heightened volatility can be expected in the wake of this release. 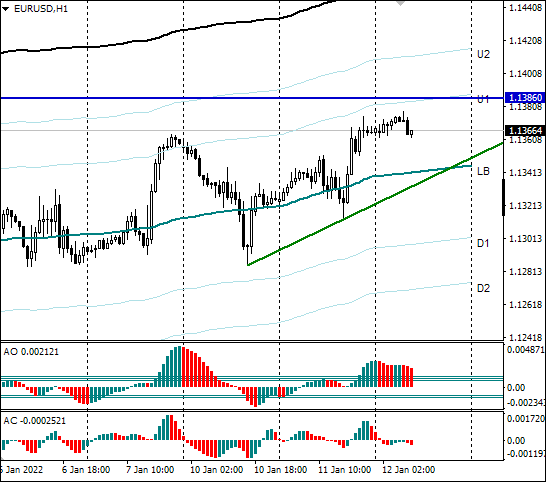